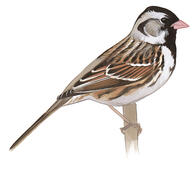 There was some tough news for us humans to hear in 2019. A large international research effort showed there are now a million species in danger of extinction. Ornithologists published new findings documenting that there are now nearly three billion fewer birds in North America than there were forty years ago while entomologists discovered broad declines in insects. And just this fall, Audubon released a major new report on the impacts of climate change on birds with the sobering news that two-thirds of North American birds could be at risk of extinction from climate change impacts without major action to reduce carbon emissions.

Fortunately, there are also many people who have heeded these warnings about the health of our environment. Those people, working at all levels—from the home to local, regional, national, and international—are diligently developing and enacting solutions.

Across Canada’s Boreal Forest region, we saw a fountain of good news for the environment.

In August, the Lutsel K’e Dene First Nation, after more than a decade of work, finalized the creation of the Thaidene Nene Indigenous Protected Area in partnership with the Government of Canada and the Government of the Northwest Territories. Thaidene Nene’s six million acres host ten million or more breeding birds, including Black Scoters, Harris’s Sparrows, Smith’s Longspurs, and Blackpoll Warblers.

Also in the Northwest Territories, the Ts'ude Niline Tu'eyeta Indigenous Protected and Conserved Area is in the final stages of protecting the 2.5 million acre Ramparts River watershed. This watershed has massive wetland complexes that have long been important hunting, fishing, and gathering grounds for the K'asho Got'ine people. The area supports both mountain and boreal populations of woodland caribou, the former being a species of special concern and the latter listed as threatened under the Canadian Species at Risk Act. Additional species of special concern that rely heavily on the region include Peregrine Falcon, wolverine (western population), and grizzly bear (northwestern population), demonstrating the region’s importance in retaining healthy populations of a number of Canada’s species facing population declines.

Enormous concentrations of waterfowl converge upon this intricate mosaic of tree stands and open wetlands each spring and early summer. This congregation includes large populations of Surf and White-winged Scoters as well as both Greater and Lesser Scaup, the latter being species of conservation concern, given their long-term population declines. Several species are particularly dependent on the region. At least one percent of the entire Canadian population of Scaup, Scoters, and Pacific Loons breed in just this area alone, which qualifies it as a Key Habitat Site.

In the Yukon, the final land-use plan for the 16-million-acre Peel River Watershed was approved in 2019, requiring 13.8 million acres of new protected areas be formally established in coming years. The region supports millions of birds, including White-winged Scoter, Green-winged Teal, Peregrine Falcons, Gyrfalcons, Bald Eagles, and Golden Eagles. Range-restricted mammals like the mountainous Dall's sheep, the singular singing vole, and the collared pika occur within the watershed.

The region serves as the wintering grounds for the iconic Porcupine caribou herd—a transboundary herd of barren-ground caribou that summers in Alaska’s Arctic National Wildlife Refuge—and is the home of Yukon’s only population of boreal woodland caribou. Healthy populations of grizzly bears, wolverines, and wolves occur here as well. Fish such as broad whitefish, least cisco, arctic cisco, and inconnu swim upstream from the Arctic Ocean to the Peel Watershed to spawn.

It’s hard not to be optimistic when conservation gains of such immense scale have occurred just in one year alone. The coming year has the promise of even more—and bigger—good news.

But that good news will come only if all of us keep maintaining support for the incredible efforts of Indigenous governments and communities across the boreal forest. As we end 2019 and look forward to 2020, let us thank those among us who have continued to work tirelessly to enact solutions that match the scale needed to bring balance back to our relationship with the environment.