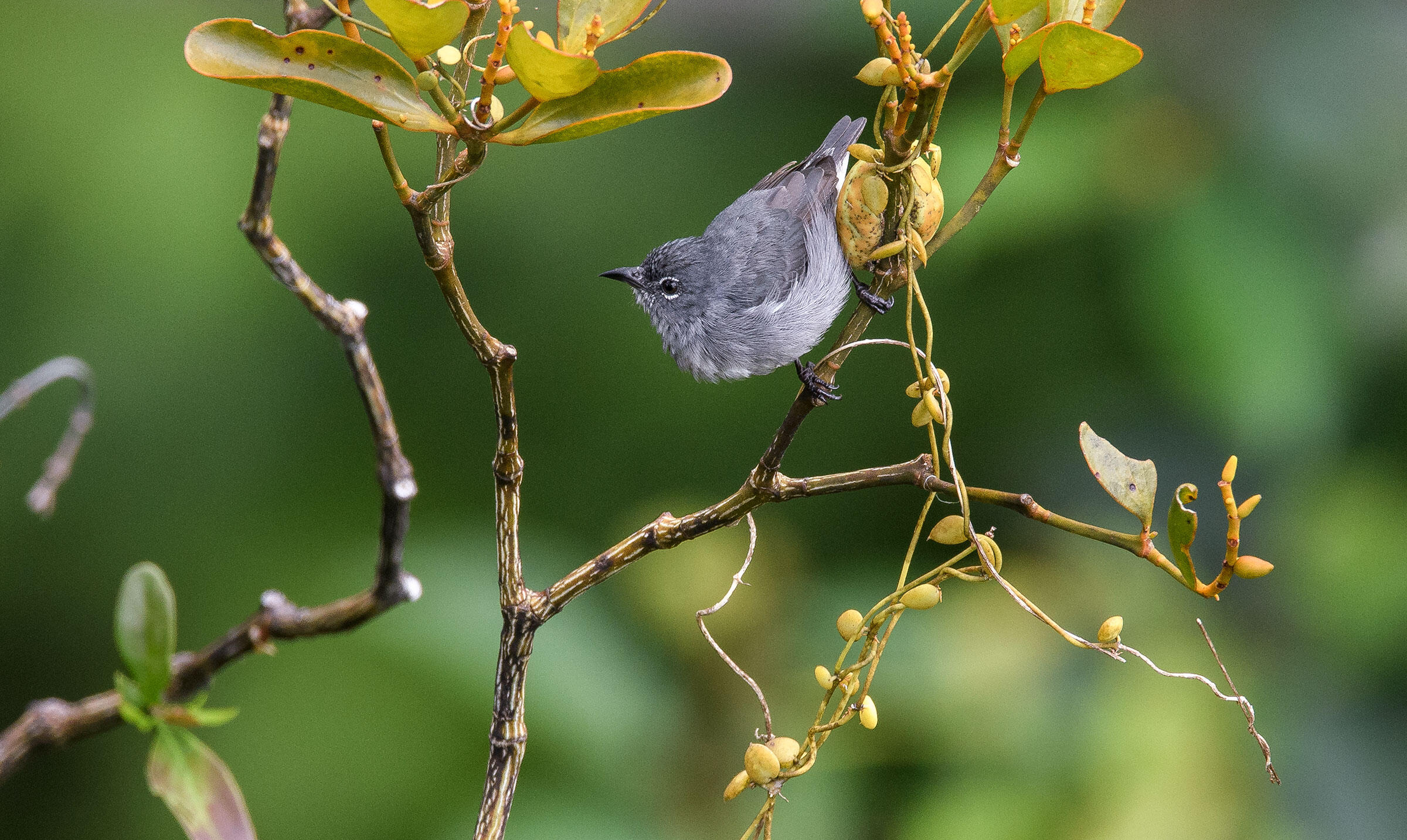 Borneo's Elusive Spectacled Flowerpecker Is No Longer a Mystery

After a decade since its first sighing, the bird has finally been formally described as a new species, but much remains unknown about its ecology.

It was another sunny spring day in Borneo’s Lanjak Entimau Wildlife Sanctuary. Surrounded by tall canopy rainforest and thick fern understory, Chris Milensky and Jacob Saucier, researchers from the Smithsonian’s National Museum of Natural History, were spending the morning identifying the day’s first batch of birds.

The pair were halfway into a two-week stay to conduct a bird diversity survey of the area. Every day, field assistants on their team would set up mist nets and gather the caught birds, delicately placing each individual into a bag to bring back to the research base where Milensky and Saucier would then record the species. This had been the group's routine for the past week, but on this day, the team was in for a shock.

“We were looking in the bags to see what had been caught, and we noticed this bird,” Milensky says. “I was the one who first opened the bag, and when I saw it, I closed it right back up. I had seen pictures of it in the field guides and was pretty sure of what it was right away.”

What Milensky glimpsed in the bag was a tiny, gray bird with white arcs around its eyes—the Spectacled Flowerpecker. While the bird isn't nearly as colorful or embellished as many of the avian specialties found in Borneo's rainforests, the unassuming flowerpecker is extraordinary in a different way: It's been suspected of being a new species to science since first being identified in 2009. And yet, for the past decade, the mysterious bird has remained stubbornly elusive. It's only been spotted a handful of times and has evaded scientists hoping to capture a specimen for scientific study.

That all changed on March 31. After the initial surprise of what was in the bag wore off, Milensky and Saucier had an unexpected decision to make: to take the bird, or kill it for study as is normal scientific practice, or to sample its DNA and release it with the other birds. Understanding the importance of having a specimen, they took the bird and got to work studying its genetic make-up to confirm that it is, indeed, a new avian species—the first in Borneo in more than a century.

Last month, Milenksy and Saucier published their long-awaited description of the bird in a paper while also announcing its scientific name, Dicaeum dayakorum. Through genetic analysis, they were not only able to confirm that the Spectacled Flowerpecker is a new species, but also found that it is completely distinct from any other flowerpecker in Borneo, occupying its own branch on the family tree.

“A lot of the times people assume that we’ve found most everything, especially with something as well studied as birds,” Saucier says. “But this shows that you can have a totally different species, or an entire branch of the tree of life that we haven’t discovered yet. Who knows what else is sitting out there in the lowland tropical forests that we haven’t come across yet.”

The fact that the Spectacled Flowerpecker is distinct from Borneo's other flowerpeckers signifies that the bird is a “relic” species and thus must have been around longer than its relatives in the region, says Quentin Phillipps, co-author of Phillipps’ Guide to the Birds of Borneo. “The DNA is saying that it’s got a more ancient history than the other flowerpeckers, but exactly how much would be difficult to quantify.”

Considering the long history of exploration in Borneo, it's remarkable that the Spectacled Flowerpecker has evaded identification until now. Milensky cites the bird’s “detectability” as the reason for its elusiveness. Not only is it tiny and its plumage plain, but it also has a nondescript song and seems to live exclusively in the high canopy of Borneo’s lowland tropical forests. All these factors make the bird difficult to spot, and the scant few previous sightings have taken place mostly on elevated canopy walkways.

Saucier says that the team was extremely lucky to have encountered the canopy specialist in their mist net, which was staked into the forest floor.

Saucier says that the team was extremely lucky to have encountered the canopy specialist in their mist net, which was staked into the forest floor. "It's so unusual, so we tried to make the most of it to fill in gaps in the knowledge of this bird," he says.

Although taking a rare species can spur public controversy, the practice is still widely considered necessary by ornitholosts and other scientists for reasons beyond the formal description. "If you go back to the original report of the first sighting, and all subsequent sightings, they all stressed the need for a voucher specimen," Saucier says. "It’s one of those things where the lack of a specimen is the only thing holding back protection. It’s hard to convince people to set aside habitat for this bird if it’s not proven that it’s a new species."

One aspect that often influences the decision of specimen collection is the species' population status. For the Spectacled Flowerpecker, this is still unknown. The locations of previous sightings suggest that the species is widespread among Borneo's extensive lowlands, but its elusiveness indicates that it has low population densities.

Despite this recent achievement in scientific description, there is still a lot left to learn about the Spectacled Flowerpecker, such as its movement and foraging habits. The specimen supported previous suspicions that the bird is a mistletoe specialist (mistletoe seeds were found in its lower large intestine, and parts of a small jumping spider in its stomach), but Milensky and Saucier are still curious about the degree to which the bird is dependent on mistletoe. Phillipps says the next step for researchers is to spend months up in the canopy observing the birds’ lifestyle.

Hanyrol H. Ahmad Sah, who has been studying the bird in Brunei since 2017, says she is eager to continue building on her observations of the Spectacled Flowerpecker’s interactions with mistletoe, and hopes to map out the plant's distribution in Borneo. "Then we might know more about the home ranges of the bird," she says.

Being in the right place at the right time largely contributed to the team’s success in identifying the species, but Milensky and Saucier also recognize the essential role of the Dayaks, a people indigenous to Borneo's lowland forests and who play an important part in its conservation. To honor the native community, the team decided to name the species Dicaeum dayakorum. “It’s a mutual relationship,” Saucier says. “They depend on forest and forest depends on them.”

The Borneo lowland forests have been under increasing threat in recent decades due to unsustainable agricultural practices, with palm oil and illegal logging being two main causes of forest loss in the region. Milensky and Saucier hope that with the formal identification of the Spectacled Flowerpecker, researchers and conservationists now have more legitimacy for studying and protecting the bird and its habitat.

“We’re optimistic about what this could mean for conservation in Borneo,” Saucier says. “We hope that formally describing this little bird and being able to introduce it to the entire world can demonstrate the environmental significance of this forest and areas of future discovery.”

High Up in the Borneo Canopy, a Likely New Bird Species Lurks

The Spectacled Flowerpecker has been eluding experts for nearly a decade. Now, scientists have a bold new plan to reveal its true identity.

Why I Collected a Moustached Kingfisher

The field biologist who has spent 20 years working in the Solomon Islands explains the reasoning behind his decision.