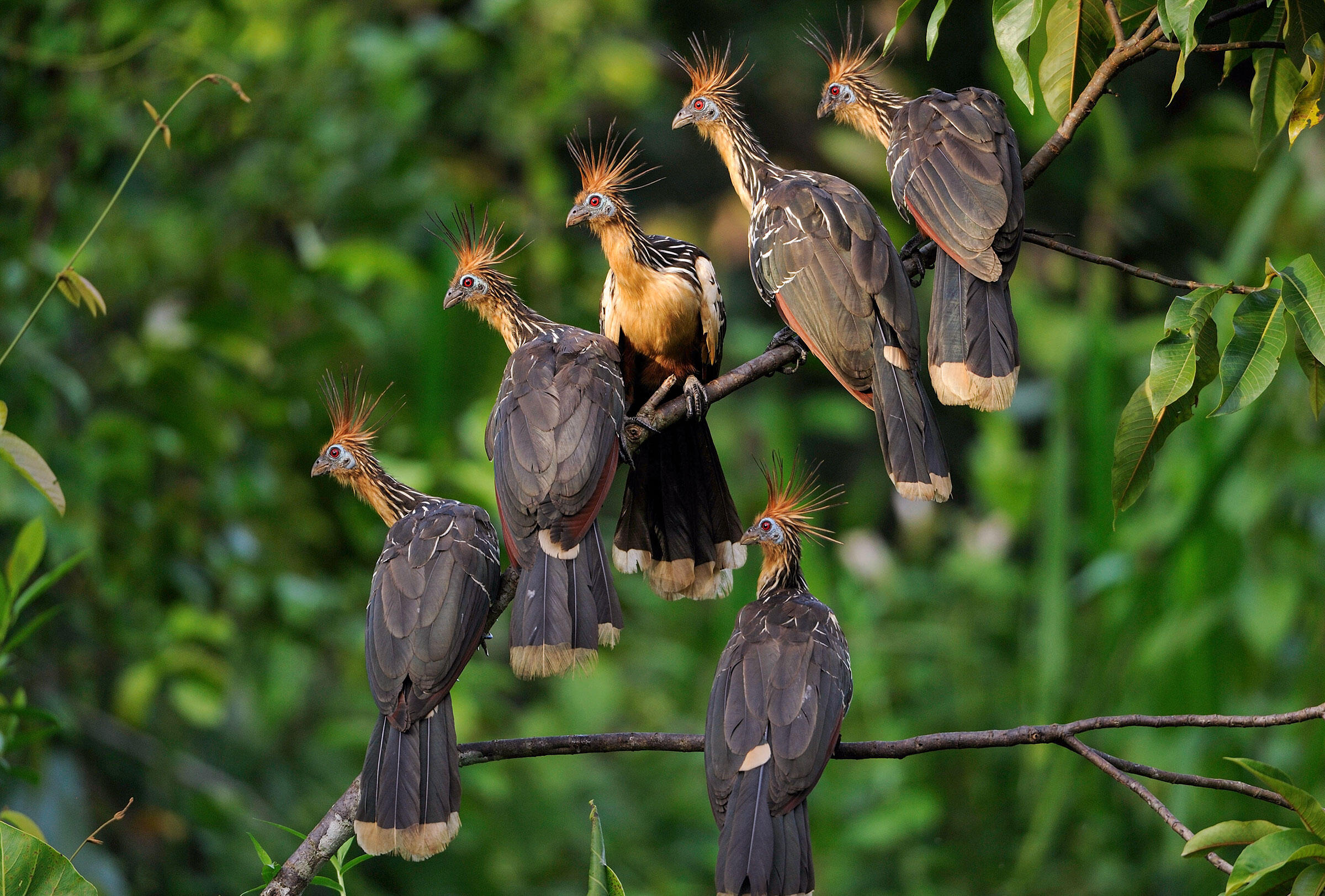 Around a decade ago, Danielle Whittaker walked into her laboratory with a Brown-headed Cowbird in a brown paper bag. Whittaker is an evolutionary biologist at Michigan State University who studies the role of smell in bird behavior. She sometimes uses bags to keep captured birds calm while she brings them into the lab for banding and data collection before releasing them.

Cowbirds lay their eggs in other species' nests, saddling other parents with the child-rearing responsibilities. Whittaker had a hunch that maybe they pull off that trick by not having much of a smell to give them away.

“As soon as I opened the bag there was this scent, and it was very much like cookies,” Whittaker says. “I thought somebody had cookies in the room. I was shoving the bag in everyone’s face, like, ‘Smell this bird!’ Which, it turns out, not everyone enjoys.”

Until surprisingly recently, conventional wisdom held that birds have little or no sense of smell. But in the past several years, researchers have overturned that misguided assumption. They’ve found that scents help some birds find food and avoid predators. And they’ve learned that the odors birds themselves produce are useful in selecting mates, identifying relatives, and distinguishing their nests from countless others in a colony.

“It’s a whole new way of thinking about how birds perceive their world that has been basically ignored for centuries,” says Julie Hagelin, a University of Alaska Fairbanks biologist who also studies smell’s role in bird behavior. “We just don’t understand it yet, and that’s exciting.”

There are no doubt lots of discoveries waiting to be made in this emerging area of ornithology. This past fall, for example, Whittaker published a paper showing that bacteria in the preen glands of Dark-eyed Juncos play a big role in determining the birds’ scents. (Juncos smell musty and not altogether pleasant, according to Whittaker. “I sniff all my birds now,” she says.)

One thing scientists in this young field have already learned: There are some wild smells out there. All birds likely have some odor—at least 177 avian species emit one that humans can detect, according to Hagelin’s research—but these ones are particularly pungent.

Hagelin’s fascination with avian funk began with a fat, flightless, nocturnal parrot. She was a volunteer in New Zealand with the recovery program for the critically endangered Kākāpō. One day that work involved holding one of the birds against her body while changing the battery in its tracking device. “The scent of this bird’s plumage rubbed off on my T-shirt, and I smelled like Kākāpō all day,” Hagelin says. She began wondering about what role that strong scent might play in the birds’ lives, and she’s been researching related questions ever since.

“Their feathers smell sort of sweet and musty,” she says. The odor is strong enough that, some mornings, while walking a dewy trail, her nose would pick up lingering evidence that a Kākāpō had waddled along the same path before sunrise. “To me it smells like a mix of lavender and honey and dust.”

Others have described the bird’s scent in similar terms. They’re like “musty violin cases,” one researcher told National Geographic. “Sweetish and vegetative,” researchers from New Zealand’s Massey University called it. And, as one of the Massey team noted in a 2012 thesis paper, poet Sonja Yelich even wrote an ode to their  aroma, which she described as “some honey, papaya & the inside of an old clarinet case which is spitty.”

For millennia, Kākāpō could strut around smelling like whatever section of the orchestra they pleased; the birds evolved without any mammalian predators to pick up the scent. But their strong odor helped to make the birds easy targets for introduced rats, cats, and other mammals, which played a big part in slashing the Kākāpō population to just 51 individuals in 1995, when the latest intensive recovery program began. Today there are around 200 birds living on three predator-free islands.

Pro tip: Do not threaten a Hoopoe nestling. When in danger, they’ll squirt a stream of feces at an invader in self-defense.

That’s not the only source of stink from these distinctive birds of Africa and Eurasia. The preen gland is where birds produce the oil they rub on themselves to keep their feathers clean and waterproof. But come breeding season, something weird happens to the preen glands of female Hoopoes and their nestlings: They swell up and produce what one book describes as “an evil-smelling fluid, with a stench like that of rotting meat.”

Scientists say this noisome goop likely serves to deter predators; Hagelin points out that decomposing flesh can contain dangerous microbes that some animals may avoid. The smelly fluid has another function that's been more firmly established: It contains beneficial bacteria which attack other bacteria that can eat away at feathers. Hoopoe moms-to-be also spread this stuff on their eggs, which helps seal small pits in the eggs to keep out microbial threats.

On top of that, Hoopoes are notorious for not cleaning out their nests, even though nestlings are known to plaster the walls in poop. No surprise, then, that a German insult is “stinken wie ein Wiedehopf”—to stink like a Hoopoe.

Some years after Hagelin washed the Kākāpō smell out of her clothes, she found herself on an inflatable research boat off the Alaska coast, where she was studying smell in Crested Auklets. A group of maybe 75 of the seabirds flew past, about 25 feet from the boat. That was close enough to get a big whiff. “It smelled like someone was peeling a tangerine right next to me,” Hagelin says.

As Audubon magazine has somewhat saucily reported, Crested Auklets have “wild and kinky mating rituals,” and their distinctive smell plays a big part in their “rambunctious sex parties.” When a female auklet takes an interest in a male suitor, “she buries her beak in the male’s neck feathers—where that fresh tangerine scent is strongest—in a move called a ‘ruff sniff.’”

Hagelin says she’s heard from Alaska Natives in her study area that it’s common to smell a flock or colony of Crested Auklets before seeing them. The rocky islands and outcrops the birds inhabit are often shrouded in thick fog, so Hagelin suspects scent might be an especially important communication channel for them, to compensate for low visibility.

In any case, the odor they’ve evolved could be a heck of a lot worse. “It’s really pleasant,” Hagelin says. “There are plenty of other scents in seabird colonies that are not as appealing.”

It’s fitting that Hoatzins smell funny, because everything about these Seussian weirdos is just a little bit strange. They nest above rivers and wetlands in the tropical lowland forests of South America, allowing their young to plop into the water below when in danger. The nestlings then climb a tree back to safety using bizarre claws on their wings that they lose as adults.

Hoatzins are pretty lousy at flying, so your first clue that there’s one nearby might be the sound of it flapping into bushes and branches. Another clue: a strong barnyard smell. Turns out, those two quirks are related. Hoatzins are weak flyers because they have an unusually small sternum, leaving little room for flight muscles attach to the skeleton. And that small sternum is designed to make space for an exceptionally large crop and esophagus, which, with help from gut bacteria, act as a fermentation chamber. They’re the only birds known to possess this odd digestive system, which helps them to break down tough and sometimes toxic plant matter, since their diet consists almost entirely of leaves. “Hoatzins in effect are flying cows,” the Cornell Lab of Ornithology says.

As in cattle, this “foregut fermentation” in Hoatzins produces methane, which they belch out, with an odor that’s been compared to that of cow manure. As a result, even dictionary editors—et tu, Merriam-Webster?—have dubbed this species the “stinkbird.”

Birds Can Smell, and One Scientist is Leading the Charge to Prove It

For more than a century nearly everyone believed birds sense of smell was poorly developed or nonexistent. They were wrong.