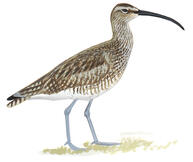 Late one evening under the midnight sun last June, Shiloh Schulte, a shorebird biologist with the nonprofit Manomet, trained his binoculars on a pair of Whimbrels foraging in the tundra at the Arctic National Wildlife Refuge. “They both suddenly started to alarm call and took off climbing rapidly,” Schulte says. He glanced skyward, locating the threat: a Gyrfalcon.

Seemingly from nowhere, four more Whimbrels, then eight, launched from the landscape toward the soaring predator. “This was remarkable because we had no idea at the time that there were that many Whimbrel in the area,” he says. The gang together vanquished their enemy before dropping back into their individual tundra turfs. “I was pretty excited when I got back to camp and was able to let the rest of the crew know that we had a large local population of Whimbrels,” Schulte says.

For the past four summers, Schulte’s team has visited Northern Alaska’s coastal plain to measure nest density and success rates of Arctic-breeding shorebirds, which journey from around the world to hatch and raise their young in this pond-riddled landscape, where insects needed by fast-growing chicks abound. The feast draws migrants from dozens of species—Semipalmated Sandpiper, Dunlin, American Golden-Plover, Red Phalarope, Red-necked Phalarope, and others—many of whose global populations are in serious decline. In addition to tracking nesting success, this summer Schulte planned to also find nesting hotspots and assess the impact of predators like Gyrfalcons and arctic foxes.

But those plans have been dashed. His team, like so many others, has called off their 2020 fieldwork due to COVID-19. The pandemic has heightened the risk of traveling to remote areas with limited medical facilities, he says. They also didn’t want to unwittingly introduce the disease to Alaska Native communities that live near the refuge. The decision to scrap the field season was easy to make but hard to swallow, Schulte says. “It’s a gut punch.”

The field-season cancellation has implications beyond Schulte’s research progress: It could also hurt potential protections for the Arctic Refuge’s coastal plain—a vital expanse of avian habitat that is set to be leased to oil companies in the coming year. The National Environmental Policy Act (NEPA) typically requires an environmental impact statement (EIS) before a development project like leasing or seismic exploration begins. Based on that statement, regulators can choose to spare ecologically significant parcels from development—ones that host endangered plants or polar bear dens or nesting birds, for example. An EIS has already been completed for the refuge in general, but future statements might be required. And while shorebirds are just “one piece of the overall picture,” Schulte says he wants to make as much avian data available as possible. “For those of us who are interested in birds and the larger environment in which they live, this is certainly something we want to have on the table.”

The Trump administration’s rapid push to lease portions of the Arctic Refuge to oil companies lends urgency to surveys like Schulte’s, says Rebecca McGuire, an avian ecologist with the Wildlife Conservation Society. She calls the pace of oil development in Northern Alaska “astounding,” especially given the low price of oil and recent job cuts in the industry. McGuire agrees with Schulte on the need for more shorebird data from the Arctic Refuge—and fast. “That information would inform those environmental impact statements,” McGuire says. “And it’s particularly critical right now given the rate at which development and deregulation are happening.”

What could be lost is knowledge of how oil development affects bird populations.

Other experts are more optimistic, saying the lack of shorebird data for 2020 won’t prove fatal for conservation prospects. Natalie Dawson, executive director of Audubon Alaska, acknowledges that some tracts of the Arctic Refuge have limited information about birds. “This survey would help fill in some of those gaps,” she says. But even without the study, Dawson is confident that conservation groups have enough other research to support their fight for protections. “We have a lot of science on the refuge,” she says. “That has helped with the NEPA process, and that will help with our lawsuit if we decide to sue over actions taken in the refuge.”

What could be lost, though, is knowledge of how oil development affects bird populations, if drilling efforts do begin this year. Richard Lanctot, a U.S. Fish and Wildlife Service biologist and one of Schulte’s collaborators, is afraid to repeat the same mistake made when Prudhoe Bay, an oilfield located around 100 miles from the refuge, was drilled in the 1980s. There, scientists are unable to identify the effects of oil development on shorebirds and their predators, he says, because there wasn’t enough data collected beforehand. For the Arctic Refuge, he hopes to paint a thorough before-and-after picture. “We have a unique opportunity here to gather data before any oil and gas development takes place,” Lanctot says. Losing the 2020 field season throws that goal into question.

How much to fret about the loss of this year’s shorebird data depends on whether the Trump administration’s expected progress toward drilling continues unabated, or if it’s waylaid by downstream effects of COVID-19 on the global oil supply.  The Trump administration originally planned to hold a lease sale in the Arctic Refuge this year. But before drilling, the government needs to conduct seismic surveys to map the belowground geology of the coastal plain, which will inform energy developers of where, and how much, oil might be within the region. These surveys, which have been delayed, also concern conservationists, as the heavy equipment they require can damage the refuge's sensitive tundra for decades.

Now, rock-bottom oil prices and uncertainty in the market may once again delay the process, according to Mike Scott, executive vice president of SAExploration, the company contracted to do the seismic survey. A supply glut, combined with tepid demand amid COVID-19 travel restrictions, sent oil prices spiraling toward, and briefly below, $0 per barrel—though in recent weeks they have risen some. Persistent low prices in the coming months could quash the global search for new oil fields. Scott is unsure about his company’s prospects to complete seismic testing this coming winter. “I don’t know,” he says. “It’s going to be dependent on commodity pricing.”

Seismic testing in the refuge is performed during winter to minimize damaging the landscape, so another delay could push lease sales in the protected area beyond their legal deadline. The 2017 tax bill approving Arctic Refuge drilling requires the Bureau of Land Management (BLM) to lease parts of the coastal plain for oil exploration by December 2021. But the BLM would likely recoup little government revenue if they sold leases now. Oil companies see few incentives to develop new oil fields with uncertain reservoir sizes, according to Kenneth Medlock, who directs the Center for Energy Studies at Rice University. “The government will be looking for sources of revenue as we emerge from the COVID-19 shutdown,” Medlock says, but “getting companies interested in bidding anything for at least the next couple of years may be another matter.”

BLM officials would not confirm whether they will hold Arctic Refuge lease sales in 2020. In an emailed statement, the Bureau’s assistant director, Nicholas Douglas, writes that providing specifics would be “too speculative on my part given the fluidity in the global oil market and the impetuous COVID-19 threat to our national health.” Then again, in a media interview on May 11, Interior Department Secretary David Bernhardt, who oversees BLM, told Bloomberg that he believes there will be a lease sale this year. “I don’t think the bidding would be driven by today’s prices,” Bernhardt said, while also acknowledging that prices and demand “could affect perhaps the universe of bidders.”

As for Schulte, he doesn't plan on letting COVID-19 completely stop him and his team from doing research this summer. Instead of tracking Whimbrels, phalaropes, and plovers across the Arctic Refuge, they plan to focus their efforts closer to home. “We’re looking at hopefully GPS-tagging some oystercatchers in Boston Harbor,” he says. Even amid quarantine and lockdowns, there's important conservation work that can still be done.