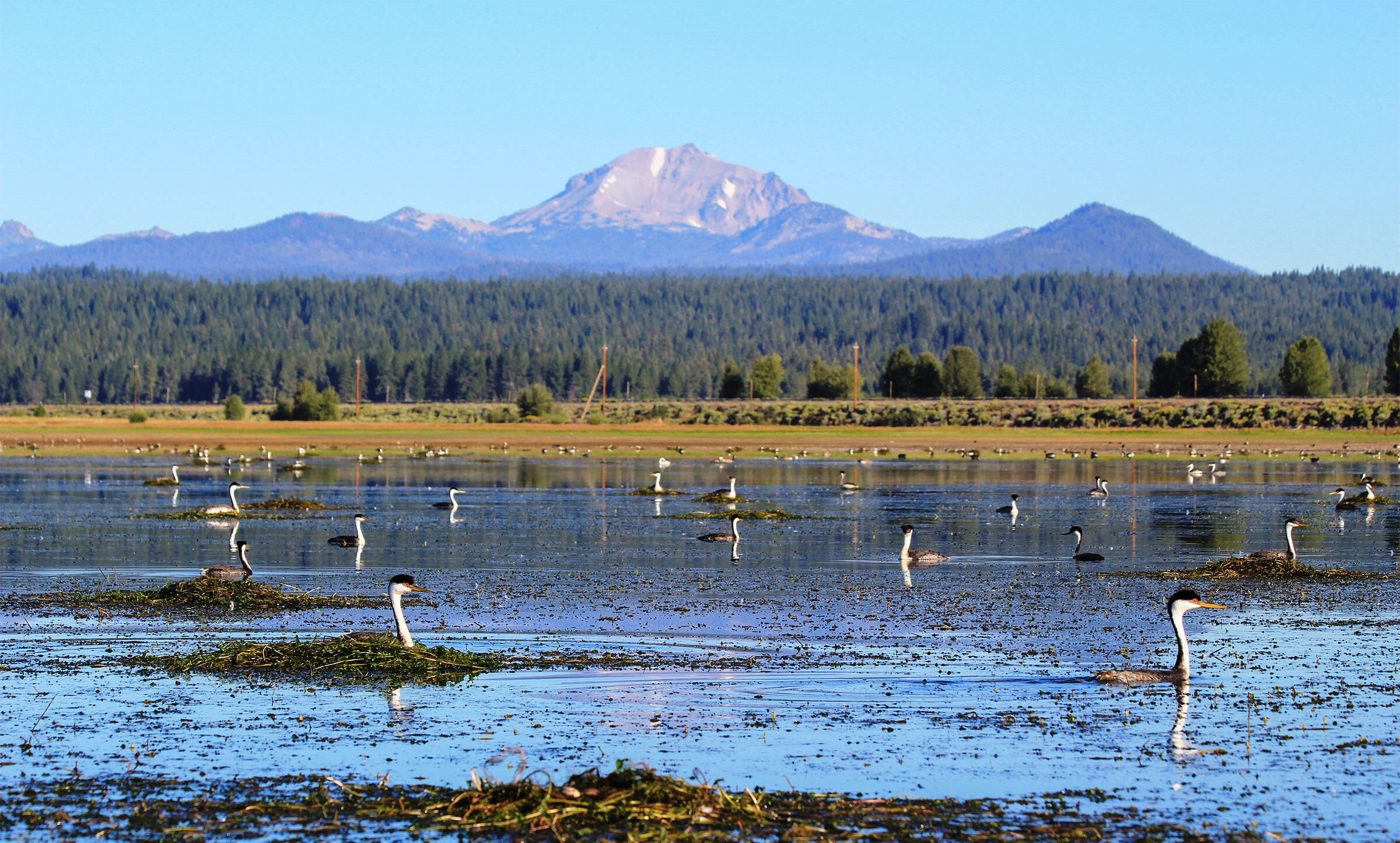 A colony of Western Grebes nesting on Lake Almanor in summer of 2018. The reservoir, which is located in Northern California's Plumas County, held more than 1,000 nests in July. By mid August, all had been abandoned. Photo: David Hamilton

Last summer ended in calamity for a nesting colony at PG&E's Lake Almanor. Now an Audubon chapter is fighting back to ensure that birds and locals get all the hydration they need.

Brad Graevs paused his kayak at the edge of a boisterous spectacle: thousands of frenzied Western Grebes, breeding, feeding, and krick-ing in the shallows of Lake Almanor. It was late July, the height of nesting season at the reservoir 160 miles north of Sacramento, California. The elegant birds slowly circled each other, heads bobbing, weeds dripping from their canary-colored bills. Graevs counted 1,184 active nests in total, a promising start to the season—or so he thought.

When Graevs returned to the reservoir on August 13, the entire colony had been abandoned. “It was just over . . . nothing left,” says the former grebe project manager for the Plumas Audubon Society.

The mystery didn’t take long to solve. In the days before the birds’ disappearance, the reservoir’s owner, the San Francisco-based utility Pacific Gas & Electric Co., sapped it to supply its hydroelectric power generators and downstream water users. This was after an agreement between Plumas Audubon and the company that outlined protocols for preserving the grebes’ nesting habitat. The chapter is now pairing up with Audubon California to hopefully negotiate a new deal with PG&E officials.

Each summer, Western and Clark’s Grebes migrate from their wintering waters in the Pacific Ocean to the inland lakes of California. (Because they lose their flight muscles after migration, they’re committed to the sites they choose for the breeding season, making disturbances all the more impactful.) But as climate change and diversions cause the state’s natural formations to dry up, Almanor and other reservoirs have become increasingly critical for reproduction: They support more than 90 percent of the state’s breeding-grebe population and 45 percent of that in the Intermountain West. That has encouraged water managers to adapt their practices to protect bird colonies.

Take Thermalito Afterbay in Oroville, for example. In 2004, California Department of Water Resources managers began testing how deep the reservoir needed to be fulfill both the grebes’ needs and the state's hydroelectric and downstream-water obligations. They established a goal of fluctuating levels no more than five feet during the birds’ nesting season.

“It was essentially a good faith effort our department and management made voluntarily to protect this species,” says Ryan Martin, senior environmental scientist with the Department of Water Resources.

Plumas Audubon would like to strike a similar perpetual deal with PG&E, which recently filed for bankruptcy after a spate of fires. The chapter has been monitoring Almanor’s grebes since 2010, and has found a strong correlation between water levels and the birds’ reproductive success. If the reservoir’s surface drops too quickly, the eggs and chicks are left vulnerable to gulls, otters, and other predators. That’s what Lindsay Wood, executive director of Plumas Audubon, suspects happened last year, resulting in the colony’s lowest success rate in nearly a decade. A similar sudden drawdown in 2016 led to 788 abandoned nests and a combined loss of 4,000 nestlings.

To secure a better future for grebes, Plumas Audubon members have been working with PG&E since 2013 to stabilize Almanor’s water levels. In 2016, they drew up a tentative agreement to cap drawdowns from July 1 to August 31. But a pilot project that summer demonstrated the complexity of PG&E’s water demands, so Audubon amended its recommendation to a maximum of 0.84 inches a day.

Then, last year, PG&E lowered the lake levels by as much as 1.92 inches a day, according to a letter written this January by Mike Lynes, Audubon California's policy director. The company’s officials dispute Audubon's calculations: They state that the average drawdown rate between August 3 and August 13 was consistent with Plumas Audubon’s revised recommendation. An email from Paul Moreno, the utility's marketing and communications officer, also attributed the 2018 nest failures to other elements such as strong winds, smoke, and reduced populations of the fish grebes feed on.

Still, Lynes and Wood are looking for a path forward before the birds return to Almanor in coming weeks. “We're trying to figure out why this is happening and what we can do about it. It's a significant ecological problem,” Lynes says.

A meeting scheduled for today with Janet Walther, PG&E’s hydroelectric relicensing compliance officer, could provide answers for both Audubon and wildlife authorities. The state’s grebe-monitoring program is part of a $2.8 million project to restore natural resources damaged by oil spills near San Francisco. To offset mortalities in the birds’ wintering habitat, the California and U.S. Fish and Wildlife departments have put $774,000 into protecting nesting colonies at inland water bodies.

“If you're investing these dollars to get birds to breed and then every few years you're sucking all the water away and the population crashes, you're not doing a great job,” Lynes says. What’s more, he adds, PG&E could face fines for the Almanor disturbance under California’s Fish and Game Codes and the federal Migratory Bird Treaty Act.

The Western Grebes at Almanor represent as much as 5 percent of the species’ global population, says Ryan Burnett, an ecologist with Point Blue Conservation Science, a California-based research institution. After 19 years of observing colonies at Almanor and other lakes, he believes that nest abandonment due to drawdowns is more common than we think. That said, cases like the one with PG&E should be avoidable: “All the pieces are in place for local volunteers to monitor the nesting and work with the company to manage water levels consistently during that one-month period each year,” Burnett says.

As summer approaches, the grebes are beginning their nocturnal migration from the ocean to the lakes. Wood is counting on another season of courtship at PG&E’s reservoir—one that’s full of thousands of grebes nodding, bobbing, and eventually, ferrying around their chicks as a sure sign of breeding success.

A new film offers a rare glimpse of the critically endangered bird's dazzling courtship moves on the windswept plateaus of Patagonia.

With Legal Pot, California Faces a Barrage of New (and Old) Environmental Problems

Cleaning up poisons killing Northern Spotted Owls is just one challenge the state faces. A conservation fund built from cannabis taxes could help.