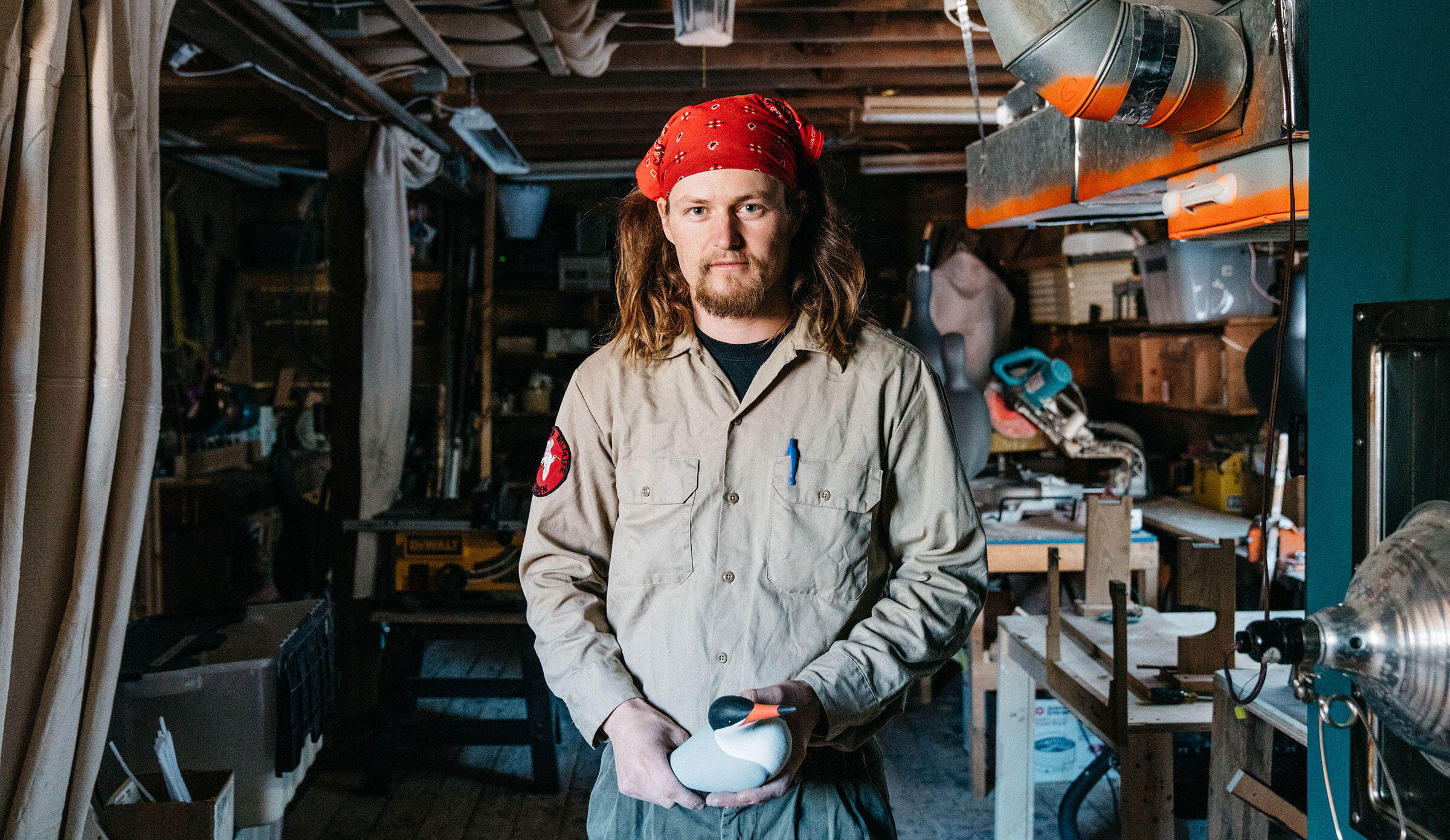 True to their name, most seabirds prefer to spend their time out on the open sea. But on land, near lurking predators, many species prefer to be in groups and refuse to nest unless a cacophonous colony surrounds them.

Knowing this, in the 1970s, ornithologist Steve Kress decided to test a novel idea on a small island off the coast of Maine where Atlantic Puffins once nested. He wondered if he could lure the seabirds back by placing decoys—life-size models in imitation of real birds—around the former colony to create the illusion of bustling activity.

After nearly a decade of effort, and with the help of decoys and even a few puffin chicks, Atlantic Puffins returned to sites they hadn’t colonized for nearly a century. With that, Kress had discovered that decoys work.

“We realized this could be really important,” Kress, now the director of Audubon’s Seabird Restoration Program, says. “The idea of actually trying to start a new colony was still a novel idea.”

Since then, this method called “social attraction” has taken off as a vital conservation tool to attract seabirds to empty sites. Along with deploying decoys, other social lures, such as sound systems blaring bird calls and mirror boxes that create the illusion of a larger group, can be used to bring birds to diminished, abandoned, or novel seabird colonies. Researchers around the world have used these methods to protect or restore more than 45 different seabird species in 120 restoration projects.

There are so many active projects that conservation decoys have become a bona fide business. For more than two decades, a Vermont couple has dominated the market as owners of Mad River Decoy Company, the leading provider of conservation decoys. Now they’ve donated their factory to Audubon, bringing the production of social attraction tools back to their birthplace.

“It’s cool that the production of these things is coming back to the same organization that pioneered their use in the first place,” says Eric Snyder, the facilities manager of Hog Island Audubon Camp in Bremen. This winter, he set up Audubon’s decoy workshop in the barn that served as Kress’s home base during his early experiments. 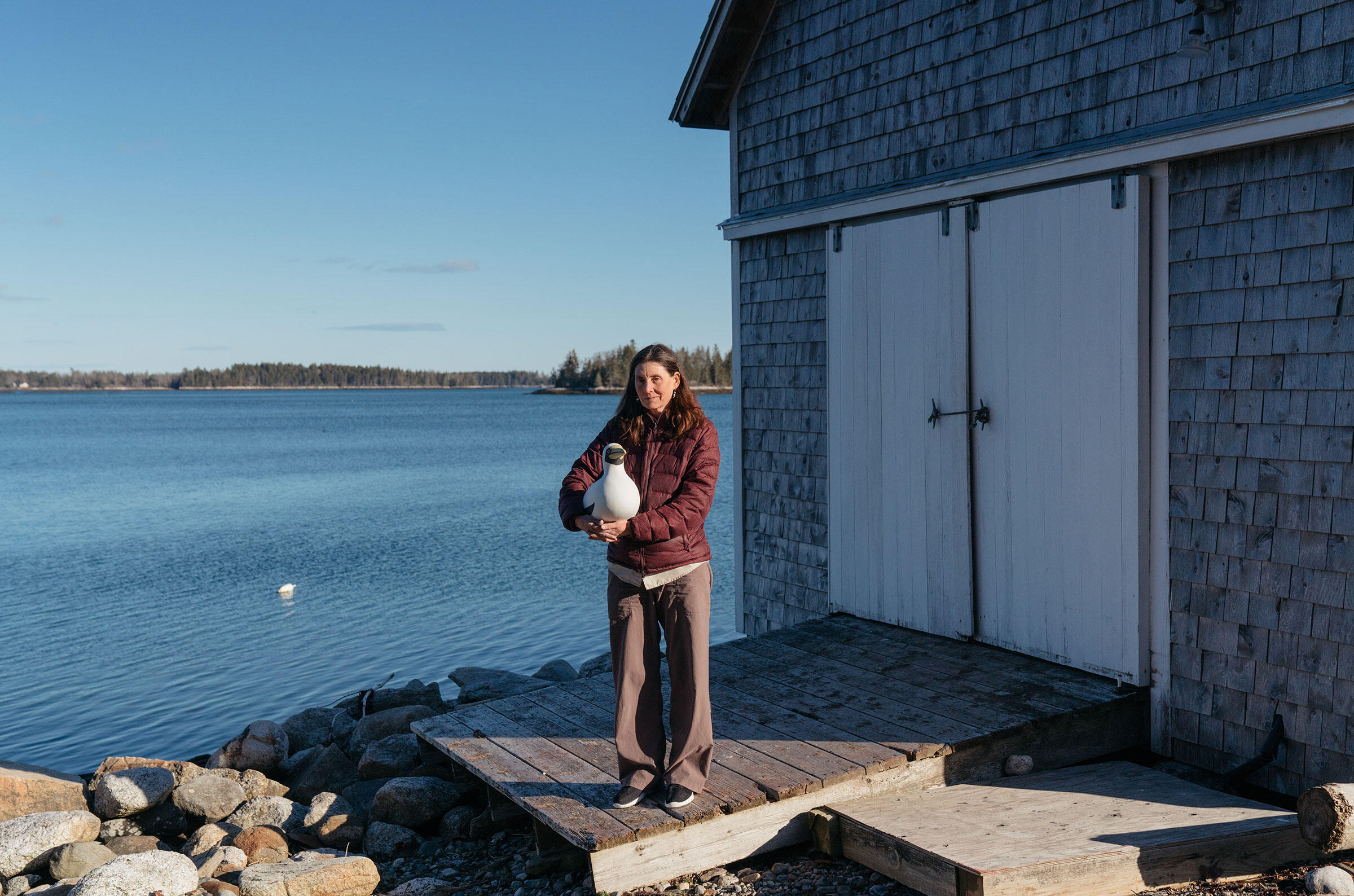 While product manufacturing falls outside Audubon’s typical repertoire, the owners of Mad River Decoy offered to hand over their business to Audubon in preparation for their own retirement; they trusted that Audubon staff would make knowledgeable decisions about decoy design and offer reliable advice to clients. Members of the Seabird Restoration Program agreed, and in December they took over operations, renaming the venture Mad River Decoys by Audubon.

“You do feel very good about providing these materials to conservation projects,” says Susan Schubel, an outreach educator with Audubon’s Project Puffin who builds decoys with Snyder. “We are helping birds around the world.” 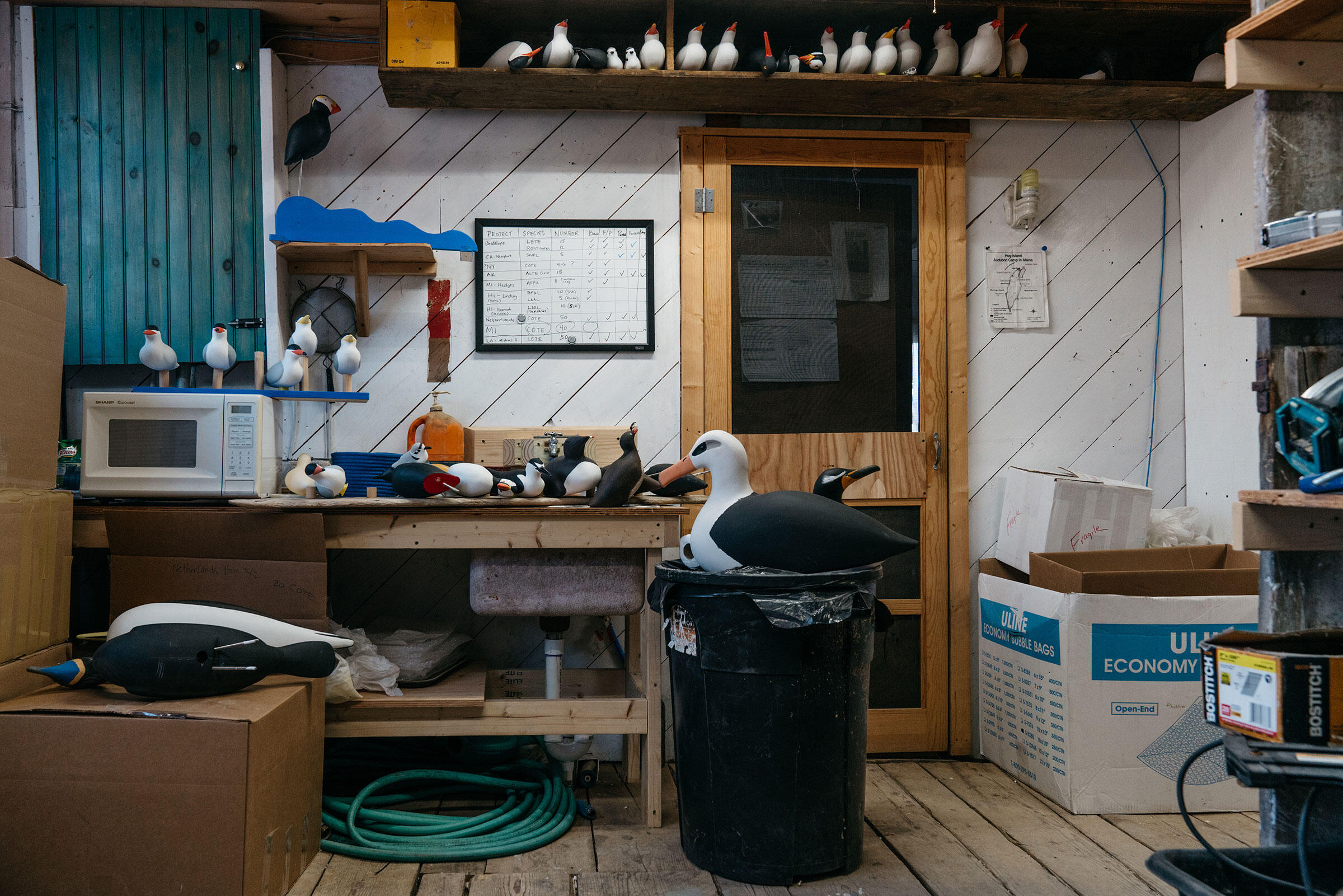 Since December, Schubel and Snyder have worked long hours filling orders, individually wrapping hundreds of decoys, and then shipping them to conservation projects around the world. They’ve sent terns to the Netherlands and Switzerland, puffins to Iceland, and albatross to Hawaii. This coming winter, they plan to manufacture decoys part-time from November through March. The factory will be closed in summer, when Schubel works in the field on seabird restoration projects, and Snyder works at Hog Island Audubon Camp within eyeshot of the decoy workshop. 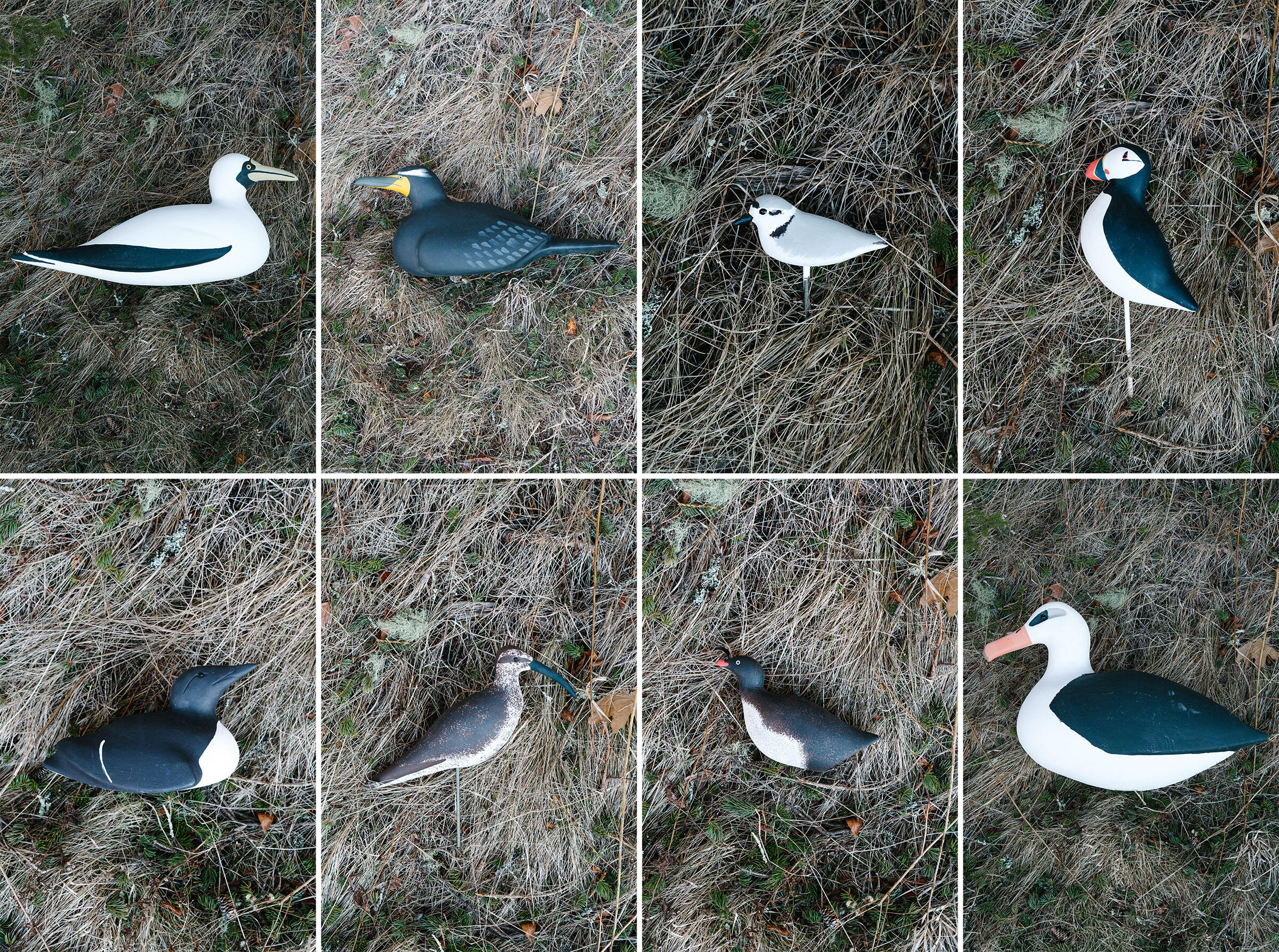 In the workshop, which looks and feels like a busy woodworking studio, Snyder first bakes each seabird mold of out of polyethylene plastic. (See the slideshow below to view the full process.) While traditional hunting decoys are often made of wood, these conservation decoys must last for years exposed to the elements. Polyethylene lasts much longer than wood, Snyder says, so polyethylene it is.

Once the molds bake, Schubel painstakingly hand-paints each one with markings specific to different species. It’s not that the birds necessarily have an eye for detail; rather, their tastes are somewhat unpredictable. “The birds really will respond to a variety of colors and shapes,” Schubel says. “It’s hard to know what they are going to pick up on.”

<<You can help! Audubon’s work makes a difference. Support conservation efforts like the Seabird Restoration Program, Project Puffin, and others across the country by donating today! >>

In fact, early on Kress noticed that terns would perform courtship dances for something as simple as a painted wooden rectangle with a dowel on top—talk about low standards. But he gives the birds the benefit of the doubt; after all, in the wild they learn pretty quickly that the decoys aren’t real.

“But they land there and find comfort in sitting in a flock, and that comfort runs pretty deep,” Kress says. And once some birds land, they become living decoys that attract even more birds. 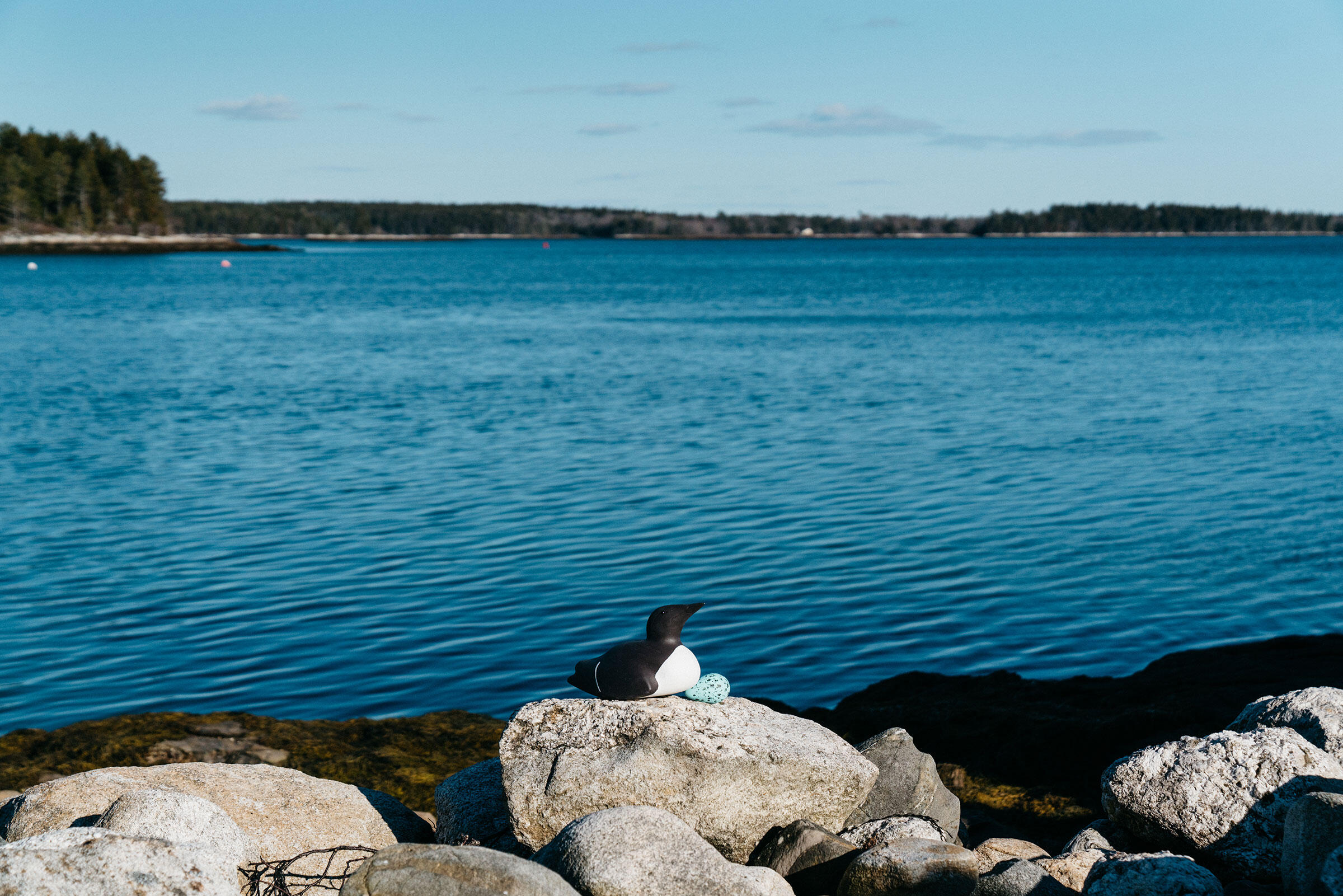 Alex Hartman, a wildlife biologist at the U.S. Geological Survey, has used social attraction to transplant Caspian Tern colonies in the San Francisco Bay away from endangered salmon populations. In 2015, his first year, Hartman’s use of tern decoys produced 225 nesting pairs where previously there had been none. The next year, the colony grew to about 300 pairs.

“This was a really nice surprise and greatly exceeded our expectations,” Hartman says. 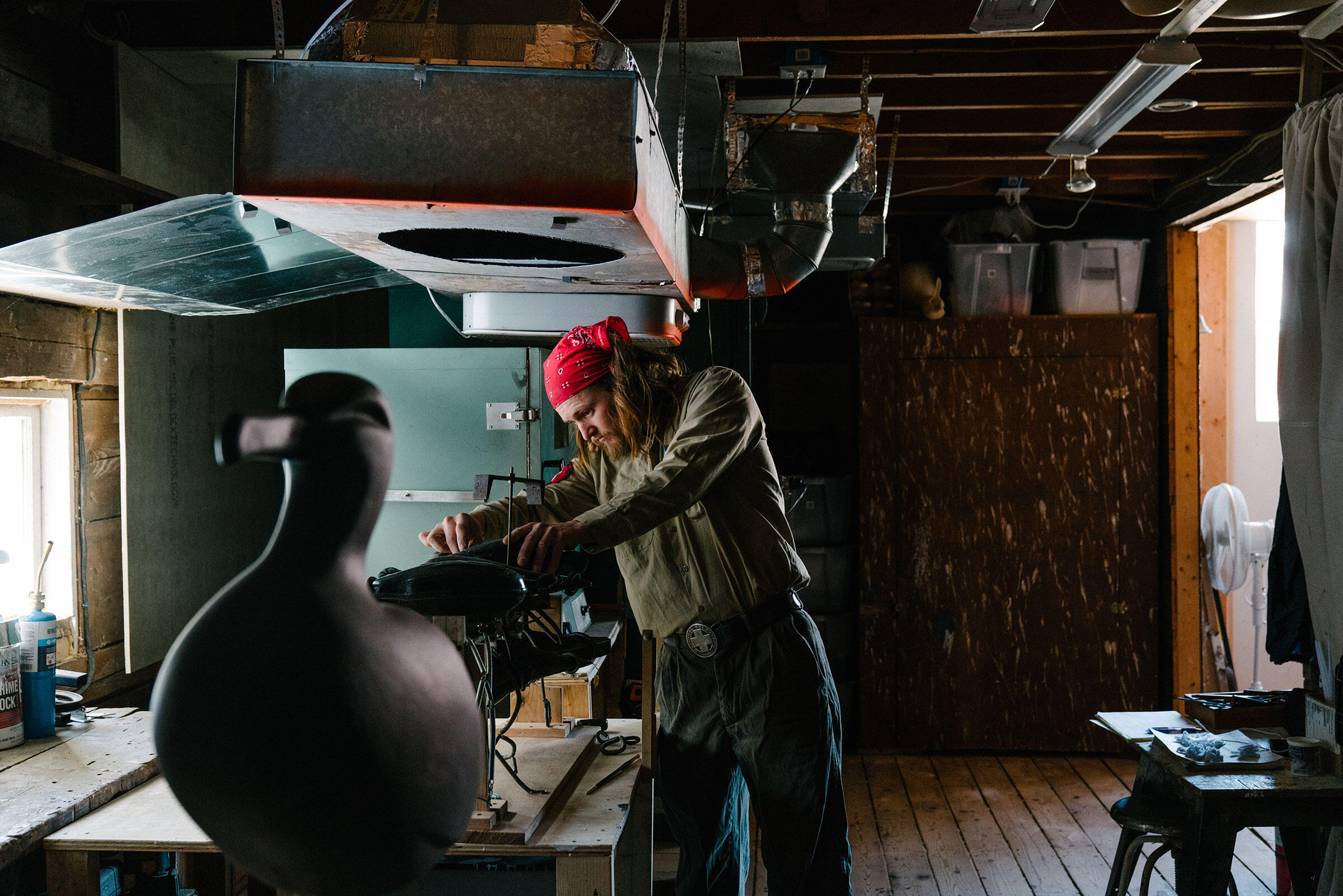 Eric Snyder preps a decoy mold—one that’s blocked from view by the bird in the foreground, which appears enormous due to the photographer’s perspective. The entire process—molding and baking, trimming, branding, drilling, flaming and priming, painting, packing, and shipping—takes roughly three days. Photo: Tristan Spinski 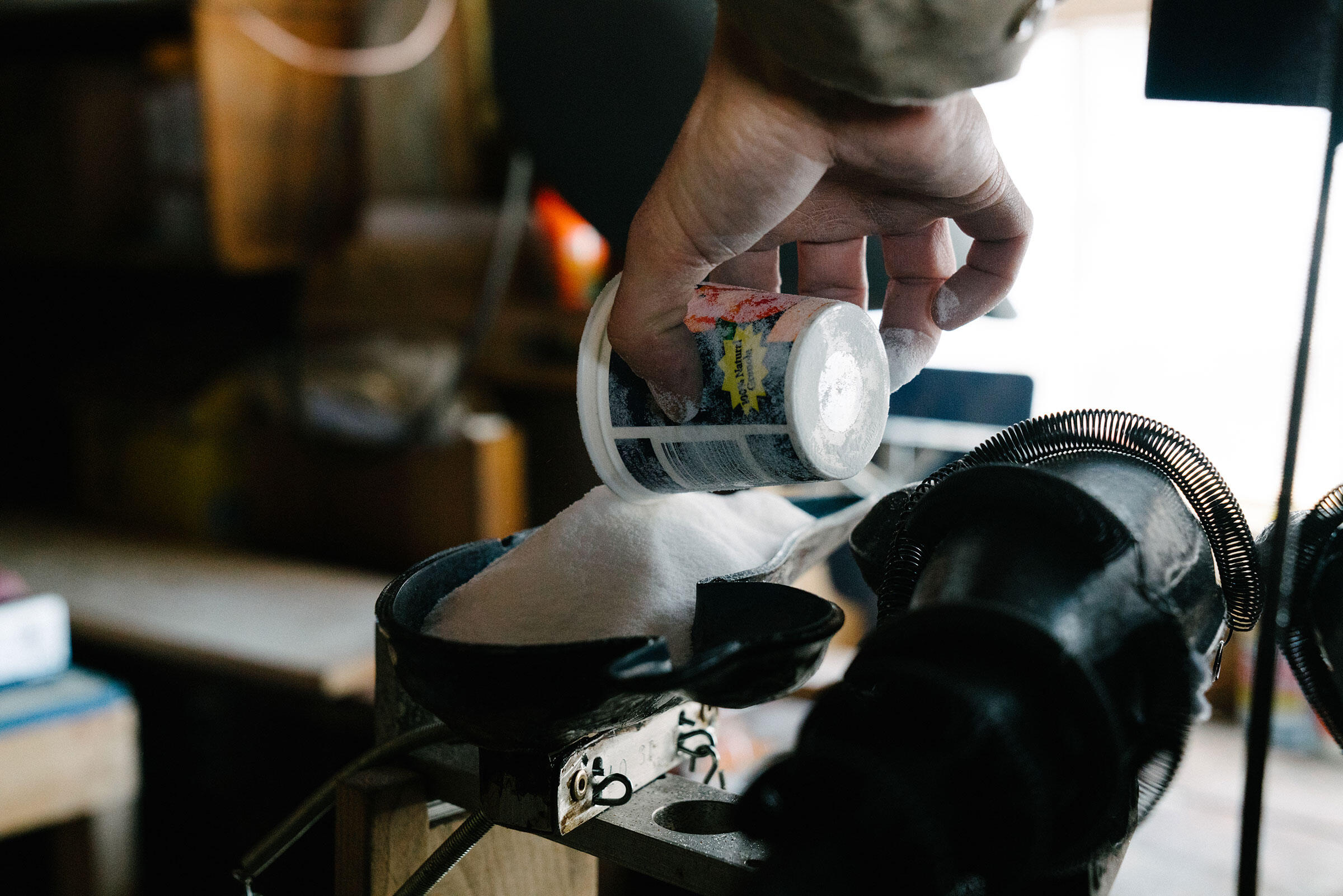 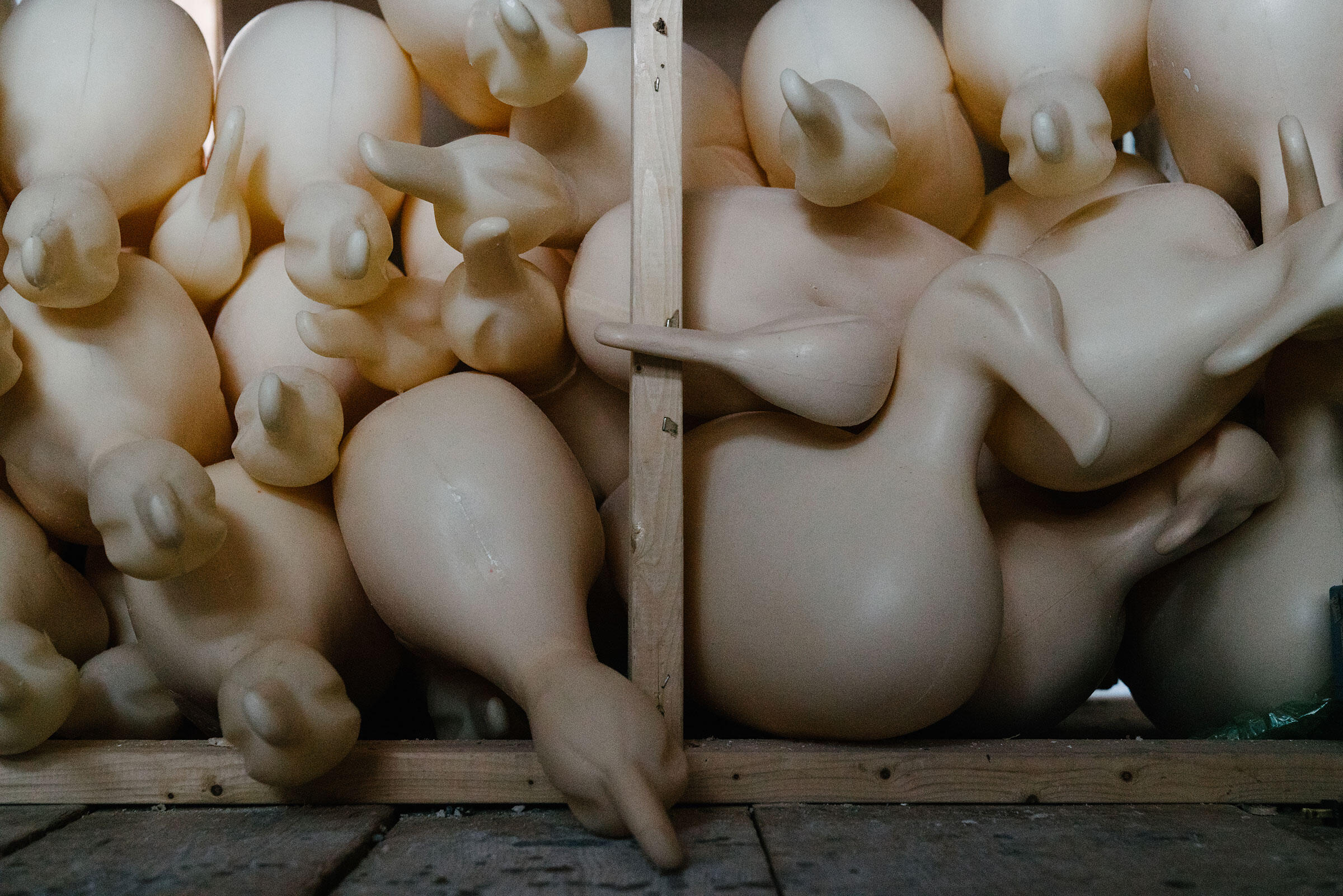 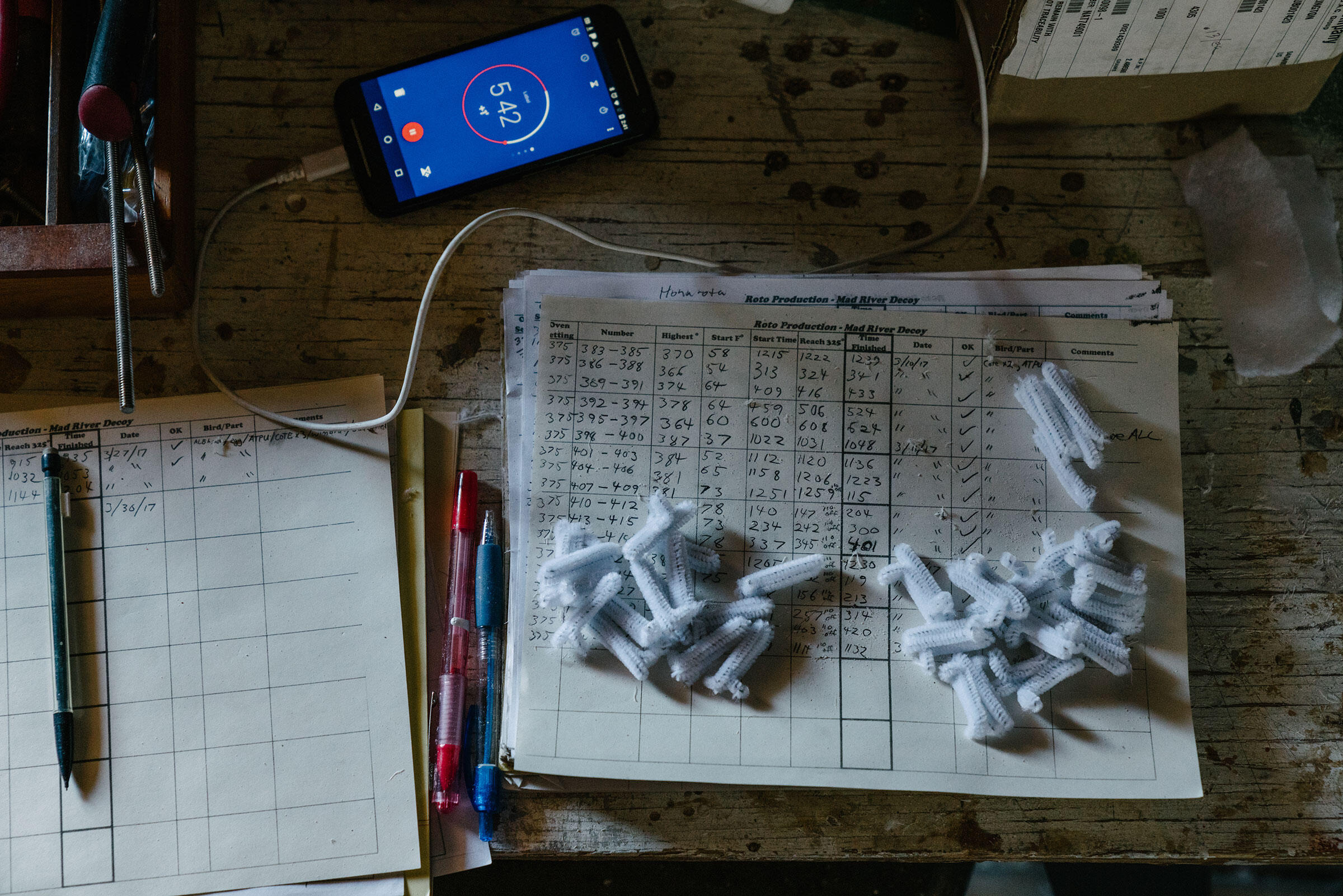 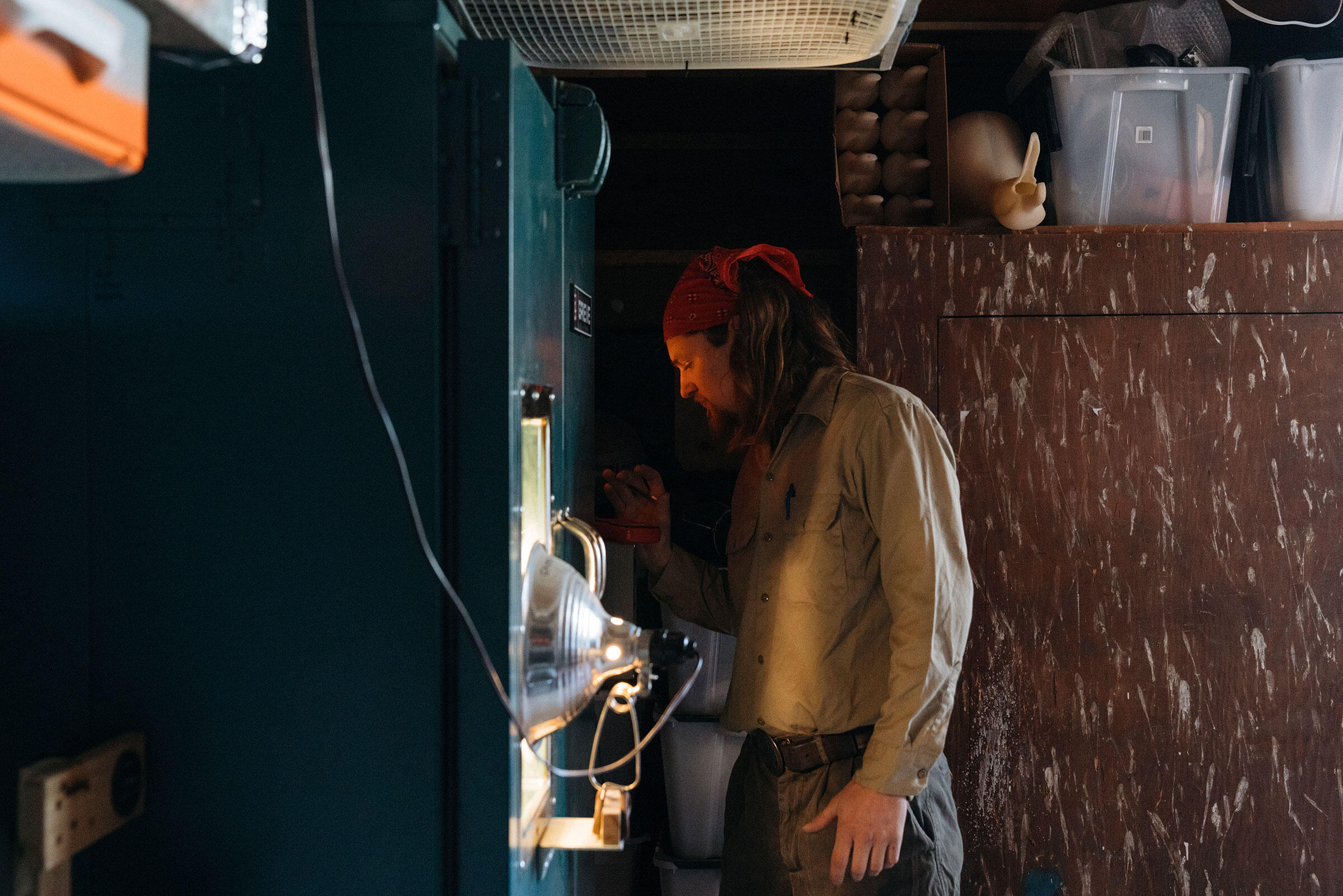 Snyder checks a batch of a decoy molds baking in the oven. Photo: Tristan Spinski 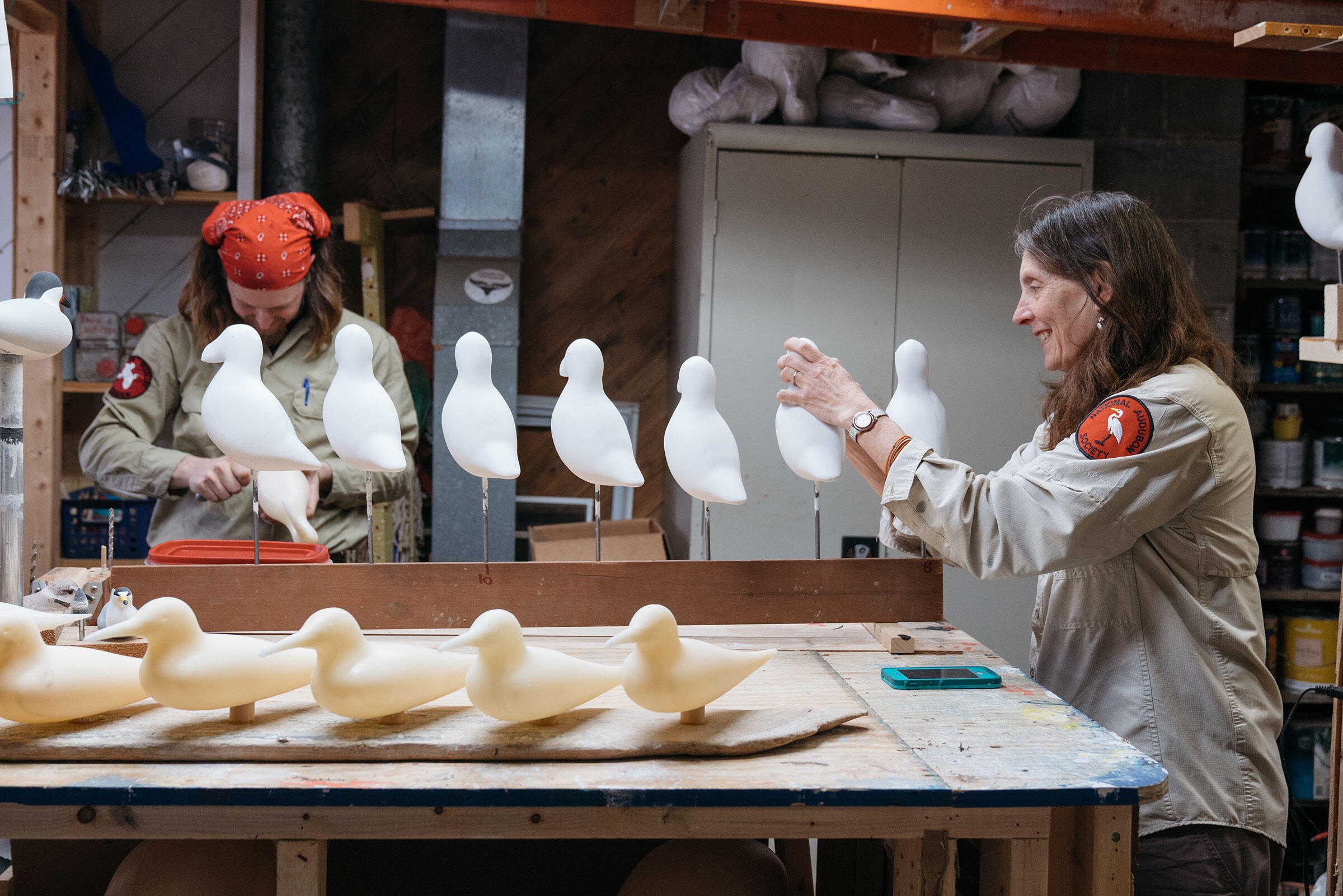 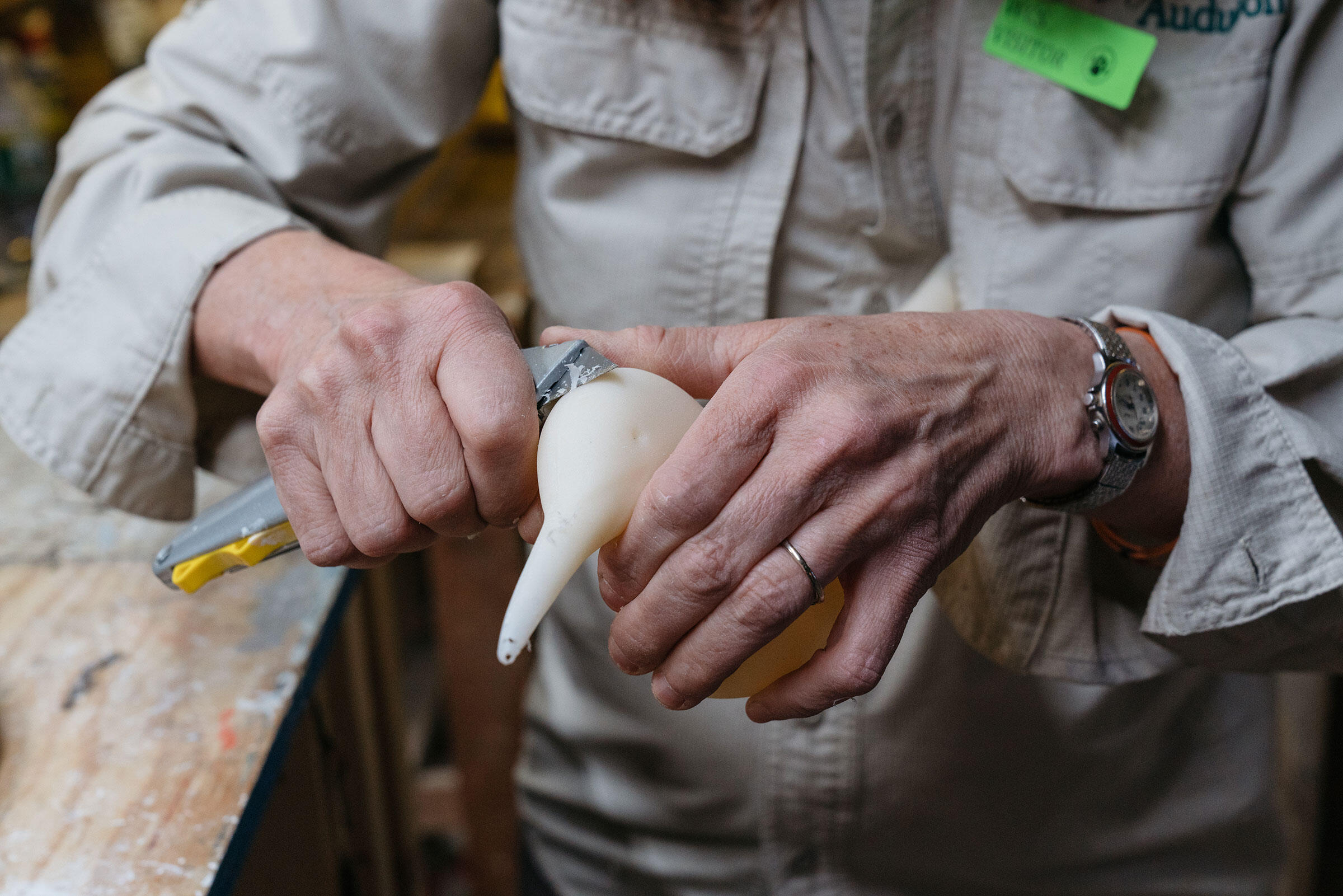 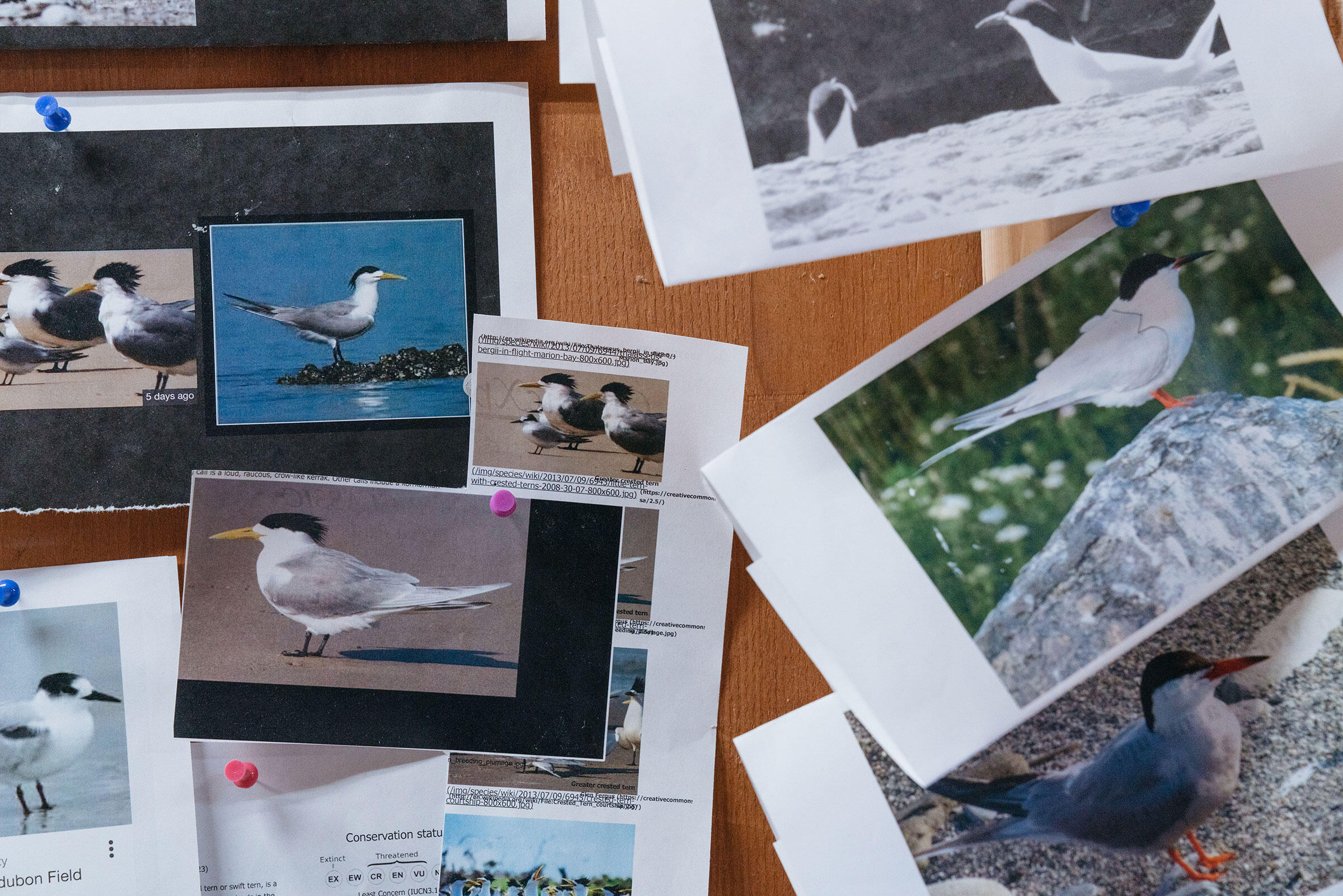 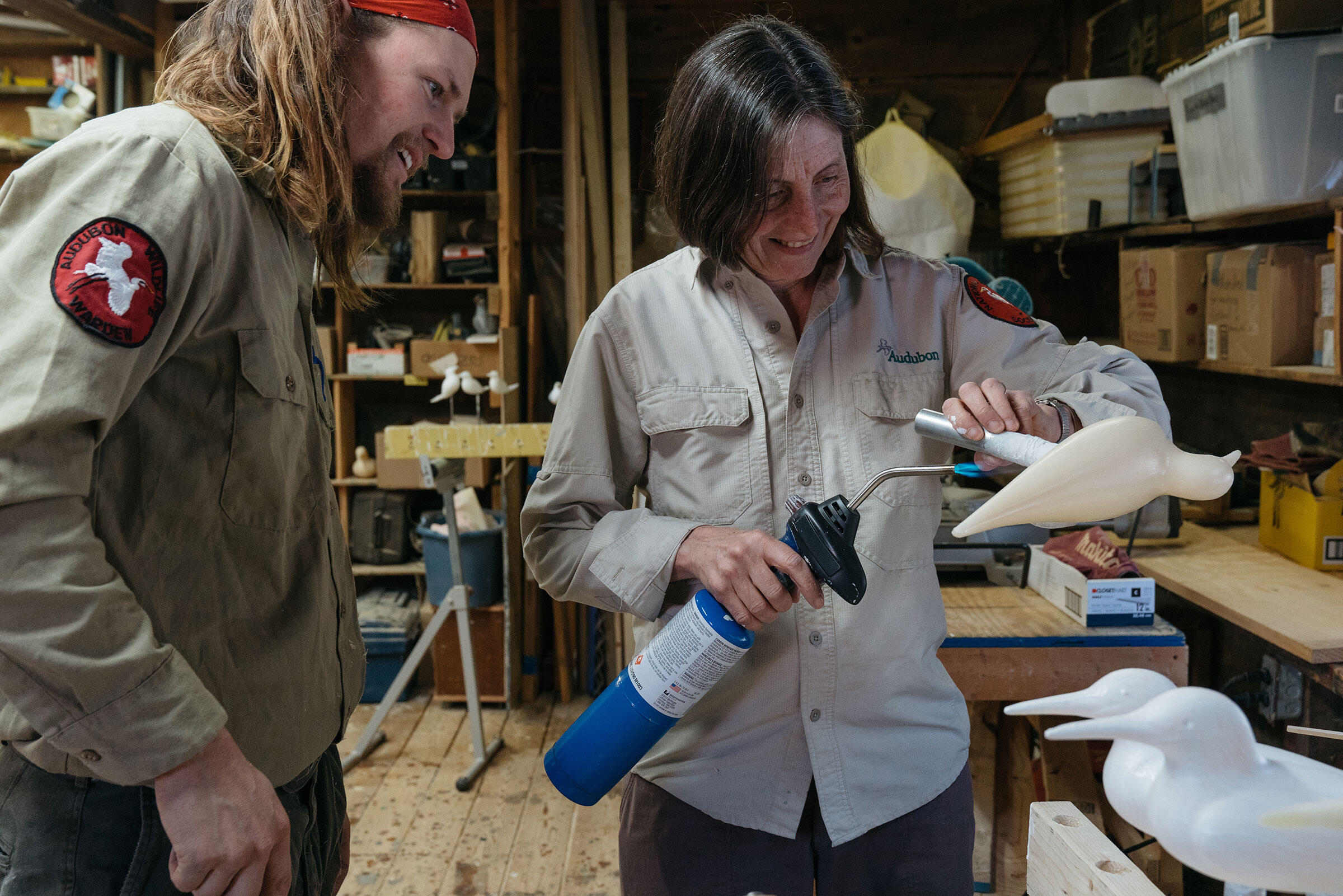 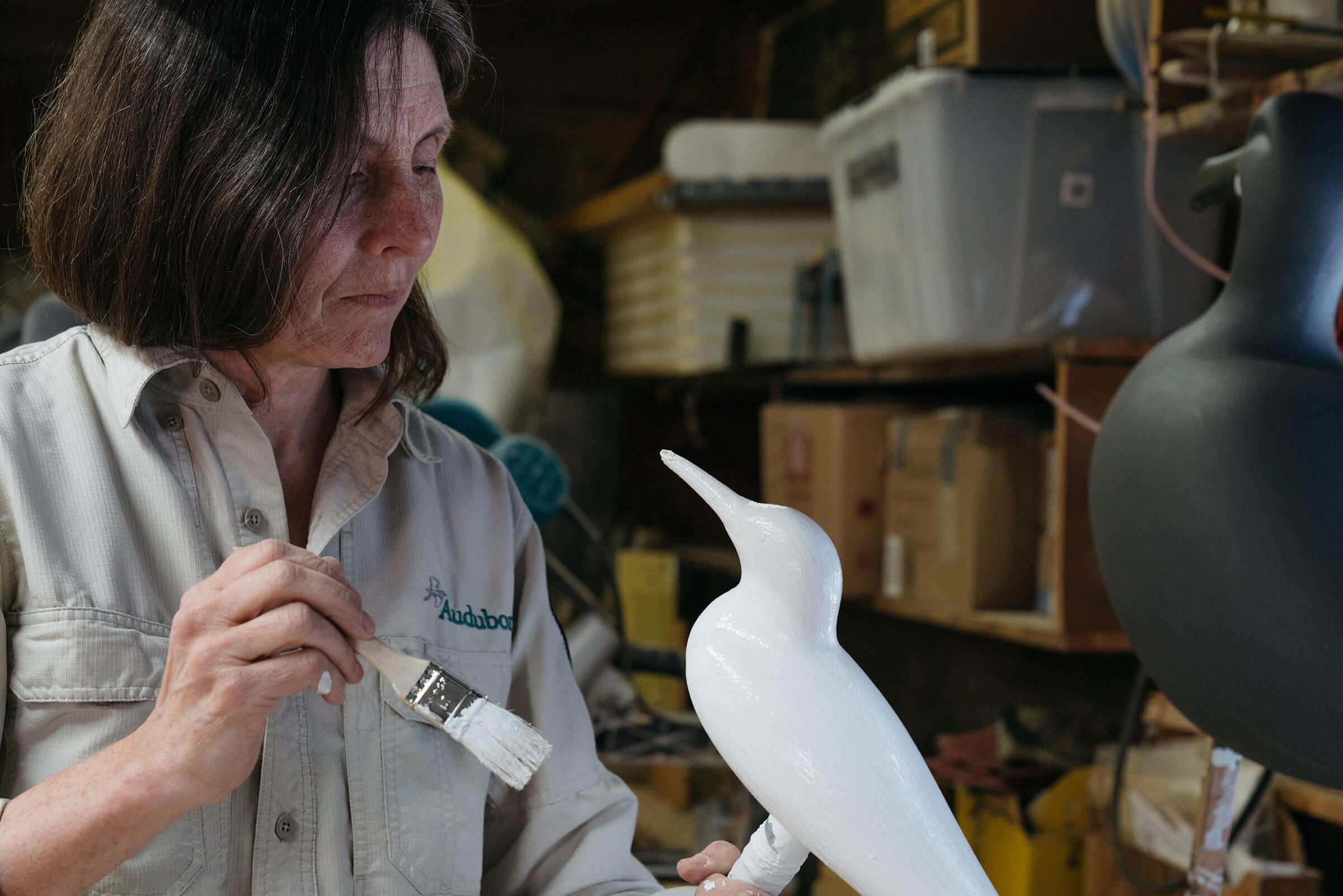 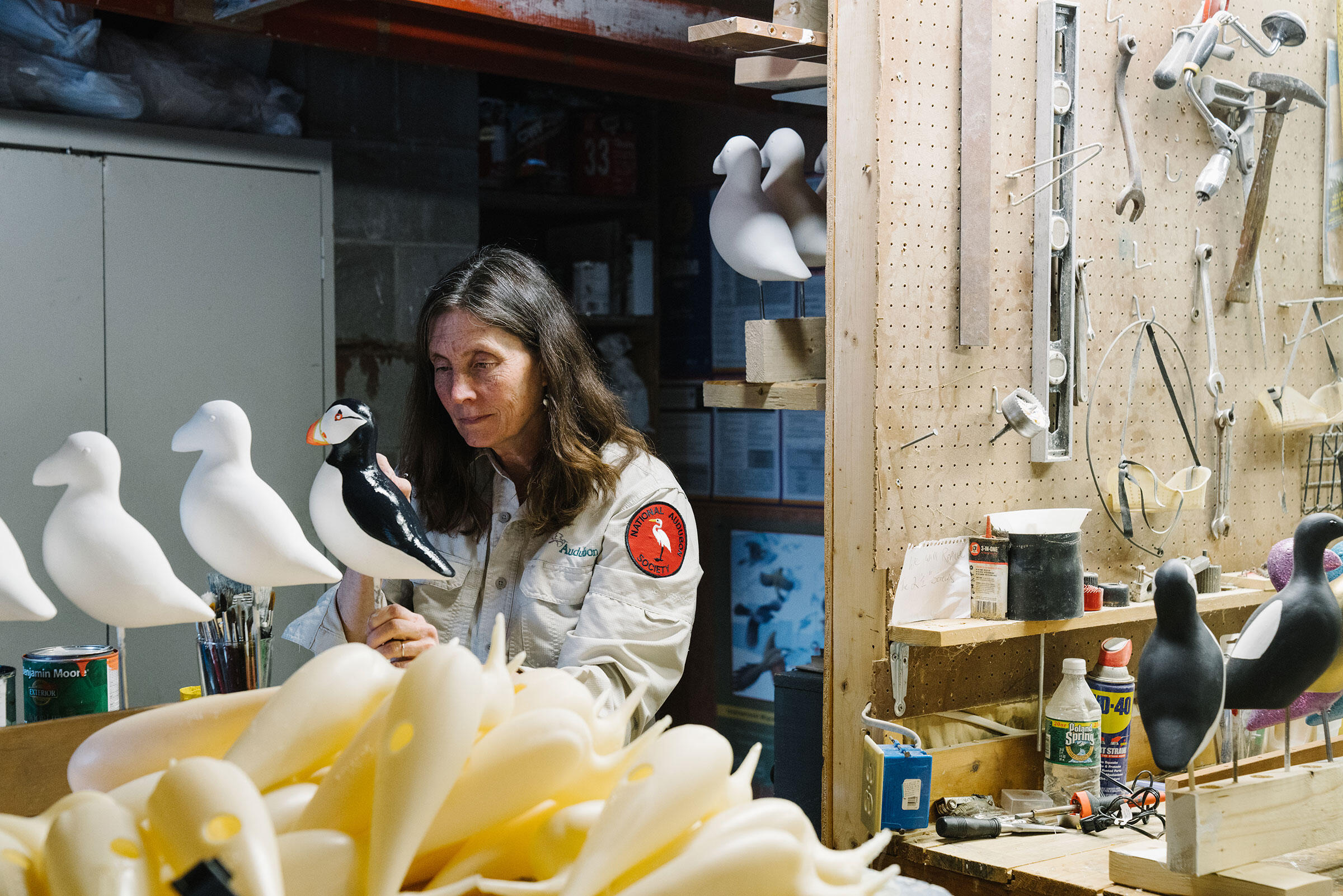 Schubel paints a decoy in the likeness of an Atlantic Puffin. Photo: Tristan Spinski

Not all species catch on so quickly, however. Kress’s initial experiments with Maine puffins took years to produce any nesting pairs, likely because puffins prefer to nest at their own birthplace. So in addition to placing decoys on the colony, Kress’s team transplanted chicks from Newfoundland, hand-fed them, and reared them until they were old enough to set out to sea alone. Eight years later, five puffin pairs began nesting there, and today, that number has swelled to 150 pairs. 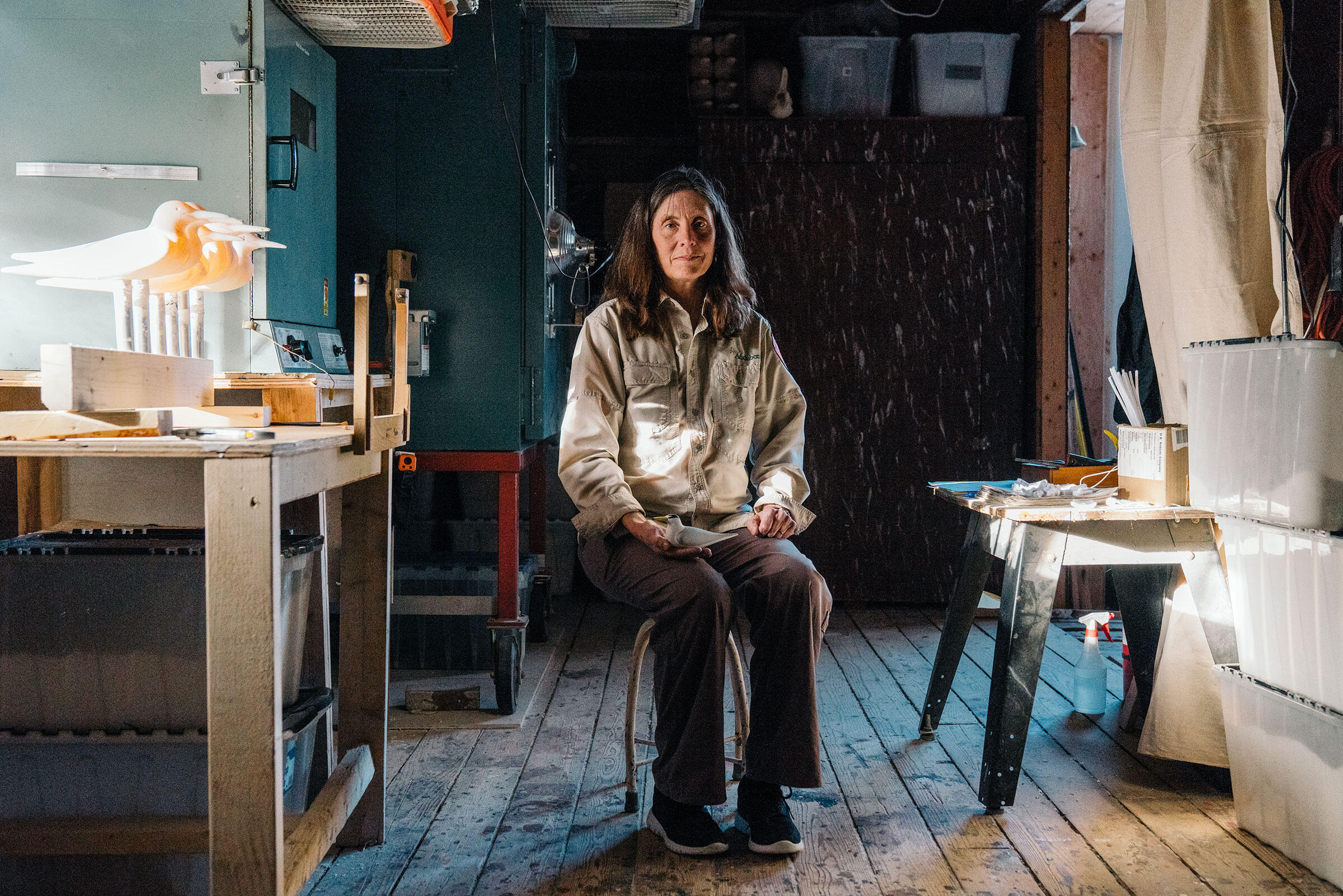 Nearly one-third of all seabird species are currently threatened with extinction, Kress says. Spreading knowledge of his methods could prove vital to their long-term survival.

Mad River Decoys by Audubon takes that principle seriously. The company offers complimentary consultations about how to implement social attraction and also sells sound systems and mirror boxes—bringing the dissemination of tools and knowledge under one roof. The business isn’t exactly a cash machine, but that’s not really its mission, Schubel says.

“It’s artisanal decoy making,” she says. “Every step of the way is all done by hand, with love.”