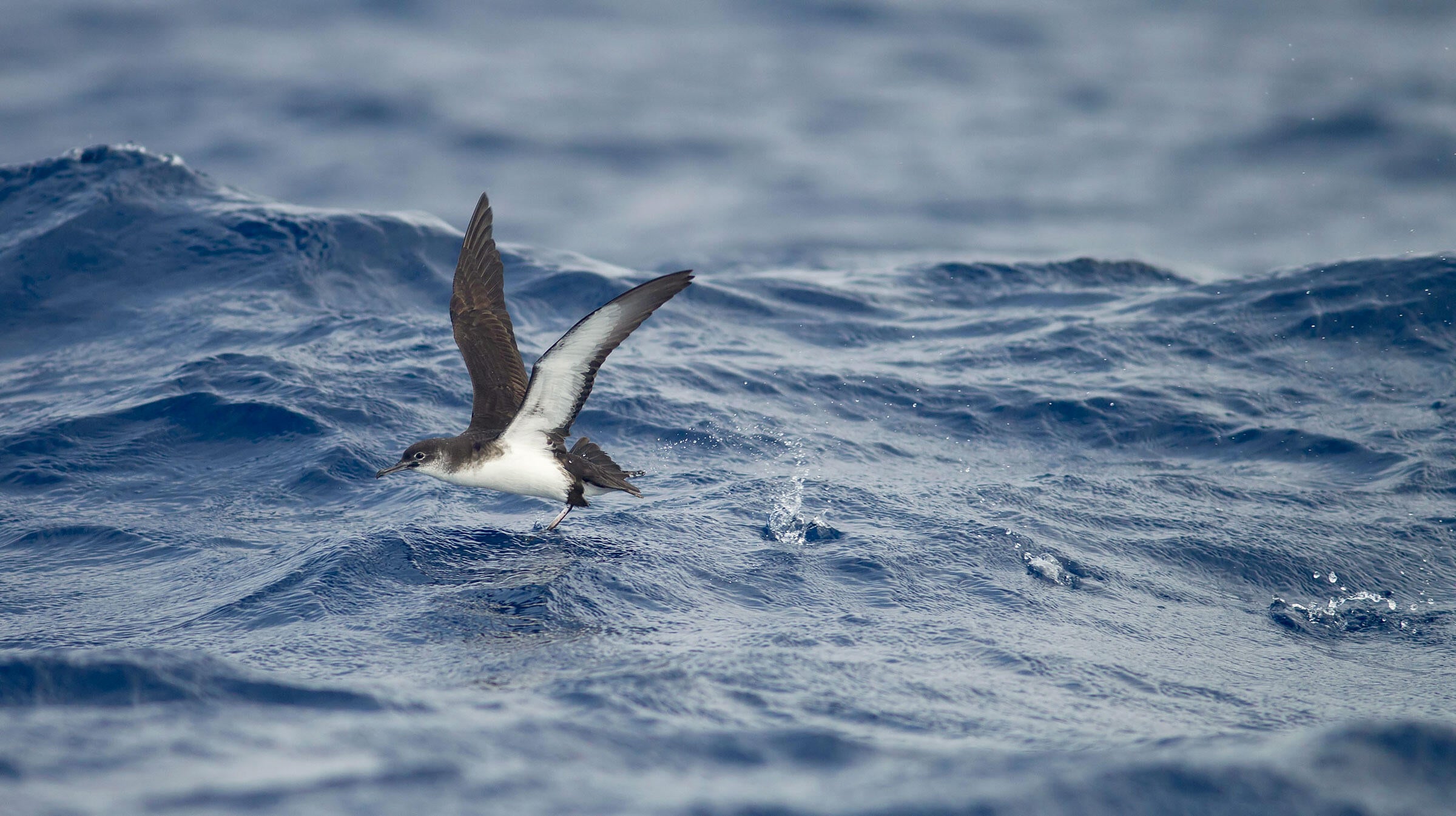 Manx Shearwaters often overshoot their destination of Cape Horn, Chile, and end up in the Pacific rather than the Atlantic. As a result, there have been more and more sightings on the West Coast. Photo: George Reszeter/Alamy

Lost at Sea, Hard-Flying Birds Can Be Mega Rarities and Mysteries

A vagrant seabird might be a once-in-a-lifetime sighting, so make sure to keep both eyes on the water.

Some birds are just not meant to be where we find them.

Earlier this year in May, a pelagic trip out of Cape Hatteras, North Carolina, photographed a Tahiti Petrel. As you might guess from the name, this seabird was in the completely wrong ocean. The Tahiti Petrel is found in the Pacific, where it breeds in the southwest and migrates to the northeast during the non-breeding season. But in recent years they’ve been regularly found off Costa Rica, Guatemala, and even up into Oaxaca, Mexico. And now, in what may be a first, one’s been spotted in the Atlantic Ocean.

Seabirds are known for their wide-ranging flights over water; they can soar day and night, picking up speeds of 45 to 67 miles per hour in favorable winds. Their uncanny ability to return to small nesting islands year after year points to exceptional navigational skill—the methods of which are largely unknown. Still, of the billions of individuals that comprise seabird colonies across the world, a few are bound to go astray. For example, in the few decades of birding history, five albatross species from the Southern Hemisphere have turned up in California. In 1984, a Buller’s Shearwater from the Pacific Ocean made its way to New Jersey, and just last February, a Northern Fulmar, a sub-Arctic species, surprised experts in Chile. On one of my own excursions in the Golden State, my group discovered an endangered Short-tailed Albatross from Japan with a satellite transmitter attached to its back. Twenty-four hours later, the scientists tracking the bird reported that it was already in northern Oregon.

All this vagrancy can be a gift to birders, bringing species that we dream of closer to the cusp of sea and terrain. But it can also leave the wayfarers themselves thousands of miles off course. So, how exactly does it happen? The science of that question remains to be tested.

Migratory birds are equipped with complex navigation systems. A little faulty wiring, however, can throw their entire compass off center. An experimental study on Blackpoll Warblers in the Farallon Islands in the 1970s revealed that certain individuals flip their internal directions, causing them to confuse southwest with southeast. The lead ornithologist, David DeSante, coined this phenomenon as “mirror-image misorientation.” Everything about the system is correct, except for those cardinal directions. Perhaps something similar occurs in seabirds, which might use magnetic force, landmarks, or smell—or all three—to navigate. This could explain why a Salvin’s Albatross migrating from New Zealand to the Humboldt Current in South America wound up near Half Moon Bay, California, in 2014. Magellanic Penguins are another intriguing case: They’re highly migratory, with some moving hundreds of miles from their Patagonia breeding grounds to wintering areas as far as the upper end of Chile. Was it mirror-image misorientation that accounted for the penguin that showed up farther north on an El Salvador beach in 2007? Rare penguin sightings in the United States are always considered releases or ship-assisted transplants, but maybe they could be natural vagrants. It’s an absurd thought, but then again, seabirds make the impossible seem possible.

Storms can also play a major role with rare sightings by blowing species into areas where they shouldn’t be. But most seabirds are masters of the wind, and we know that they can ride the air currents in front of the melee and essentially get out of its way. Regardless, when a hurricane makes landfall on the East Coast, it usually brings storm-petrels, shearwaters, jaegers, and petrels onshore. Birders hypothesize that these birds get trapped in the eye of the storm, which is a relatively safe place with low rains and winds. As they ride the mass onto land, they might drop out over reservoirs, rivers, and lakes, eventually finding their way back to the great aquatic.

Meanwhile, those birds that wander into the “wrong” part of the ocean can end up colonizing new areas, returning year after year to reap the benefits of territory and other resources. One species that’s showing signs of this is the Manx Shearwater, which breeds in the north Atlantic, migrates to the south Atlantic, and is often is found near Cape Horn in Chile. When exuberant travelers move past Cape Horn, though, they can mistakenly enter the Pacific and migrate up the wrong ocean. With that in mind, some experts speculate that the Manx Shearwater could be on the edge of colonizing the Pacific, with regular sightings along Oregon, Washington, and Alaska.

All told, seabird vagrancy is a spectacular and unexpected phenomenon. And while it’s tough to pin down exactly where the rarities might show up after a summer squall, pelagic birding trips are often the best bet. There can be a lot of rewards on the open ocean, like that record Salvin’s Albatross in Half Moon Bay or the recent Trindade Petrel off Long Island, New York. (Depending on its population, the petrel should be in Brazilian waters or the Indian Ocean around this time of year.) Venturing out at different seasons also increases your chance of finding different seabirds.

From a land lover’s perspective, seawatches at well-known migration points are another way to glimpse the masters of the wind. In fact, there’s an entire breed of hurricane-chasing birders on the East Coast who lay in wait as the eye passes to find and report vagrants. Such hijinks aren’t limited to the Atlantic either: Farther inland, the Great Lakes region often turns up fun seabird sightings. Not to mention the Juan Fernandez Petrel that was spotted over an Arizona driveway after Hurricane Newton in 2016; a bird of the deep Pacific, this petrel nests on a single 19-square-mile island, far removed from the ravenous eyes of listers.

It's not surprising that so many birders become seabird addicts. The thrill of finding a rare bird offshore is intoxicating, the possibilities endless.