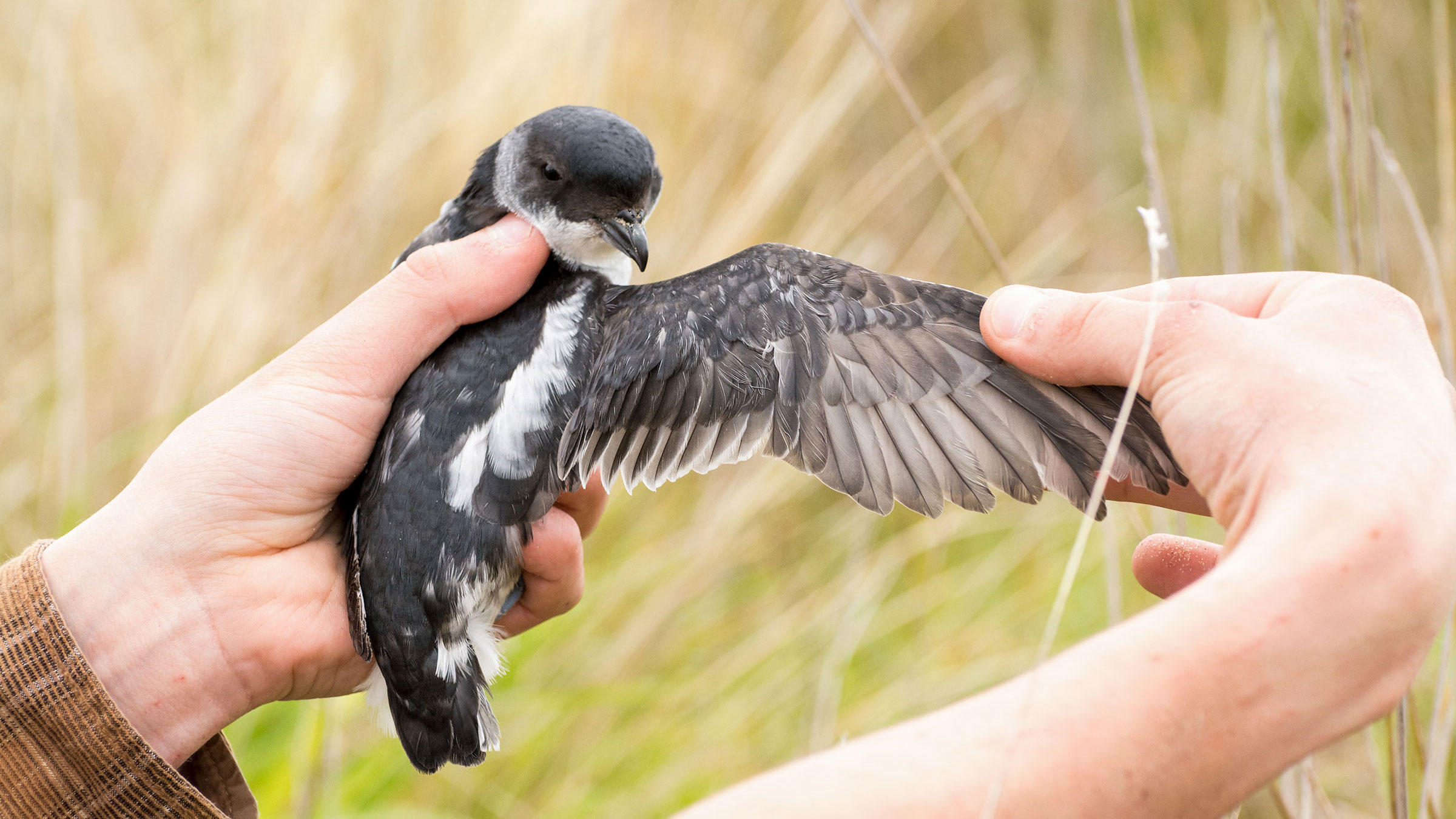 A single colony of 150 birds somehow survived introduced rats, the scourge of New Zealand's birds. Now the race is on to save them from sea level rise.

Codfish Island, off the southern coast of New Zealand, might be small, but it’s of tremendous importance to the country’s birds. The five-square-mile isle, known as Whenua Hou to the Māori people, is probably best known as the epicenter of Kakapo conservation. The largest population of the imperiled flightless parrots survives in the island’s forest alongside Mottled Petrels (some 350,000 pairs, more than anywhere in the world), Cook’s Petrels, and Sooty Shearwaters during the seabirds’ breeding season.

Less known is a population of diving-petrels that nest in the sand dunes along the coast. The birds used to be considered South Georgia Diving-Petrels, a species numbering in the millions that breeds on islands in or near the Southern Ocean. But for decades, New Zealand scientists and conservationists suspected this colony was different. New research, published last month in the scientific journal PLOS ONE, confirms their suspicion: The diving-petrels on Codfish Island belong to a new species, now called the Whenua Hou Diving-Petrel (Pelecanoides whenuahouensis). And with a population of around 150 birds, all living on this single island, the species is already critically endangered.

Graeme Taylor, a seabird scientist, has been with New Zealand’s Department of Conservation since it was formed in 1987. For decades, he’s thought that the Codfish Island colony could be a different species. He hadn’t heard of South Georgia Diving-Petrels nesting in sand dunes before, for one. Then, he noted that these birds had forked tails—an “odd” finding considering that no South Georgia Diving-Petrels in museums had the same. Some preliminary genetic data also suggested they were unique, but it wasn’t entirely conclusive.

Finally, a few years ago, a graduate student showed up with the interest and time to work with the birds. After Johannes Fischer’s first research project, on Bornean Peacock-pheasants, fell through, he rolled with the punches. “I realized: I’m in the seabird capital of the world in New Zealand,” he recalls. He contacted the Department of Conservation to see if they had any ideas for projects, and they pointed him to the small colony on Codfish Island.

“I found myself in a very lucky place,” Fischer says. “They let me, a nobody, study and manage one of their rarest species.”

Of course, they didn’t yet know for certain that it was one of their rarest species. Fischer spent two months living at the research station on Codfish Island during the 2015-2016 breeding season, during which time he caught and measured 127 live diving-petrels. He grew fond of the rare birds that are little known to most birders. About the size of a human hand, the “tiny potatoes,” as Fischer describes them, zoom right above the sea’s surface—and when a big wave comes, they fly right through it. (The birds have an unusual nostril structure that “presumably deals with this massive wall of water they smash themselves into on a daily basis,” he says.) Their wings are more like a penguin’s flippers, leading Fischer to suspect they spend most of their time underwater, yet they can still fly with them, resulting in diving-petrels having “the highest wing loads of almost any bird,” he says.

The seabirds are also fiercely loyal. They come back to the same burrow and the same partner every year—and you don’t want to get between a diving-petrel and its chick. “I’ve had birds try to push me out of the way because I was in the way of its baby,” Fischer says. In all, “it’s a tiny potato that actually has a really cool life.”

To confirm whether the Codfish Island birds differed from other South Georgia Diving-Petrels, he assembled a detailed dataset with precise measurements of individual birds' features from throughout the species’ circumpolar range. Fischer caught and measured live South Georgia Diving-Petrels on Kerguelen Island, south of the Indian Ocean, and then visited museums to measure specimens, too. Comparing the measurements, he found that the Codfish Island birds were quite different from the rest of the species, having longer wings, deeper bills, longer heads, and different coloring. In his new paper, Fischer named the birds Whenua Hou Diving-Petrels, after the Māori name for the island.

It will take some time for taxonomic committees to decide whether they agree with the new species designation. But in the meantime, the new description is enough to convince the Department of Conservation to take active measures to protect the colony.

The researchers believe that the species used to be more widespread than Codfish Island alone.

“Having it now formally described, it’s on the public radar and political radar; even the senior managers in DOC are aware of it,” DOC’s Taylor says. “It’s harder for them to ignore it."

The researchers believe that the species used to be more widespread than Codfish Island alone. On nearby Steward Island, thousands of diving-petrel skulls, dated to around 1350, were found in the sand dunes. After a couple hundred years, piles of rat skulls joined them, and then by 1600, any evidence of diving-petrels vanished. “A colony of millions of birds crashed by rats,” Fischer says. “It’s the same story as everything in New Zealand: They just got hammered by these invasive mammalian predators.” Originally, it was assumed these were South Georgia Diving-Petrels, but now it’s believed they belonged to New Zealand’s own Whenua Hou species.

Codfish Island has a long history of destructive invasives: Weka, a large flightless rail that wreaks havoc on nesting seabirds, were removed by 1984; possums were removed by 1987; and rats (known as kiore by the Māori) by 2000. Fischer suspects the diving-petrels survived on the island only because the other seabirds nesting in the forest provided a distraction. “Several million seabirds on top of the hill were more attractive than the small colony in the dunes,” he speculates. “They flew under the radar.” 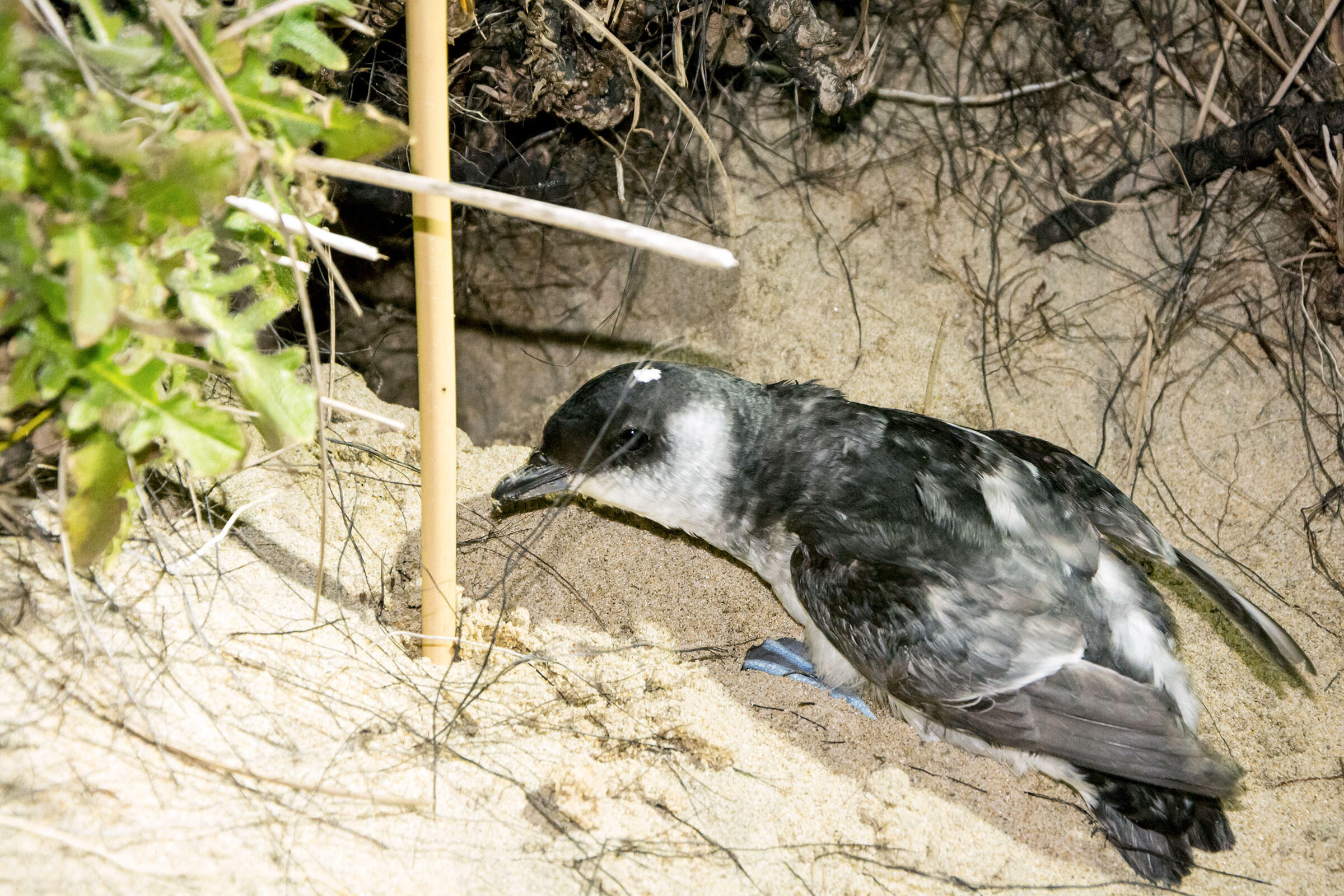 A Whenua Hou Diving-Petrel takes a final look at the great outdoors before retreating into its burrow. Photo: Jake Osborne

The critically endangered population of Whenua Hou Diving-Petrels isn’t yet safe to recover, though: Their dunes are vulnerable to stronger storms caused by climate change. Taylor recalls a major storm in 2003 sent waves on the island that ripped out 10 meters of sand dune—and the birds nesting inside. “Birds washed up dead on the beach that had been caught up inside the burrows when the dunes collapsed. That’s when we realized they were a lot more vulnerable than we thought,” he says. “With climate change, there is a real risk that these storm frequencies and severities are only going to increase over time.”

Now that the species has been officially described, Taylor can devote DOC resources to protecting the birds. The first step is to try to convince diving-petrels currently nesting in the dunes to move farther away from the ocean. “A lot of them are literally on the edge of the dunes” facing the sea, he says. (Biologically, it’s understandable: They can shoot out of the sea and straight into their burrows, and vice versa, without attracting too much attention from predators.) Using methods pioneered by Steve Kress, Audubon’s vice president for bird conservation, the team is trying to lure birds farther back on the dunes by playing bird calls through a solar-powered speaker and by creating artificial starter holes to invite them in. “Thanks to Steve for his innovative work many years ago, we’ll be using the same methodology [he used to attract puffins to an island in Maine] to stop the birds from being buried in sand,” Taylor says.

The colony then has to grow before they take Kress’s methods to the next level: physically relocating chicks to a new island to create a second colony. (The birds return to nest in the same place they were raised.) Fischer is already strategizing about how to best do that, but the population “numbers are so low, you couldn’t consider it at the moment,” Taylor says. “You’d have to double or triple the number before we consider moving chicks,” an effort he suspects will take 20 or 30 years. But all this toil will be worth it if it means preserving these tiny potatoes, the last relicts of New Zealand’s own diving-petrel species.

Hannah Waters is a senior associate editor at Audubon. A low-key birder with a background in ecology and evolution, she’s passionate about chickadees and seabirds. Read her cover story from the Winter 2017 issue, and find her on Twitter: @hannahjwaters.