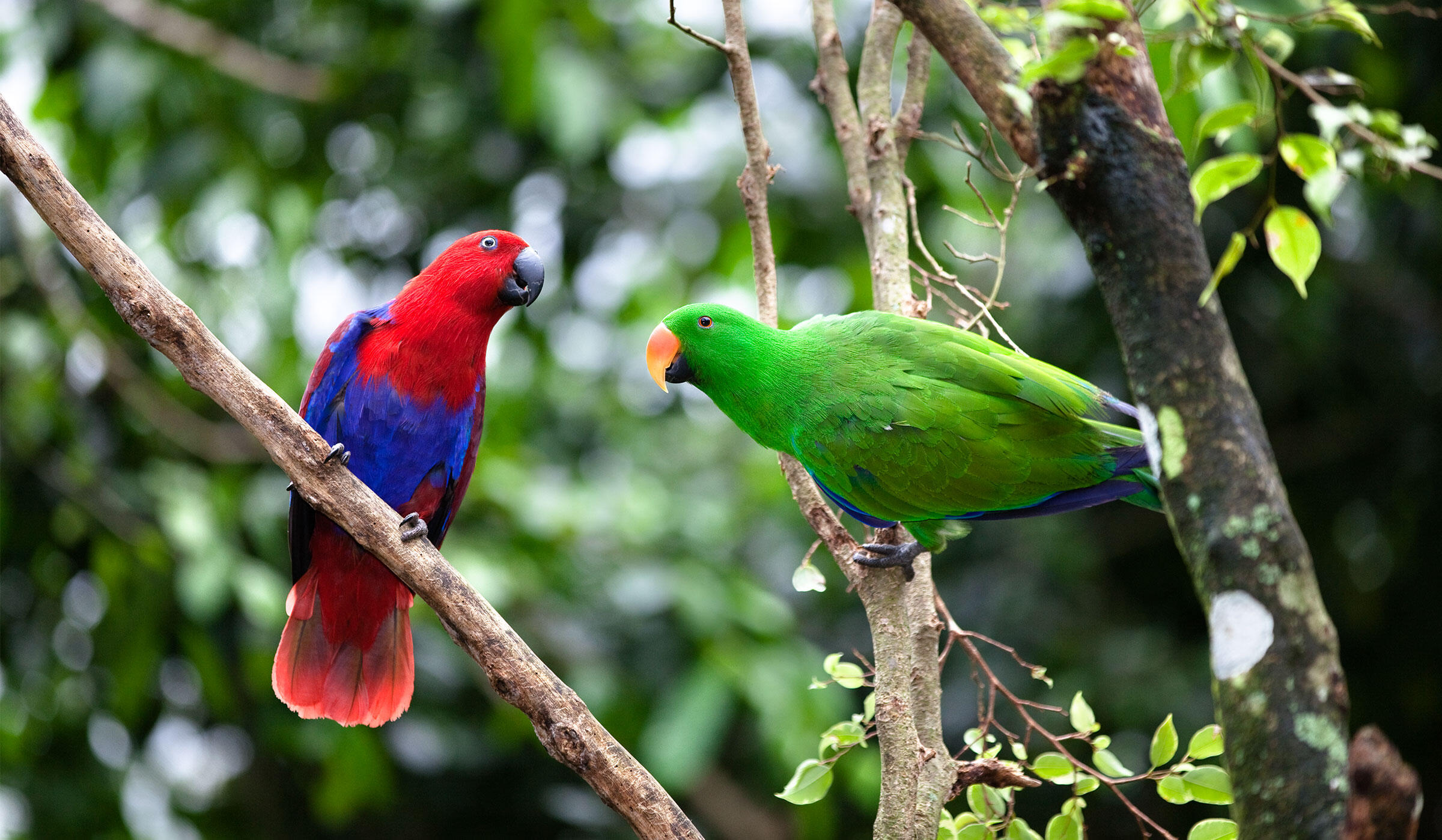 Can you guess which Eclectus Parrot is female and which is male? Scroll down for the big reveal. Photo: Konrad Wothe/Minden Pictures

Like their human counterparts, many male birds insist on being the center of attention. As they strive to impress the females around them, species often flaunt bright, gaudy colors, and sometimes also sport extravagant hairstyles or tail feathers.

Their peacocking, honed by millions of years of evolution, can be so garish that female birds, the very targets of their efforts, fade to the background in many birders' minds.

But this isn't just the Year of the Bird—it's also the Year of the Lady Bird. So it's time we celebrate the female birds who can power clash and dazzle with the best of them, whether with ornate and glitzy feathers or a more subtle, delicate look.

For your viewing and reading pleasure, here's a sampling of some glam female birds—the start of a long list of some 10,000 species worthy of a closer look. 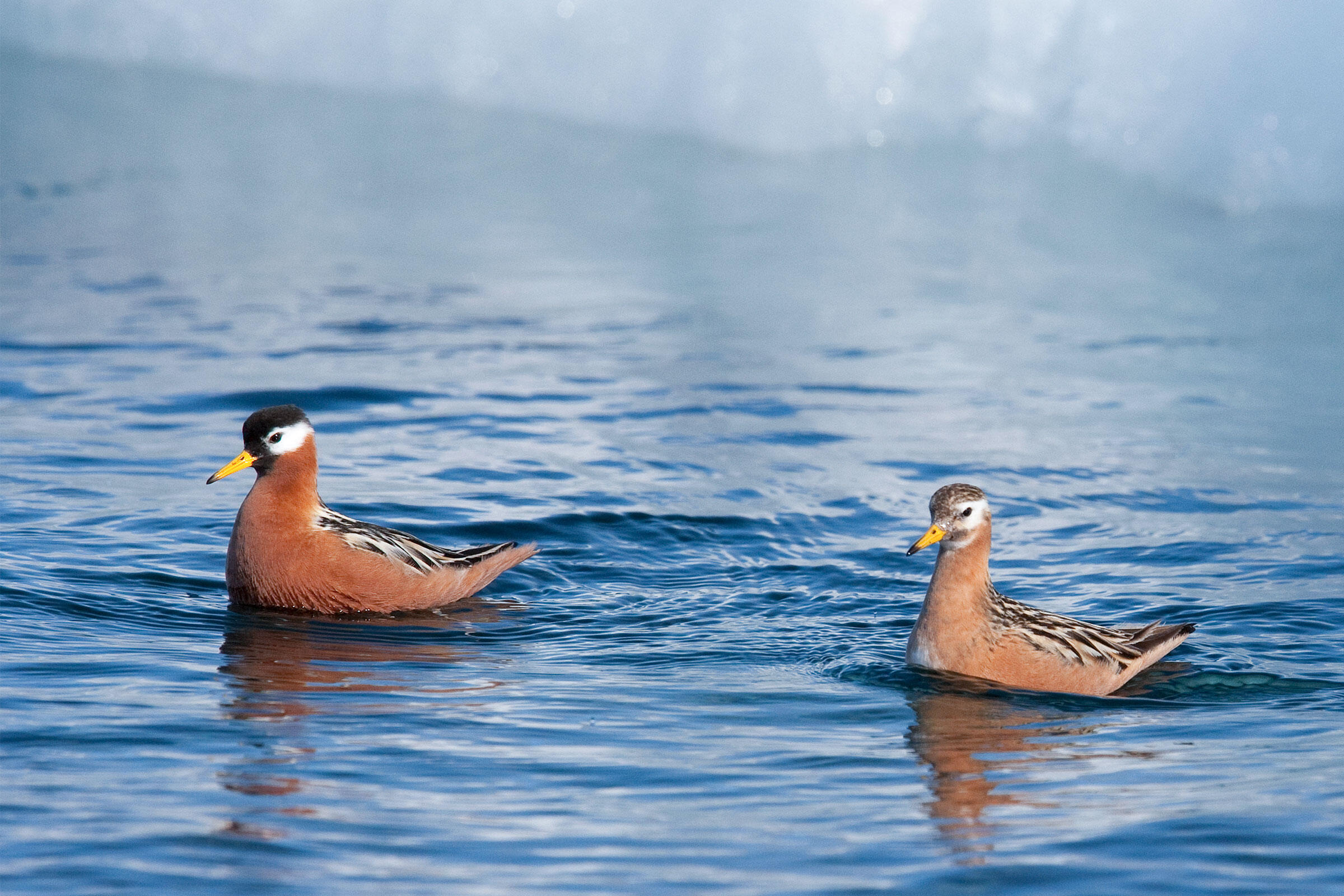 Female Red Phalaropes have copper bodies with milky cheeks, a striking black veil, and mottled stripes running from their nape to their tail feathers. Males are a paler imitation. In another gender-flip, females pursue, fight over, and defend their mates, who are tasked with incubating and caring for their young. 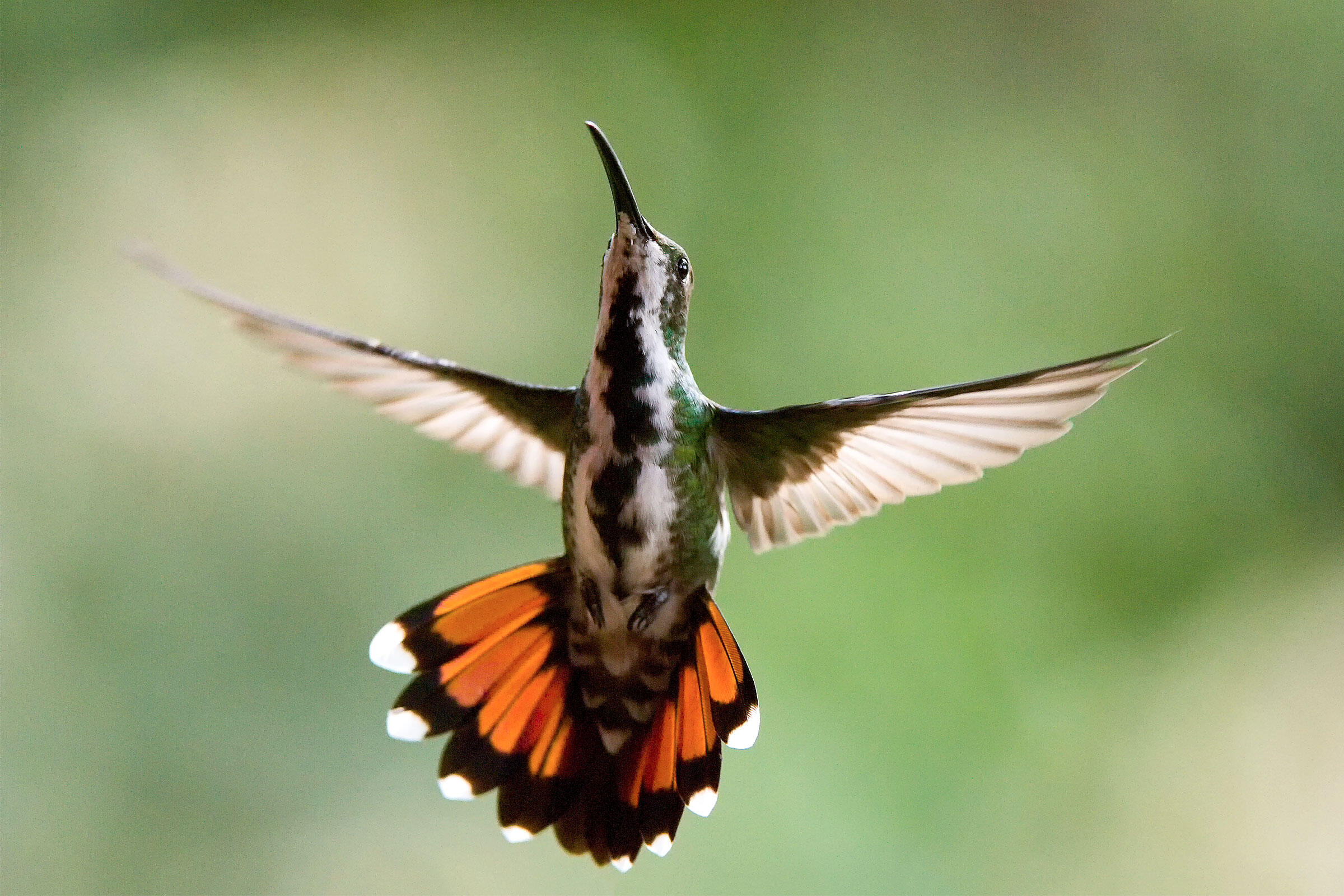 Female Green-breasted Mangos look as delectable as they sound, with jade-green bodies that almost turn gold in the light. They also have a dark aquamarine stripe leading up their downy white belly feathers. Males, on the other hand, are mostly green and lack the female's flashy underside. 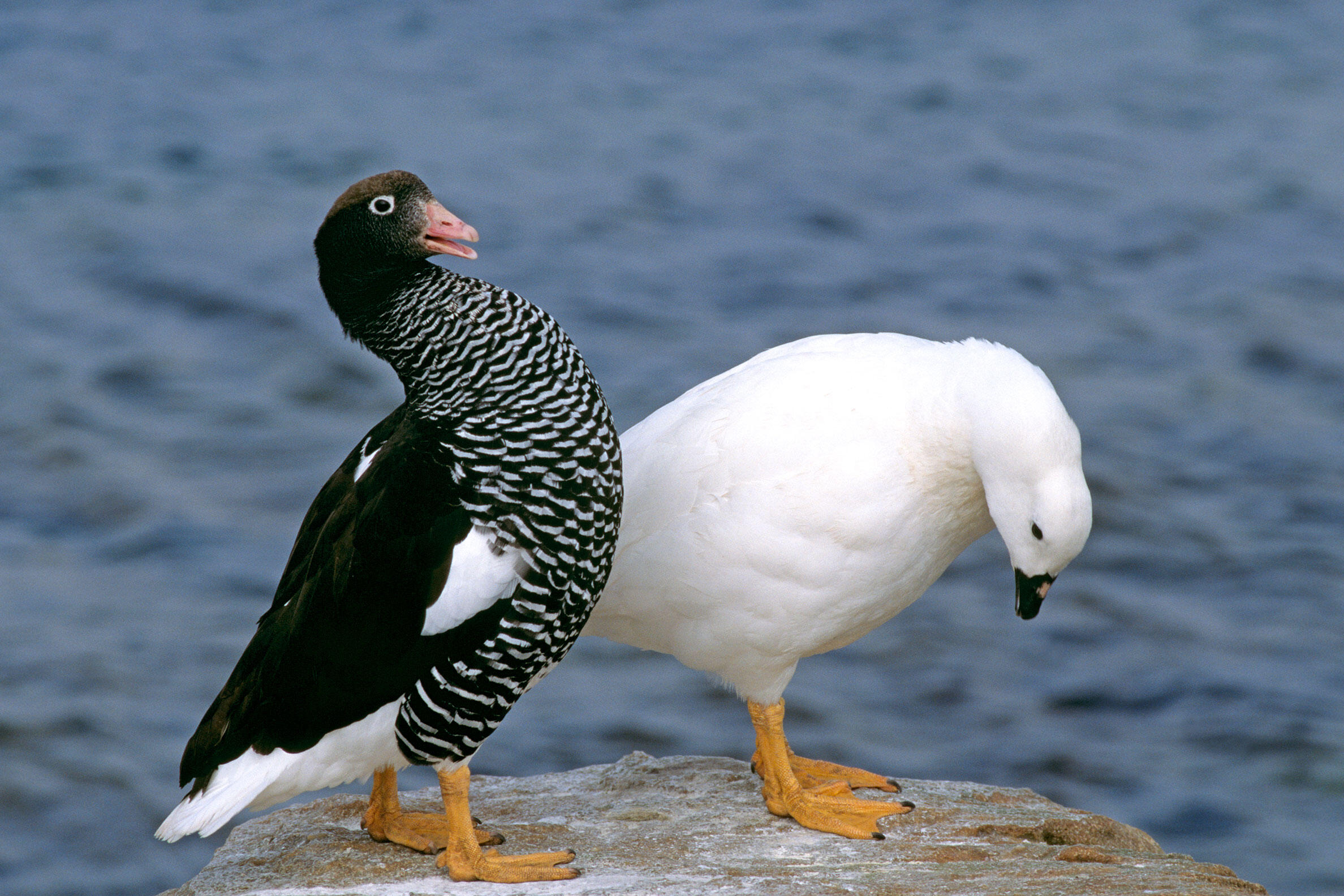 The female Kelp Goose resembles a galactic diva from outer space, with white-ringed eyes and constellations of light-gray transverse lines speckling her body. Her dowdy male counterpart is a pure and fluffy white, kind of like a less-interesting gull. There's no question she’s the star here. 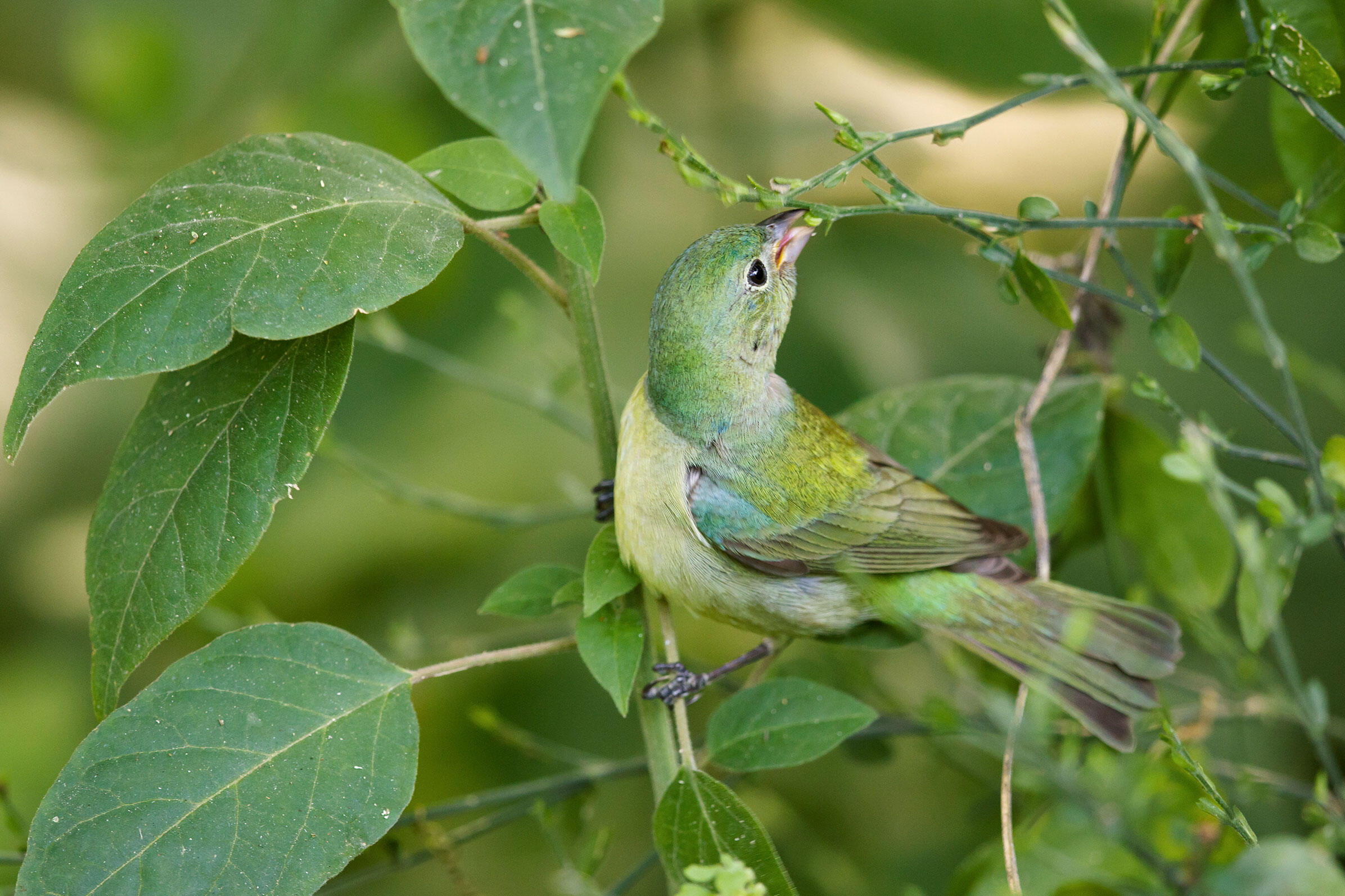 With bright, clashing patches of red, blue, and green, the male Painted Bunting is anything but subtle. The all-green female Painted Bunting, however, is a portrait of understated elegance. If you're lucky enough to glimpse this regal bird, you'll see her chartreuse plumage shift and gleam in the sunlight—a spectacle reserved for the most perceptive observers. 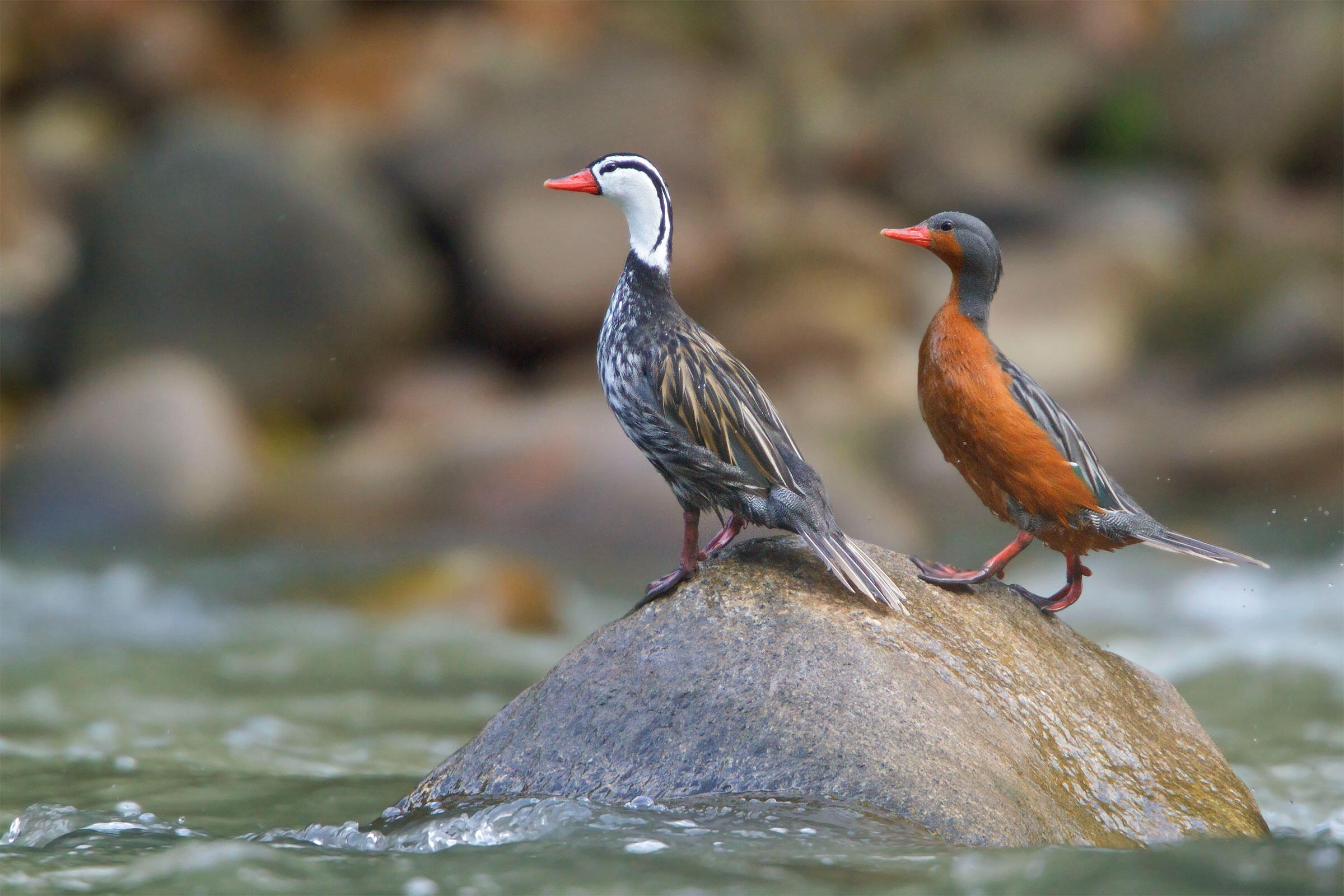 The copper-orange belly of the female Torrent Duck recalls a polished lump of amber, creating a striking juxtaposition with its gray head and salt-and-pepper wings and tail. All of which manages to complement her glinting cinnabar beak. Meanwhile, the male Torrent Duck is mostly white and gray with some Keith Haring-esque squiggles on its head. 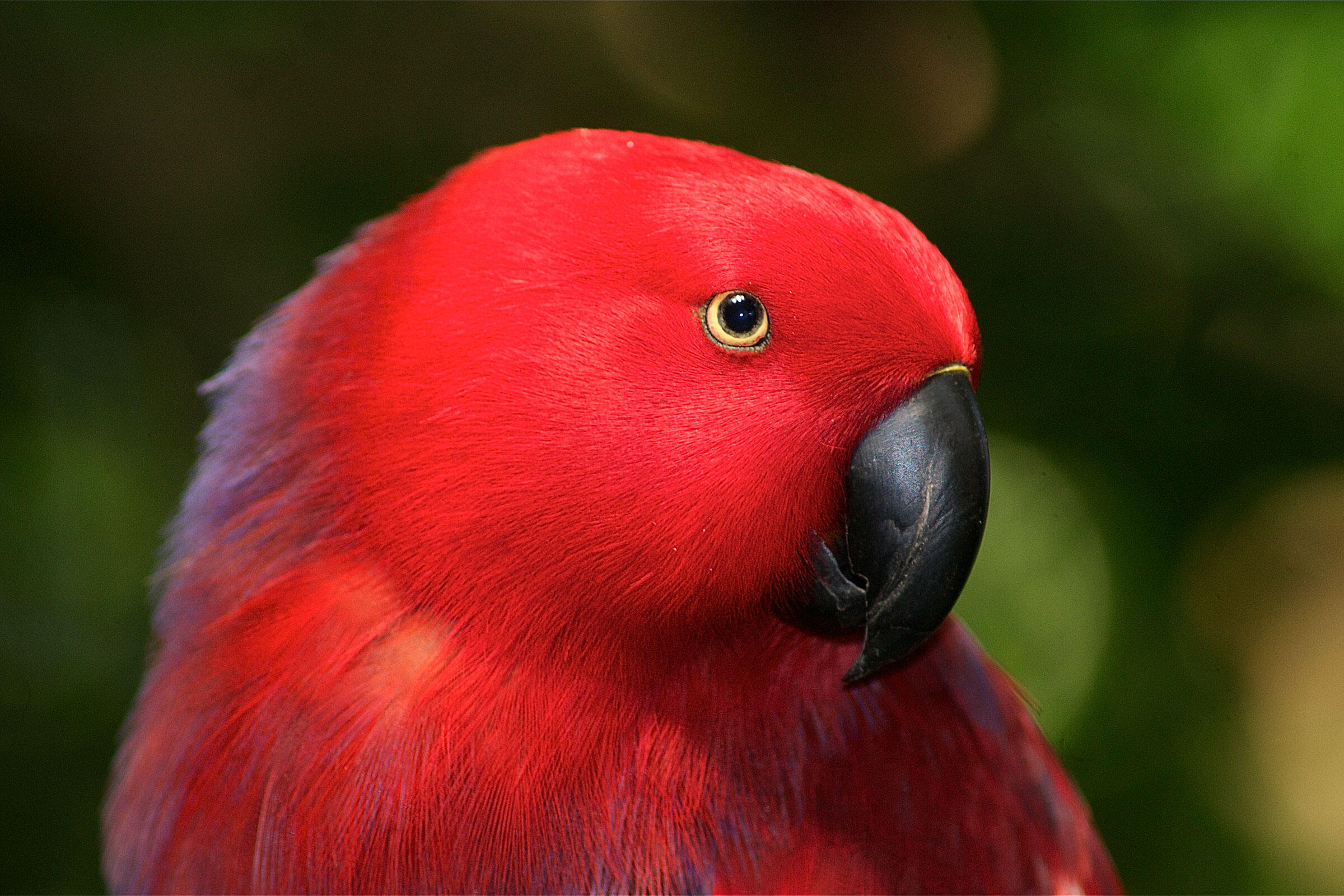 Breeding pairs of Eclectus Parrots look nothing alike, with Gatorade-green males and ruby-red females (see the photo at the very top of this page for comparison). But while the males’ green comes in only one shade, the females’ feathers morph from crimsons and violets to burgundies and electric-blue wingtips. 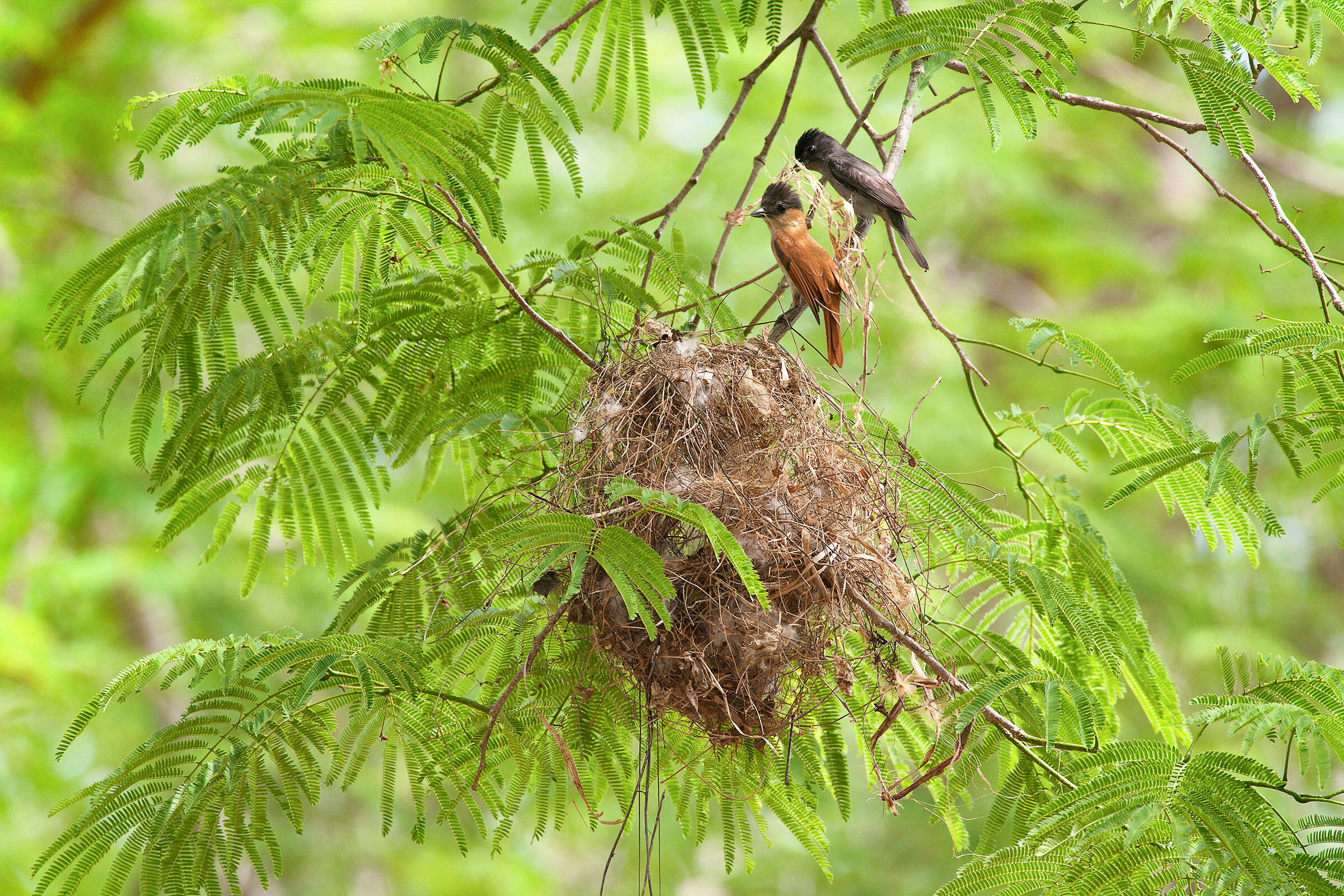 Male Rose-throated Becards are almost entirely soot-gray, save for a small rosy strip around the neck. But their female partners are visual snacks: They resemble cinnamon rolls, with a warm brown crown and wings with a light and creamy chest. 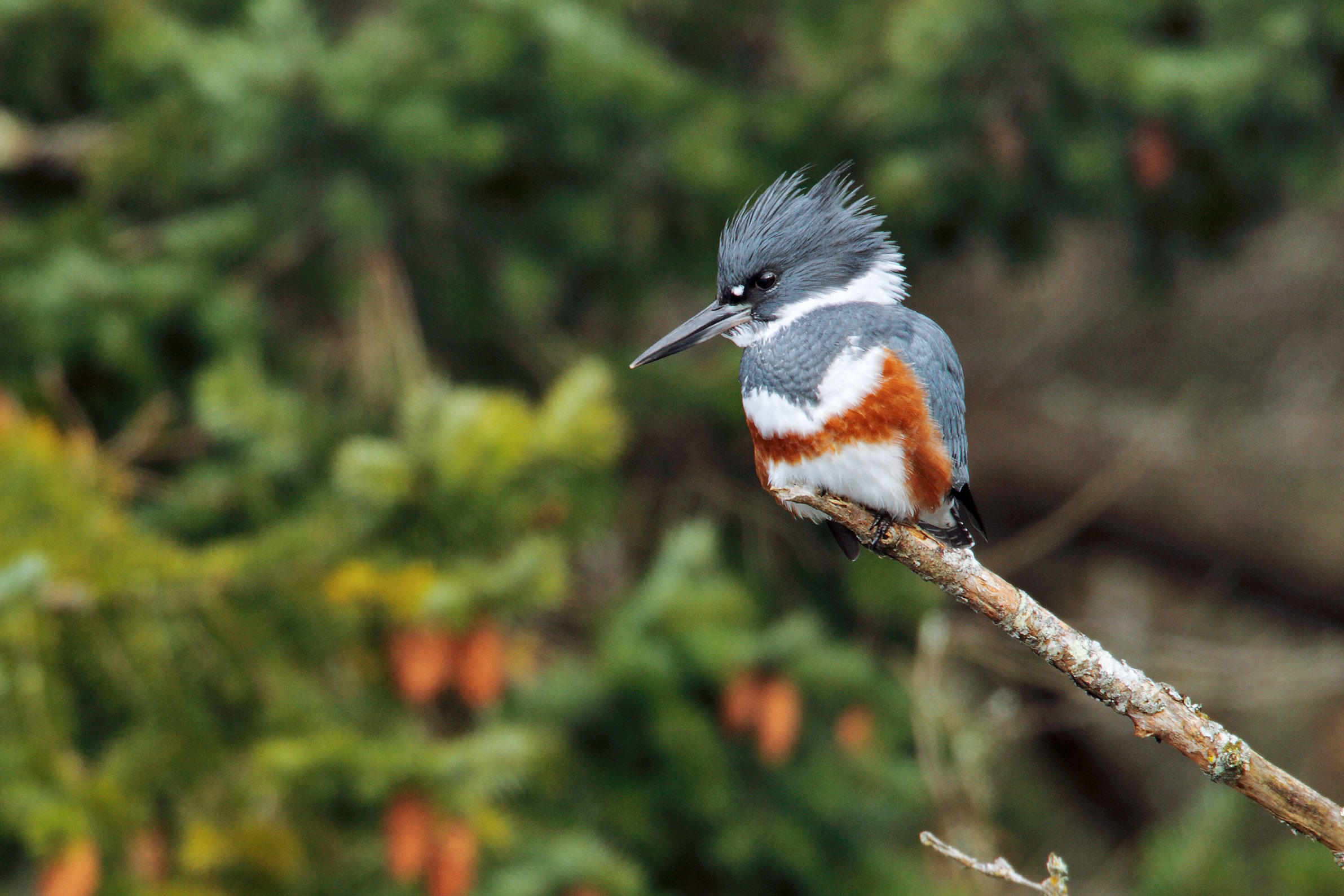 While all Belted Kingfishers have slate-blue bow ties banding their chest, only the females truly live up to the species’ name. These ladies sport an additional rusty band around their lower breast and sides. As any fashion stylist would tell you, a little belt goes a long way. 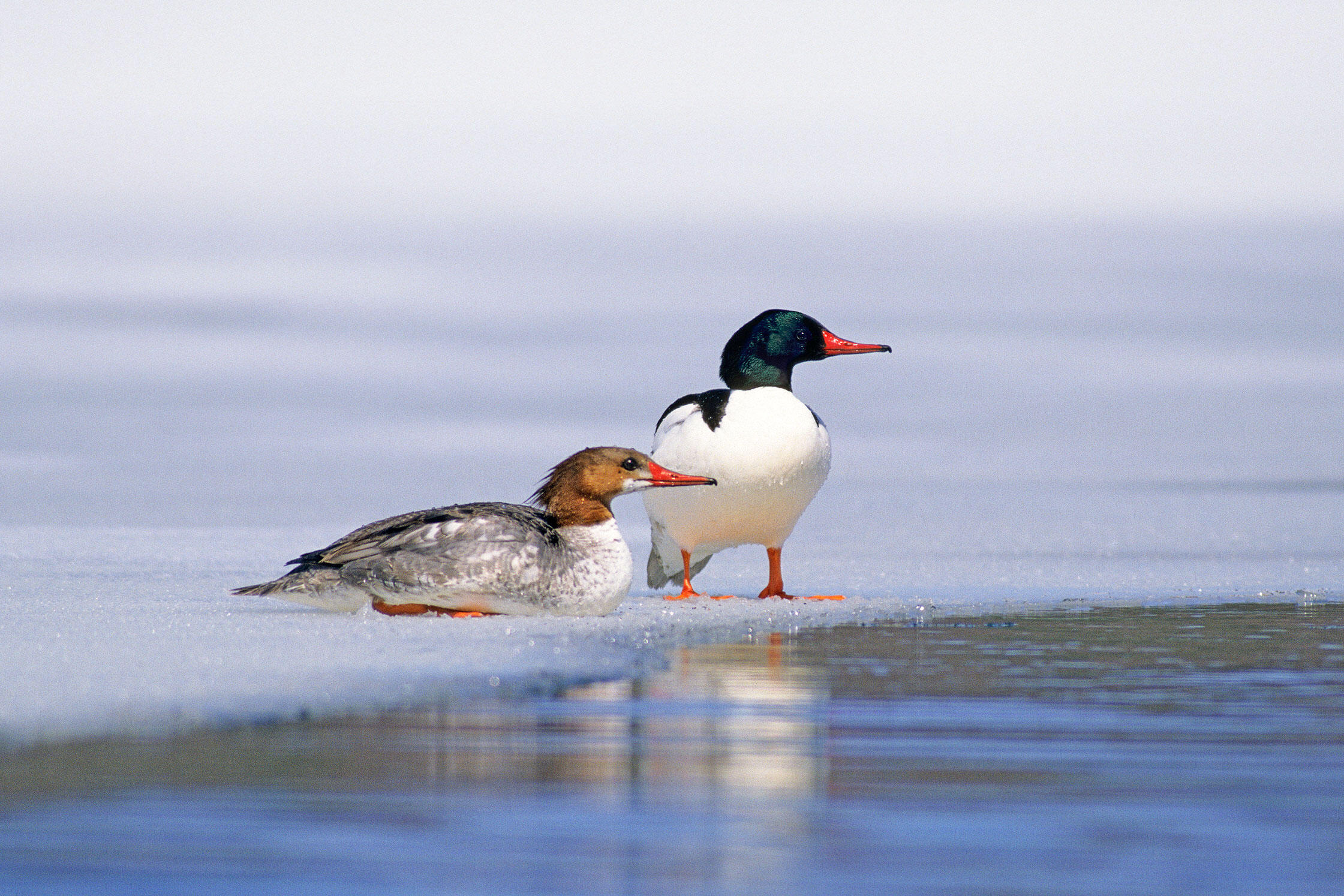 The adult male Common Merganser looks similar to your standard male mallard. A green head, orange bill, etc.—you’re probably bored already. Female mergansers, though, have a frilly ember-colored crown bristling at the back of their heads. Move over, Ziggy Stardust. 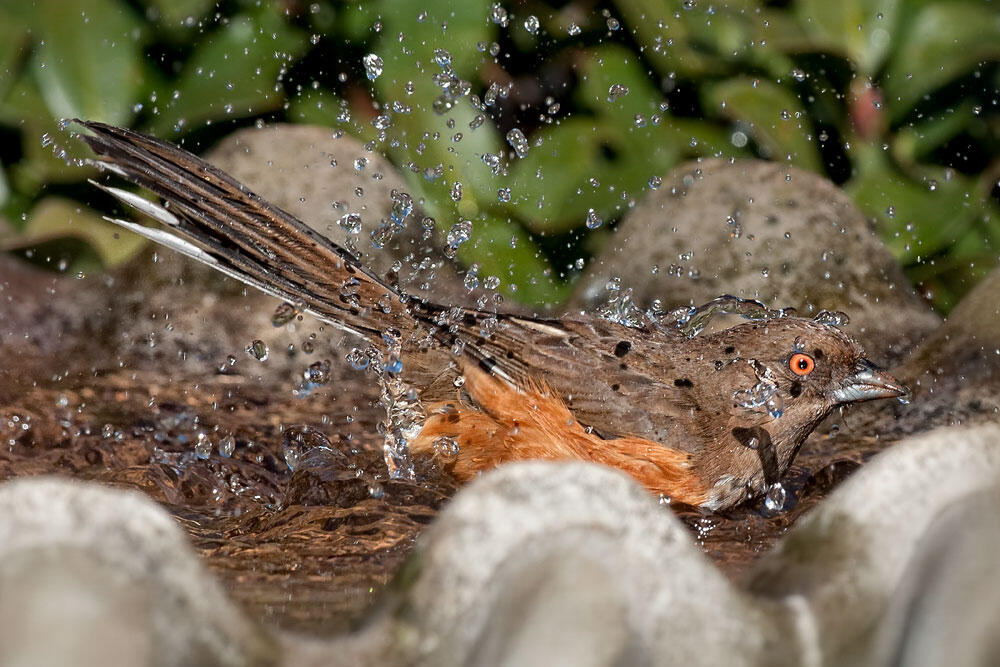 All Eastern Towhees feature autumn colors. Males, with black bodies and orange-white underbellies, recall the spooky hues of Halloween. But females imitate the much more striking changing of the leaves, with rich, dark-brown bodies and maple-colored bellies.