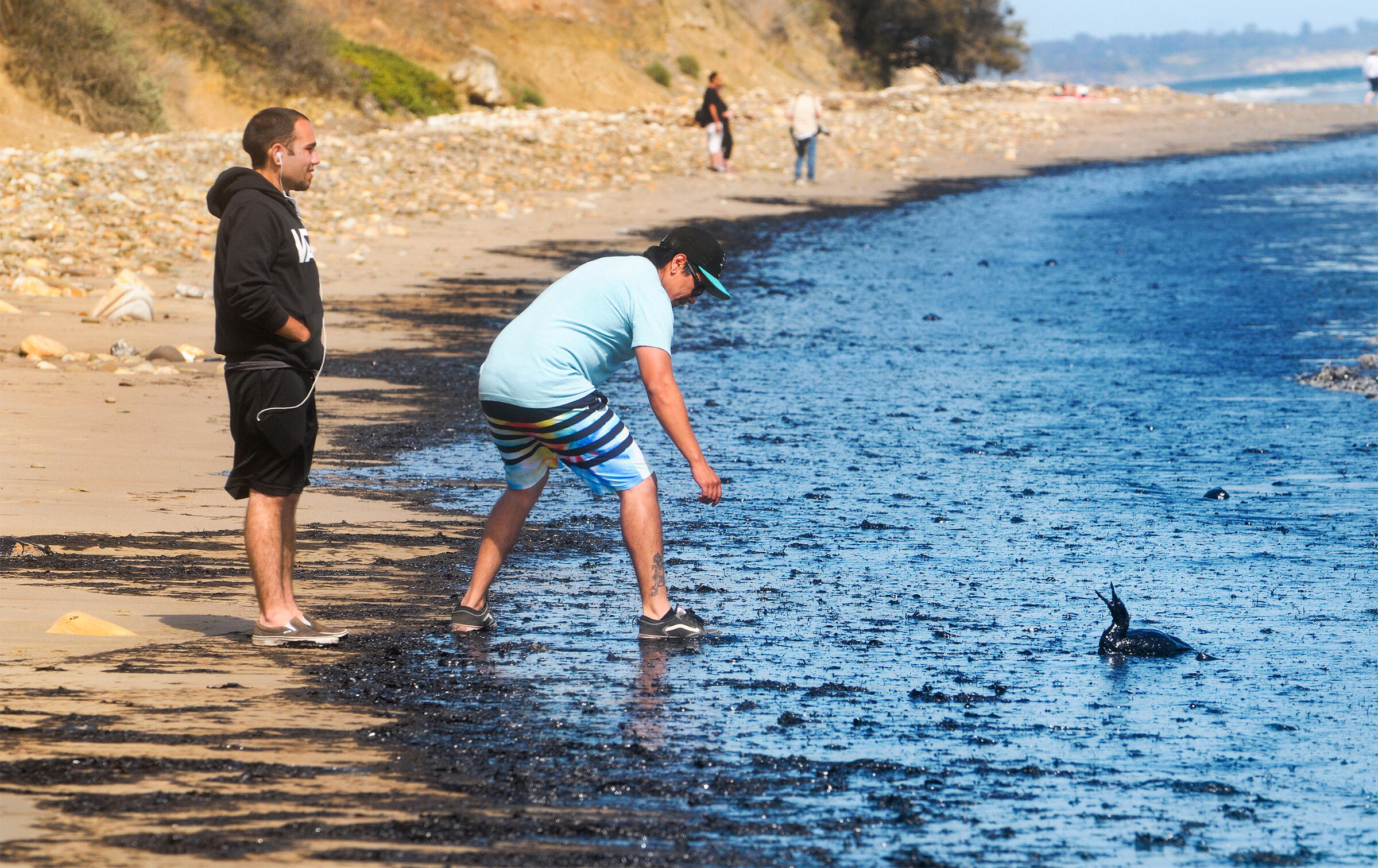 The tens of thousands of gallons of crude leaked into the Pacific could be devastating to the ecosystem and surrounding wildlife.

An underground pipeline near Santa Barbara exploded on Tuesday afternoon, sending a stream of oil out into the open ocean. The broken line was secured hours later, but not before at least 21,000 gallons—and possibly as much as 105,000 gallons—of oil spilled from the line down a culvert and into the Pacific.

The oil is now making its way onshore, covering nine miles of coastline near Refugio State Beach, the state’s Department of Fish and Wildlife said. Locals have started to recover some oil-slicked animals, including birds, fish, and octopus.

“Anytime you have oil spilled into the marine ecosystem it’s a major threat for birds and other wildlife,” Audubon California Executive Director Brigid McCormack said in a statement. “As we learned in the Gulf Spill, and in the 1969 spill not far from the site of this current spill, even a tiny amount of oil can kill a bird. The sad truth is that birds are going to suffer and die from this, and the fact that it was totally avoidable makes it even worse.”

This is the first rupture in the pipeline, which has operated for at least two decades and is owned by Houston-based Plains All-American Pipeline. It’s designed to carry 150,000 barrels (6,300,000 gallons) of oil a day. An integrity check was performed just two weeks ago, though the results of that check are not yet in, the LA Times reported.

"Plains deeply regrets this release has occurred and is making every effort to limit its environmental impact,” the company said in a statement. “Our focus remains on ensuring the safety of all involved.”

Refugio State Beach and nearby El Capitan beach are closed until further notice, according to California Parks and Recreation. California Governor Jerry Brown has issued an emergency proclamation for Santa Barbara County. The Coast Guard is working to clean up the oil (they’d picked up more than 6,000 gallons by Wednesday morning). The Environmental Protection Agency is investigating the cause of the spill, ABC news reported.

The Santa Barbara Audubon Society is currently monitoring the spread of the oil, as there is concern that if it spreads south to Coal Oil Point Reserve, it could affect nesting Western Snowy Plovers—a shorebird listed as threatened under the Endangered Species Act. As of late Wednesday, no oil had been reported on Coal Beach.

“California’s beaches, including the wildlife and recreational opportunities they support, are a major part of our state’s identity,” Audubon’s McCormack said. “Time and time again we’re reminded that the benefits of putting oil so close to our natural treasures are never worth the risk.”

International Bird Rescue is working to help oiled and injured birds. The Santa Barbara Audubon Society is working to monitor nearby beaches in hopes of locating affected wildlife. Oiled birds are unable to regulate their own body temperature, so its critical that birds get attention from trained wildlife rehabbers quickly. If you see an oiled or injured bird, please call 877-823-6926.

Update: This story has been updated to reflect the updated estimate of oil spilled—now thought to be 105,000 gallons, up from 21,000 gallons. We will continue to update as more information becomes available.