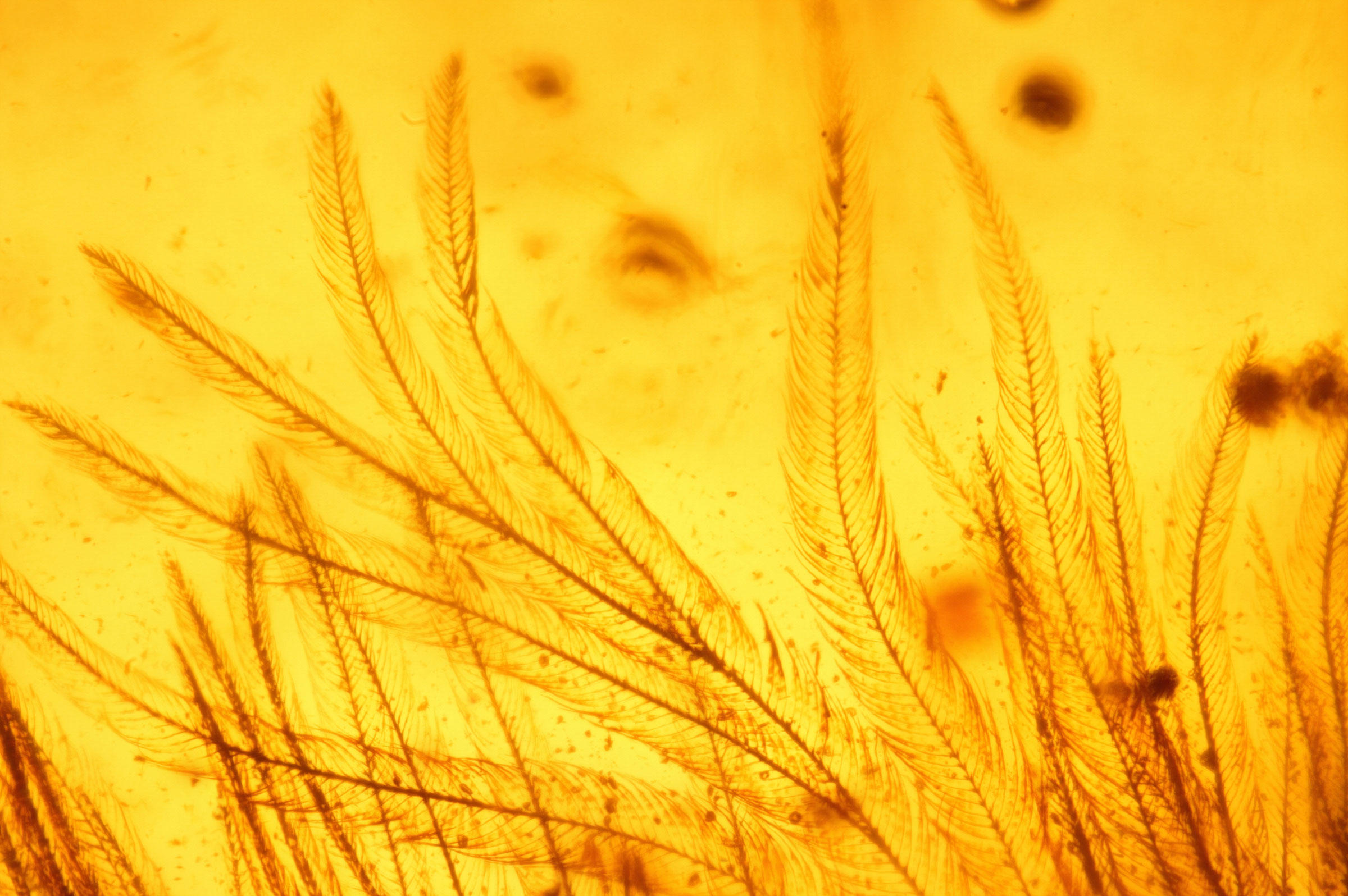 Earlier this year a team of world-renowned fossil hunters stumbled across a pair of 100-million-year-old dinosaur wings that were perfectly mummified in amber. The rare find was being sold at a Burmese market, destined to be turned into jewelry. Just months later, many of the same Chinese and Canadian scientists struck gold again: A feathered dinosaur tail, also encased in amber, was unearthed in that very market in Myanmar. The specimen likely originated in the exact time period as the wings, but belongs to a different part of the dinosaur family tree, the team reports in a paper published in Current Biology this week. Not only is the 1.5-inch (or 37-millimeter) fossil visually stunning, it also sheds light on the early evolution of feathers.

It’s impossible to tell exactly what species of dinosaur this fossil came from. But the research team that analyzed the discovery, led by Lida Xing of the China University of Geosciences and Ryan McKellar of the Royal Saskatchewan Museum, thinks that it could be a non-avialan coelurosaur. Dinosaur classification can be complicated—coelurosauria is a broad taxonomical category that includes modern birds and some of their ancestors, but also many non-bird dinosaurs. A non-avialan coelurosaur is basically a bipedal, wingless dinosaur in the same general category as Jurassic Park favorites like the Velociraptor, Tyrannosaurus rex, Compsognathus longipes, and the ostrich-like Galliminus. Based on the size of the tail, Xing and McKellar believe that it comes from a juvenile individual about the size of a small teapot.

Color-wise, the feathers appear to be a combination of chestnut brown on the upper surface and off-white on the bottom. Some of the original coloration might have worn off over the ages; there are trace amounts of copper present in the sample, which could indicate the presence of a greenish pigment, similar to the one unique to turacos.

The most interesting thing about this specimen (besides the fact that it’s a 100-million-year-old dinosaur tail, preserved in 3-D and living color) is that it unwinds part of the mystery surrounding the evolution of the feather. Plumologists—the fancy term for feather scientists—have a pretty decent idea about how quills first came about. It’s believed that they started as a primitive, single-filament structure, more or less like a fuzzy hair. But how that fuzzy hair evolved to become the complex, interlocking, brilliantly colored feathers we see on modern birds is still up for debate.

Some plumologists hypothesize that tufts of these filaments eventually fused to become a “rachis” (the central shaft or “spine” of a feather). They then developed barbs (the “fibers” or “branches” of a feather), which then grew barbules (the microscopic spikes that hold the barbs together and make the entire unit waterproof). Others believe that the fuzz developed barbules first, and became an interconnected mass of filaments before the rachis evolved to give the feather more structure. The plumes on this tail fossil have well-developed barbules and a very primitive rachis-like structure, which lends credence to that second theory.

For the rest of us, the fact that we get to glimpse the real feathered tail of a teenaged dinosaur is a great marvel in itself. In our previous article on amber bird mummies, we wrote that “with some more luck, scientists hope they can find other such exceptional fossils.” Maybe instead they all just need to start visiting more Burmese amber markets.