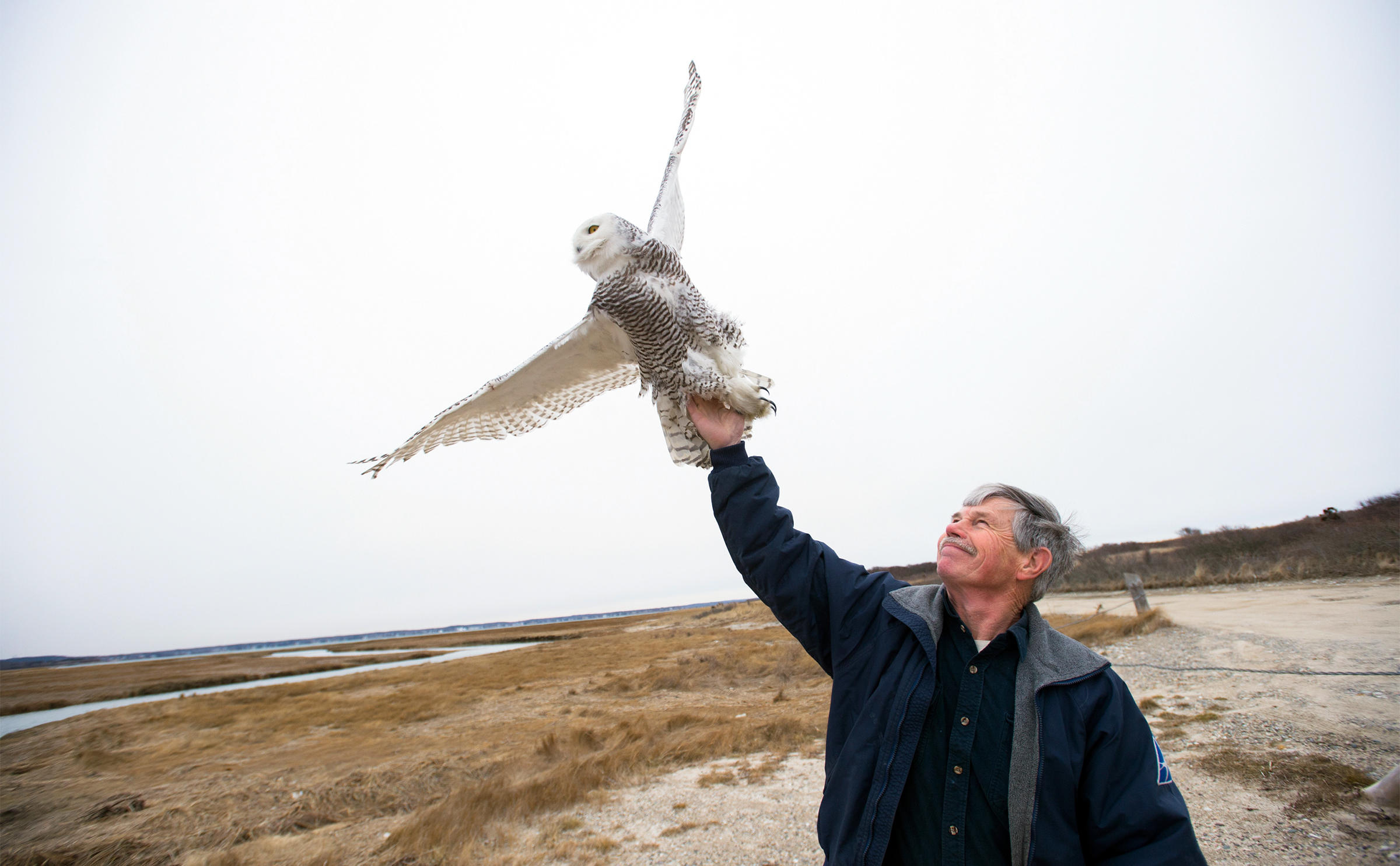 Norman Smith releases a Snowy Owl on a beach in Duxbury, Massachusetts, that had recently been captured at Logan Airport in Boston. Photo: Gretchen Ertl/The New York Times

Thanks to lessons learned during the last Snowy Owl influx, more airports and falconers are prepared to remove the birds humanely.

Depending on whom you ask, the Snowy Owl sitting on a Wisconsin airfield two weeks ago might or might not have been a threat to surrounding planes. Either way, airport personnel shot and killed the Arctic bird. When Janet Wissink of Winnebago Audubon heard reports of the incident, she requested an appointment with airport wildlife managers to hash out a non-lethal removal system for future visiting Snowy Owls. “We just wanted to make something positive out of what did happen,” she says.

The airport’s decision to shoot the owl was perfectly legal, and up until a few years ago, the alternative solution—catching and releasing the bird far from plane engines—was rarely implemented. But thanks to the dedicated efforts of a longtime Snowy Owl rescuer and other concerned birders, the practice is gaining traction. And it’s a particularly crucial effort this year as a United States irruption, or exceptionally large influx of the species, builds in momentum.

The harsh reality of what happens when Snowy Owls land at airports became big news during the irruption of 2013. As the birds swarmed the continent, some confused airports’ wide open spaces with their familiar Arctic tundra. Unfortunately for those birds, many airports own permits to shoot any non-endangered bird that might collide with an aircraft or that otherwise “poses a direct threat to human safety.”

The most famous offender was John F. Kennedy International in New York City, which shot three Snowies in 2013. “The Port Authority doesn’t give a hoot about the lives of Snowy Owls,” the New York Daily News wrote at the time. The airport later defended their choice during three years of legal battles with the animal-rights group Friends of Animals. The courts ultimately decided in the airport’s favor, citing multiple incidents of bird-plane collisions. Despite the ruling, an outpouring of concern over the deaths—largely led by Audubon New York—has spurred the airport to work closely with New York City Audubon and others to find alternatives to killing the birds.

If too close to the tarmac, the birds can be safety hazards, says Scott Weidensaul, director of Project SNOWStorm, a volunteer-run Snowy Owl tracking organization. “Having a Snowy Owl go through the window of a jet isn’t good for anyone.” But that doesn’t necessarily require their deaths. Because they mostly hang out alone, the birds are better candidates for capture-and-relocation than, say, flocks of Canada Geese.

Norman Smith would know—he’s been pulling off this maneuver with Snowy Owls at Logan Airport in Boston for 36 years. The employee of the Massachusetts Audubon Society (which is not officially part of the National Audubon Society) has rescued over 760 Snowy Owls from the facility. In fact, reports of his efforts fueled some of the public backlash against JFK, and helped convince the New York hub to shift into non-lethal owl management. “People started asking, ‘Why can’t you do what they do in Boston?’ ” he says.

The Logan Airport procedure is a months-long collaboration between Smith and the staff. From October through January, he regularly checks in with airport officials to see how many Snowies have been drifting through the grounds. The birds will perch anywhere—on buildings, on poles, even on planes—at any time, so Smith drives to the airport mornings and late afternoons to see if he can spot any of the stark white figures. When he finds one, he sets up a small netted device that dangles a caged mouse or rat, and then sits in his car to wait. A Snowy flies into his trap eight to 10 times in a typical year, though during the 2013 irruption, Smith caught 120. He then drives the bird to a nearby beach for release.

Smith’s method isn’t typical for Snowy-catching in airports. In most cases, employees from the Department of Fish and Wildlife and Department of Agriculture Animal and Plant Health Inspection Service (APHIS) complete each rescue, sometimes with the help of volunteer falconers. Smith does things a little differently because of how long he’s been on the job. He traps alone; he also has an airport driver’s license and security badge, as well as insurance coverage from Mass Audubon.

Smith can end up in battles of willpower, waiting for a perched bird to fly into his trap for eight or ten hours. The process requires patience—a quality few airports have.

Besides giving him a security clearance and any protective measures he needs, Logan also gives Smith a lot of time. Smith can end up in battles of willpower, waiting for a perched bird to fly into his trap for eight or ten hours. At that point, Smith loses and drives home empty-handed. The process requires patience—a quality few airports, including the one Wissink met with, have. “It’s more complex than going out there with a shotgun,” Smith says.

Though staff from the Wisconsin airport had hesitations about investing time and resources into non-lethal removal, it ultimately wasn’t difficult for Wissink to convince them otherwise. For one, the airport had already endured severe public backlash for the initial shooting, and they wanted to avoid that down the line. Secondly, Wissink brought four falconers and a bird rehabilitator to the meeting with her. Only trained professionals can work with wild birds in this stressful context, and airport staff weren’t aware this many prepared and able individuals were willing to help. In fact, it was one of the falconers who reached out to Wissink and the other trained handlers in the first place, asking if Winnebago Audubon might help change the airport’s strategy.

As it turns out, they did—the meeting was a success. From now on, the Wisconsin airport will reach out to the falconers whenever a Snowy Owl flies in; the falconers will work with staff to catch the bird, and then they will release it elsewhere or take the Arctic native to the bird rehabilitator if it needs help.

Despite the extra time, Snowy Owl rescue strategies are worth the work, Smith says. All it takes is a determined individual or group to convince airport staff that there is a better way to prevent owl collisions. And for the owls, which have seen such a severe population dropoff that the species was recently deemed "vulnerable" to extinction by BirdLife International, every saved life counts. Even Smith’s grandkids, who accompany him on many releases, see the value of his work. “They understand at a young age these birds come from the Arctic, and the Arctic is changing,” Smith says, "and they’re wondering if when they grow up, the Snowies will still be here.”

With So Many Snowies to Study, Scientists Are Discovering How Little We Know About This Bird

After a banner year for Arctic rodents, the greatest snowy owl explosion in half a century has descended on the eastern United States—and it’s teaching us about these nomads from the north.&nbsp;

A new ruling seals a 2014 decision that permits the Port Authority to sidestep the Migratory Bird Treaty Act.