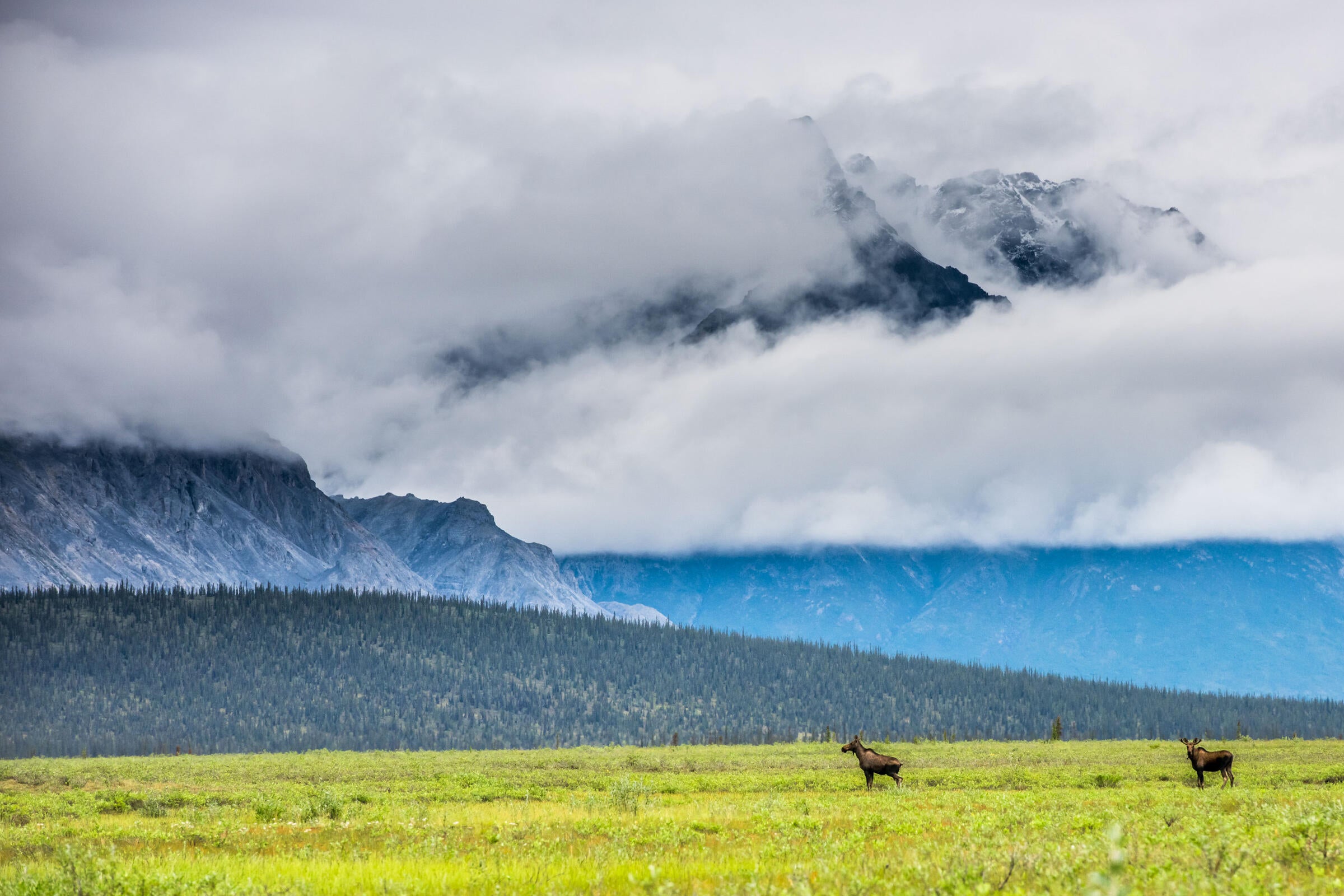 After decades of attempts, Wednesday will bring the first-ever sale of oil leases in the wild Alaskan haven, with a tundra-damaging seismic survey soon to follow—unless a judge steps in.

As the end of 2020 approached, it looked plausible that this week’s first-ever sale of oil leases in the Arctic National Wildlife Refuge—the climax of a three-year campaign by the Trump administration and decades of efforts by pro-industry politicians to open the area—would be a dud.

After all, the price of a barrel of oil may have bounced back after dipping below $0 last spring, but it still took a 20 percent hit for the year. Another issue: Nobody knows for certain how much oil lies beneath the Alaskan refuge, and drilling in such a harsh, remote area would be challenging. On top of all that, activists have made it clear that any companies that bid on leases there will face stiff resistance in courts of law and public opinion.

Bids on the 22 available tracts were due last Thursday and the U.S. Bureau of Land Management will unseal them on Wednesday. For the incoming Biden administration, the ideal outcome would be an anticlimactic one in which the BLM has no bids to open. The president-elect has said he’ll protect the refuge from drilling, and that would be much easier to do if companies don’t buy any leases—essentially 10-year contracts giving them the right to develop their claimed parcels—two weeks before he takes office.

But now that scenario seems to have evaporated. In a highly unusual twist, the State of Alaska is set to jump into the bidding to ensure oil drilling remains an option in the refuge even if oil companies sit out the sale. The Alaska Industrial Development and Export Authority (AIDEA), a state-owned economic development corporation, voted on December 23 to spend up to $20 million on the lease sale. The state could eventually partner with oil companies to develop its leased parcels.

With a bidless sale now looking unlikely, the many opponents of drilling in the refuge are looking to the courts for a last-minute reprieve. The National Audubon Society, other conservation groups, and the Indigenous Gwich’in sued months ago to stop the lease sale. They argued that the administration’s plan wasn’t compatible with the purpose of the refuge, broke environmental laws, and ignored Indigenous peoples’ concerns. Now they are asking the federal district court for an injunction to halt the sale—as well as a planned seismic survey to map out underground oil deposits—until the court can reach a ruling on the larger case. A judge will hear arguments on Monday and is expected to issue a ruling on Tuesday.

While the Arctic Refuge has faced development pressure throughout its 40-year existence, it hasn’t confronted a more intensely perilous week than this one. “It’s like the second-to-last episode of a miniseries, where all the action has built up and there are multiple things happening, and yet there’s no resolution at this point,” says Natalie Dawson, executive director of Audubon Alaska. “We’re waiting on a court decision. We’re watching to see if anyone bids on the leases. We’re waiting to see what the new administration will do. And all three of those things are kind of rotating around each other at this point.”

The sale is the culmination of what critics call a deeply flawed process that puts at risk a fragile landscape and one of the world’s last remaining vast, intact ecosystems. Republicans in Congress inserted into a 2017 tax bill a requirement that the BLM hold two or more lease sales covering at least 400,000 acres of the Arctic Refuge’s coastal plain. The bill gave the BLM until the end of 2021 for the first sale, but the administration has been scrambling since then to implement the lease sale, spurred by the prospect of what now has come to pass: Trump failed to win a second term and will be replaced by a president who vows to keep development out of the refuge. The Interior Department has likewise been rushing to complete the necessary seismic surveys that can only be done in winter to avoid causing the most damage to the fragile tundra.

The coastal plain between the Brooks Range and the Beaufort Sea is a wild expanse of tundra that each year hosts millions of migratory birds from six continents. It’s where the Porcupine caribou herd, one of the continent’s largest, migrates each spring to birth calves. Polar bears den in the snow and ice along the coast and river edges, while muskoxen, wolves, and other wildlife roam the rolling plain.

It’s also, like the rest of the Arctic, a region changing fast as the planet warms due to fossil-fuel combustion. “We shouldn’t be exploring drilling anywhere,” says Martha Raynolds, an arctic plant ecologist at the University of Alaska Fairbanks (UAF). “And the last place on Earth that the U.S. should be exploring drilling is the coastal plain of the Arctic Refuge.”

For Raynolds, the 3D seismic testing is a more immediate concern than the lease sale; companies will need permits before they can develop their leases, but heavy equipment could begin crawling across the tundra this month for the seismic survey. The BLM in December issued a draft finding that the Kaktovik Iñupiat Corporation’s plan to survey about 350,000 acres of the coastal plain would have no significant environmental impact. But critics say the planned survey, which calls for driving massive trucks across the tundra, will damage permafrost and harm vulnerable plants and animals. Scars are still visible on the refuge landscape from a 1980s survey that used earlier 2D technology.

The survey could be particularly damaging because, rather than traveling over sea ice as is typical, it calls for transporting heavy equipment 137 miles overland from Deadhorse, Alaska, including 49 miles in the refuge. “That will create severe impacts because of the number of vehicles and the weight of the vehicles,” says Raynolds, who published a paper in 2020 on the impacts of seismic testing in the refuge, including harm to plant communities and to the permafrost underlying the coastal plain. “Even relatively minor traffic on tundra has an impact.”

The fact that lease bids were due before companies had modern seismic data to inform their investments casts doubt on proponents’ narrative that generating income for the federal government was the main motivation for developing the refuge.

Supporters of the leasing program said it would be a windfall for taxpayers. U.S. Sen Lisa Murkowski, the powerful Republican who introduced the legislation for the leasing program, said at the time it was “a tremendous opportunity for both Alaska and our country.” The Congressional Budget Office (CBO) estimated that lease bids and rents from the coastal plain would raise $1.8 billion over a decade, with the proceeds split evenly between Alaska and the federal Treasury.

But a 2019 analysis by the New York Times, based on data from other lease sales on the North Slope of Alaska, concluded that the leasing program might yield just $45 million for the federal coffers. The actual take could be much lower; the Times’ estimate assumed all 1.5 million acres of the coastal plain would be leased at $54.80 an acre, but only 1.1 million acres are up for lease in Wednesday’s sale, and the BLM has set the minimum bid at just $25 an acre.

As some experts see it, the idea that opening the refuge was about generating federal revenue was a fiction spun by Murkowski and other Alaskan political heavyweights to help bring their state desperately needed income. In addition to receiving half the leasing proceeds, Alaska also stands to gain well-paid jobs in the oil services industry, supporters say. Alaska’s economy is tightly bound to oil revenue—it typically represents more than half of the state budget and around 90 percent of discretionary spending—but production has been declining for decades. Flagging oil markets have fueled a multi-year budget crisis deepened more recently by the plunge in crude prices caused by the coronavirus outbreak; by one estimate Alaska lost around $693 million in oil revenue in 2020 due to the pandemic.

“Leasing in the refuge is basically a kind of federal subsidy to Alaska,” says Philip Wight, a UAF historian who studies the state’s energy industry. “The reason this is happening is because Alaska adopted a certain model of funding its government. That model is in crisis and this is a last grasp to continue that way of life.”

Despite oil revenue’s huge role in the Alaskan economy, the overwhelming majority of public comments leading up to the AIDEA board’s vote were opposed to using public funds to buy leases. Neither that opposition nor accusations that the board had rushed the decision and cut the public out of the process kept its members from voting unanimously to authorize the funding. “I know of no example in Alaska history where the state has bought federal leases to ensure they’re developed,” Wight says.

That AIDEA board members felt the need to buy up leases is evidence of how challenging and risky—economically, politically, and reputationally—it would be for oil companies to develop the refuge. Pressed by Gwich’in leaders and other activists, the country’s largest banks have said they won’t finance oil and gas projects in the refuge. Those opponents say that any company planning to take part in developing the coastal plain can expect an ugly public fight. And while Arctic oil reserves may have looked like a bonanza decades ago, new techniques like hydraulic fracturing, or fracking, have made it more economical to drill in less remote parts of the world. Bigger-picture, the oil industry’s very future is in question; BP, which recently sold off its Alaska operations, reported in September that global oil demand may have peaked in 2019.

Even if Wednesday’s sale draws only state-sponsored bids—that is, if the court allows it to proceed—it will still be a significant victory for those who have relentlessly pushed to give drillers access to the wildlife refuge. Seeking oil there in today’s market doesn’t make sense financially, according to Dawson. “But those of us in Alaska have been wringing our hands for the past few months because it doesn’t need to make sense financially,” she says. “This is something that the old guard of the Alaska industrial development community has wanted for a long time.”

Correction: An earlier version of this story incorrectly said that the Congressional Budget Office estimated $1.8 billion in revenue for the federal government from leasing in the Arctic Refuge. We have updated it to clarify that the revenue would be split evenly between the State of Alaska and the federal Treasury.