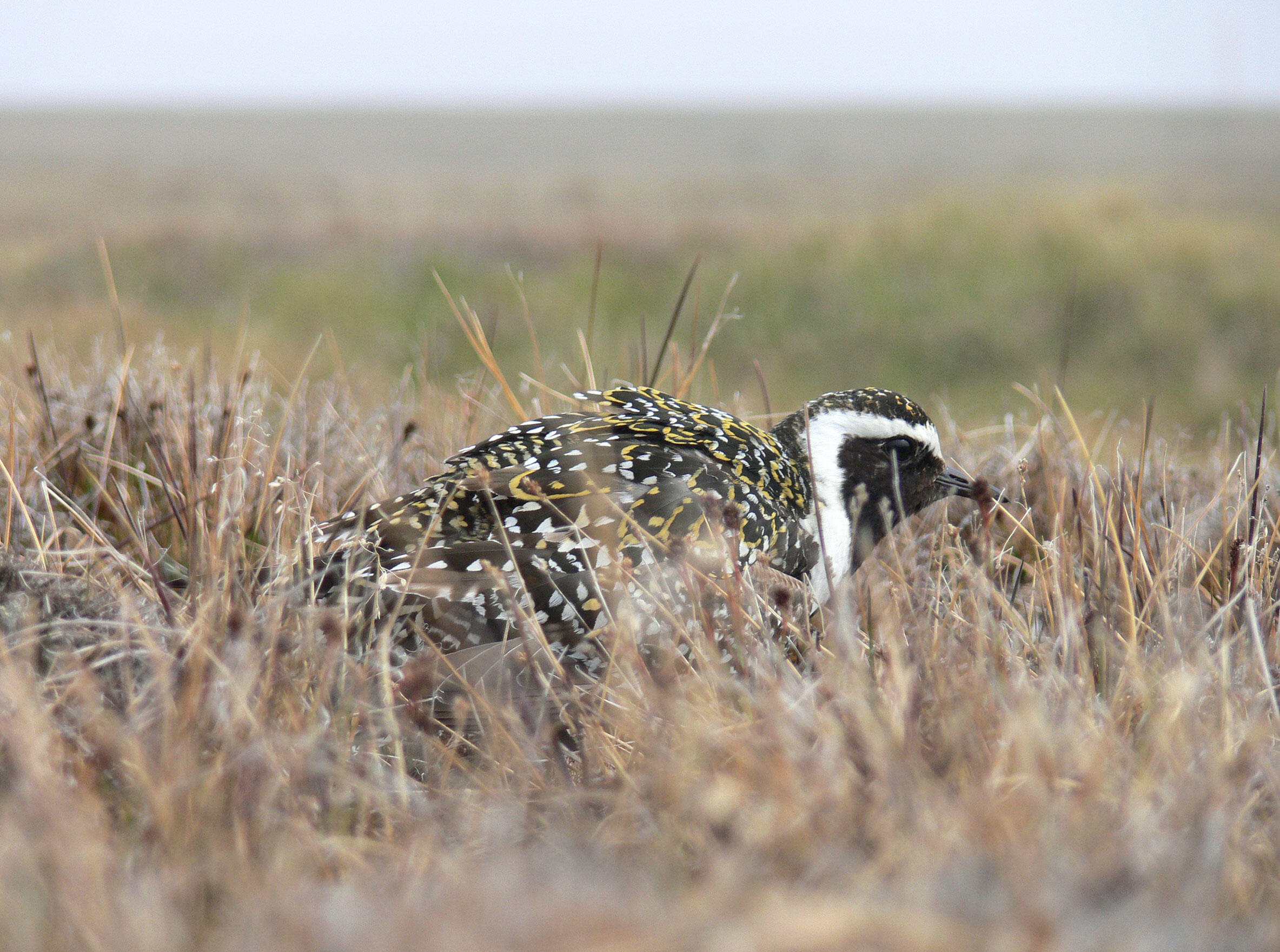 An American Golden-Plover performs a distraction display to deter a potential predator near its nest in Barrow, Alaska. Photo: Vojtěch Kubelka

The Arctic Is No Longer A Safe Haven for Breeding Shorebirds

Predators now wipe out 70 percent of shorebird nests in the far north, a shift in historical patterns that scientists pin on climate change.

Every year, intrepid shorebirds endure long, taxing journeys to the Arctic to raise their chicks. Tens of millions of birds comprising dozens of species, like Bar-tailed Godwits, Pacific Golden Plovers, and White-rumped Sandpipers, zig-zag many thousands of miles across oceans, highways, farms, and mudflats to reach the far north, where predators and diseases are few and insects abound. But as temperatures ramp up in the Arctic, the region is no longer the frozen refuge it once was.

Over the past two decades, predation of shorebird eggs has risen dramatically in the Arctic and the temperate north, according to a review published in Science last week. The authors found that where temperatures have risen most precipitously, nest predation, chiefly by foxes and aggressive seabirds called Parasitic Jaegers, has soared. According to the study, daily nest predation has doubled in the north temperate zone and tripled in the Arctic proper over the past 70 years.

This was not what the scientists expected to find when they started the study. “The initial question had nothing to do with climate change,” says Tamás Székely, an evolutionary biologist from the University of Bath and one of the study’s authors. Instead, he wanted to know how patterns of nest predation across the globe have changed over time. He predicted that increases in predation would correspond with landscape-level human impacts like pesticide application and urban sprawl, he says. It was only when Székely saw that the biggest changes were taking place in the most remote corners of Siberia that he began to consider the impacts of climate on nest predation. “In these habitats, hardly anything has changed apart from climate,” he says.

Looking back at historical records spanning the 20th century, Székely noted that shorebirds nesting at higher latitudes lost fewer eggs to predators. “Birds go to the Arctic to breed because it’s a safe haven,” he says. Even traveling to the high Arctic from the subarctic can make a big difference, according to prior research published in Science, which showed that birds breeding in the farthest north can reduce their predation risk by more than half—presumably because there are fewer predators in colder climes.

But not anymore. In the past two decades, predation in the Arctic has spiked, according to the new analysis. The massive dataset pooled studies, conducted between 1944 and 2016, which together tracked more than 30,000 nests from 111 shorebird species across 140 locations on every continent. (Whew.) At nine long-term study sites surveyed across the 20th and 21st centuries, from Greenland to Finland to Alaska, nest predation has increased at every location. This change puts these birds on an evolutionary crash-course known as an ecological trap—when organisms are unable to recognize that a habitat is unsafe or of low quality. For centuries or more, shorebirds have nested in the Arctic; the recent change in predators happened so quickly that the birds haven't had time to adapt.

“They still fly there hoping to raise chicks, but there are predators waiting for them,” says Vojtěch Kubelka, lead author of the study, who recently completed his doctorate in evolutionary ecology at Charles University in Prague. “The Arctic represents an extensive ecological trap for breeding shorebirds.”

Warming temperatures could increase nest predation for a number of reasons. Predators from the south, like the red fox, are creeping into northern breeding grounds as they follow warming temperatures and food from human settlements; in some places, they're edging out Arctic foxes. At the same time, unseasonal thaws disrupt population dynamics of the small mammals northern predators like to eat.

The global trends described in the new paper aren’t playing out evenly at all shorebird nesting sites.

In particular, snow conditions have brought a string of bad years for lemmings, burrowing Arctic rodents that resemble extra-furry hamsters, which undergo erratic (and poorly understood) cycles of spectacular booms and busts. During a peak lemming year, “every blade of grass was literally alive with them,” remarked a 19th-century traveler to Norway. But over the past 20 years, snow melting and refreezing more frequently during winter has interfered with lemmings' feeding grounds, causing them to starve, Kubelka says. Arctic predators, like foxes and breeding jaegers, rely on lemmings to survive. In place of lemmings, they can turn to shorebird nests.

The global trends described in the new paper aren’t playing out evenly at all shorebird nesting sites. “There is a lot of variability, even between Canada and Northern Alaska,” says Brad Andres, the national coordinator of the U.S. shorebird conservation plan for the U.S. Fish and Wildlife Service. Many researchers monitoring Arctic shorebirds, particularly in North America, have not seen an increase in predation play out on the ground, he says.

Paul Smith, who studies Arctic birds at the National Wildlife Research Center in Canada, agrees. He has returned to the same site, an island above the Hudson Bay, to monitor nesting shorebirds for 20 years and hasn’t seen a decrease in nest survival, which he would expect with higher nest predation. However, nest survival has been disconcertingly low, even if it hasn’t worsened, Smith says. “It’s something I’ve been worried about for a long time." At his long-term study site, fewer than one in 10 White-rumped Sandpiper chicks will hatch in a typical year, he says. “For that site, for that species, that’s a clear ecological trap.”

Likewise, lemming dynamics might be more nuanced at a regional scale. Although global populations have shown dramatic declines, they seem to be rebounding in the last two years, according to a global analysis that hasn't yet been published, Smith says.

Predators, like Arctic foxes, much prefer lemmings to other food. “I presume they’re very juicy,” Székely says. If the rodents do reappear in large numbers, that will be at least some good news for Arctic shorebirds.

Arctic-Breeding Shorebird Populations Are Plummeting, with No Single Culprit

As Arctic shorebird numbers decrease, scientists blame farming, hunting, development, climate change—or all of the above?