This story isn’t about a bird; it’s about a hole that a bird once filled.

On a Monday in late June, as the Massachusetts resort island of Nantucket abounds with vacationers who use the word “summer” as a verb, a small team plants dead quails in about two dozen man-made holes on a grassy moor. Conservationists have carried out this odd ritual every year here for the last quarter-century.

The quails are for the American burying beetle, an inch-long carrion eater that once thrived across 35 U.S. states and three provinces in Canada. Today, it survives only in scant patches across about 10 percent of its historic territory.

Collection records show that burying beetles disappeared gradually over the 20th century, starting at least as early as the 1920s. But entomologists only noticed the losses in the 1980s. Alarmed, they launched wide-scale surveys. In the entire eastern U.S., the only wild beetles left were found on Block Island off the coast of Rhode Island, and by 1989, the U.S. Fish and Wildlife Service (FWS) listed the species as endangered. Since the 1990s, Lou Perotti, the wiry, tanned conservation director at Rhode Island's Roger Williams Park Zoo, and other researchers have been working to establish a second, backup eastern U.S. population on Nantucket Island.

“Here we go, into the honeymoon suite,” says Perrotti, as he drops a prospective beetle couple into a hole. The pair have been carefully matched together using what researcher Brandon Quinby from Purdue University calls “the equivalent of a stud book.”

Next, Perrotti dispenses each quail, head lolling, into a hole and covers it. The two beetles will mate and then lay eggs in a side chamber in the soil. When the larvae emerge, they will co-parent—rare behavior for insects—by feeding the dead bird to their young.

Ideally, once the kids emerge from the hole, they will sniff out their own wild carcasses to bury and breed without the scientists’ help. The carcass, though, needs to be a Goldilocks weight between about 80 and 200 grams: Too big and it’s hard for a beetle to bury and preserve; too small and it won’t be enough food for many larvae. But as Perrotti and others trying to save the American burying beetle have learned, finding carrion that's just right isn't so easy.

American burying beetles probably survived on Block Island because of several lucky factors: stable grassland habitats, a population of Ring-necked Pheasants—the juveniles are the perfect size—plus an absence of mainland scavengers like raccoons that quickly snatch up carcasses. That’s why scientists picked Nantucket, an island with similar habitats and similarly few scavengers, as a reintroduction site.

As they try to save the beetle, though, researchers have also puzzled over what caused this once-ubiquitous animal’s range map to dry up, even as other burying beetle species haven't experienced similar declines. A 2002 paper reviewed various theories: the use of the pesticide DDT, for example, and the spread of artificial lighting. But what the FWS calls the “prevailing” theory today is that thanks to habitat changes, the American burying beetles just can’t find bodies in the narrow weight range they need to bury, which can include small birds, mammals like voles or Norway rats, and even fish and reptiles.

Competing scavengers, which are thriving in many areas in the absence of larger predators, are a part of the problem. But scientists also believe the number of carcasses available has declined overall. Starting with the 2002 study, researchers have proposed a roster of species that at one time produced fledgling or adult carcasses that fit the burying beetle’s needs, but might not be as available anymore. The Greater Prairie-Chicken, Northern Bobwhite, Wild Turkey, and black-tailed prairie dog, for example, all suffered vast contractions in the last hundred years, as noted in the most recent FWS species status assessment for the beetle (perhaps some heartening news: Wild Turkeys have been making a comeback in New England).

Other suitable animals are simply gone. Carolina Parakeets, for example, once lived in the beetle's historic range in the Midwest and Southeast, but the last one died in 1918. Then there’s the gaping silhouette of the Passenger Pigeon, a bird that once blackened the skies in flocks of hundreds of millions or even billions before going extinct in 1914. Fledgings would have served as baby-beetle food, and according to one estimate, more Passenger Pigeons lived in the beetle’s historic range than there are birds—total, of all species—overwintering in today’s United States. In a cruel twist, then, the beetle’s decline could be a ghostly echo, a haunting that has lingered long after that prior extinction.

Then there’s the gaping silhouette of the Passenger Pigeon.

The Passenger Pigeon theory is a circumstantial case, says Quinby at Purdue. Still, he and Perrotti agree: Multiple causes likely worked together, and in areas that used to host dense Passenger Pigeon populations, American burying beetles would have thrived. “I think everyone in this field kind of accepts that idea,” Perrotti says.

Recent, depressing developments on Nantucket Island, he says, also support the broader theory that the beetle’s fate hangs delicately on whether it finds the right carrion.

When conservationists first brought the beetles back to Nantucket, they planted captive-bred beetles alongside quail every year. Later they stopped adding new captive-bred beetles and switched to just trapping wild beetles already on the island, pairing them up two by two, and giving them a quail to raise young. By 2011, with the burying beetle population on Nantucket growing, Perrotti’s team eased back even more. They limited quail handouts, hoping the beetles could scrape together enough wild carrion to use—Nantucket has fewer pheasants than Block Island, but still has towhees, jays, and doves, plus small mammals like baby rabbits, voles, and rats, all of which could be viable food sources.

But that wasn't enough. By 2014, the Nantucket beetles plummeted to less than a fifth of their former numbers, suggesting, as Perotti argued in a 2016 study, that a deficit of dead things in the right size range really can undermine a beetle population. The team returned to releasing captive beetles and provisioning them with quail. “It’s the nature of the beast,” Perrotti says, sighing. “We’re trying to put back, in a snapshot, what took millions of years and forces we don’t understand.”

On a national scale, the American burying beetle now faces an uncertain future even after decades of conservation work, including similar breeding efforts at the St. Louis Zoo.

Because their endangered status bedevils oil and gas industry projects in states like Oklahoma and Nebraska, since 2015, organizations including the Independent Petroleum Association of America have pushed for the beetle to be delisted entirely. This May, they notched a victory when FWS proposed down-listing the species to “threatened,” a move that conservation groups like the Center for Biological Diversity adamantly oppose.

The rationale, summarized in FWS documents, projects that future rates of urban expansion and conversion of grassland habitat—which both reduce available birds and mammals, among other impacts—will only affect a small fraction of existing beetle territory, and thus, the beetle isn't currently in danger of extinction. (Overall, grassland birds have declined by more than 40 percent since the 1960s, as habitat has been converted.)

But that doesn't mean the remaining beetles have a rosy future. Though land use changes won’t matter much, climate change will. By 2040, temperatures could be too hot to support the main southern populations in and around Oklahoma. Further projected warming would hit the northern beetle stronghold in Nebraska, too. And that, the agency bleakly concludes, means the beetle is likely to become endangered again no matter what they do. “Maintaining protections from something like land use won’t do us much good if the main threat is from climate change," says Kevin Stubbs, an FWS biologist in Oklahoma.

Perrotti greets this with a sigh. Among other objections to the down-listing proposal, he isn’t sure the land-use calculations really show what would happen to beetles after their habitat is changed. “The less biodiversity, the less death, which means less resource,” he says. “Also, they’re touting our reintroductions as helping to bolster the range of the species, and that’s not true. We have not been able to establish one self-sustaining population within its historic range.”

That’s what the population plummet on Nantucket showed, he says, packing up his gear after another year of beetle planting. Some beetles on Nantucket do find their own birds or small mammals to breed. But to survive long term on the island—to avoid falling back into the hole left by Passenger Pigeon, other birds, and a few centuries of habitat disruption—he believes the American burying beetle needs him and his team to help out.

And he's ready. “It doesn’t cost us a lot to go out there every summer," Perrotti says, “and we feel it’s worth it.”

Audubon magazine is a nonprofit dependent on the generosity of our readers. You can support our journalism by making a donation today. 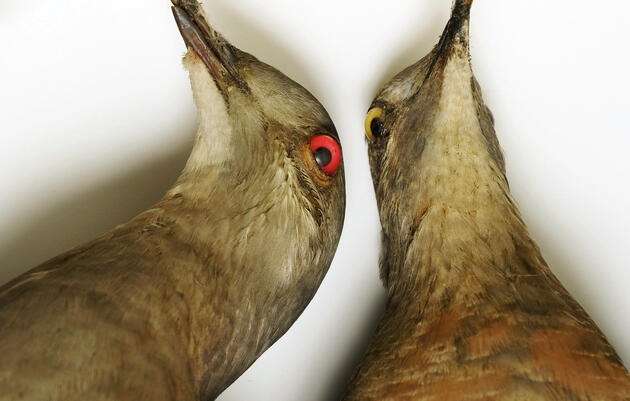 Why the Passenger Pigeon Went Extinct

And whether it can, and should, be brought back to life a century after it disappeared. 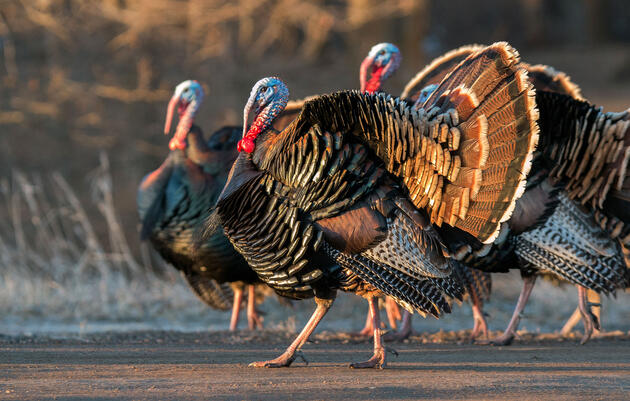 You'd be hard-pressed to find a turkey in the Northeast 50 years ago. Now hundreds of thousands roam suburbs where they thrill and bully residents. 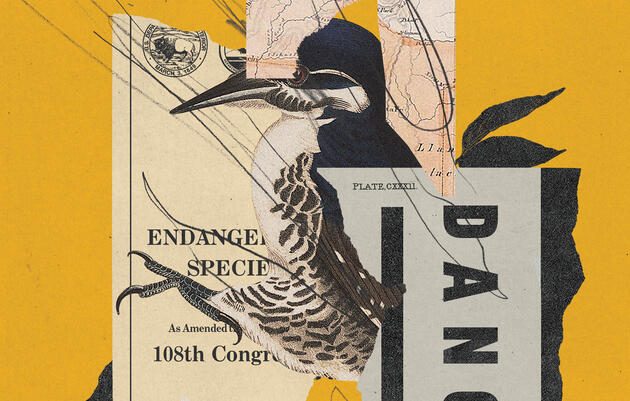