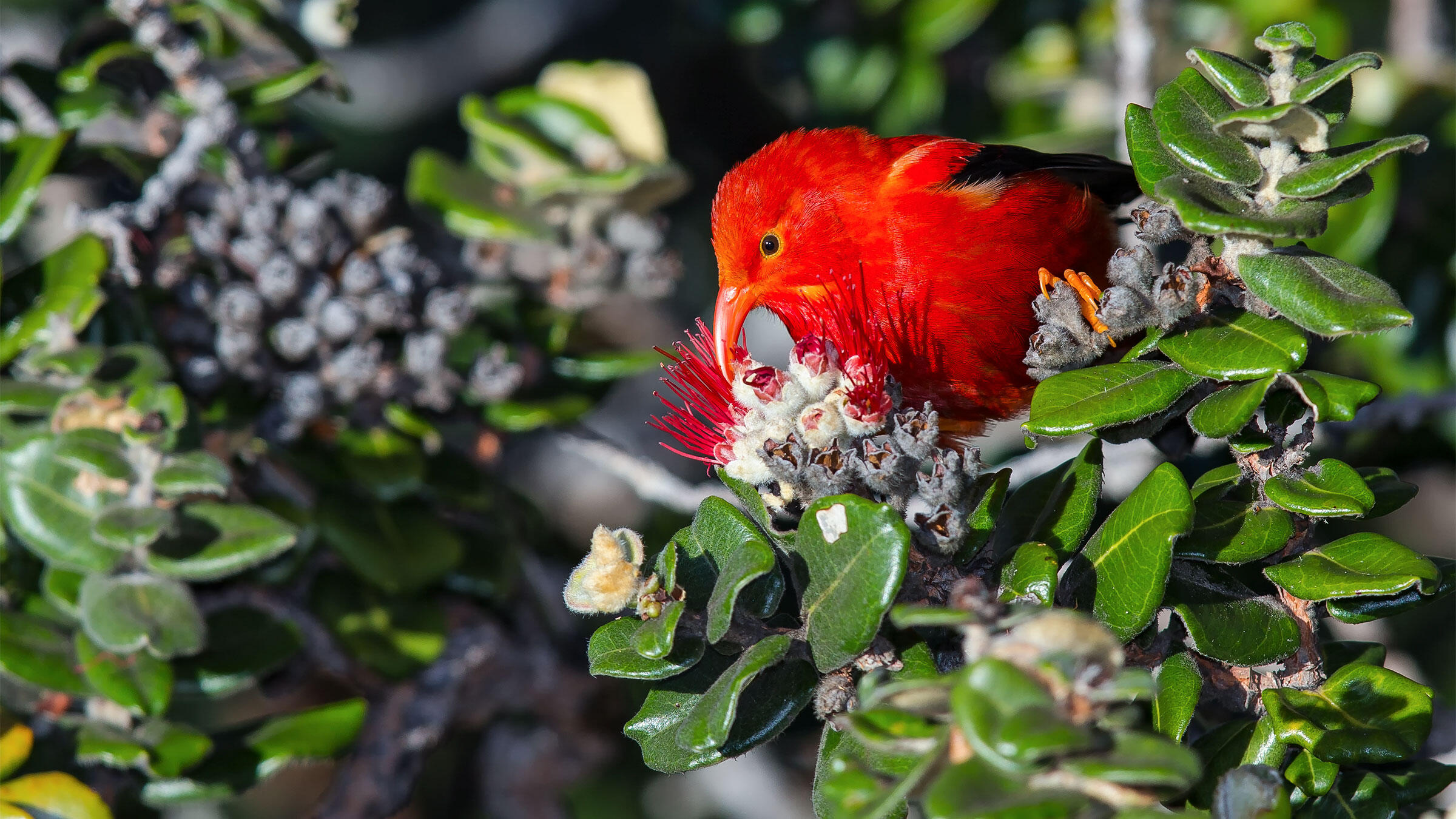 The 'I'iwi, a Besieged Hawaiian Forest Bird, Is Now Listed as Threatened

Placing the native honeycreeper under federal protection marks what scientists hope will be the beginning of a long road to recovery.

The 'I'iwi, or Scarlet Honeycreeper, was once among the most common birds in Hawaii. Its lipstick-red plumage brightened all of the archipelago’s major islands, and its whistles, creaks, and gurgles filled their forests from the seashore all the way up to the treeline.

Today, aside from a few individuals, 'I'iwi are limited to just three islands, and they face a host of hardships. Driven out of lowland forests by malaria, the birds are now being harried uphill into shrinking patches of refuge as a warming climate allows the mosquitoes that transmit the disease to move up the mountainsides. If that weren’t enough, non-native mammals prey on 'I'iwi, and a tree fungus is devastating the bird’s main source of food and shelter.

Now the federal government is stepping in to help. The U.S. Fish and Wildlife Service (USFWS) announced Tuesday that it is listing the 'I'iwi as threatened under the Endangered Species Act. The agency will convene scientists and other stakeholders to put together a recovery plan for the birds. Unlike an endangered listing, the threatened designation means extinction is not imminent—there are about 600,000 'I'iwi left. “Listing a species as threatened is, more than anything, a call to action,” says Holly Richards, a public affairs officer for USFWS. “It means that we have some time to bring this species back if we all work together.”

More than 50 species of honeycreepers once made their homes in Hawaii, each of them evolved from a single ancestor and adapted to suit the conditions of the geologically young islands. They evolved in isolation, so when humans showed up and brought along new animals and diseases, the birds had no natural defenses. Now just 17 known honeycreepers survive in Hawaii, and 15 of them are already listed as federally endangered.

The direst threat is avian malaria. Some honeycreepers appear to be developing a measure of resistance to the disease, but it kills 95 percent of the 'I'iwi it infects. Scientists think malaria arrived in imported birds in the early 20th century. It is spread by the Culex quinquefasciatus mosquito, which arrived in 1826. Many 'I'iwi die quickly after being infected by malaria, and others succumb to predators or starvation after the disease weakens them. Another disease, avian pox, is also taking a toll on the birds.

Meanwhile, ʻŌhiʻa trees—which Richards calls “the backbone of all of Hawaii’s forest ecosystems”—are dying off in droves from fungal infections. 'I'iwi not only nest in the trees, but use their long, curled bills to sip nectar from the blossoms, a staple of their diet. The fungal disease, identified in 2015, is called Rapid ʻŌhiʻa Death, and that pretty much sums it up. It is spreading rapidly and now infects some 50,000 acres. In 2014, a 15,000-acre area of forest on the east side of the island lost more than half its ʻŌhiʻa trees to the disease, with a total loss in some stands. While the fungus is so far limited to the Big Island, that’s also where about 90 percent of the remaining 'I'iwi live. Aside from a few scattered individuals, the rest reside on Kaua‘i and Maui.

If that were the extent of their troubles, the birds could take refuge in the highlands above 5,000 feet, which today is the approximate upper limit for both the tree disease and mosquitoes. But as climate change has taken hold in Hawaii, the biggest temperature increases have been in those higher-elevation forests, allowing mosquitoes to move upward. In its explanation for the threatened listing, USFWS says conservative estimates indicate 'I'iwi will lose 60 to 90 percent of their disease-free range by the end of the century, possibly making the Big Island’s mountains the only safe haven. “As temperatures warm,” Richards says, “the birds will at some point simply run out of habitat.”

Experts say the most urgently needed action for 'I'iwi and other native forest birds in Hawaii is a major effort to wipe out mosquitoes, or at least rein them in. “There are no native mosquitoes in Hawaii, and they are not a significant part of any food webs,” says Eric VanderWerf, a conservation scientist and president of Honolulu-based Pacific Rim Conservation. “Their eradication would have a huge upside and no downside.”

Other efforts are underway to provide habitat for the birds. Richards says native birds are returning to previously cleared agricultural areas that volunteers have replanted with ʻŌhiʻa trees in the Hakalau Forest National Wildlife Refuge on the Big Island. But it’s unclear if those gains will hold up—USFWS has closed the refuge to the public after detecting Rapid ʻŌhiʻa Death there. And the agency’s explanation for the threatened listing cites a study concluding that, under an optimistic scenario of future climate change, 96 percent of the 'I'iwi’s disease-free habitat in the Hakalau forest will disappear by the end of the century.

Restoring 'I'iwi populations will be a big challenge. No endangered Hawaiian forest bird has yet recovered enough to be delisted, “and the recovery of 'I'iwi, if it happens, will likely take a very long time,” says Paul Banko, a wildlife biologist with the U.S. Geological Survey who has studied the decline of honeycreepers and other native birds. Hawaii is no longer an island paradise for Scarlet Honeycreepers, but with new protections and a recovery plan in the works, there could still be sunnier days ahead.