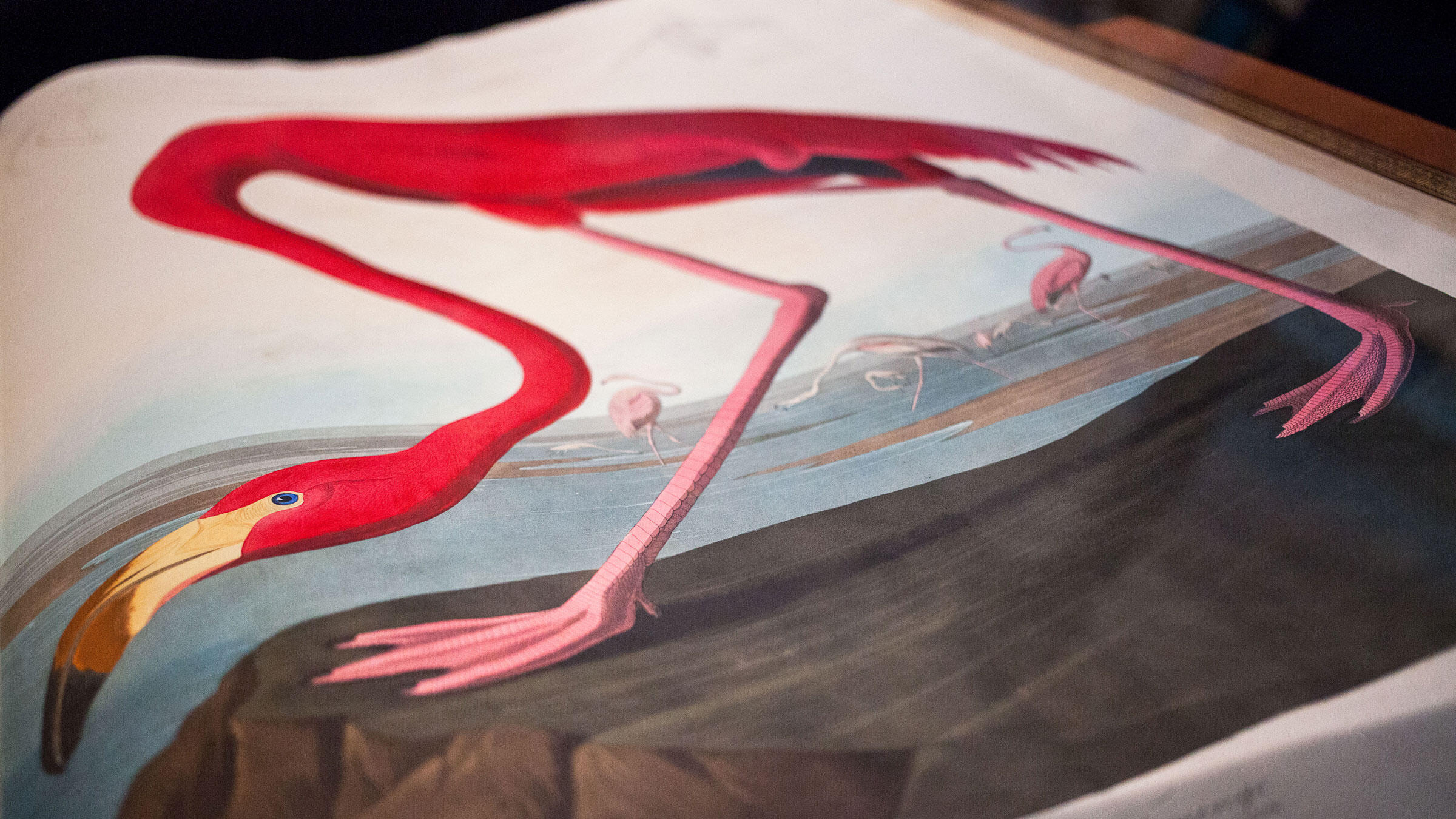 An illustration of an American Flamingo from John James Audubon's Birds of America, copies of which are today worth millions of dollars. Photo: Camilla Cerea/Audubon

The World's Most Expensive Bird Books

Got a million bucks to spend on pictures of birds? We have some options.

Earlier this year, when the online book marketplace AbeBooks released a list of the most expensive books it sold in 2015, topping the list was an 18th century Italian tome with a long-winded title: Storia naturale degli uccelli trattata con metodo e adornata di figure intagliate in rame e miniate al naturale. Ornithologia methodice digesta atque iconibus aeneis ad vivum illuminatis. Or, as it's known in English: A Natural History of Birds. The book, which was written by Saverio Manetti and illustrated by Violante Vanni and Lorenzo Lorenzi, sold for $191,000, setting a world record for the priciest online book sale. Spending nearly $200K on a book about birds (or anything, really) may strike some people as excessive, but as it turns out rare ornithological texts are consistently some of the most expensive books around. Here are a few of the priciest ones:

Often cited as “the most expensive book of all time,” there are still 120 known intact copies of John James Audubon’s The Birds of America (which was published between 1827 and 1838). While there are a handful of books in the world that may be worth more, until 2013 Birds of America held the record for the most money paid at auction for any single printed work: £7,321,250, or about $11.5 million. It is estimated that, when adjusted for inflation, five of the 10 most expensive books ever sold were copies of Birds of America. Only about a dozen are owned privately; the rest are in the hands of institutions, many of which display their copies for the public benefit, like the one at the Academy of Natural Sciences of Drexel University in Philadelphia. Birds of America is also very likely the world’s most expensive wall covering. In 1827, Lady Isabella Hertford cut up her copy of the mammoth 39.5” by 28.5” handmade book and used it to wallpaper her drawing room.

John Gould is sometimes known as “Britain’s Audubon,” but unlike his American counterpart Gould is infamous for not having actually written or illustrated a number of works that bore his name, instead leaving the latter task to more talented artists (including his wife, Elizabeth). Even so, a single folio credited to Gould can easily go for hundreds of thousands of dollars, and an “exceptional and pristine” 12-folio set of first editions of his bird books, published between 1831 and 1888, is currently for sale for $2,175,000 at Shapero Books in London.

One of the people who illustrated for Gould was Edward Lear.  Despite receiving no credit for his work in Gould’s books, Lear is renowned on his own merits.  His 1832 masterpiece Illustrations of the Family of Psittacidae, or Parrots, which he painted as a teenager, typically sells at auction—even in so-so condition—for well over $100,000. Fewer than a hundred copies are known to exist.

However, Lear’s work is beaten, price-wise, by a similar work from the other side of the English Channel. Pre-dating Lear by about 30 years, Francois Levaillant’s work Histoire naturelle des perroquets (1801-1805), or Natural History of Parrots, sold for $225,463 back in 2007.

Some Options for the Rest of Us

Reluctant to shell out a few years worth of college tuition for a single book? On the more reasonably-priced side of rare collectibles, an eagle-eyed investor can usually snag a copy of Ootheca wolleyana: an illustrated catalogue of the collection of birds' eggs formed by the late John Wolley (1864) at auction for around $2,000. For about half that amount (depending on condition), one could purchase The Ornithology of the Straits of Gibraltar (1875) by Lieut-Col. Leonard Howard Lloyd Irby.

And for those with a little less to spend, a pristine first-edition dust cover copy of the 1953 Ladybird classic Cocky the Lazy Rooster, written by Noel Barr and charmingly illustrated by Percy Bell Hickling, can usually be had for less than $50. It may never be worth $10 million, but you should probably refrain from using it to wallpaper your living room anyway.