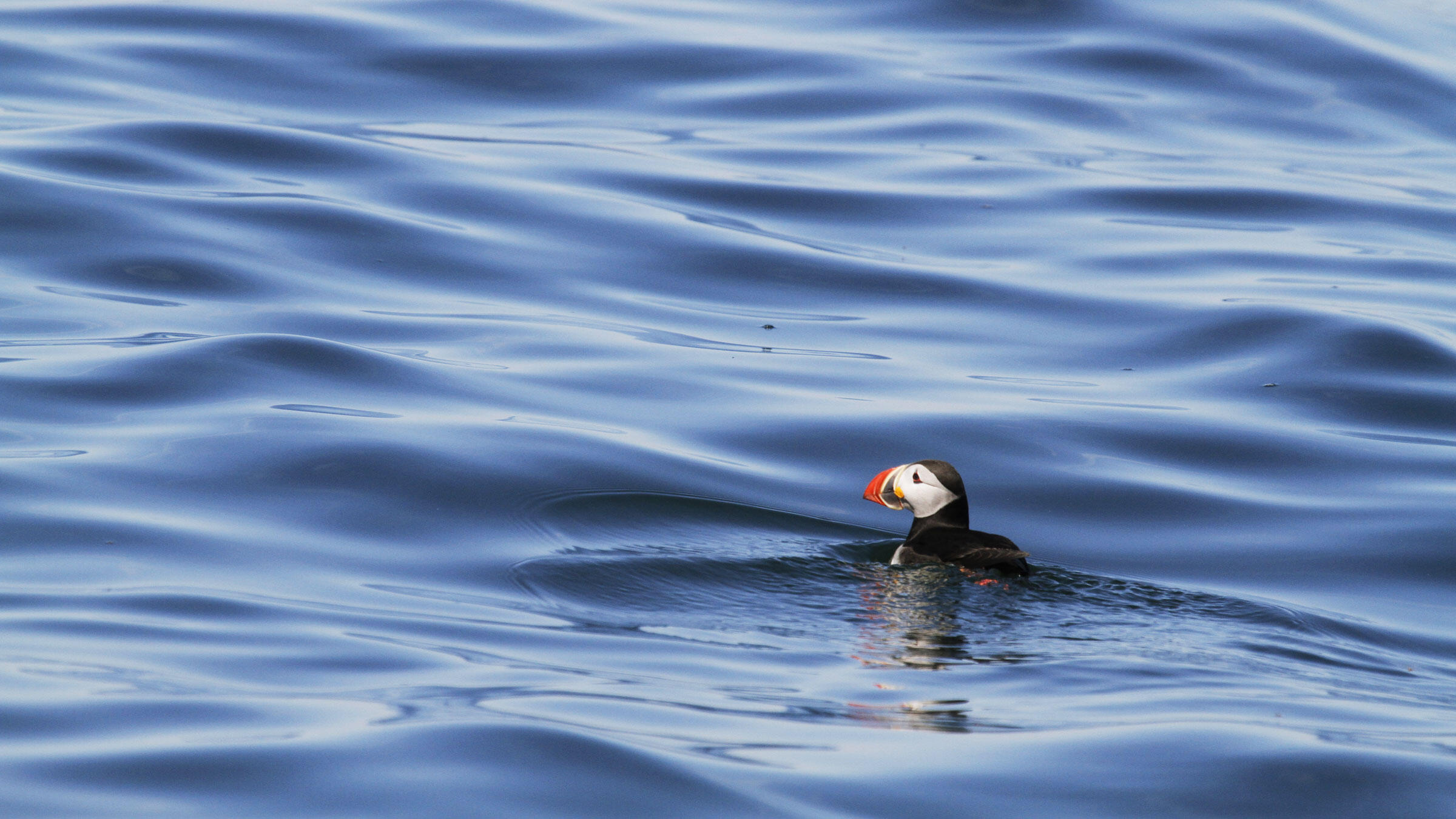 Adult Atlantic Puffins can spend up to eight months on the waves, never touching land as they sleep, eat, and drink out at sea. Photo: Stephen Kress

Steve Kress spent more than 40 summers off the rocky coast of Maine, uncovering every detail about Maine's breeding Atlantic Puffins and their ecology. But there was one mystery he just couldn’t get to the bottom of. “[The puffins] are only on land for about four months; most of the time they’re at sea,” says Kress, who is the founder of Project Puffin and was credited with bringing the birds back from the brink of extinction in Maine during the 1970s using unique conservation techniques. The fact that the birds were hiding out for more than half the year was baffling to him and his fellow scientists.

Now, after years of trying to trace the puffins’ trail, Kress and his team have finally tracked the birds to an offshore paradise on the U.S. Continental Shelf, southeast of Cape Cod, Massachusetts.

Geolocators lead to a startling discovery.

Back in 2009, Kress and other researchers at Audubon’s Seabird Restoration Program started hunting for clues to where their neighborhood puffins were swimming off to every August. They attached geolocators to birds from the colonies at Maine’s Seal Island National Wildlife Refuge and Matinicus Rock and tried to track them. After two failed rounds between 2009 and 2013—one due to concerns over faulty data, and the other because of a manufacturing glitch—researchers ran a third attempt over 2013 and 2014 that finally yielded some hard-won information about the birds’ winter retreat.

The data, gathered last spring from 19 puffins that returned to their burrows on the two islands, showed that the birds embark on an adventurous route that takes them to two main locations. They start by swimming north through the fish-rich waters of the Gulf of St. Lawrence, Kress explains, spending about a month in Canada before veering south to overwinter in waters about 200 miles off the coast of Cape Cod.

Their final destination is an epic, underwater landscape: home to New England’s famed “coral canyons,” which go deeper than the Grand Canyon, and huge submerged mountain ranges that stretch for hundreds of miles along the ocean floor. The biodiverse zone is populated with impressive swathes of cold-water coral, kelp forests, whales, dolphins, a plethora of fish species—and as we now know, Atlantic Puffins, which are probably benefiting from some quality foraging in the area. “The canyons must be supporting a food web that extends up through the water column to the surface,” says Tony Diamond, a wildlife ecology professor at the University of New Brunswick who is conducting similar research on the puffins of Machias Seal Island in the Gulf of Maine.

The discovery comes at the perfect time, too. In September of last year, scientists and conservationists began advocating for a Marine National Monument around the coral canyons and seamounts near Cape Cod. If approved, it would be the first marine monument in the U.S. side of the Atlantic, and would protect the region against potential future threats like dredging by fishing vessels, undersea mining, and oil drilling. “It comes back to this: We need to do as good a job as possible protecting the habitats where [puffins] both nest and winter,” says Kress. “They already have enough issues from climate and shifting food chains.”

Kress’s current research shows that warming seas in the Northeast are threatening the availability of forage fish for puffins, meaning there’s less food available for chicks during breeding season. That could be causing young to fledge before they’ve gained enough weight, reducing their chances of survival. By tracking more birds throughout the year, scientists can figure out where the parents are searching for food, and if those locations are shifting over time. This summer, the Seabird Restoration Program will be using GPS tags—which are more precise than geolocators—to study the birds’ foraging habits in greater depth.

As tagging technologies grow more sophisticated, a clearer picture of the puffins’ winter homeland will emerge—along with cues on how to protect them. “Given that this species spends most of its time at sea, we need to develop the tools to protect them at sea, as well on land,” Diamond says. “Even well-known birds, like puffins, are still revealing secrets about how and where they live,” adds Gary Langham, Audubon’s chief scientist.

Secrets are thrilling, but when it comes to conservation, finding the answers pays off in a big way.