Counting birds on a beach in the Bahamas sounds like a dream vacation. But tallying populations of small species—in this case, Piping Plovers—is more of a feat than a fiesta. Volunteers must stand in the tide under the hot afternoon sun for hours at a time, sand whipping at their faces. They slog through wet mud flats with scopes and heavy cameras, constantly straining their eyes to scan for the creatures, keeping score the entire time.

But for Audubon North Carolina scientist Walker Golder, this back-breaking work is one of the most compelling parts of his job. Earlier this year, Walker and four other shorebird enthusiasts from Audubon, the U.S. Fish and Wildlife Service, and Bahamas National Trust scouted the Bahamas’ Berry Islands and newly minted Joulter Cays National Park during the 2016 International Piping Plover Census. The hemisphere-wide survey occurs every five years, and is a big deal for the little bird, which landed on the endangered species list back in 1985. (The current global population estimate is around 8,000 individuals.) Scientists from the Americas man different patches of the Piping Plovers’ wintering grounds for two weeks, counting the birds and assessing the health of their neotropical habitat.

When Audubon and the Canadian Wildlife Service teamed up for the last census in 2011, it was the first time the Joulter Cays—a small chain of undeveloped islands—was recognized as an official survey site. In less than six hours, the group, which included Golder and Audubon's Matt Jeffery, counted 100 Piping Plovers in the 50,000 acres of the Cays' habitat. It was a discovery that electrified many plover enthusiasts. The following year the team returned with reinforcements from BNT and spent several days combing the islands and sand flats in search of the shorebirds. This time they struck gold—326 Piping Plovers were found to have settled into the Joulter Cays for the winter (nearly 9% of the global breeding population rests there and in the Berry Islands each year), along with more than a dozen other species of birds. The data was enough to get 92,000 acres designated as a national park.

Returning to the region is always exciting, and this year, Golder's team counted more individuals than ever—a total of 448 Piping Plovers between the Joulter Cays and Berry Islands. All together, 13 teams of researchers and conservation organizations in the Bahamas—comprised of U.S. scientists paired with local volunteers and students—tallied close to 1,400 plovers.

Marathon surveys like these can win protection for the plovers’ homes. Yet gathering the data requires a certain degree of toughness and diligence. In the Bahamas, life is unpredictable: Volunteers must always be prepared for bad weather, mechanical problems, and a general lack of cooperation from the birds. But as you'll see in the photos below, both the experience and the end results eclipse these challenges. Drift through the slideshow to discover how Golder and his crew ran this crucial census and gathered a better understanding of the life and future of the Piping Plover. 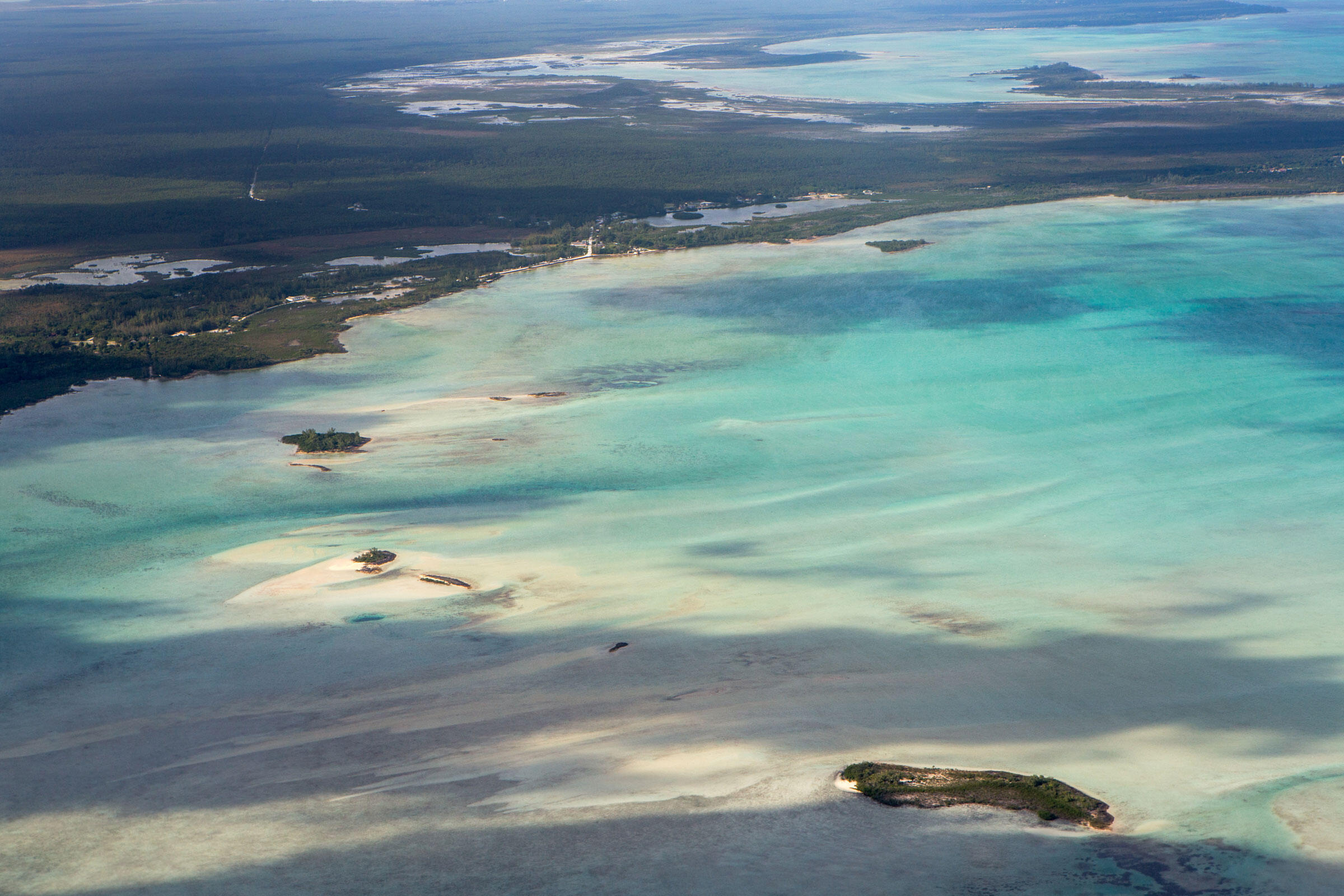 The census site: The island of Andros is the closest slice of civilization to the Joulter Cays. The community depends heavily on fishing for trade, but in recent years, has expanded its focus to ecotourism. Audubon and BNT are working with the residents of Andros to train guides and rangers for Joulter Cays National Park. Photo: Camilla Cerea/Audubon 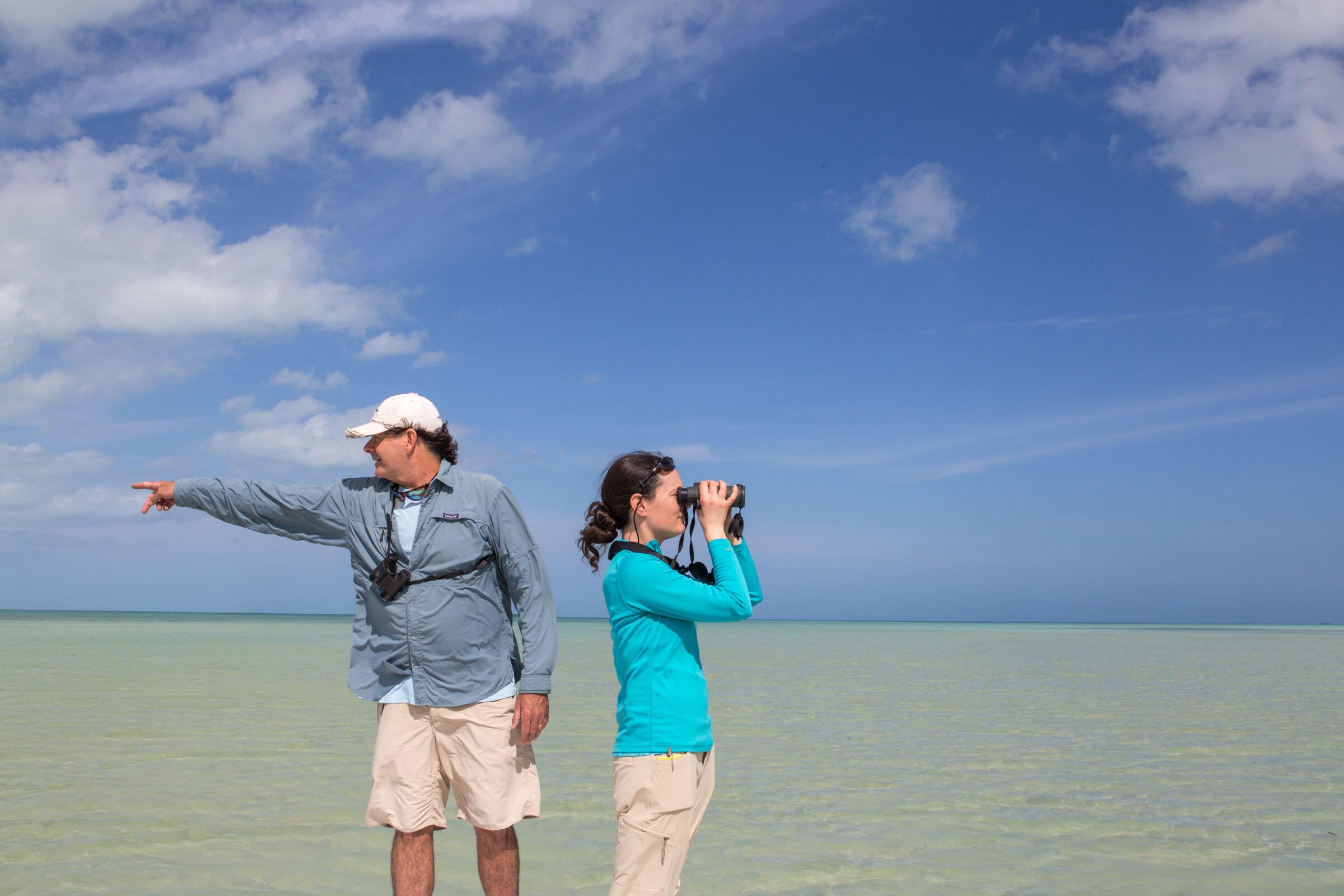 It takes two: Most of the census involves waiting on high alert—and Walker Golder and Pam Loring were never not at attention. Though the census focuses on Piping Plovers, scientists also submit their data for Wilson’s and Snowy Plovers. The team also kept track of all sorts of shorebird and waterbirds species, including a solitary American Flamingo. Photo: Camilla Cerea/Audubon 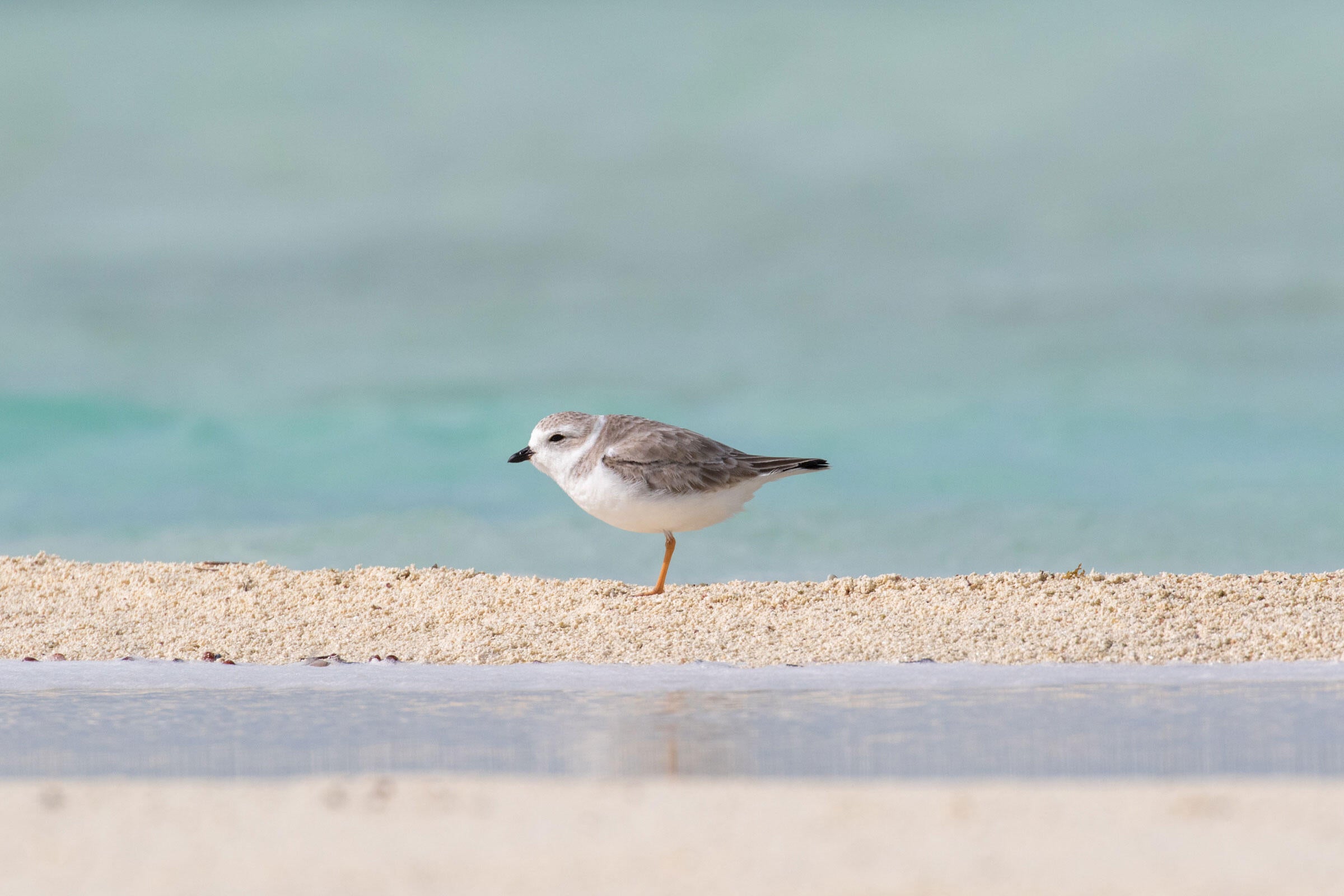 Target species: Piping Plovers have just as much reason to love the Bahamas as tourists: On the island they get ample food and accommodations, and natural predators are sparse. But the threats are still plenty, with climate change, invasive species, development, and overfishing infringing on their roosting habitats. Side note: This bird isn’t missing a leg—plovers often stand on one stem to keep from losing too much heat on the beach. It’s a very good way to punk humans. Photo: Camilla Cerea/Audubon 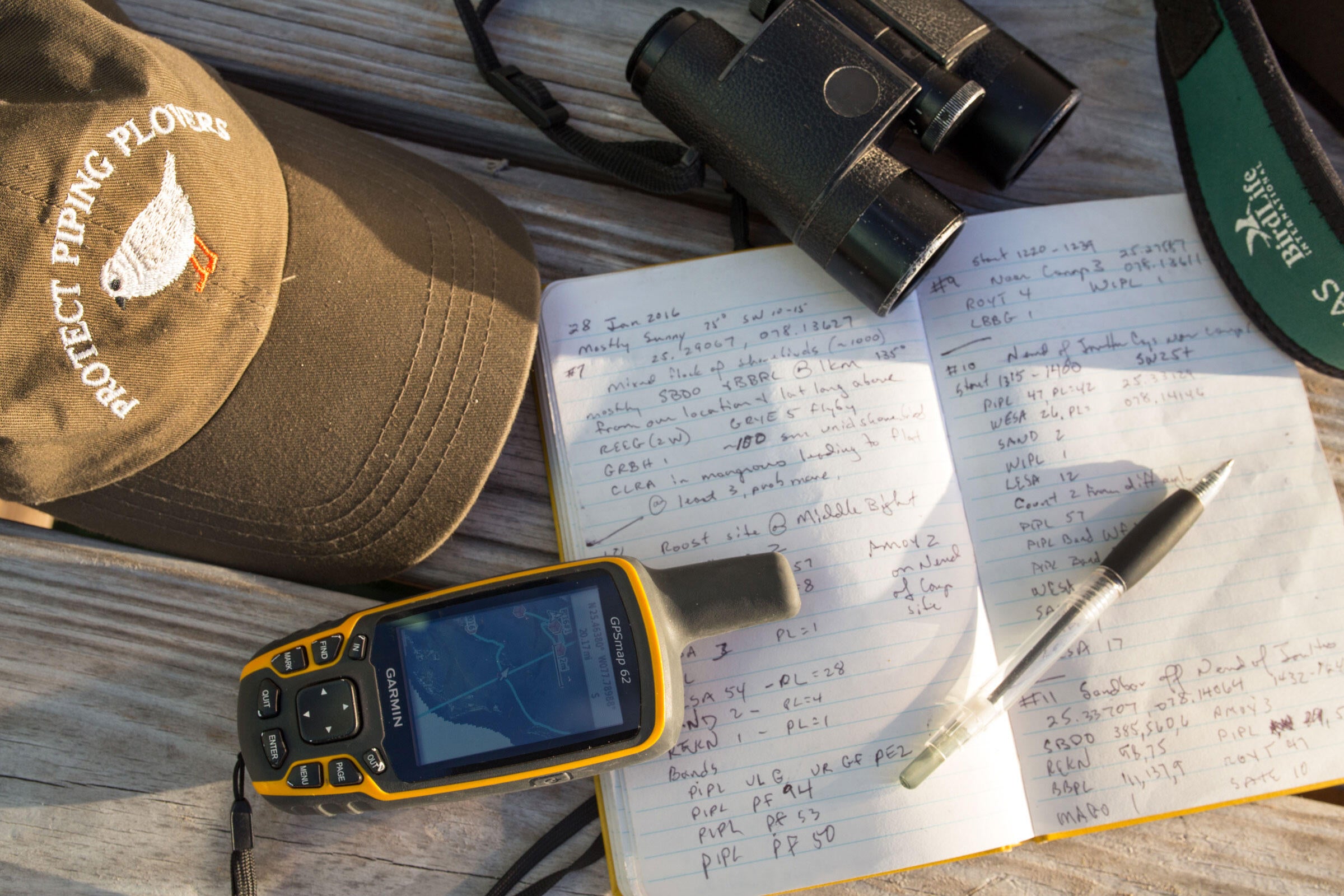 Census tools:The team plans their route and stops based on GPS coordinates from prior successful surveys. Hats (plover-themed please!) and binoculars are must-haves, too. Photo: Camilla Cerea/Audubon 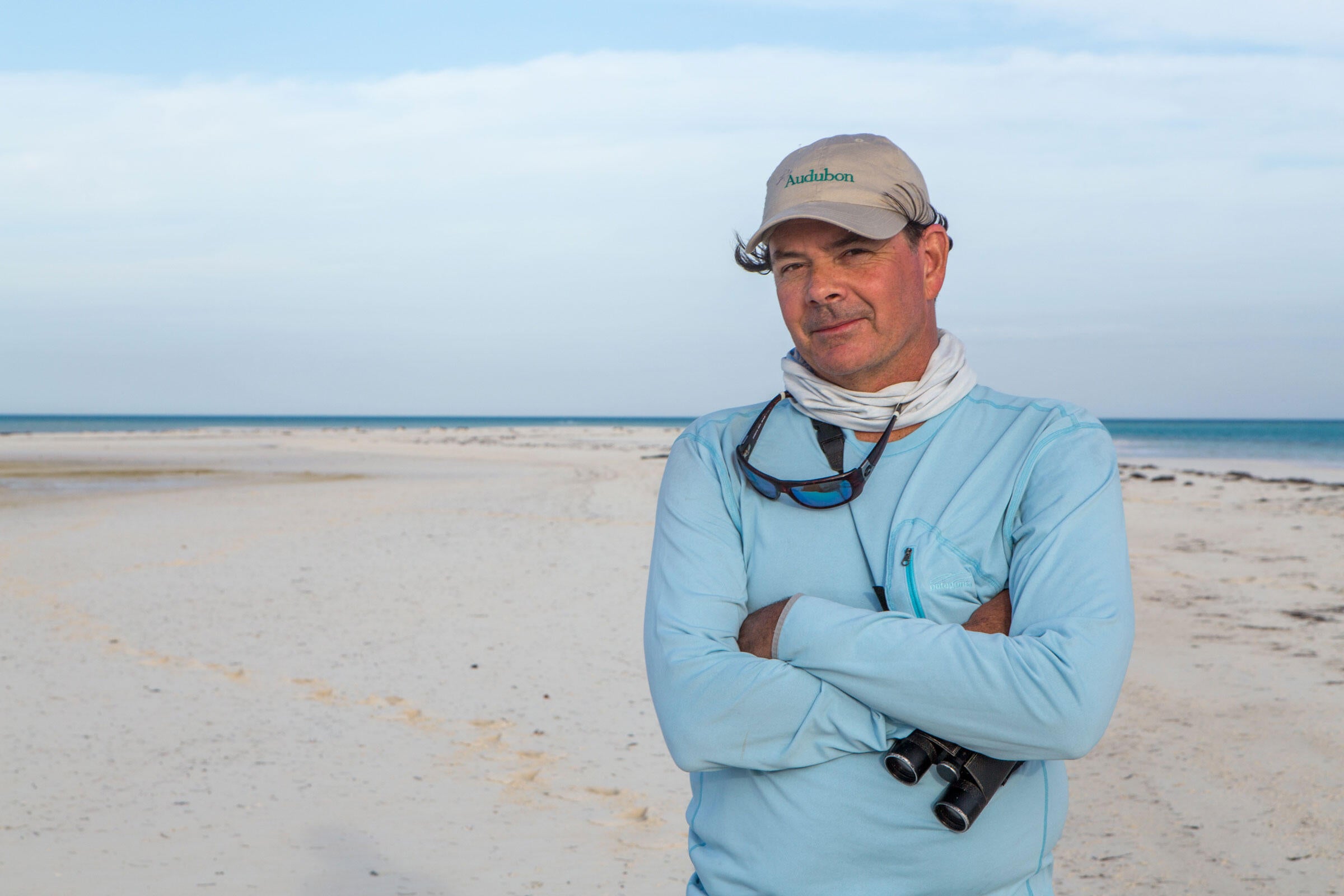 Team captain: Golder was one of the first to sign up for the census when it launched in 1991. These days he visits the Bahamas at least four times a year to band plovers and lead smaller surveys. He catches the birds using a harmless trap, and gathers data on their location, sex, age, and fitness. For non-captures he simply marks down the place and tag number. Photo: Camilla Cerea/Audubon 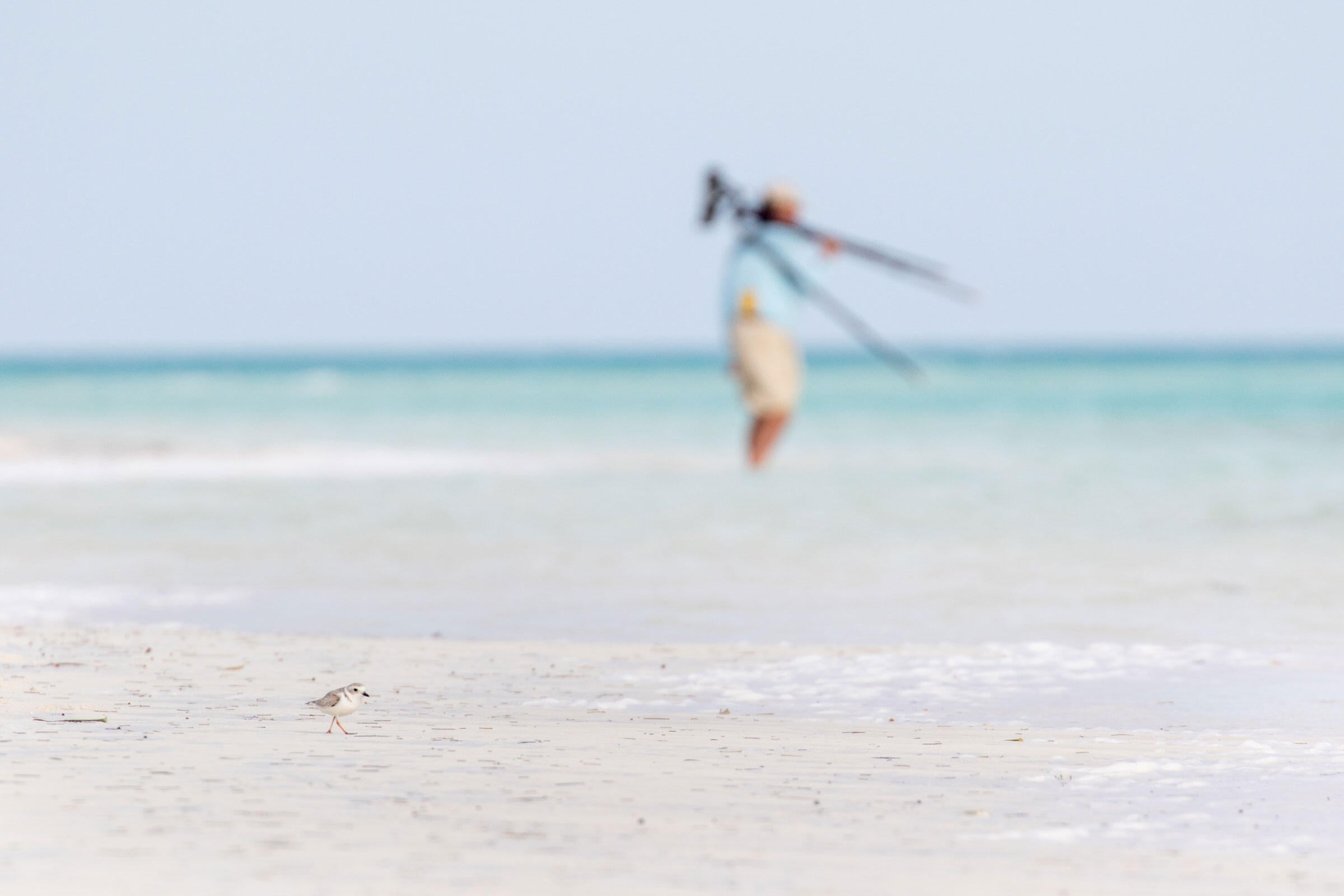 Spotting birds: Golder and his spotting scope were practically inseparable during the count. Binoculars can be used during shorebird surveys, but scopes, with their powerful magnification, are even better at spotting the seven-inch-tall birds. Photo: Camilla Cerea/Audubon 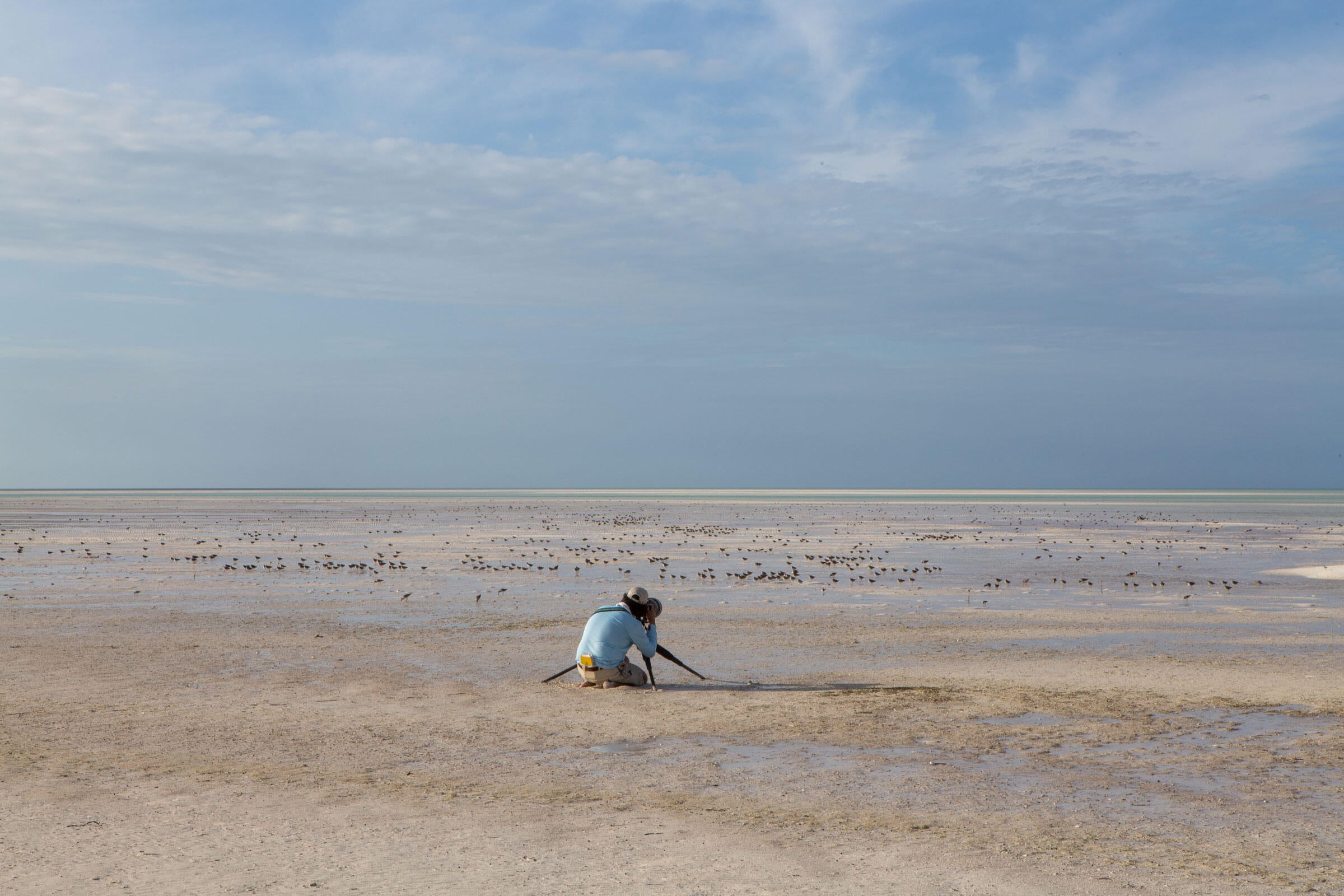 Tag check: Some Piping Plovers sport colorful markers on their legs, which are used to trace the birds’ migration routes. Each tag has a unique code, specific to where the plover was first caught. Since Golder is a pro at shorebird photography, he used his shots to suss out the tiny numbers. During the census, he found birds from North Carolina, New Jersey, Rhode Island, Massachusetts, New York, the Great Lakes, and even Canada—all wintering in the Bahamas. Photo: Camilla Cerea/Audubon 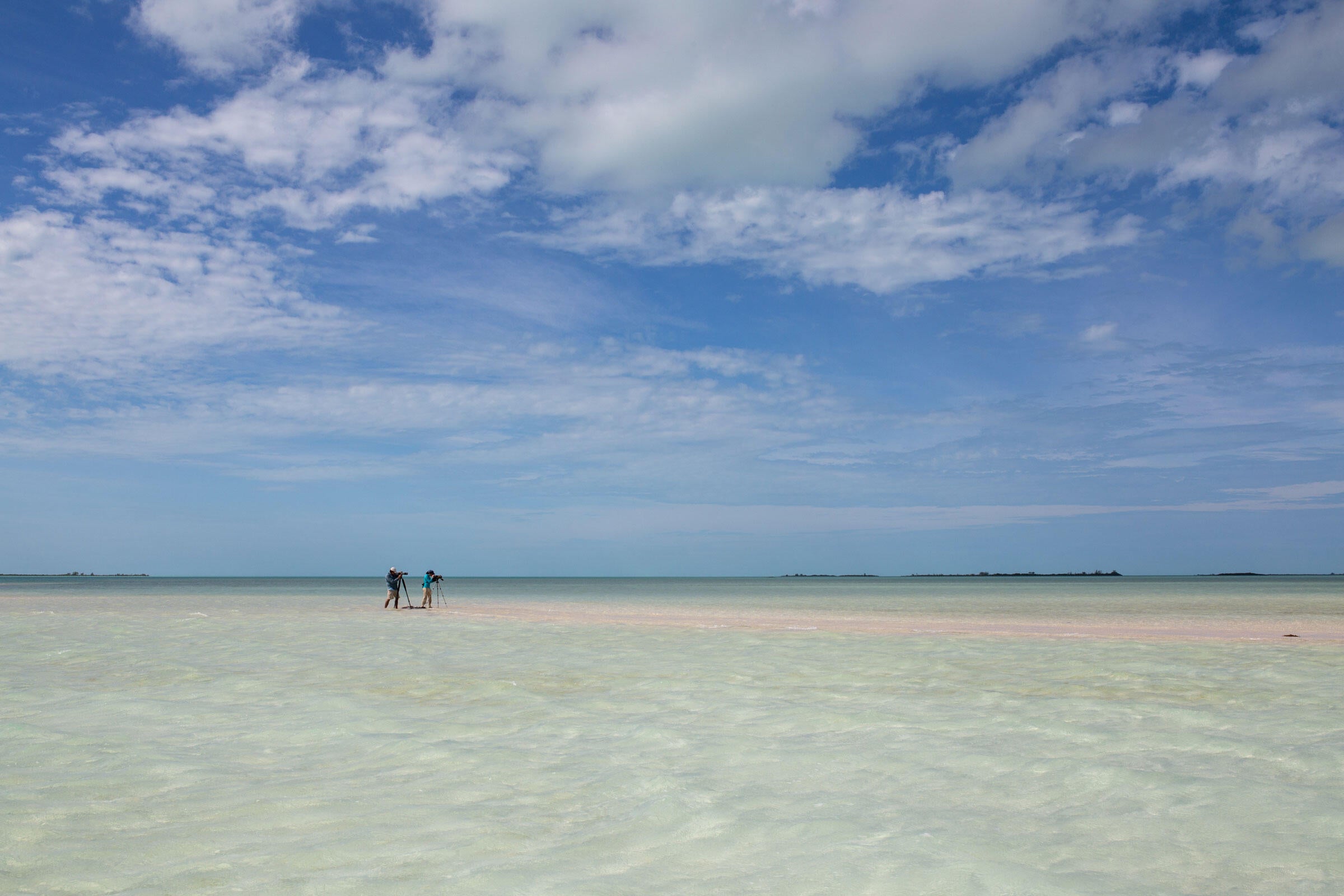 Lunch time: The scientists check out the intertidal area of the beach. Exposed mud flats are an important part of the plovers’ foraging habitat. The birds use their legs to stir up the substrate, forcing the insects to come straight to the top. From a distance it looks like the birds are doing a sort of Irish step dance. Photo: Camilla Cerea/Audubon 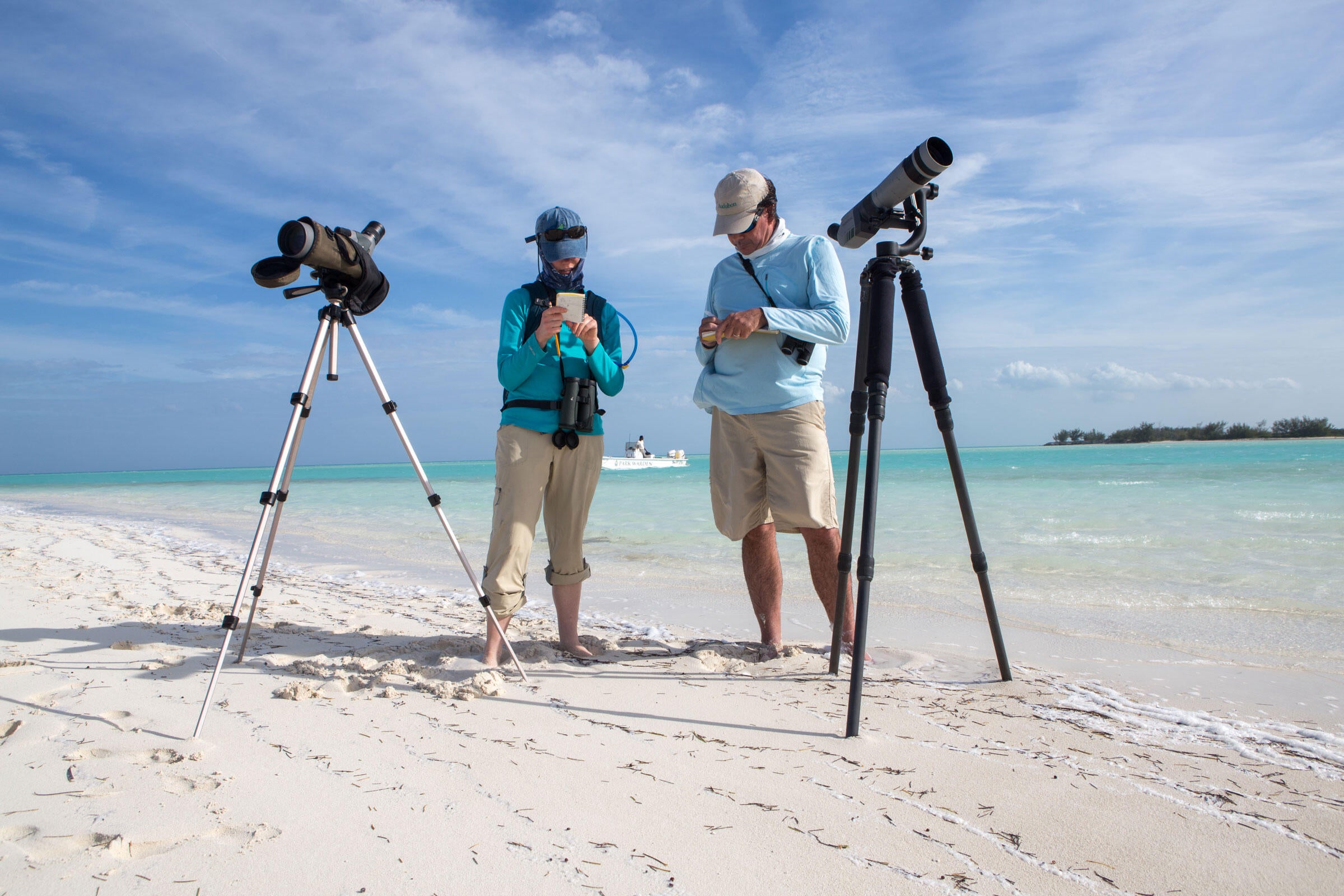 Grand total: Once the birds are spotted, everyone posts up and counts, with each participant identifying and tallying the birds twice. Then the entire group compares results to reach consensus on numbers. Photo: Camilla Cerea/Audubon 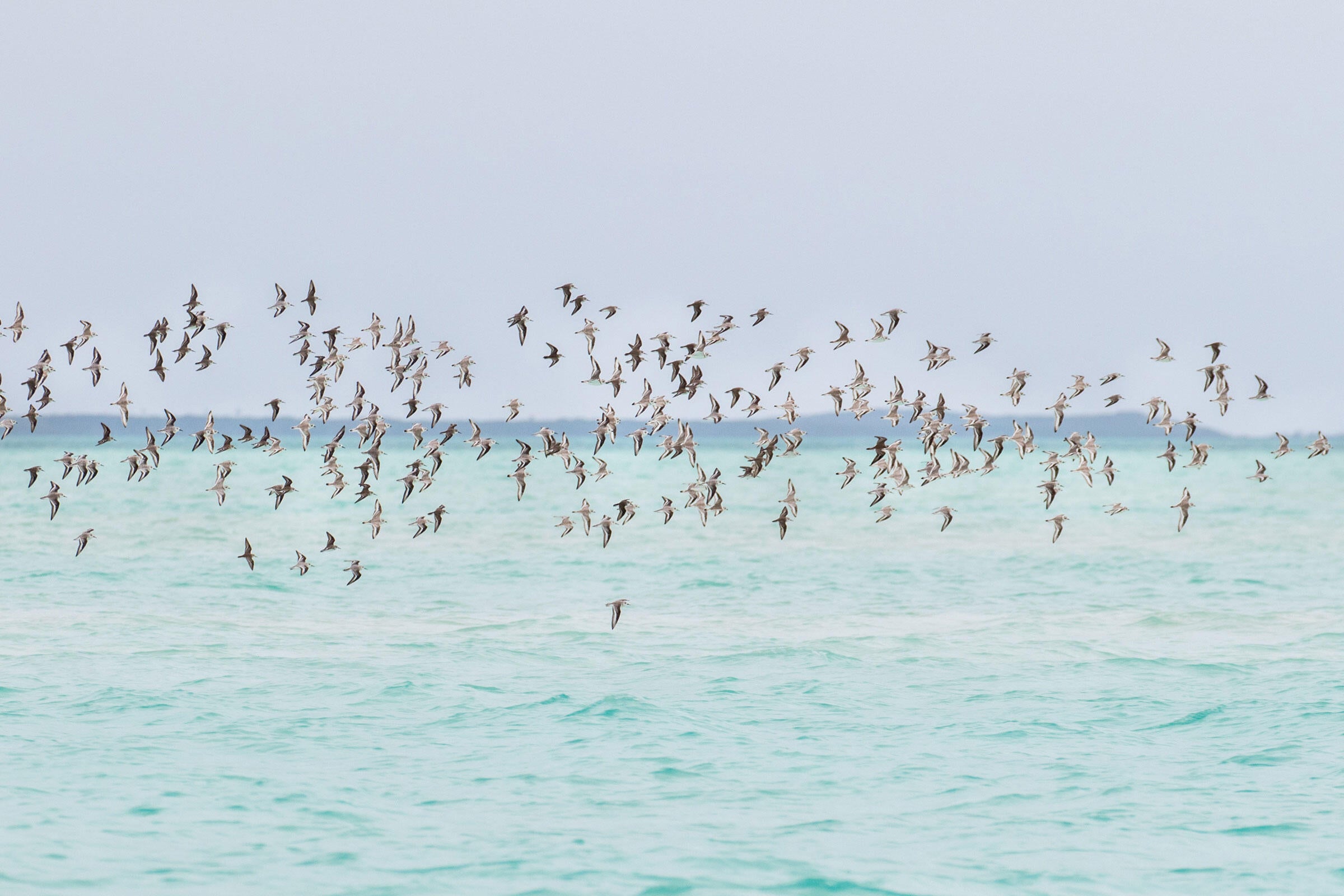 Jackpot: The team started out averaging around 50 plovers a day, but on the fifth day of the survey, they struck gold: 211 Piping Plovers all on one of the Berry Islands. They tallied the entire flock before it flew off with a handful of doppelganger Sanderlings and Wilson’s Plovers. Photo: Camilla Cerea/Audubon 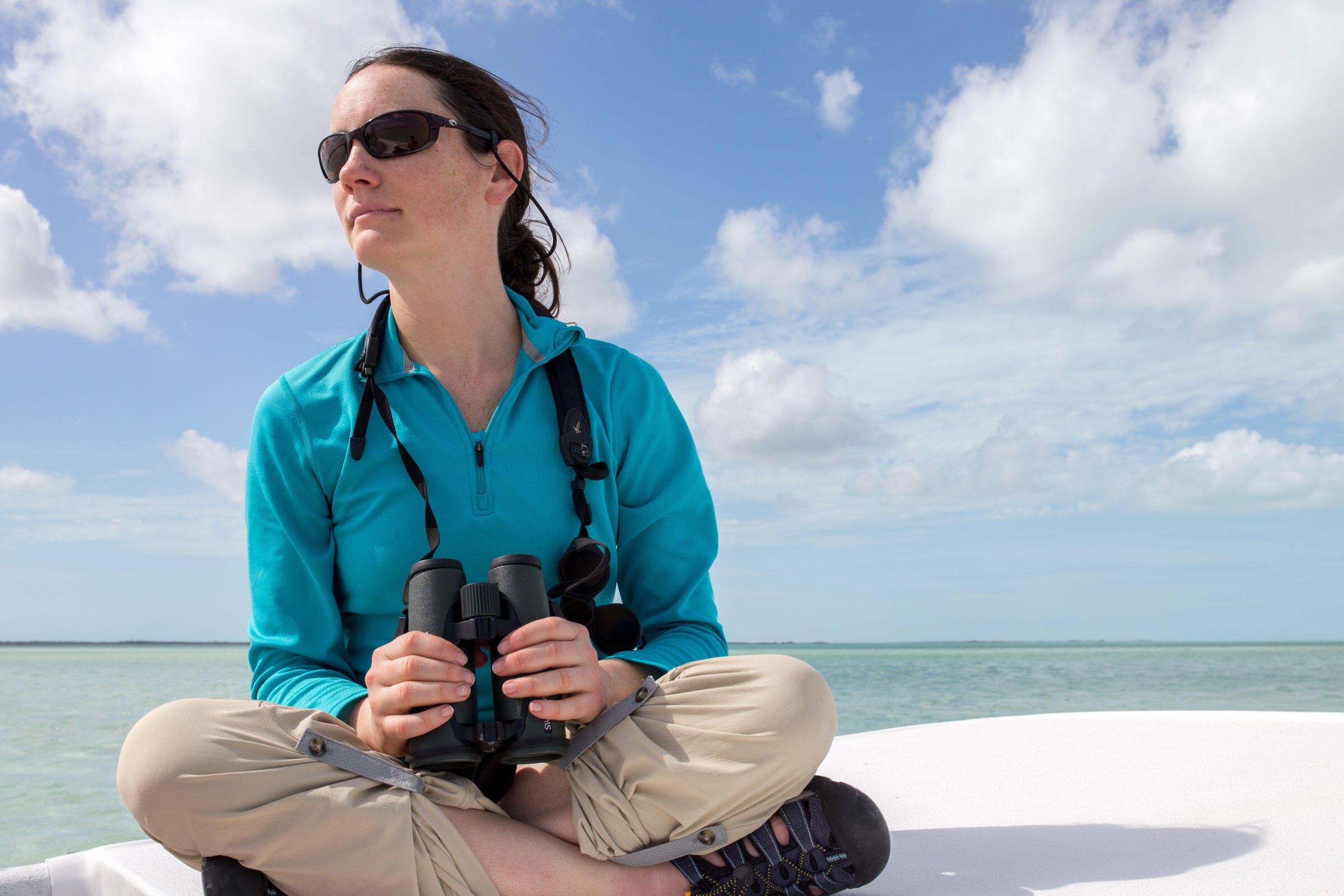 Expert opinion: This was Loring’s first plover census, but she has a rich history with coastal species. As a PhD student at the University of Massachusetts, she conducted research to understand the flight patterns of Common Terns, Roseate Terns, and Piping Plovers so that offshore wind farms can be sited without harming the birds. Photo: Camilla Cerea/Audubon 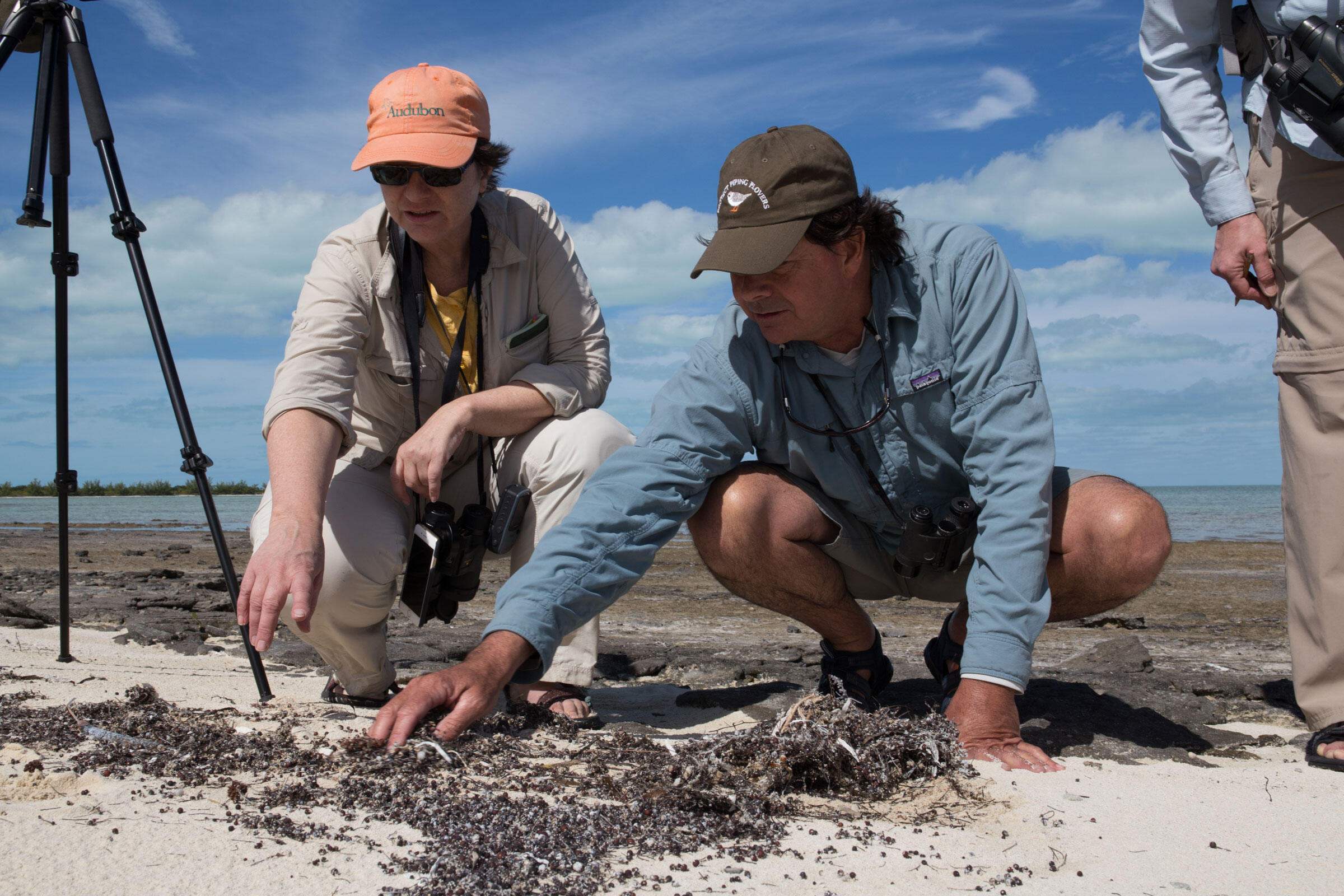 Spot no. 2: After nearly a week at the Joulter Cays, the crew moved over to the Berry Islands. This untouched region of the Bahamas is a haven for shorebirds—and Golder wants to keep it that way. He's hoping that the census results, paired with smaller seasonal surveys, will convince the country's government to turn the islands into a new protected area. Photo: Camilla Cerea/Audubon 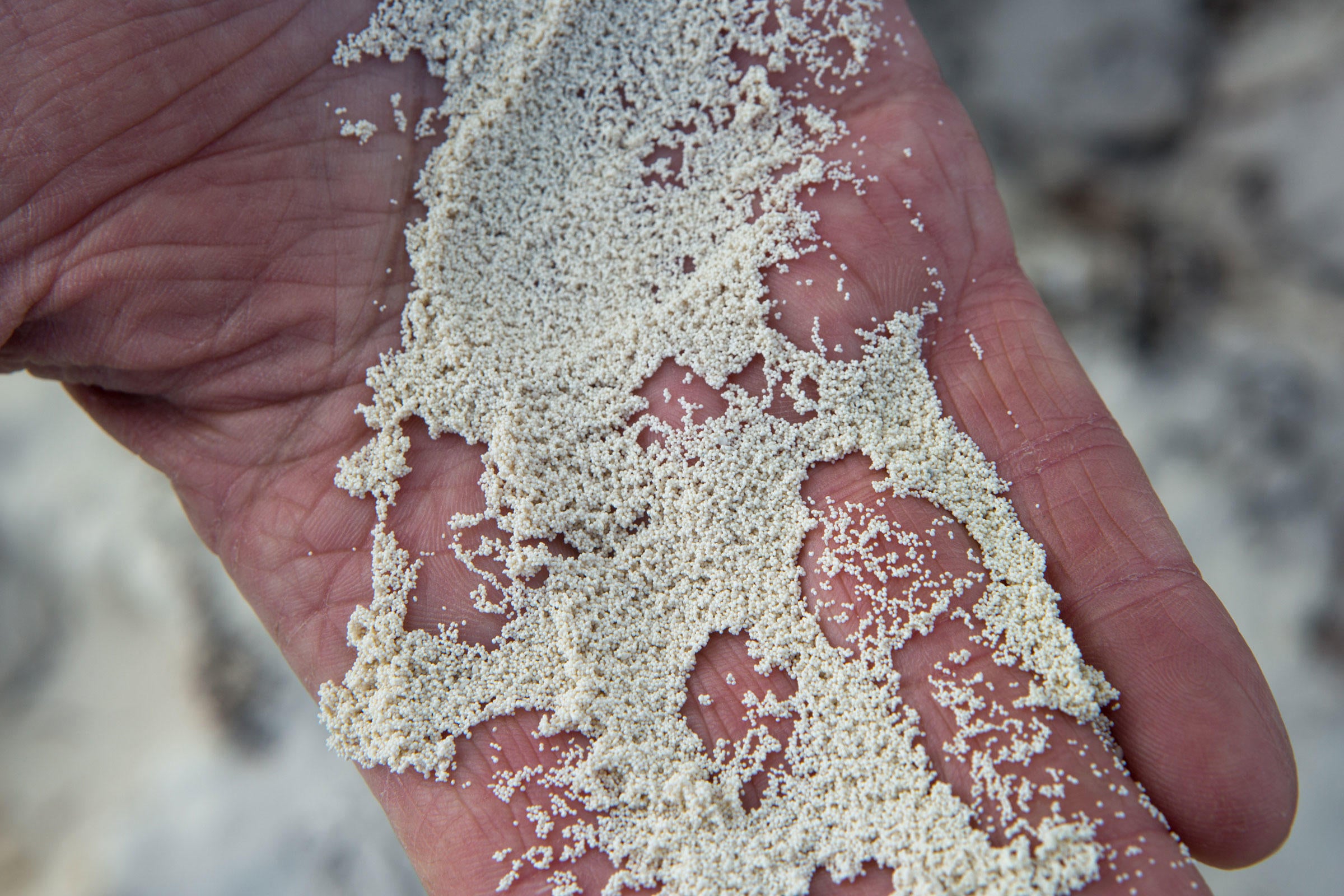 Under the sand: Oolite, the special sand that is unique to the Berry Islands and Joulter Cays, has smooth, orb-like grains that play host to all sorts of worms and other spineless critters—perfect Piping Plover snacks. But the grains are also in high demand by the technological industry, making the region susceptible to sand harvesting and other degradation. Photo: Camilla Cerea/Audubon More to come: Surveys can be tedious, but they yield great results. By gathering information on birds and their habitats, scientists can provide governments with surefire reasons for preserving natural areas—that’s how Joulter Cays gained its recent national park status. As one census ends, another (unofficial) one begins: Golder plans to be back in the Bahamas by May. Photo: Camilla Cerea/Audubon

Ever seen a bird wearing an ankle bracelet? That’s no ordinary piece of bling: It’s a feather-light plastic or metal band that scientists use to track species of interest. By tagging an individual (here's a video of the process) and following it back and forth during migration, scientists and conservationists can collect crucial data about its life history. Take Piping Plovers for example. With the International Piping Plover Census only happening every five years, bands can provide more frequent data on the birds’ breeding and nesting sites, stopover areas, and habitat use. By outfitting the birds with the color-coded, brightly numbered, flag-shaped tags (they attach quite comfortably to the plovers' legs), scientists can tell individuals apart.

The flags are easy to spot for a reason: Researchers regularly ask beachgoers and citizen scientists to keep an eye out for banded birds and report their sightings. Just recently, Matt Jeffery heard that two Piping Plovers were photographed on the tiny island of Bonaire—the farthest south this species has ever been documented. While a pair of plovers in the Caribbean may not seem groundbreaking, it offers unique insight on just how far these tiny birds are willing to travel for the right habitat. Ultimately, the more eyes looking out for these beach bums, the more data available to aid coastal conservation.

These three banded Piping Plovers—all spotted during the latest census—have richly detailed biographies, thanks to repeated sightings. Let’s take a look at where they’ve been and what makes their stories so special.

Hailing from Rhode Island's East Matunuck State Beach, this lady in green is particularly special for USFWS ornithologist Pam Loring. She was banded by Loring last May, and has been spotted several times since then, along with a few new plover chicks by her side. But the best resighting came in January when Loring found YC6 during the Bahamas census. "It was a windy morning, and I just pointed my scope in a random direction and waited," she says. "Within about five minutes [the plover] flew in and landed in view. It was a really fortunate moment; it's amazing to think of how far she traveled to get there."