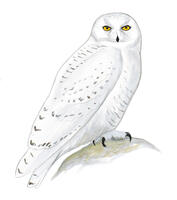 As a long-time owl researcher, and a co-founder of Project SNOWstorm (a large, collaborative study of the winter ecology of Snowy Owls), I'm often asked whether it's a good idea to feed wild owls—and especially whether using bait to lure them in for photographs is okay. After all, researchers like me use lures to trap owls for banding and tagging.

I believe the answer to both questions, though, is an emphatic no.

With Snowy Owls in particular, the urge to feed them may come from a genuine desire to help. There is a persistent myth that Snowy Owls found down here, far south of the Arctic, are starving—an idea that refuses to disappear, even though it's been refuted by years of research. (Big irruptions, which happen every three to five years, are generally the result of a productive breeding season in the Arctic, and we and other researchers have found that most irrupting Snowy Owls are actually quite plump.)

A bigger issue than this altruistic but misguided impulse is the use of live mice, or even fake lures like cat toys, to bait in owls for better photos. In some cases, the practice has been so blatant and pervasive that authorities have considered outright bans on baiting owls, as the Minnesota legislature did in 2014. Many prominent photographers and wildlife-photography organizations frown on the practice, and many magazine editors and photo contests (Audubon's among them) now prohibit photos of baited owls.

Why is baiting a bad idea?

The owls don't need the food. These birds are accustomed to hunting for their own food, and in the vast majority of cases are in perfectly good health. True, you rarely see Snowy Owls hunting in daytime, but that's not because they are sick or unable to hunt. Like most owls, they just prefer to hunt at night.

If you suspect that an owl is injured or unwell, a handout probably won't help the situation. Instead, you should contact a licensed wildlife-rehabilitation center or wildlife agency. An expert can then assess whether the owl needs help and, if so, is trained to offer it.

It poses a big risk to the owls. While there is some concern that pet-store mice may pass pathogens or parasites to wild owls, the biggest reason not to feed wild owls is how quickly they can become habituated to humans.

Many northern species of owls have little natural fear of people to begin with, and feeding them can quickly cause them to associate humans and food. This can bring them dangerously close to people who may harm them, especially when they leave their wintering grounds and begin migrating back north.

It can also lure them to locations like busy roadsides where there’s a risk of collision with vehicles—another danger with which owls have no experience.  Project SNOWstorm's team of wildlife veterinarians and pathologists found that, of the Snowy Owls they examined, a third of all trauma deaths were known to have been caused by vehicle collisions, and vehicles were the suspected cause for many more. And regardless of species, most of the owls brought to wildlife rehabilitators have suffered vehicle-collision injuries.

Writer and researcher Scott Weidensaul is the author of more than two dozen books on natural history. He co-directs Project SNOWstorm and has studied northern saw-whet owls for 20 years.