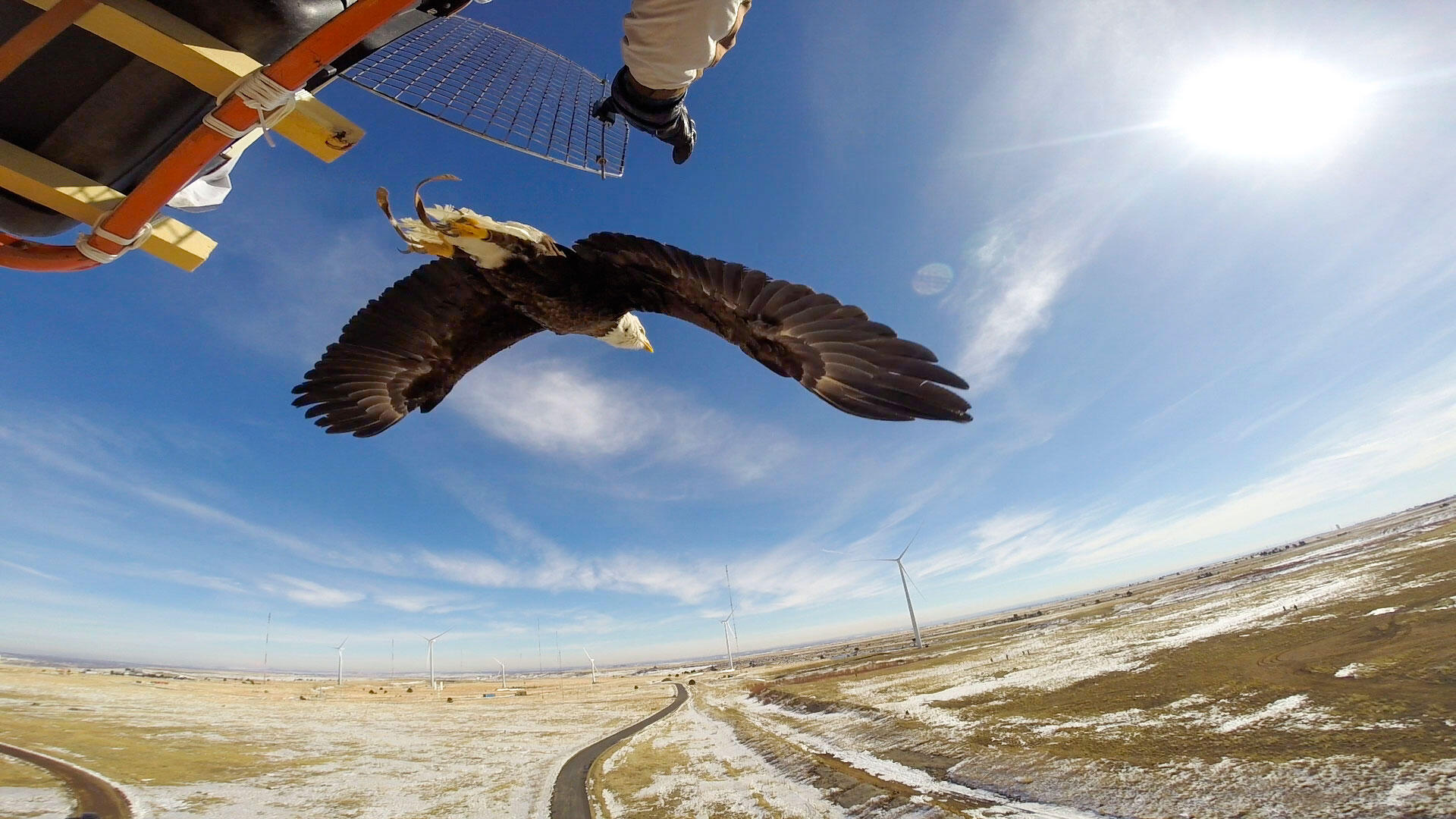 As part of research conducted by Auburn University, trainers and a veterinarian are trying to develop radar and visual systems to help stop birds from striking wind turbines. In one experiment, researcher Jason Roadman and veterinarian Seth Oster release a Bald Eagle from a lift to track how it flies toward turbines. The work is being done with U.S. Department of Energy's National Renewable Energy Lab (NREL). Photo: Dennis Schroeder and John de la Rosa/NREL/Flickr CC (BY-NC-ND 2.0)

Thank you for your interest in how wind power affects birds. To learn more about Audubon's position on wind power, visit here. And for a more recent review of technological advances in the field, read this story.

In 2010 David Newstead, a U.S. Fish and Wildlife Service field biologist, visited the Gulf shoreline of Laguna Madre, Texas, to survey skimmers, terns, and egrets. But it was a flock of 15 American White Pelicans that caught his eye, flying toward the nearby Peñascal wind farm. As he watched, a pelican at the flock’s tail end was swiped by a massive turbine blade and “literally ‘erased’ from the air,” Newstead wrote afterwards. This in itself isn’t surprising—wind turbines are notorious bird killers—but this specific farm was supposedly equipped with radar that could detect approaching birds and halt the blades. The radar had failed to do its job.

Wind turbines kill an estimated 140,000 to 328,000 birds each year in North America, making it the most threatening form of green energy. And yet, it’s also one of the most rapidly expanding energy industries: more than 49,000 individual wind turbines now exist across 39 states.

The wind industry has the incentive to stop the slaughter: Thanks to the Migratory Bird Treaty Act, it’s illegal to kill any bird protected by the Act—even if the death is "incidental," meaning it occurs unintentionally on the part of the wind farm. The Bald and Golden Eagle Protection Act recommends that to avoid eagle deaths, specifically, companies seriously consider where they site their wind developments, and that they also limit turbines’ impact using techniques like radar to detect incoming birds. But as the accident at the Peñascal wind farm shows, it’s unclear if deterrents like these actually work.

The Ways Wind Farms Try to Scare Birds Away

There are many kinds of retrofits that people are testing to hopefully make wind turbines better for birds. Here are some of the options.

Cameras, Radar, and GPS: The most advanced and widespread technologies are those that use radar and GPS to detect incoming flocks and turn off the turbines in time for the birds to fly through. In 2006, company Babcock and Brown was the first to install such a system at the Gulf Wind Project in Texas (now owned by Pattern Energy). At other sites, these technologies are species-specific: In California’s Tehachapi Mountains, wind developer Terra-Gen has tailored its bird detection systems to protect the California Condor, North America’s largest and most threatened bird species (only about 230 survive in the wild). Since most condors are tagged with GPS sensors, the wind farm sets up a system that shuts down the turbines when a condor is within two miles of the wind farm—all in less than two minutes. 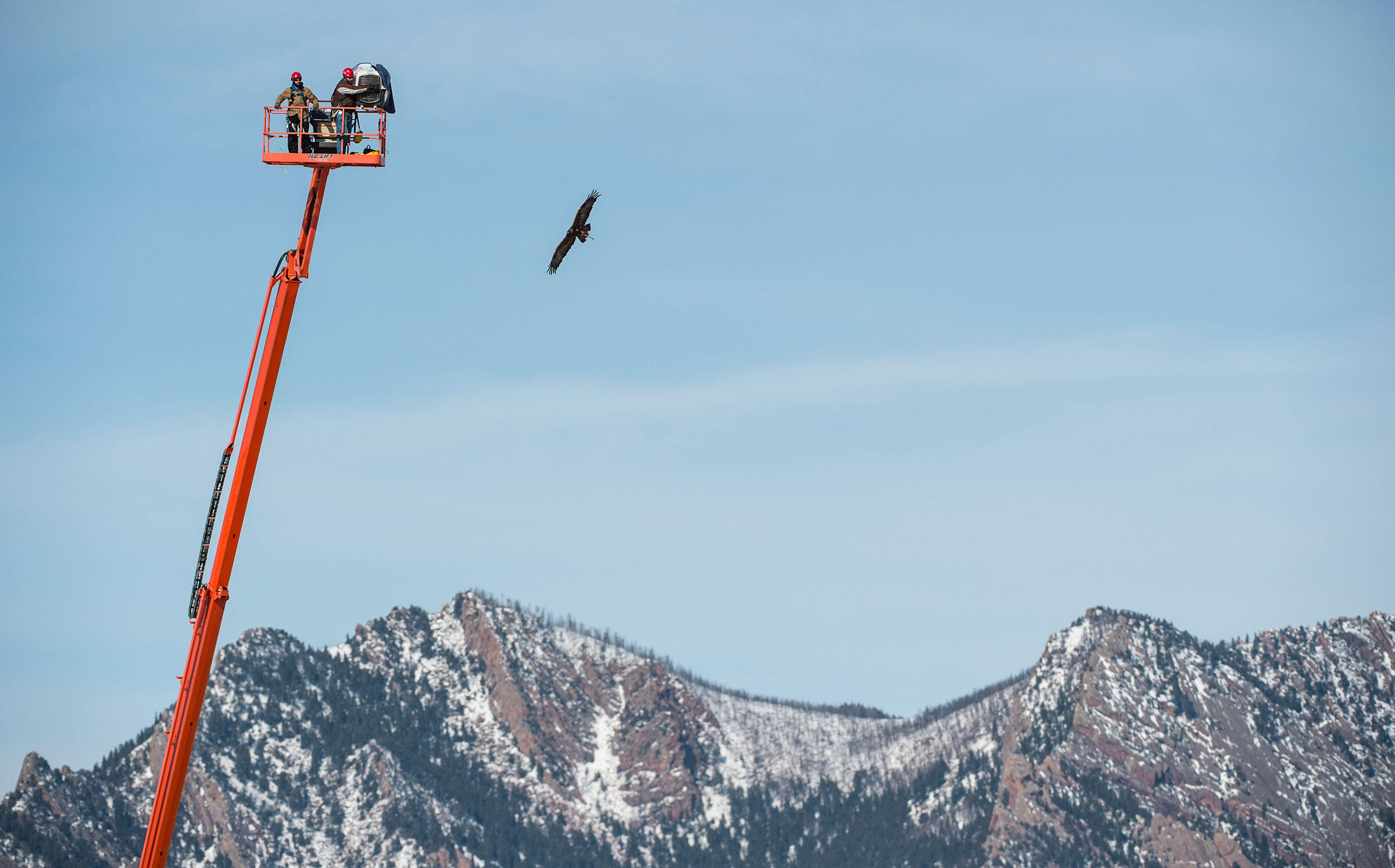 Bright Blades: A 2010 study suggested that purple wind turbines would in theory cause fewer bird strikes than the typical white ones. That’s because white blades attract insects, and insects attract foraging birds. So, cutting down on the insects could dissuade foraging avians from coming too close.

Bright Lights: Lighting systems are also being investigated as a deterrent tool: In 2012 the National Science Foundation awarded a $150,000 grant to researchers who showed that UV lighting could be used to deter bats and birds from wind farm sites. Right now, their patent is pending.

Turbines That Look Like Trees: As an alternative to the designs we have today, inventors are increasingly looking to vertical axis turbines, whose "blades" circulate around a central spire, allowing plenty of them to be packed into a space together. This allows inventors to try out all kinds of artful designs (which could make them less of an eyesore on the landscape)—and, it’s also thought that these vertical shapes might be less detrimental to birds.

Smart Blades: Renewables company Laufer Wind has partnered with the government to see if better understanding of how birds fly might help them design improved blades trained to recognize approaching birds. To that end, they’ve been studying the flight of a domesticated falcon, a bird called "Houdini." The bird is fitted with a GPS chip that records his motions as he soars, yielding data that will create a precise algorithm of Houdini’s flight. Recently, the team has expanded the research to include eagles—one Golden and one Bald. These two trained raptors, named "Spirit" and "Nova," are providing GPS-tagged flight information, just like Houdini. Armed with better information on how birds fly, the researchers would create a radar system more capable of picking birds out of the landscape, and shutting down in time for them to safely pass, explains Jason Roadman, the project’s NREL field test engineer. Additionally, the researchers are testing out a camera system that can spot birds up to 0.62 miles away, which would prompt a turbine shutdown.

Too Good To Be True?

But do any of these methods actually mean fewer birds die? Unfortunately, proof is scant. “I would say it’s highly experimental; none of it has been proven to work,” says Garry George, renewable energy director at Audubon California. In the case of the obliterated pelican, the wind farm operators said their radar was built to detect large incoming flocks, not individual birds (federal law enforcement officials visited the scene, but there’s no public information on whether the farm was charged for the bird’s death). Other radars—even state-of-the-art facilities such as the White Pine County Wind Farm in Nevada, where two Golden Eagles died in three years—have bad track records.

And the plot to train blades to recognize bird flight is equally flawed, says Lisa Linowes, the founder of prominent wind industry watchdog WindAction. “I think it’s yet another opportunity for money to be spent [on something] that’s already been tried,” she says. Besides, even if it does work, every species of bird approaches a turbine in a different manner, so training blades to recognize all birds could take years of research—something the NREL and Laufer Wind researchers acknowledge too.

Plus, it can take people 45 minutes to shut down turbines after birds have been detected, Linowes says—plenty of time for birds to reach them, and get hit. Some retrofits, like the condor avoidance scheme, factor this issue into the design—but many do not.

There is one easy way wind companies can avoid bird deaths: Put wind farms in places where birds are unlikely to fly in the first place. “Right now one of our big considerations is siting,” says Christy Johnson-Hughes, a biologist from the USFWS’s ecological services. Migration pathways and certain landscape features—such as wetlands and migratory stopover points—are known areas where birds gather. “Putting turbines in those exact places is probably risky,” says Brian Millsap, USFWS national raptor coordinator. “Siting is the one and only thing that we really understand at this point.” 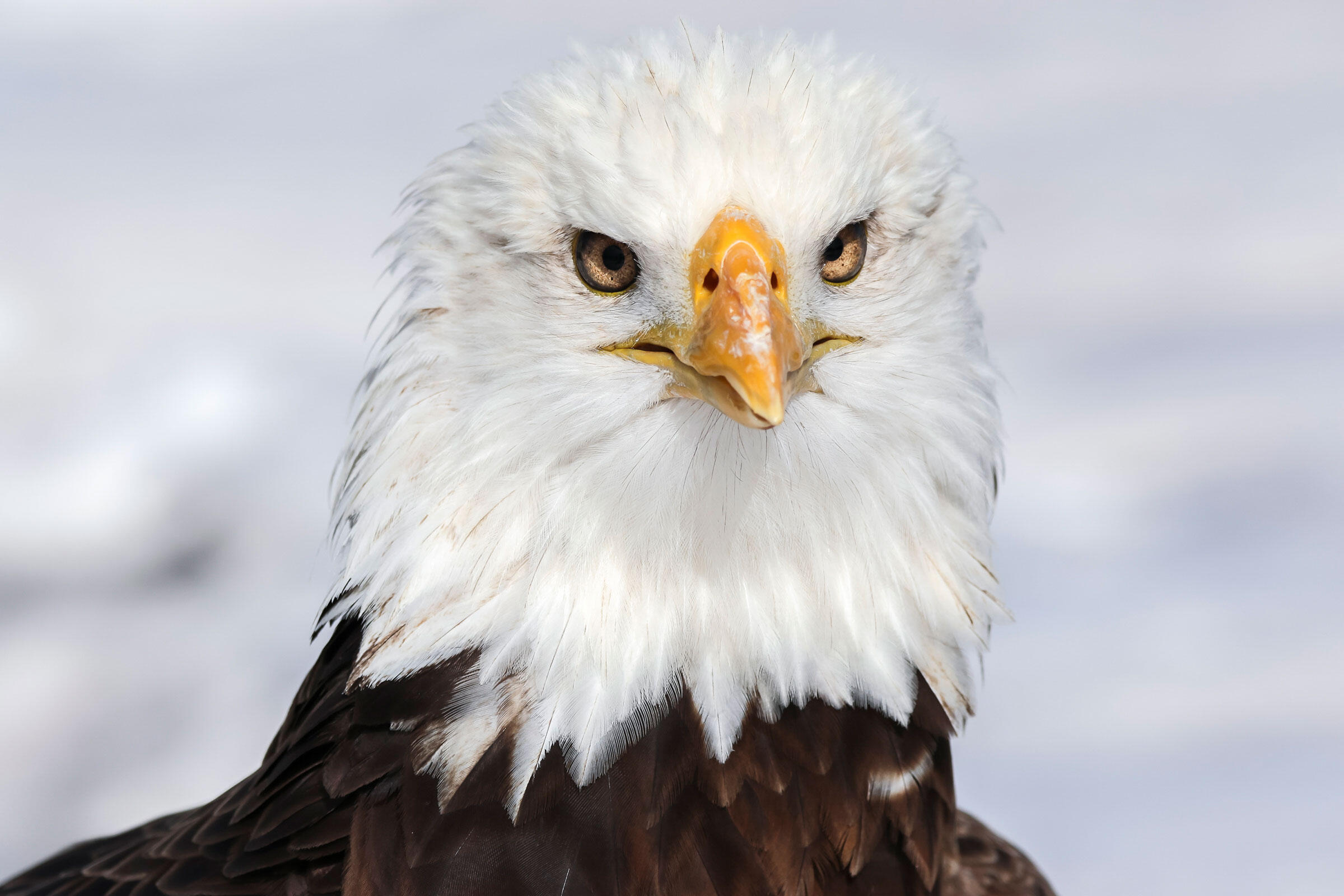 One of the most notorious wind farms—Altamont Pass Wind Farm in northern California—is a lesson in how poor siting can hurt birds. The farm, which straddles a windswept mountain pass, is also in the midst of a major avian migration route, and has been responsible for tens of thousands of birds’ deaths since its inception in the 1960s.

The U.S. Fish and Wildlife Service now recommends that all new wind developments consider several factors before choosing their location. Among these, companies are encouraged to avoid birds’ migration routes, places where raptors’ prey congregates, and water-filled landscapes that would encourage birds to flock, such as wetlands. These guidelines are currently voluntary—but with an update to the MBTA expected in the upcoming year, that may change soon.

In months to come, USFWS plans to overhaul the MBTA, and in a show of pragmatism, it’s proposing that wind farms be allowed "incidental take permits," which would make it legal for wind companies to (unintentionally) kill a limited number of protected species each year. But companies would only be awarded permits if they can prove they’re doing everything possible to avoid bird strikes, like ensuring best siting and deterring birds from blades.

“The permit rule would modernize and strengthen the Migratory Bird Treaty Act and put in place critical new protections for America’s birds from coast to coast,” says Mike Daulton, who leads Audubon’s national policy team. By placing pressure on wind companies to abide by these rules—or face massive fines—it could protect North America’s most threatened species. It’s “a win-win for the industry and for birds,” says Daulton. “It will provide legal certainty to the industry and new protections for the birds.”

If any retrofits are found to be effective, they may become part of the future best management practices for wind farms, too. Recognizing their potential, the U.S. Department of Energy (DOE) awards grants to researchers who want to test experimental technologies, and the non-profit organization American Wind and Wildlife Institute (AWWI) is compiling the first comprehensive catalogue of these solutions. AWWI also plans to conduct independent reviews of each product.

There’s no doubt that turbines—as we know them now—are flawed inventions, and it could be a long, experiment-filled time before we manage to craft the perfect design. But in a warming world, where more and more birds are going to be threatened by climate change, a pragmatic approach to energy creation and safeguarding the planet’s birds might be the one we have to accept.

A new study outlines a solution to the problem of wind turbine collisions. Experts say it’s promising, but they’re not sold just yet.