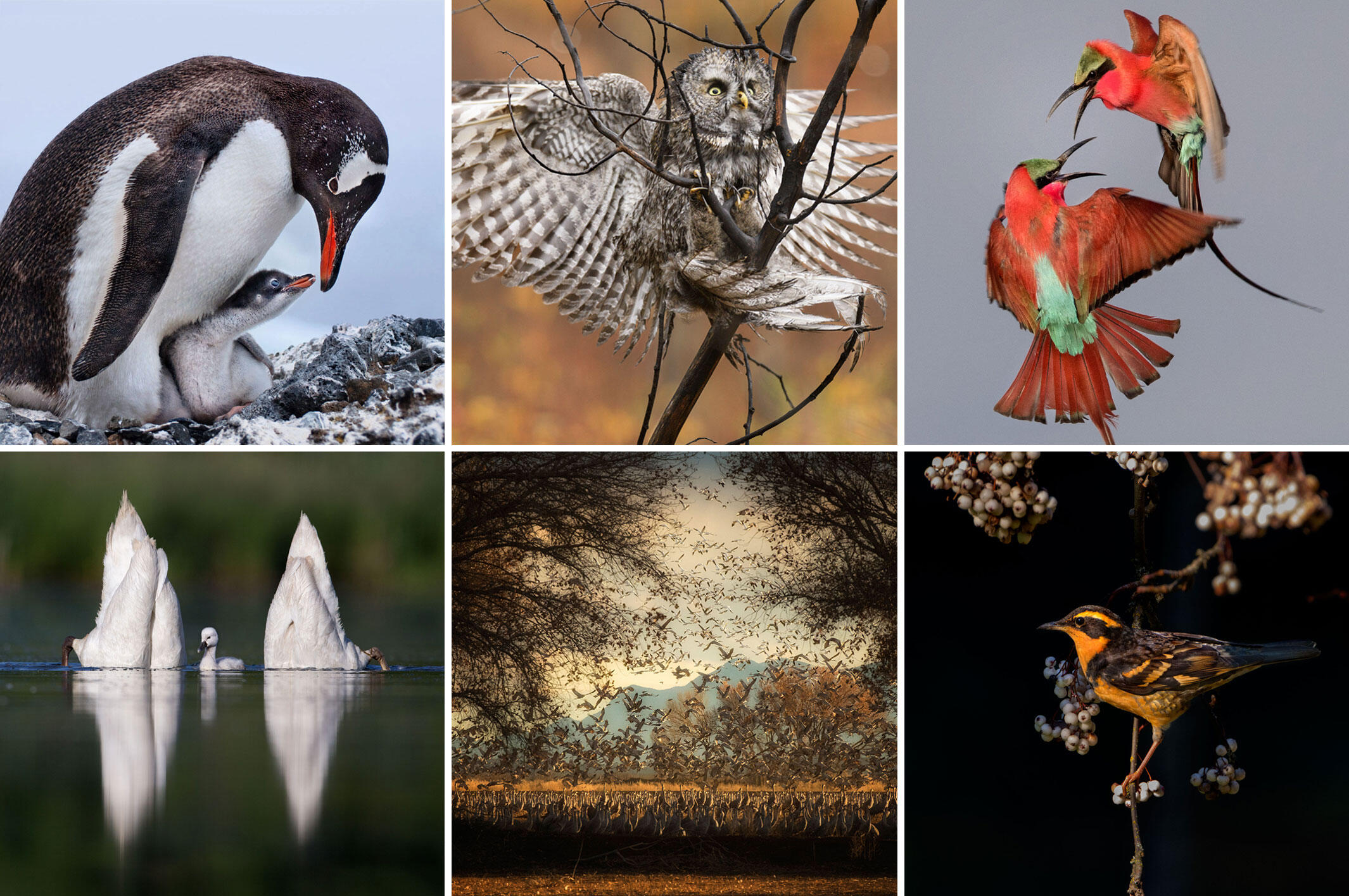 The more than 5,500 photos entered in this year's contest, our eighth, show birdlife at its most vivid, vulnerable, formidable, and elegant. Photographers from 49 states and eight Canadian provinces submitted images in three categories: professional, amateur, and youth. While it wasn't easy whittling those down, the following seven images proved exceptional. The category winners, in addition to garnering cash and trip prizes, are being displayed within the 2017 Nature’s Best Photography Exhibition at the Smithsonian National Museum of Natural History. 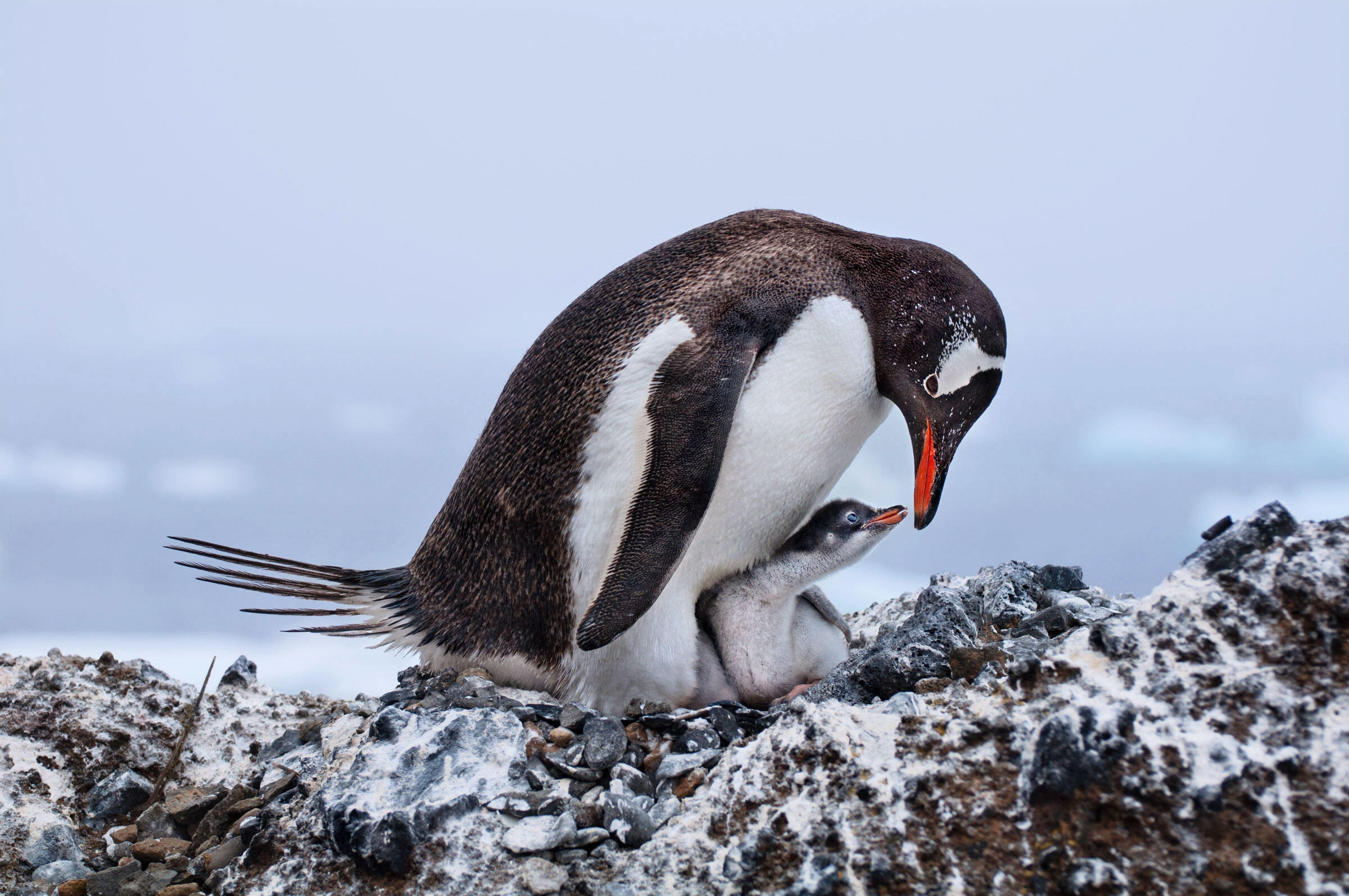 Story Behind the Shot: I had just bought my first DSLR about two weeks earlier for my trip to Antarctica. We were walking along the beach and, as the group moved on, I noticed this penguin in a nest made of rocks. I watched for a long while and, finally, one chick appeared. I took many shots, but this one, with the parent leaning down, touched me the most—the warmest love in the coldest place. Beginner’s luck, I guess.

Bird Lore: Although many people regard penguins as the archetypal Antarctic birds, only a few of the 18 species actually breed in the polar region. One, the Gentoo, has expanded its range in recent years as ice cover has declined, providing access to new breeding sites. Such gains are likely to be offset by reductions in food supply in the warming seas. 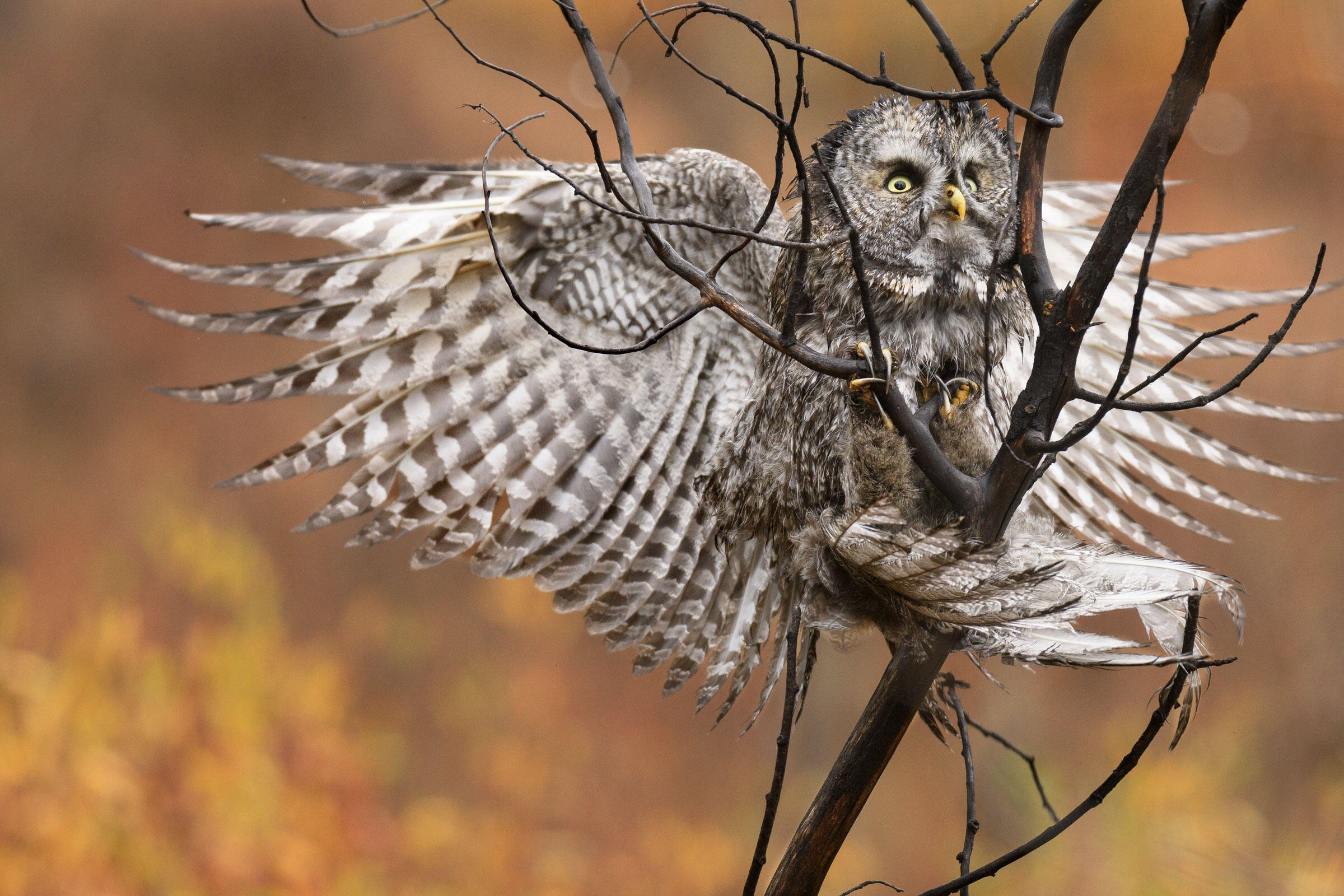 Story Behind the Shot: On a soggy fall morning in Grand Teton National Park, I went on a hike to look for owls. I expected them to be seeking refuge from the drizzle in the dark timber, so I was surprised to see this Great Gray Owl sitting out in the open, getting drenched. After lazily shaking off some water, it took off in my direction. The bird looked like it was flying drunk. It crash-landed into a sapling, gripping tightly with its talons and flapping its wet wings as it struggled for balance. I could tell it was a juvenile, a chick that hatched earlier in the summer, and I thought to myself, “This bird has a lot to learn.”

Bird Lore: More than two feet tall and with a wingspan of more than four feet, the Great Gray looks larger than any other North American owl. Much of its bulk consists of fluffy feathers, however, and this gentle giant preys mostly on tiny rodents. Widespread in boreal forests, these owls are uncommon and somewhat elusive throughout their range. 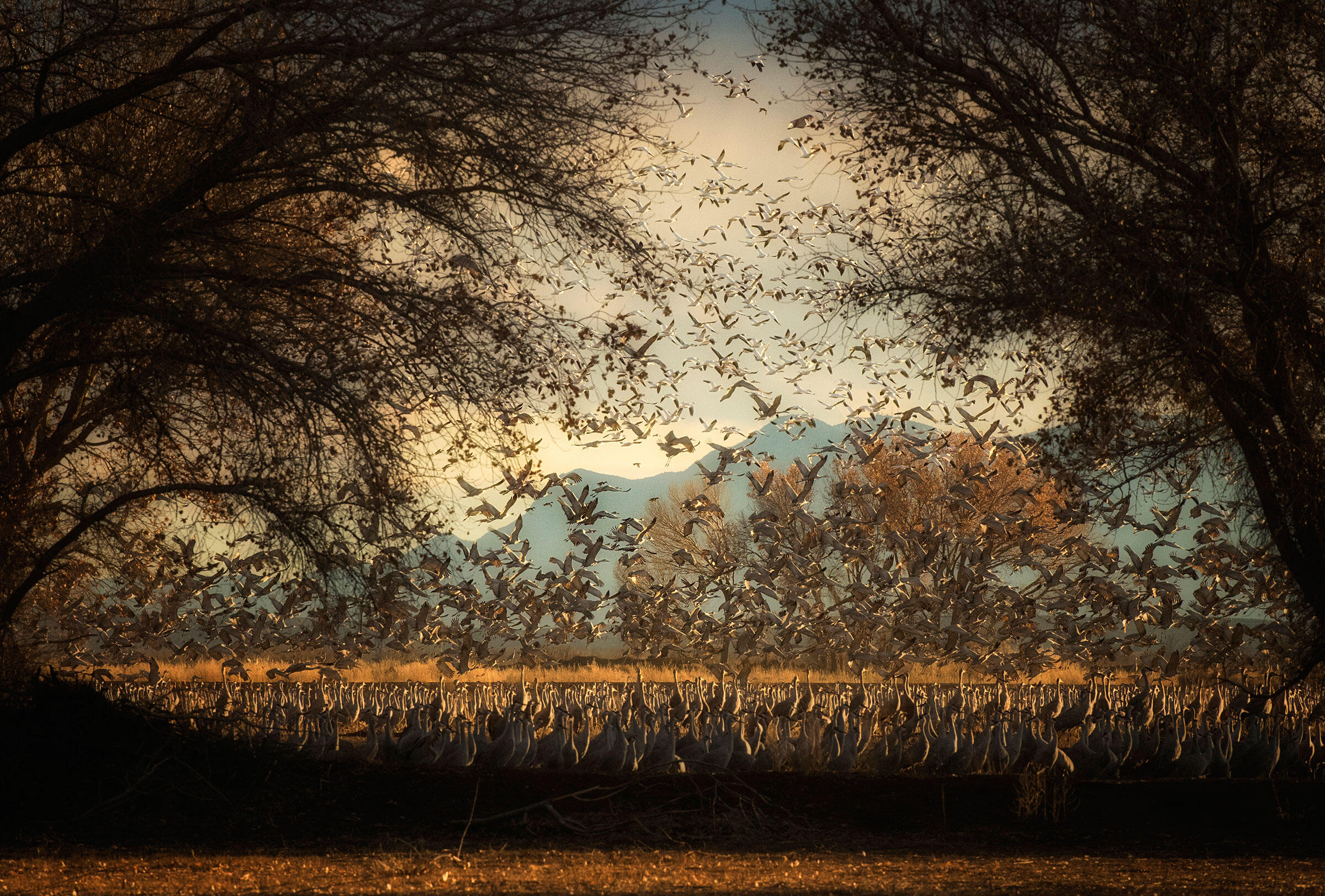 Story Behind the Shot: On a cold and stormy late January afternoon, I stood watching a field as thousands of Snow Geese and Sandhill Cranes fed on corn at the Bernardo Waterfowl Management Area. As I waited for them to ascend, I turned around; statuesque trees framed this scene behind me. Dramatic storm clouds surrounded us and there was nothing but flat gray light—until suddenly, the sun broke through just as the birds lifted off.

Bird Lore: Lifestyles of Sandhill Cranes and Snow Geese differ in many ways, but they converge in winter in central New Mexico, where the mixed flocks provide an irresistible lure for photographers and birders. Wildlife refuge managers there work with farmers to keep some fields of corn and other grains unharvested, providing a ready food source near protected wetlands.

Story Behind the Shot: Washington Park Arboretum in Seattle has a beautiful mountain ash collection that attracts Varied Thrushes. I went there on four of the coldest days this past winter, and every day they were either in the tops of trees or in the back branches—or not there at all because of a marauding Cooper’s Hawk. On the last day, I saw a bird in my peripheral vision. I walked slowly around to position myself; luckily, the thrush was more interested in the tree’s berries, and I was able to capture this eye-level shot. Patience and persistence sometimes pay off.

Bird Lore: The color scheme of the Varied Thrush suggests an American Robin, but its closest relatives are probably among Asian thrushes. Shy and elusive, it hides in dense evergreens while its haunting whistles float through cool forests of the Pacific Northwest. Surveys suggest that populations are declining, perhaps as a result of a warming climate. 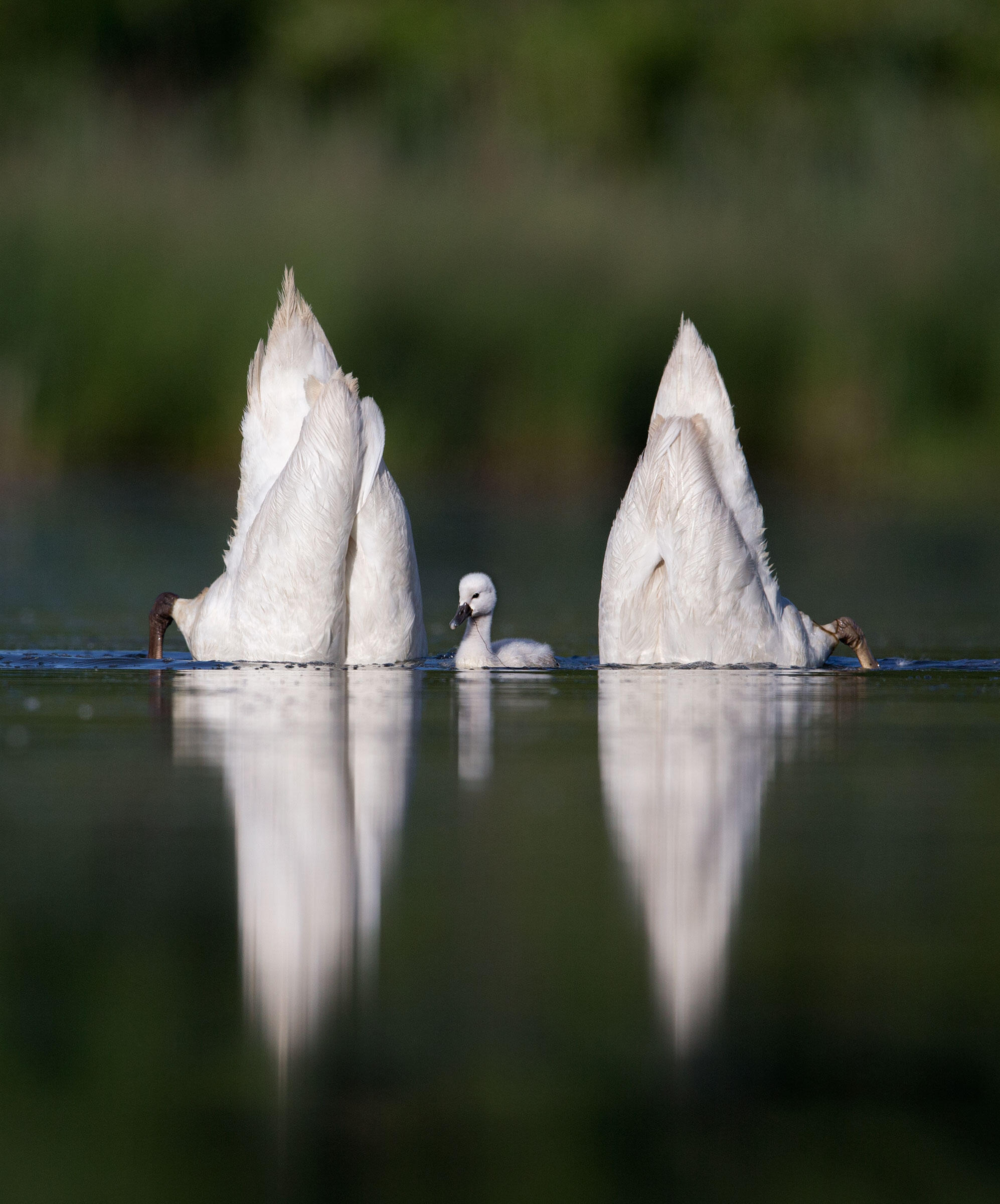 Story Behind the Shot: As I photographed this family of Mute Swans, I noticed the incredible reflection and light. I felt that if the two parents would tip up at the same time with the baby swan (called a cygnet) in between them, I would have something pretty spectacular—and that’s exactly what happened. To me, the photo represents the struggle for survival as this young swan is the only remaining cygnet of eight, despite having such protective parents.

Bird Lore: Swans are related to ducks, but their breeding behavior is notably different. Among true ducks, only females care for the young; males usually depart before incubation ends. Swan pairs stay together all year, and while females do most of the incubating, both parents tend to and guard cygnets.

Story behind the shot: Along a Zambian riverbank in early August, a colony of Southern Carmine Bee-eaters was busy battling for space. Each battle lasted only a few seconds, with the pair lifting off the edge, engaging out over the river, then separating. My challenge was, first, to find a battling pair with a hand-held 600mm lens and, second, to keep them in frame and in focus as they fought. Even with binoculars, a Carmine battle is a short blur of color and beating wings. It was not until I studied my shots that I fully appreciated the jousting and parrying, the widespread tails, the jabs of the beaks. I want to give others the opportunity to feel the same awe.

Bird Lore: Colorful birds that catch insects (including bees) in flight, bee-eaters are restricted to the Old World, mostly the warmer regions. In southern Africa, Southern Carmine Bee-eaters form colonies of hundreds of pairs, or even thousands, creating a gaudy, noisy spectacle as they gather around nest holes excavated in vertical riverbanks. 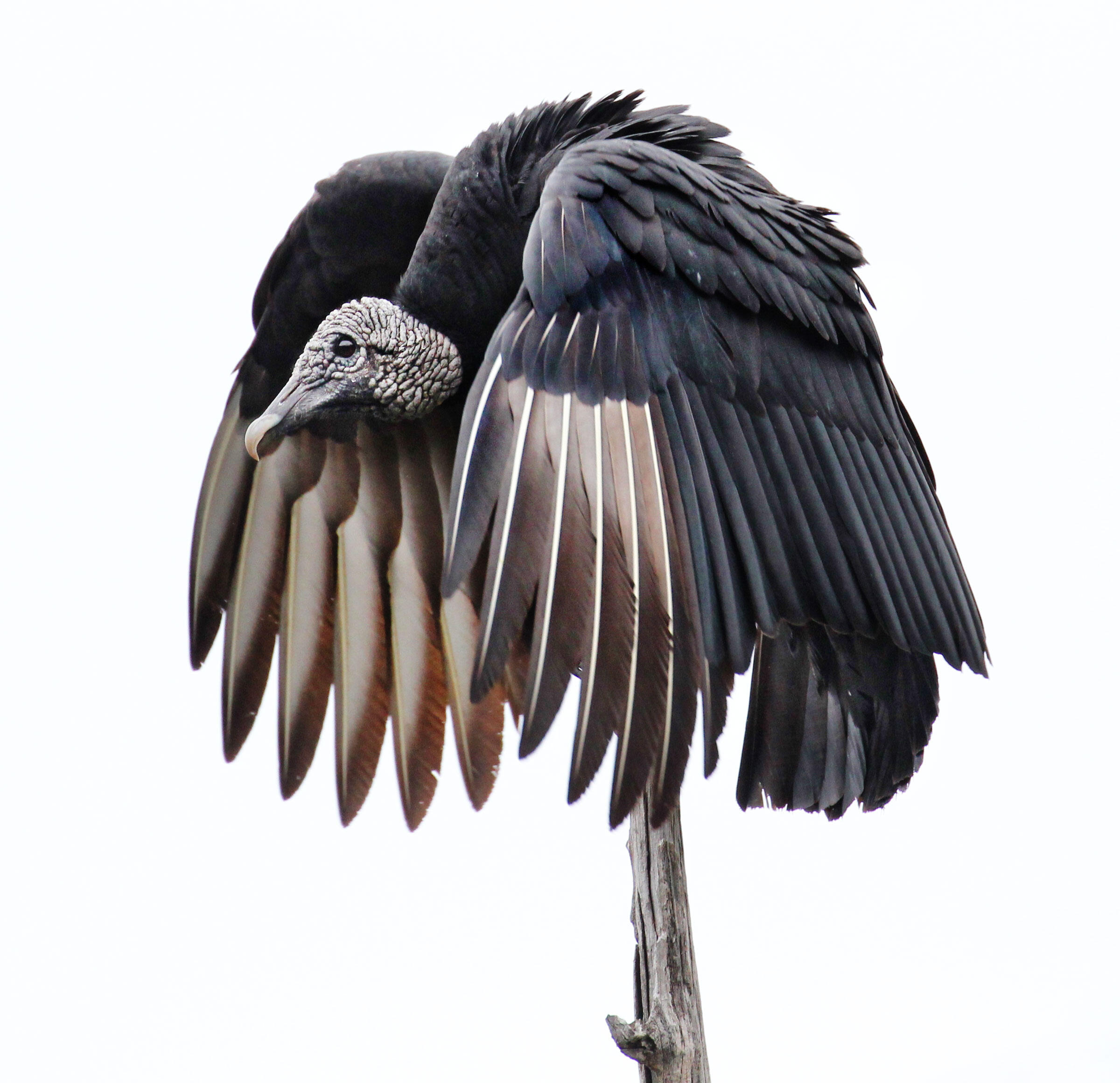 Story Behind the Shot: Because of their plain black coats and rather disgusting eating habits, I often overlook Black Vultures. But then the opportunity arose to photograph a large group feasting on road kill near my house. As I watched them vie for position on a dead tree near their food, I found the vultures to be incredibly feisty and formidable in appearance. The cloudy sky made taking the picture difficult, but by lowering my shutter speed and raising my ISO, I was able to capture this Black Vulture just as he jumped to claim a higher perch. During his effort to balance himself, I snapped this shot.

Bird Lore: Shorter-winged and heavier than its cousin the Turkey Vulture, this stocky scavenger is more restricted to warm climates, where it can reliably find rising thermals for soaring. Black Vultures often find food by watching Turkey Vultures, following them to a carcass and then muscling in on the feast. 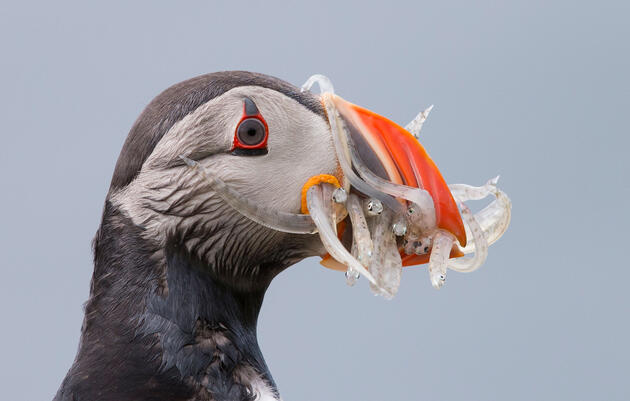 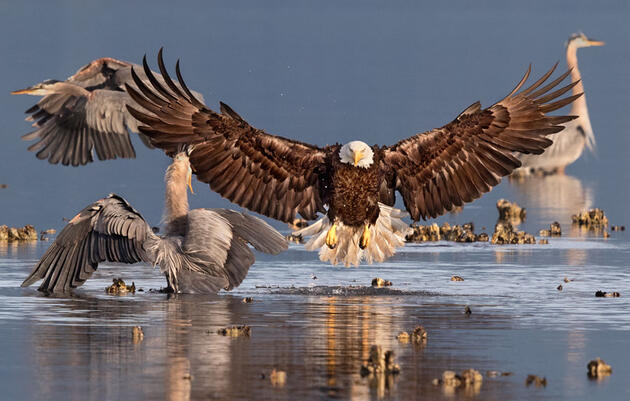 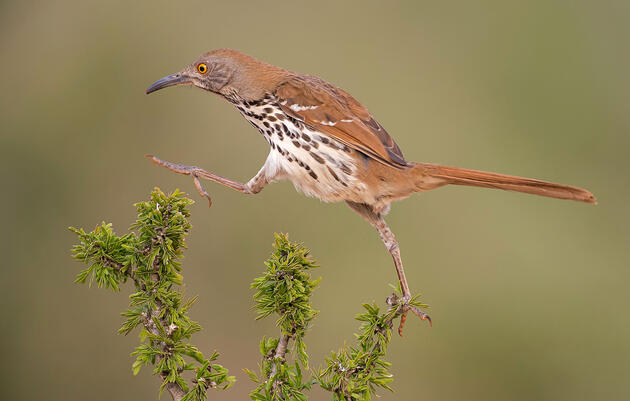 For the first time ever, there’s a sage-grouse.