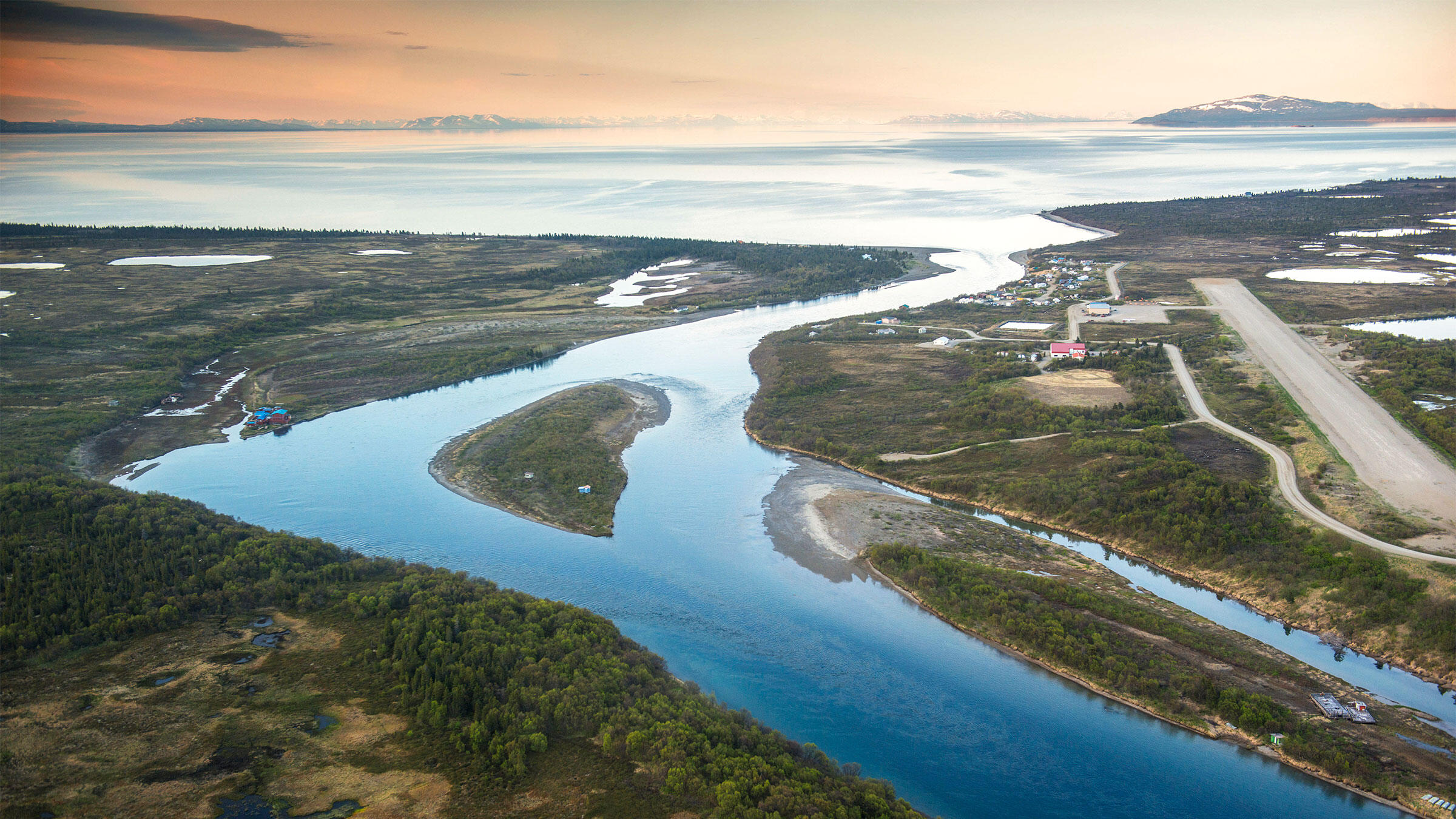 In the last months of President Trump’s first term, his administration is working overtime to advance industrial development on public lands. And Alaska, which encompasses roughly one-third of all federal land, has more on the line than any other state.

Earlier this week, the U.S. Department of the Interior finalized its plan for oil and gas development in the Arctic National Wildlife Refuge. The department’s Bureau of Land Management (BLM) is now set to hold, perhaps before year’s end, the first sale of leases in the refuge’s coastal plain, a remote tundra backcountry—considered sacred by the Gwich’in people and others—with crucial habitat for polar bears, caribou, and birds from all over the world.

In another major milestone expected any day now, the BLM will issue a final decision about its plan to open 80 percent of the 23-million-acre National Petroleum Reserve-Alaska, west of the refuge, to oil drilling. The plan allows development in previously closed areas along the Colville River, where Gyrfalcons and other raptors nest, and in the entire Teshekpuk Lake Special Area, used each year by 40,000 calving caribou, 100,000 molting geese, and 600,000 breeding shorebirds.

Also imminent is a final rule likely to slash protection for the old-growth giants of the Tongass National Forest. The Tongass, located in Alaska’s panhandle, is an important sponge for climate-warming carbon and home to endemic species such as the Queen of Charlotte Goshawk and Prince of Wales Spruce Grouse. More than half of the 17-million-acre Tongass is currently off-limits for road-building and timber harvesting under the federal Roadless Rule, but the U.S. Forest Service is expected soon to lift restrictions on all of it.

Brawling over natural resource development is nothing new in Alaska. It could hardly be otherwise in a state whose vast public lands include some of the wildest, most intact remaining habitats for an abundance of wildlife, but where the economy is built largely on extracting natural resources. Even so, groups fighting to protect Alaska’s wildlife and ecosystems say the number and scale of these major federal decisions is staggering.

“It does feel like an all-out assault on Alaska with this many projects being pushed and approved on rushed time frames,” says Suzanne Bostrom, a staff attorney with the nonprofit environmental law firm Trustees for Alaska. “The pressures on Alaska are at an all-time high.”

A major mine moves ahead

The more high-profile of those two projects is a massive open-pit gold-and-copper mine that has found new life under the Trump administration. In 2014, the U.S. Environmental Protection Agency in effect vetoed the Pebble Mine, which opponents—including conservation groups, commercial and recreational fishers, and some Alaska Natives—say threatens the world’s most productive sockeye salmon fishery in Bristol Bay. The EPA at the time agreed, determining the project could have “significant and unacceptable adverse effects” on the watershed.

But last summer the agency withdrew that proposed veto, removing a major obstacle and allowing the U.S. Army Corps of Engineers to proceed with its review of the project. And in a final environmental impact statement (EIS) released on July 24, the Corps concluded that—even though Pebble would permanently destroy more than 2,200 acres of wetlands and 105 miles of streams—the mine “would not be expected to have a measurable effect on fish numbers and result in long-term changes to the health of the commercial fisheries in Bristol Bay.” That assessment suggests the Corps is likely to soon grant a Clean Water Act permit required for the project to move forward.

“The final EIS for Pebble unequivocally shows it can be developed without harming salmon populations,” said Tom Collier, CEO of the mine’s developer, Pebble Limited Partnership, in a statement. “It clearly states that no long term measurable impacts to returning salmon are to be expected and there will be no long term changes to the health of the Bristol Bay commercial fishery.”

Opponents, however, say the EIS downplays the mine’s impact on the salmon fishery, which is both economically important to the region and culturally significant for Alaska Natives. The project calls for an 8,390-acre mine site, an 82-mile road, a port, and a natural-gas pipeline. This development would damage headwater habitat and have downstream effects that harm the overall fishery, Bristol Bay advocates say. “Our bottom line is the final EIS can only support one permit decision, which is a permit denial,” says Daniel Cheyette, vice president of lands and natural resources for the Bristol Bay Native Corporation, the region’s largest landowner.

Although the favorable final EIS was a major milestone, Pebble Limited Partnership and its Canadian owner, Northern Dynasty Minerals, still have a long way to go. On top of the federal water permit, they also need state permits that will take years to obtain. And they’ll have to secure rights to build infrastructure on private land whose owners are no fans of the project. Plus, the EPA could once again opt to block the mine. And then there are the courts.

“Whether it’s by the Corps denying the permit or the EPA vetoing it, I think that’s the only rational conclusion that’s going to happen at the end of this administrative process,” Cheyette says. “If I’m wrong, there are other avenues.”

A road through the wilderness

The day before it cleared the way for Pebble, the Army Corps, along with the BLM, approved the route for a 211-mile private road intended to open up another new mining district roughly 500 miles to the north.

The Ambler Road project, proposed by the Alaska Industrial Development and Export Authority, will connect the Dalton Highway to substantial mineral deposits that have been explored but not developed along the southern edge of the Brooks Range. The state says building the road will create hundreds of construction jobs and eventually lead to thousands of mining jobs while promoting the domestic production of now heavily imported minerals that the Trump administration has deemed critical. “Federal approval of the Ambler Road is both timely and significant for Alaska’s future,” said U.S. Sen. Lisa Murkowski, a Republican, in a statement. “This project will provide the access needed to responsibly develop a number of high-grade mineral deposits, hopefully leading to greater production of copper, cobalt, zinc, silver, gold, and other metals.”

Building the road will also require permanently filling more than 1,400 acres of wetlands and crossing more than 2,900 streams.

To provide that access, however, the road will cross 26 miles of Gates of the Arctic National Park and Preserve, an 8.4-million-acre wilderness that today has no roads or trails. The road’s planned east-west path cuts across the migratory routes followed by caribou herds, including the largest, the Western Arctic herd, and could impact the animals’ seasonal travels and their availability to subsistence hunters. “Caribou migration may be altered to the point where calving success and winter survival are affected,” according to the BLM’s analysis. “These would both have major impacts on the herd population.”

Building the road will also require permanently filling more than 1,400 acres of wetlands and crossing more than 2,900 streams, including the Kobuk River, which Congress has designated a National Wild and Scenic River. “This is a huge industrial project cutting across one of the wildest roadless parts of Alaska,” Bostrom says. “It’s likely to have far-reaching effects in altering not only the wilderness in this region but altering the water. You’re basically going to dam up a 211-mile stretch of an incredibly hydrologically diverse region.”

Natalie Dawson, executive director of Audubon Alaska, says she’s particularly concerned about the loss of wetlands that now support the fast-declining Rusty Blackbird and shorebirds such as the Red-necked Phalarope. This habitat will become even more important as climate change forces other birds from their current homes, Dawson says. She also warns that building the road will chew up boreal forest habitat for 15 bird species whose populations are already withering, including Blackpoll Warbler and Olive-sided Flycatcher.

Bostrom’s group is one of two nonprofit environmental law firms representing Audubon Alaska and eight other conservation groups in a lawsuit filed August 4 against the Trump administration in an effort to block construction of the Ambler Road. They allege the federal government approved the project without adequate details about its location or design, and failed to fully consider the environmental impacts of building the road, including the need for gravel mines roughly every 10 miles to supply materials.

The road won’t be the last of these big Alaska projects to face court challenges; environmental and Indigenous groups are certain to file lawsuits soon over the Arctic Refuge leasing program, for example. And if Democrats take power after the November elections, they could invoke the Congressional Review Act, which allows Congress to overturn rules within 60 legislative days of when they’re finalized, to reverse these late-in-the-game decisions by the administration. (It would be harder to stop Arctic Refuge development, however, if Interior manages to sell leases in the remaining months before the next inauguration.) Some of these projects could fizzle out sooner; Donald Trump Jr., an avid fisherman, sent an August 4 tweet urging his father to direct the EPA to veto the Pebble Mine.

The long-term strategy for the state’s conservationists, Dawson says, “is what we’re seeing at the national level, which is this push for environmental and social justice and a new power shift that gives voice to people who have been left out of all of our decision-making processes.” The short-term strategy is to fight it out in the courts. The mood? “It’s one of optimistic defense.”

Update August 25, 2020: Today the National Audubon Society and other conservation groups sued the Trump administration over its plan to allow oil and gas development in the Teshekpuk Lake Special Area and other sensitive parts of the National Petroleum Reserve-Alaska.

Update August 24, 2020: The U.S. Army Corps of Engineers today paused the permitting process for the Pebble Mine project described below. Determining that, “as currently proposed, the project could have substantial environmental impacts within the unique Bristol Bay watershed,” the Corps gave the mine's developer 90 days to produce a plan showing how it will offset damage to wetlands and streams.

Also today, the Gwich'in Steering Committee and conservation groups sued the Trump administration over its decision to allow oil and gas leasing in the entire coastal plain of the Arctic National Wildlife Refuge. In a separate lawsuit also filed today, the National Audubon Society and other groups similarly argue that the Department of the Interior broke several federal laws in approving the leasing plan.