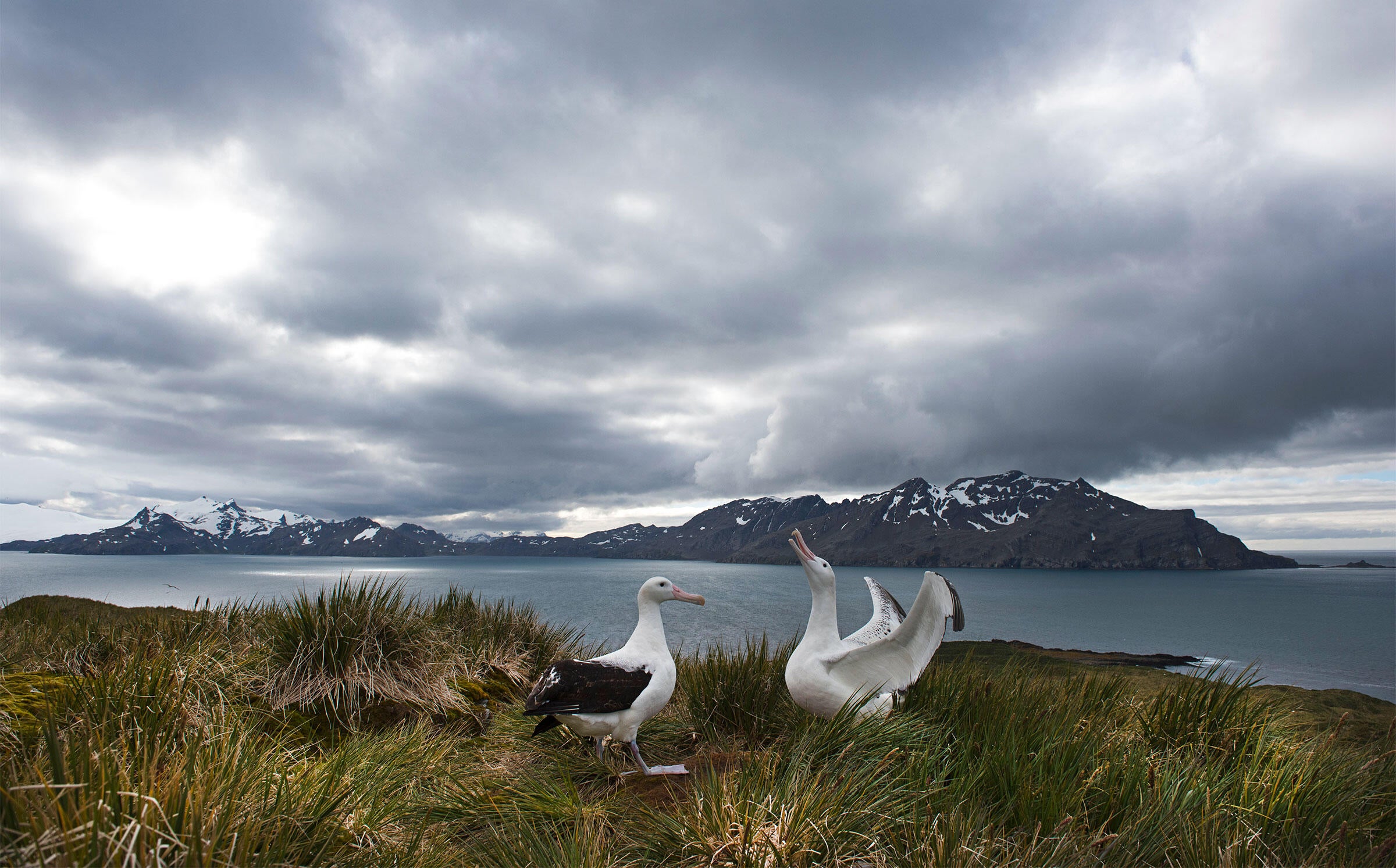 A Wandering Albatross pair on South Georgia near Antarctica. The island's colony was cut by half in the mid-1990s and early 2000s after it faced rising ocean temperatures, higher winds, fewer prey offerings, and ever-present fishing hooks and nets. Photo: David Tipling/Alamy

Climate change and bycatch are creating a ‘toxic cocktail’ for seabirds on an Antarctic island.

Few seabirds possess as rich a literary history as the albatross. In Samuel Taylor Coleridge’s poem “Rime of the Ancient Mariner,” one leads a ship’s crew out of stormy Antarctic waters. In European lore, albatrosses were the manifested souls of lost sailors.

But the birds’ cultural importance can’t save them from devastation by humans. In a recent study in the Proceedings of the National Academy of Sciences, a team of British, French, and Australian researchers found dramatic declines in three different albatross populations—Wandering, Black-browed, and Gray-headed—on South Georgia’s Bird Island. For the last 35 years, colonies nesting there have decreased by 40 to 65 percent.

“It’s a massive decline,” says Deborah Pardo, a scientist with the British Antarctic Survey and lead author of the new report. Her team's detailed analysis pins the population downturn primarily on bycatch in fisheries and climate change. “Sometimes you don’t realize how elements could combine to create a toxic cocktail for endangered [and vulnerable] species," she says. "In our case, we found additive effects of climate change and fisheries.”

The dire connection between bycatch and albatrosses has long been understood. When boats drag baited longlines or cone-shaped trawl nets to pick up large batches of fish, they’ll often trap seabirds as well. It's taken a toll on the world's albatrosses: Of the 22 recognized species, 18 are currently in decline. But as Pardo's research shows, in the Southern Ocean, fishing is just part of the problem. “We’ve started to notice that climate change is taking the lead" in harming albatross populations, she says.

To suss out emerging patterns, Pardo and her colleagues analyzed sub-Antarctic albatross demographics dating back to 1972. They then combined their multi-model results with a four-year, on-the-ground study of the foraging behaviors and nesting grounds for more than 40,000 breeding individuals. With loads of data at their disposal, the scientists learned that, in addition to direct bycatch deaths, adult albatrosses were also succumbing to the more indirect effects of climate change. Over the last century, the South Georgia ecosystem has been plagued by higher temperatures, reduced sea-ice coverage, and stronger winds, which in turn have degraded former nest sites into hostile or unstable habitats. A stronger-than-usual El Niño in 2000 also led to severe food shortages for Gray-headed Albatrosses and eventually caused the population to crash. And throughout the Southern Ocean, rapidly warming waters have thinned out prey sources critical to many seabirds, including fish, calamari, and krill.

The hardships touched adult and newborn albatrosses alike. In the roughest seasons, chicks failed to survive to adulthood, either because their parents had been killed, or because their parents couldn’t bring back enough nourishment. As a result, breeding success on the island sank to new lows, stunting population growth for years after.

When South Georgia’s seabirds take a hit, it threatens the stability of the entire region. “In large numbers, [they] concentrate nutrients from their [diets] that are key to sustaining the vegetation that holds soil on islands and feed the plankton that nurture the forage foods of whales and other marine life,” Steve Kress, the executive director of Audubon’s Seabird Restoration Program, says.

But the ramifications seen in the study extend beyond the Antarctic. Seabirds are useful proxies for measuring and observing the ocean because of their widespread and diverse diets, their visibility, and their tendency to return to the same place to breed year after year. “Their global movements expose them not only to many fisheries, but to multiple climate-induced effects on their food supplies, too,” Kress says. The breeding-colony declines on South Georgia might then also reflect issues throughout the birds' year-round territory.

Albatrosses, which can live up to 60 years and reproduce into old age, are even more vulnerable than other seabirds. “They depend on a long life to maintain populations," Kress says—and when breeding successes are down, the issue begs to be investigated.

While the consequences of bycatch on albatrosses are intricate and daunting, the solutions are relatively simple. Fishing vessels can choose to deploy longlines only at night, when birds aren’t foraging, or use tori lines, which create a physical and visual barrier between birds and baited hooks. Another option is weighted lines that sink more quickly than albatrosses can dive. Strong recovery efforts in Maine and on the West Coast further prove that regulatory improvements can play a hefty role in safeguarding seabird colonies.

Of course, small fixes can't undo the impacts of climate change on seabird nesting sites and prey. But just recognizing the link could help shift the conversation and even inspire new ways to save southern albatrosses from their own stormy waters.