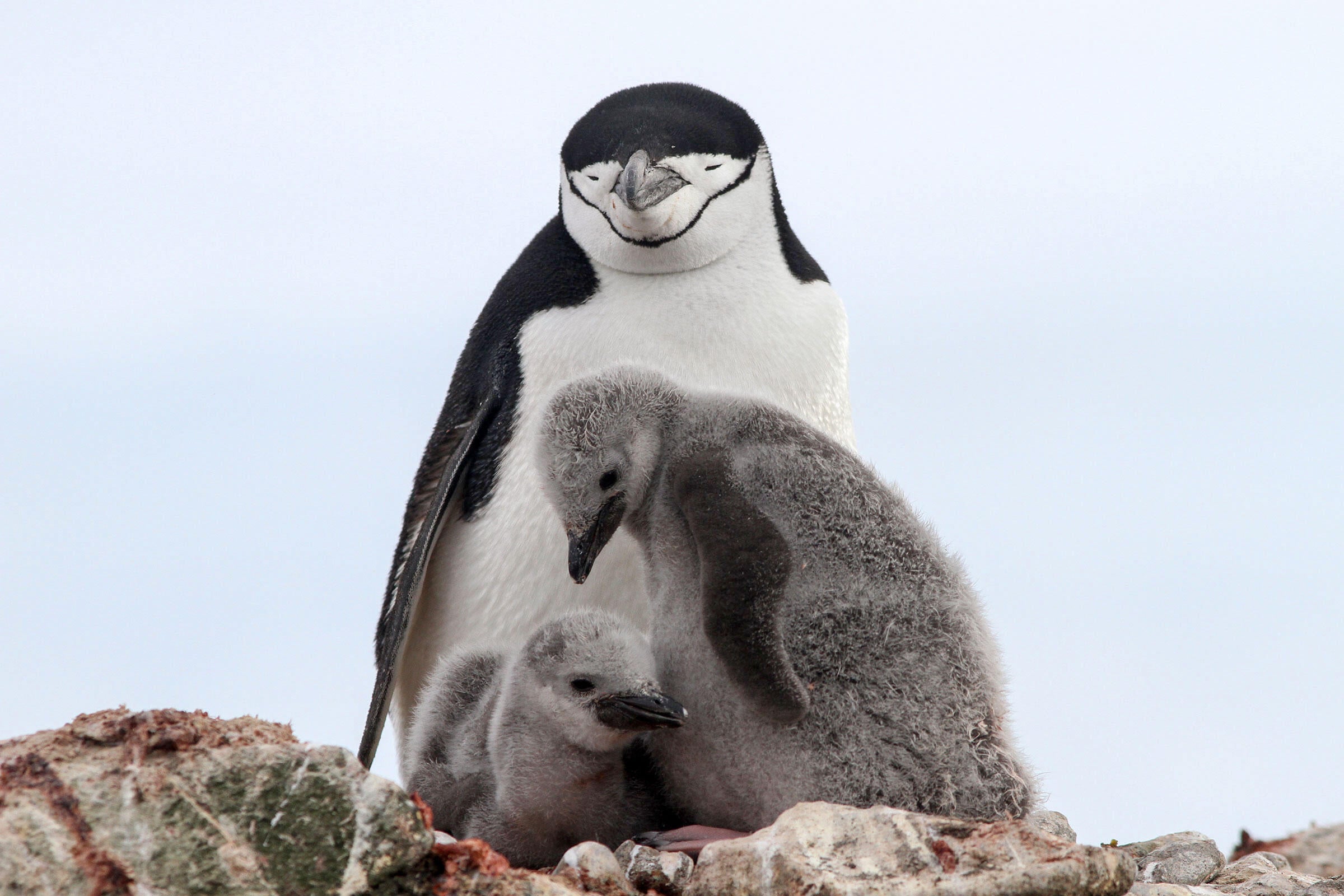 Chinstrap Penguins can raise two chicks every season from eggs laid in a pebble nest. But drastic population declines suggest that in recent decades they haven't found enough food to raise them to adulthood. Photo: Noah Strycker

Scientists counting Chinstrap Penguins on Elephant Island tally fewer than half as many birds as nested there almost 50 years ago.

One month ago, I arrived with a team of scientists at Elephant Island, Antarctica—a lonesome, 29-mile-long hunk of glacier and granite off the tip of the Antarctic Peninsula. The island was chronicled by a member of Ernest Shackleton’s ill-fated 1916 expedition as “about as inhospitable as one could well imagine,” and it hasn’t changed much in the past century. Even today, some of its coastlines have been explored by fewer people than have stepped foot on the moon.

We came to the end of the Earth with a specific purpose: to see how Chinstrap Penguins are coping with a shifting environment. Climate change has hit the Antarctic Peninsula hard in the past half century, with mean annual temperatures up by several degrees. Just last week, an Argentinian research station 160 miles south of Elephant Island recorded an air temperature of 64.9 degrees Fahrenheit, the hottest ever measured in Antarctica. We suspected that warmer conditions are causing cascading impacts on ice, krill, and Chinstraps, perhaps exacerbated by commercial fishing and rebounding whale populations. Our results are even more stark than I could have imagined.

This 2020 expedition is the first penguin survey of Elephant Island since a single British census almost 50 years ago, in 1971. Unlike many of the world’s other 17 penguin species that occupy variously grim categories on the IUCN Red List, the Chinstrap is rated as “Least Concern.” It’s one of the most abundant animals in Antarctica, with an estimated population of 8 million individuals according to the IUCN. But Chinstraps choose to nest in particularly inaccessible places, often near pounding surf on off-the-map Antarctic islands. So the actual figures are fuzzy, and nobody knew whether the Chinstrap Penguin population on Elephant Island was increasing, decreasing, or remaining stable.

Even if you’ve never met a Chinstrap, you could easily identify one—just look for a bird with the shape and swagger of a bowling pin, wearing a fine tuxedo and a tiny helmet fastened to its head. Like most other penguins, Chinstraps have little fear of people and waddle around confidently, charming the boots off anyone who crosses their path. They congregate on Elephant Island each summer to raise their chicks in dense, cacophonous colonies alongside feeding grounds in the krill-rich Southern Ocean before swimming hundreds of miles offshore to spend the long Antarctic winter at sea. The Chinstrap’s range is concentrated on several island groups off the Antarctic Peninsula, with Elephant Island right in the middle.

Our scientific team from Stony Brook and Northeastern universities arrived here in January on two ice-breaking ships supplied by Greenpeace International, and equipped with several small boats, three camera drones, a tented camp, a crew of polar logistics experts, and a window of exceptionally fair weather. We began the survey by wading into an unnamed cove on Elephant Island’s south shore while waves crashed over our inflatable boat and bracing katabatic winds whistled off a nearby glacier. Having perhaps never before seen a human, the Chinstraps thronging the beach greeted us with amiable curiosity, but they didn’t linger long. Commuting toward one colony on a high ridge, they scaled a steep snowfield using sharp toenails and beaks like crampons and ice axes, negotiating breathtaking slopes. To keep up, I climbed hand-over-hand on near-vertical pitches in some places.

Surveying penguins is a lot like door-to-door canvassing: You stake out an area and, using a thumb clicker, count one penguin at a time. It ultimately took 11 days for our team of six scientists to survey the whole rugged island. Four of us counted on the ground while two drone pilots flew a camera over each colony. 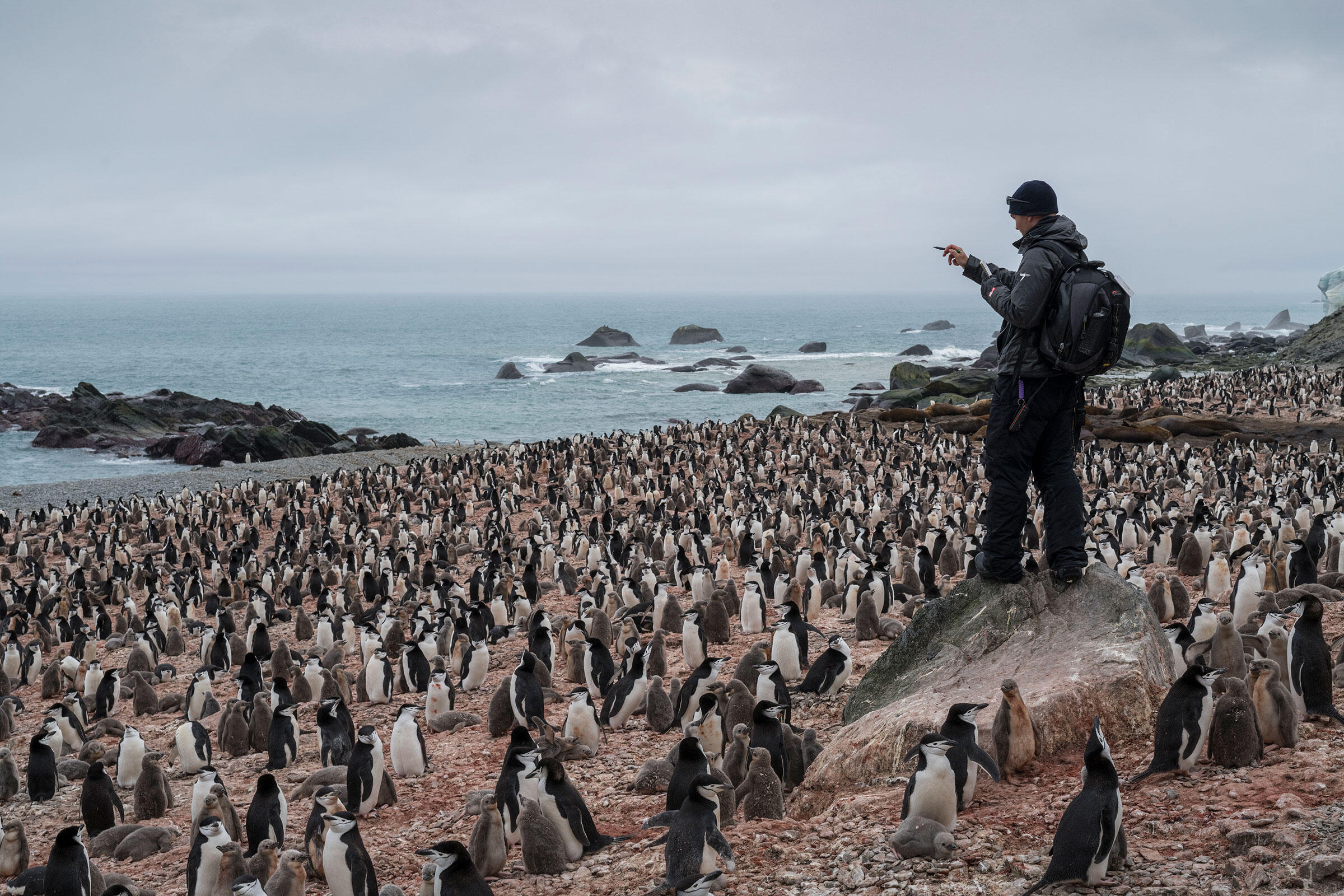 The results startled us: In the past half century, the number of Chinstraps nesting on Elephant Island has declined by more than 50 percent—down to 52,786 breeding pairs from the previous survey count of around 122,550 pairs. Assuming there are two adults at every nest, this means that more than 100,000 penguins—about 500 tons of penguin biomass—have quietly gone missing from this one island. Where did all those birds go? Tagging studies show that young penguins return to their natal colony when they mate for the first time, so the Chinstraps are probably not somewhere else. Their population must have declined from reduced breeding success and increased mortality over many years, likely because of shifting access to krill, their favorite food.

Antarctica is home to five penguin species, ranked here from largest to smallest global population. Many of these estimates are already dated by a decade or more.

“These results suggest to me that the functioning of the Southern Ocean ecosystem is broken in some way,” says Heather Lynch, my research advisor at Stony Brook University and the expedition organizer. “These impacts are rippling up the food web to species like the Chinstrap Penguin. This expedition lends even greater weight to the hypothesis that climate change is largely responsible for the changes we are seeing.”

Ron Naveen, a penguin expert whose nonprofit research program Oceanites has monitored penguins on the Antarctic Peninsula for the past 25 years, notes that nearby populations have also shrunk. “We’ve had Chinstrap colonies in the peninsula showing similar declines,” he says. “Given how the region has warmed up, the big drop is no surprise at all.”

The Chinstrap trend fills a gap between Adélie and Gentoo Penguins, which are better studied and have become known as climate change “losers” and “winners,” respectively. Adélies, closely tied to sea ice, have declined in this region, while Gentoos, which don’t mind open water and can more readily adjust their nesting behavior and diet, have increased, including on Elephant Island. Chinstraps seem to lie somewhere in between. Even with abrupt declines at this colony, the species doesn’t appear to be existentially threatened the way many others are today; plenty of Chinstraps still inhabit a wide swath of Antarctica. So why worry if some of them disappear from a forsaken island?

This is a philosophical question that conservationists are trying to answer about all kinds of creatures in decline. Sure, Chinstraps aren’t in imminent danger of extinction, but the diminishing welfare of still-common species warns us about broad environmental changes taking place. “Just because these penguins are remote and hard to study doesn’t mean that the collapse of their populations shouldn’t be taken seriously,” Lynch says. “Finding such dramatic losses really shows that Chinstrap Penguins are doing poorly.”

It’s a poignant thought: A hundred years ago, when one of Shackleton’s men described penguins as “the dearest, quaintest, and most winsome birds imaginable,” he couldn’t have predicted how these birds would be affected by rapid industrial growth on the other side of the globe. Now we know, and I can't help but wonder, what will people write about Elephant Island's Chinstrap Penguins in another 100 years?

Noah Strycker is a birder, author, and scientist who has traveled to Earth's polar regions more than 40 times. In 2015, during a quest spanning 41 countries and all seven continents documented on Audubon, he set a world record by finding 6,042 species of birds (more than half the birds on Earth) in one calendar year.

Follow Adélie Penguins On Their Journey Into the Long Polar Night

Emperor Penguins Are Marching to Extinction at Current Emissions Levels

A new study once again underscores that we need to limit global warming to 1.5 degrees Celsius to save many of our most beloved bird species.