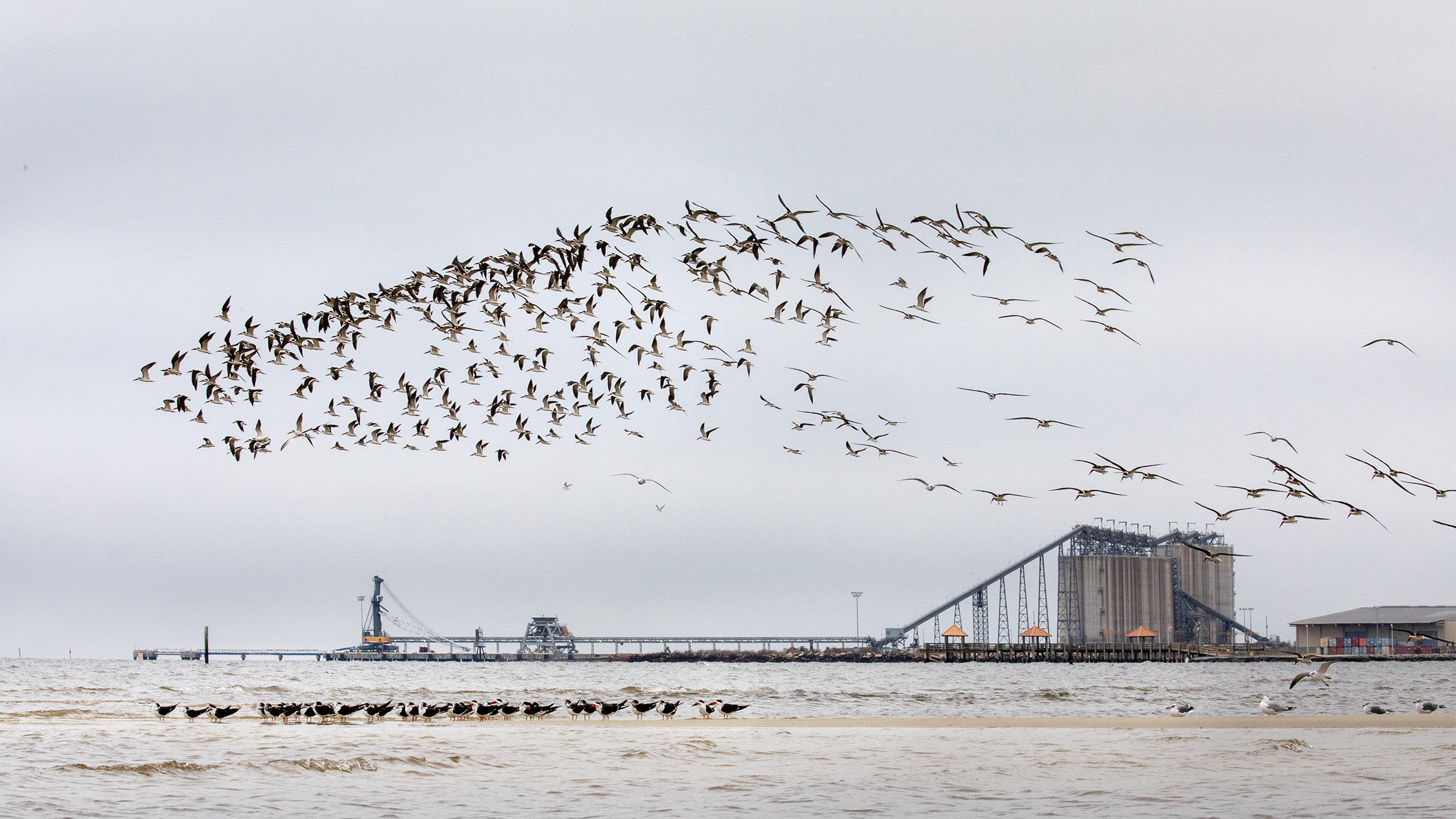 Black Skimmers fly over a port on the Gulf Coast. Photo: Mike Fernandez/Audubon

Brushing aside decades of legal precedent and growing alarm over dwindling bird populations, the Trump administration today moved to make official a policy dramatically limiting the federal government’s authority to hold industry accountable for killing birds under one of the nation’s oldest conservation laws.

The century-old Migratory Bird Treaty Act (MBTA) makes it illegal to pursue, hunt, shoot, wound, kill, trap, capture, or collect migratory birds or their eggs or nests—or attempt to do so—without a permit. For the past half-century, the government’s position was that the law prohibited “incidental take,” or the inadvertent but often predictable killing of birds, usually through industrial activities. Though rarely used, that legal authority helped convince industries to adopt bird-saving practices and technologies. But in late 2017, Daniel Jorjani, the department’s top lawyer, issued a memorandum stating that the U.S. Fish and Wildlife Service (FWS)—the agency in charge of implementing the MBTA—would no longer enforce incidental take.

Today’s proposal from the FWS would solidify that opinion as a formal rule. Even though it mirrors a policy that’s already being implemented, the proposed rule is a major development. A future president could easily scrap a predecessor’s legal opinion, but the rule, if finalized, would be much harder to undo. The public will have the opportunity to weigh in on the change during a 45-day period beginning on February 3.

On a call with reporters, agency officials described the proposed regulations as necessary to clarify the law and downplayed their effect. “We will continue to work with all partners to reduce impacts to migratory birds and their habitat,” said Jerome Ford, FWS assistant director for migratory birds.

Conservation groups, however, blasted the move. “The Trump administration’s Bird Killer Department, formerly known as the Department of the Interior, just gets crueler and more craven every day,” said David Yarnold, president and CEO of the National Audubon Society, in a press release. “And today they are doubling down despite the fact that America did not elect this administration to kill birds.”

Audubon cited recent research estimating that North America has lost more than a quarter of its bird population in the past 50 years—some 3 billion birds in all.

“The Trump administration is digging its heels in on a novel and problematic interpretation of the MBTA that goes against decades of Republican and Democrat administration policy,” said Jessica Scott, who was the U.S. Environmental Protection Agency’s lead attorney on migratory bird issues from 2010 to 2014, in an email. “This interpretation cripples the MBTA, a century-old statute that has been a crucial tool in protecting birds.”

As Interior now interprets the MBTA, for example, the law could not have been used to hold BP accountable for the devastating impacts on birds of its 2010 Deepwater Horizon oil spill. Under the longstanding policy that incidental take was prohibited, the company was forced to pay a $100 million fine for killing an estimated 1 million birds. That money has gone toward an unprecedented patchwork of conservation projects around the Gulf Coast that are still working to reverse the damage a decade later.

It doesn’t take such a high-profile catastrophe for the administration’s hands-off approach to have significant on-the-ground ramifications. The New York Times recently reported that, guided by Jorjani’s interpretation, the FWS has declined to investigate bird deaths and even advised local governments and businesses against taking steps to protect birds. In one incident reported by the paper, the FWS told the U.S. Coast Guard that it could not take enforcement action when a vessel spilled oil that killed about two dozen seabirds. In another, the agency reassured a Wyoming oil and gas company that it need not report bird deaths.

The FWS rarely used its authority under the MBTA to punish companies; there were 14 federal prosecutions for incidental take in the two decades before Jorjani issued his opinion, according to an analysis Scott co-authored. Even so, the threat of penalties was a powerful incentive for industrial operators to take often simple and relatively inexpensive steps to prevent bird deaths, such as covering oil waste pits to stop waterfowl from landing in them, or spacing electrical wires farther apart than an eagle’s wingspan to avoid electrocutions.

The nationwide avian death toll each year includes up to 1 million birds killed by oil pits and as many as 64 million killed by power lines. Advocates say those numbers would likely be much higher if the prospect of MBTA fines hadn’t compelled companies to work with the FWS to find solutions to mitigate the damage.

Claiming that the incidental take policy is an unnecessary burden to business, the oil and gas industry has repeatedly urged the federal government to limit the MBTA's reach. The FWS press release announcing the proposed rule quoted several industry representatives, including Western Energy Alliance President Kathleen Sgamma. “The Alliance is particularly supportive of this rule, as MBTA prosecution had been targeted at oil and natural gas companies even for low numbers of common birds deaths, while other industries went unscathed for much greater numbers, with some even being allowed to kill threatened and endangered species,” Sgamma said.

The rollback of migratory bird protections already faces stiff resistance in multiple venues. Audubon, other conservation groups, and eight states are fighting the administration’s MBTA interpretation in a pair of lawsuits filed in 2018.

Meanwhile, California recently passed a law asserting its authority and continued intention to hold companies accountable for incidental take, and a Vermont legislative committee held a hearing last week on a similar measure, with testimony from Audubon Vermont.

And on Capitol Hill, the House Natural Resources Committee this month approved legislation that would amend the MBTA to make it clear that incidental take is prohibited. That bill also directs the FWS to establish a permitting process that would assure companies they won’t be prosecuted for incidental take, so long as they adopt recommended proven practices and technologies to prevent bird injuries and deaths.

It's that type of proactive stance that the administration should take to protect birds, wildlife advocates argue. “Whether they are in our backyards or the most remote wilderness, birds connect us to nature,” said Jamie Rappaport Clark, president and CEO at Defenders of Wildlife, in a statement responding to today's news. “Instead of attacking our nation’s bedrock wildlife conservation laws, the Trump administration should be reaffirming and strengthening the nation’s commitment to protecting birds.”