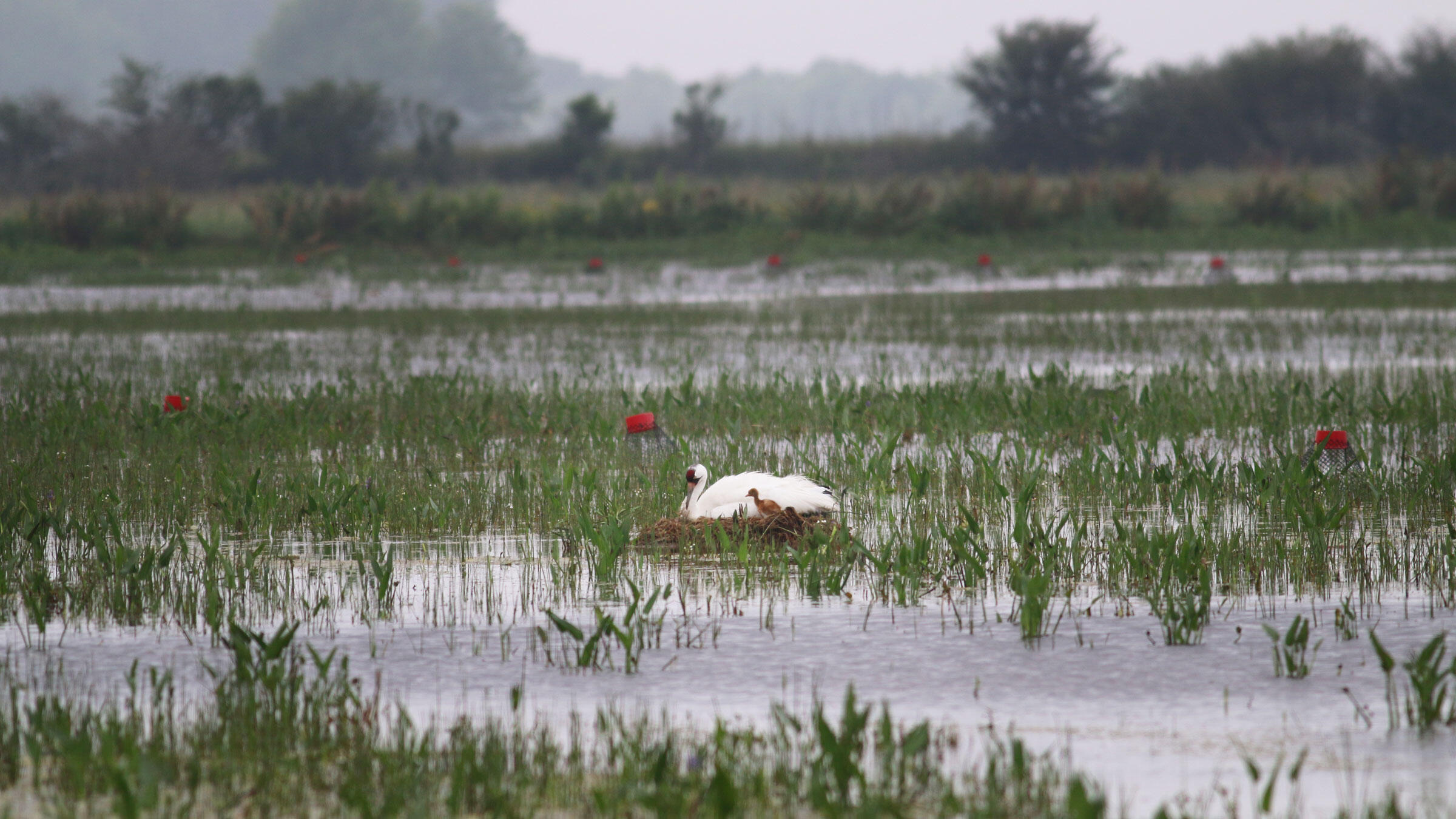 Louisiana's newest Whooping Crane parents with their baby. The couple built their nest on a private crawfish farm, and the owners are ecstatic to host them. Photo: Sara Zimorski/Louisiana Department of Wildlife & Fisheries

Can one baby crane carry the hopes of an entire endangered species?

The birth of any bird is reason to celebrate, but the arrival of one leggy chick in Louisiana this week is particularly profound: It’s the first wild Whooping Crane born in the state in 75 years.

The last time these long-necked, crimson-faced birds successfully shacked up in the Bayou State, Franklin D. Roosevelt was president, Ernest Hemingway was churning out novels, and the United States was on the brink of entering World War II. Rampant hunting in the late 19th and early 20th century and severe habitat loss devastated Whooping Crane populations, and by 1941 fewer than two dozen birds were left in the world. When the Endangered Species Preservation Act passed in 1966, the species was among the first to gain federal protection.

Fortunately, a lot has changed in the decades since the Whoopers disappeared from Louisiana's wetlands. Captive breeding programs and wetland restoration projects have helped to bring the number of individuals back up to about 600—the majority of which migrate between Canada’s Wood Buffalo National Park and Texas’s Aransas National Wildlife Refuge.

Five years ago the Louisiana Department of Wildlife and Fisheries (LDWF) teamed up with a coalition of state and federal agencies to bring the bird back to the bayou through a 15-year repopulation program. In the spring of 2011, 10 captive-bred juveniles were released at the White Lake Wetlands Conservation Area in Vermilion Parish, Louisiana, and each year since, LDWF has added new juveniles to the cohort. While breeding programs in Wisconsin and Florida train Whoopers to migrate, these year-round residents will spend their life along the Gulf Coast, just like their Louisiana ancestors did for generations. The birds are closely monitored with help from local landowners and conservation allies, and have even taken up residence at Audubon Louisiana’s 26,000-acre Paul J. Rainey Wildlife Sanctuary nearby. But the program has suffered a series of setbacks, including failed nestings and the poaching of five cranes. Whooping Cranes take their nuptials seriously, which makes matters even more difficult. It can take anywhere from three to five years for a crane to reach breeding maturity and select a life mate, and since pairs often only raise one surviving chick, the loss of a single bird can be a blow for the whole species. The White Lake flock needed a successful mating season badly.

So when one Whooping Crane pair began carefully tending to their nest back in March, conservationists saw a glimmer of hope. “We’ve had a good feeling about them,” Sara Zimorski, LDWF biologist and leader of Louisiana’s Whooping Crane project, says. This is the first time the young lovers (just four and two years old) took up roost together, but they’ve already set the bar high for other nesting couples in the area. “They’ve been really in sync with incubating and tending to the eggs and the nest. They seem to be a really good pair,” Zimorski says. Their first chick finally hatched on Monday.

The new Whooper still has a ways to go before it can be officially added to the population count. “Whooping Cranes take about three months to fledge,” Zimorski says. “They grow very quickly, but they are also very vulnerable until they can fly." Currently there are an estimated 42 individuals in the state. Fingers crossed, in three months time, that number will be 43.

Update: On Wednesday, Louisiana's new Whooping Crane parents made history again as they welcomed their second chick into the world.

Update: LDWF has just released footage of the Whooping Crane chicks during their first few weeks of life on the crawfish farm. Unfortunately, one of the chicks disappeared just shy of its one-month birthday, but its sibling is growing bigger and stronger every day. Check out the video below.

Correction: In a previous version of this article, Wood Buffalo National Park was mistakenly referred to as Wood Bear National Park.