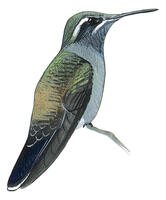 Sometimes we lose numbers on our life lists when the American Ornithological Society’s Committee on Classification and Nomenclature (informally known as the Checklist Committee) delivers its annual bird-name update. Sometimes we gain new ones. And sometimes a familiar species winds up with a new name or is classified in a different family.

This year’s report from the AOS Checklist Committee was published on June 24. Only a few of its changes, which are decided by a panel of leading experts, will be of direct interest to birders—but this gives us a good opportunity to talk about the reasons behind the decisions.

The hummingbird family is incredibly diverse with more than 350 species in tropical regions. To give them distinctive names, scientists have combined imagination with poetry. On a list of South American birds we see sunangels, sungems, sunbeams, hillstars, woodstars, starfrontlets, emeralds, sapphires, topazes, comets, coquettes, coronets, lancebills, metaltails, and so on. They’re all members of the same family, but they have beautiful and unique titles. By contrast, those in the United States and Canada mostly have bland labels like Rufous Hummingbird or Black-chinned Hummingbird.

The largest member of the hummingbird family regularly found north of Mexico is the Blue-throated, a flashy denizen of Southwest mountain canyons. It’s one of seven members of the genus Lampornis. Five of those species, with ranges from southern Mexico to Panama, have been called mountain-gems for many years. By changing the name of Blue-throated Hummingbird to Blue-throated Mountain-gem, the AOS brings consistency across the group. (The final member of the genus now becomes Amethyst-throated Mountain-gem; it’s another tropical species that’s been recorded north of Mexico twice.)

For people who have birded in the Southwest for years, the name “mountain-gem” might seem jarring at first. But it’s hard to deny that the Blue-throated is a true gem of these mountains.

The White-winged Scoter is split into three species, and all of them might be seen in North America.

The White-winged Scoter is a big, dark duck that nests around forest lakes in Canada and Alaska and winters in coastal waters across the Pacific and Atlantic Oceans. Two very close relatives nest in northern Europe and Siberia.

Originally, in the 1700s and 1800s, all three of these were described as separate species. In those days it was the norm to treat every new variation with full species status. The trio was grouped into one species in 1920, as part of an ornithological lumping phase that lasted through the 1970s at least. Since then, the pendulum has started to swing back the other way, with scientists looking more closely at the classification of these birds and finding that many are more distinct than they appear.

A lot of European ornithologists had already split the European form (Velvet Scoter) from the White-winged Scoter. The sticking point was deciding what to do about the Siberian form, which is not as well known. With this year’s report, the AOS is treating all three as full species. This decision is not based on a lot of new information—it’s more an acknowledgment that the lumping back in 1920 wasn’t based on any particular evidence.

The Siberian species—now called Stejneger’s Scoter—strays to Alaska in spring. At Gambell, St. Lawrence Island, alert birders have picked out at as many as half a dozen Stejneger’s mixed in with flocks of White-winged Scoters. Only adult males are safely identifiable: Their flanks are blackish, not brown, and the knob on the bill has a distinct hook shape. A few Stejneger’s also have been spotted on the Alaska mainland, and there’s been at least one sighting in California.

Meanwhile, the Velvet Scoter, known by the extensive yellow on the male’s bill, has wandered to Greenland and might reach eastern Canada or the Northeastern states. Until now, few people have been looking closely at White-winged Scoters; with this three-way split, they’re sure to get a lot more attention, as birders seek rare strays to add to their lists.

Many families of birds include well-defined groups of species that differ from other members of the family. Sometimes they have names to set them apart. In North America, for example, the screech-owls (Eastern, Western, and Whiskered) are clearly different from other owls. The pygmy-owls (Northern and Ferruginous) belong to another distinct group. The AOS has chosen to hyphenate these group names, though that rule hasn’t been applied consistently in the past.

One note: Not every bird with multiple words in its name is part of a group. We hyphenate night-herons because they’re close relatives within the heron family. But we don’t hypenate Great Blue Heron and Little Blue Heron because they aren’t closely related; they’re members of different groups, and both just happen to be somewhat blue.

That brings us to the doves. Among doves in the United States, Common Ground Dove and Ruddy Ground Dove are very similar: Both belong to the genus Columbina and had been hyphenated as ground-doves for many years. But heading south through Central and South America, we find members of several other genera that are also called ground doves. What’s more, two members of the genus Columbina, including the Inca Dove, don’t have the word “ground” in their English names. Thus, the birds called ground doves don’t make up a cohesive group, so they shouldn’t have a hyphenated group name.

Several scientific names are changing this year as well.

The split of White-winged Scoter resulted in a shuffling of names. The North American species keeps the English label that we’ve been using, but its scientific one changes from Melanitta fusca to Melanitta deglandi. The new lineup is:

All of the North American species of storm-petrels in the genus Oceanodroma have been moved to the genus Hydrobates. Here are the ones that occur commonly in waters off the United States and Canada:

Several warblers that used to be classified in the genus Vermivora were moved to Oreothlypis in 2010, and now most of those are being transferred again:

A peek across the hemisphere and the horizon.

This year there were several changes affecting Mexican and Central American birds.

The work of the Checklist Committee covers all of North America, down to the leading edge of South America. This year there were several changes affecting Mexican and Central American birds. The Orange-bellied Trogon of Costa Rica and Panama is one; it looks just like the widespread Collared Trogon, except that its belly is orange instead of red. It sounds the same, too, and voice is thought to be important for species recognition in trogons—so it’s no surprise that it’s now being lumped with the more prevalent species. On the other hand, the White-lored Gnatcatcher of Mexico and Central America has an isolated population in the Yucatan Peninsula with a different voice. DNA studies confirm that it’s distinct, so it’s now classified as a separate species: Yucatan Gnatcatcher.

Some other kinds of changes may be just over the horizon. This year the committee considered an intriguing proposal to change the English name of McCown’s Longspur because of legitimate concerns about John P. McCown and his role in the Confederacy and other points of American history. The proposal didn’t pass, but it has opened up a new line of discussion that may have far-reaching consequences. Stay tuned for more on this topic.