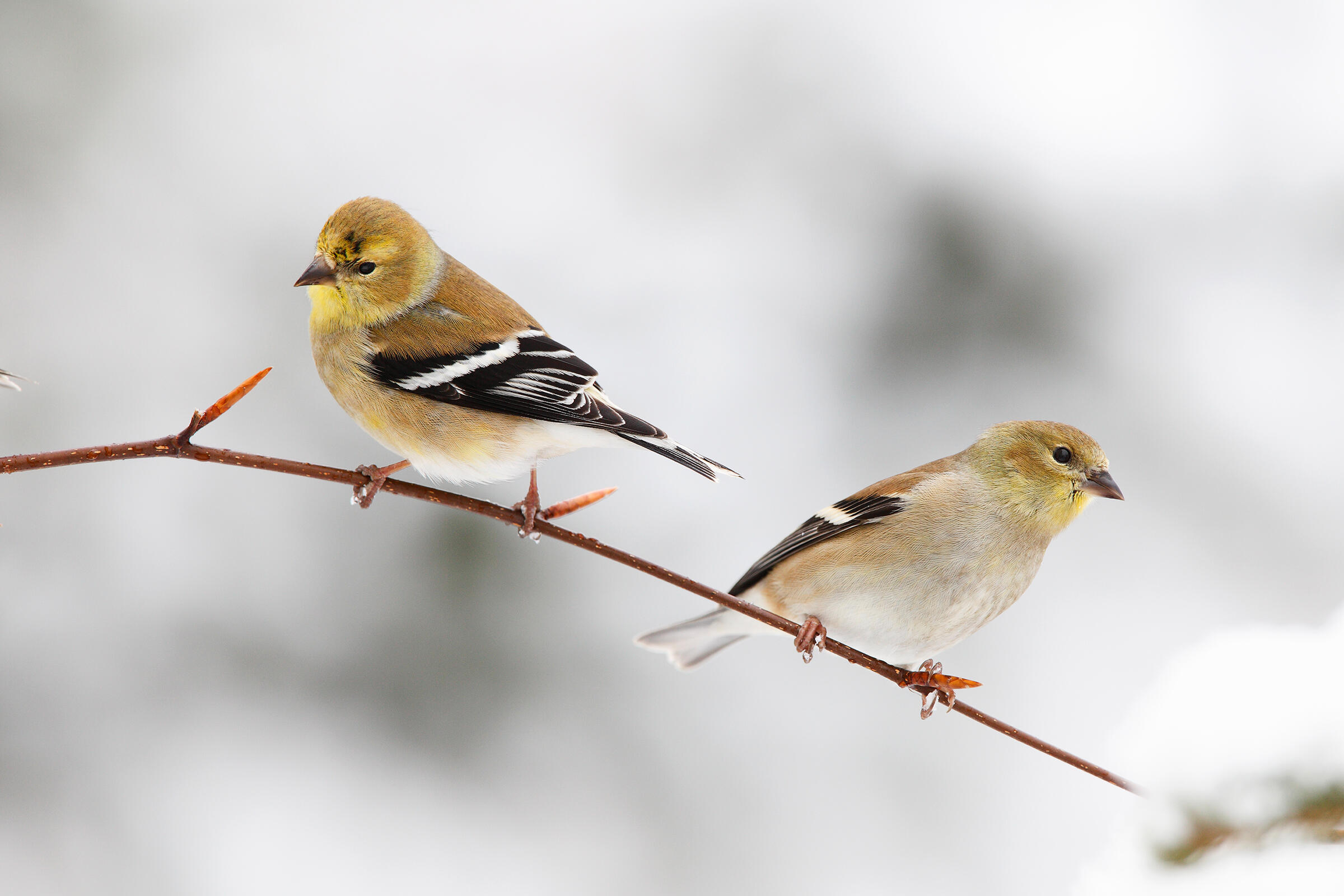 If there’s one thing you need to know about seasonal feathers, it’s this: Birds in spring are dressed to kill, while birds in fall are dressed to chill.

During breeding season, birds employ all manner of seduction on potential mates, including beautiful songs, choreographed displays, and bright, crisp feathers. Like a fancy tuxedo on prom night or a few sessions in the tanning bed, many male birds put on their nicest duds each spring to impress.

Once breeding season is over, though, it’s back to sweatpants and stained T-shirts. Metaphorically. When there’s no need to attract a mate any longer, male birds shed their risqué plumage; it’s physically taxing to produce showy feathers, and bright colors attract predators and unwanted rivals. This is why migratory species like Scarlet Tanagers, Indigo Buntings, and some shorebirds and warblers look different when they’re traveling south versus north.

Species that move short distances—or not at all—might switch into muted patterns as well. But that doesn’t mean you can get out of IDing them. You need to prepare for their tricky disguises, and I'd like to help.

Here are five year-round birds to start with.

The American Goldfinch undergoes such a radical transformation between seasons, it’s hard to believe that the gray-green birds of winter and the yellow-and-black birds of summer belong to the same species.

If you’ve got American Goldfinches coming regularly to your feeder, September and October is the time to watch the transition from gold to gray. In this span you should see male goldfinches in half-dress, with some bright yellow feathers and some dull gray.

Individuals with no holdover yellow can still be identified by the wings. All drab-bodied American Goldfinches still have mostly black wings with a thick, buffy bar and white edging on the flight feathers.

Yes, it’s a migrant warbler, but Yellow-rumps are fairly common in winter in the southern United States and on both coasts—if you can recognize them, that is.

A breeding-plumage Yellow-rump is an underrated beauty with rich blue, black, white, and buttery coloring—a welcome sight for winter-weary birders.

Most of those colors are gone by the latter half of the year, however, and the warbler gets much more difficult to identify. The blues and blacks are replaced by dingy brown backs and a streaky breast, and at a glance the species appears to be just another sparrow. But that namesake yellow rump and some sunnier side patches are key clues in fall and winter. Wait for a bird to turn around or fly away from you to get a good look at its gleaming keister and underwing patches (which always remind me of armpit stains, sorry for the visual), and you know you’re looking at a non-breeding member of the species.

Loons are a summer phenomenon for most people; their haunting calls and M.C. Escher-like plumage prompt memories of swimming and fishing in wooded lakes. But they need somewhere to fly south to, and it’s probably not as far as you think.

In fact, Common Loons can be found in winter throughout the Eastern and Southern states and along the West Coast. They just look a lot different. Gone is the jet-black head, the patterned necklace, and the checkerboard feathers on the back, and in their place is a nondescript gray-brown and white dress.

So, how do you know you’ve got a Common Loon? First you need to make sure you’re not looking at a duck, which might also be out on the open water in winter. The best help there is the loon’s bill, which remains a huge pointy hunk of silver. Few other birds on the water have pointy bills—except for more colorful mergansers and grebes—and none of them sport silver ones.

Second, you need to make sure you’re looking at a Common Loon and not another possible loon species. Red-throated and, on the West Coast, Pacific Loons also winter near Common Loons, as well as rarer Yellow-billed and Arctic Loons. The yellow bill of the Yellow-billed Loon gives it away, and the other species are all daintier. The Common Loon has a big blocky head and a beefier body than any of its cousins. (And as you may have guessed, it’s usually more common.)

This underrated sparrow is surprisingly distinctive, with its sharp red, white, and black head. Its breeding range extends across the United States and Canada, but in winter it can be found mainly in the Southern states.

Winter is also when the head pattern fades away, leaving Chippers looking much less distinctive and very “generic sparrow-y.”  As with all sparrow identification, it’s best to take it slow and look at details. The non-breeding crown is rusty brown instead of bright red. The eyebrow stripe is buff-colored instead of stark white, and the thin eye stripe still runs from the bill to the back of the head, though now it's brown, not black. Focus on the arrangement of varying feathers rather than the colors themselves to help separate from other Little Brown Jobs like the Clay-colored Sparrow, which has a pale area in front of the eye and strong hints of a moustache.

Identifying birds in their “sweatpants” plumage may not seem as exciting as picking them out in their “prom” plumage, but this period of stasis gives important insight into life cycles and avian behavior. Thankfully, while birding, you can wear whatever you want.

A male Mallard in breeding plumage is one of the most recognizable species in North America. But, of course, that dazzling emerald dome is just temporary.

There’s another twist, though. Many waterfowl undergo a midsummer molt just after breeding. This includes shedding and regrowing their flight feathers, so there’s a period when ducks are flightless and therefore more vulnerable to predators. To make themselves stand out less, male ducks will simultaneously lose some of their glam breeding costume and adopt a more female-like shade. This is called an eclipse plumage, and it may last anywhere from just a few weeks to many months.

In male Mallards, eclipse-ing means the iconic green head softens to a dingy gray or brown between June and September. During the molt they keep an intermediate plumage, with a few green feathers still visible, though scruffy-looking. By October the males should be back in their classic plumage.

Other overwintering ducks transition into eclipse plumage, too, including Wood Ducks, Blue-winged and Green-winged Teals, Northern Pintails, and Northern Shovelers. The timing on the return to breeding plumage varies, so between June and November keep a close eye on any groups that look to be all female.

How to Identify Birds

Before you judge a bird by its color, use these eight clues to guide you.