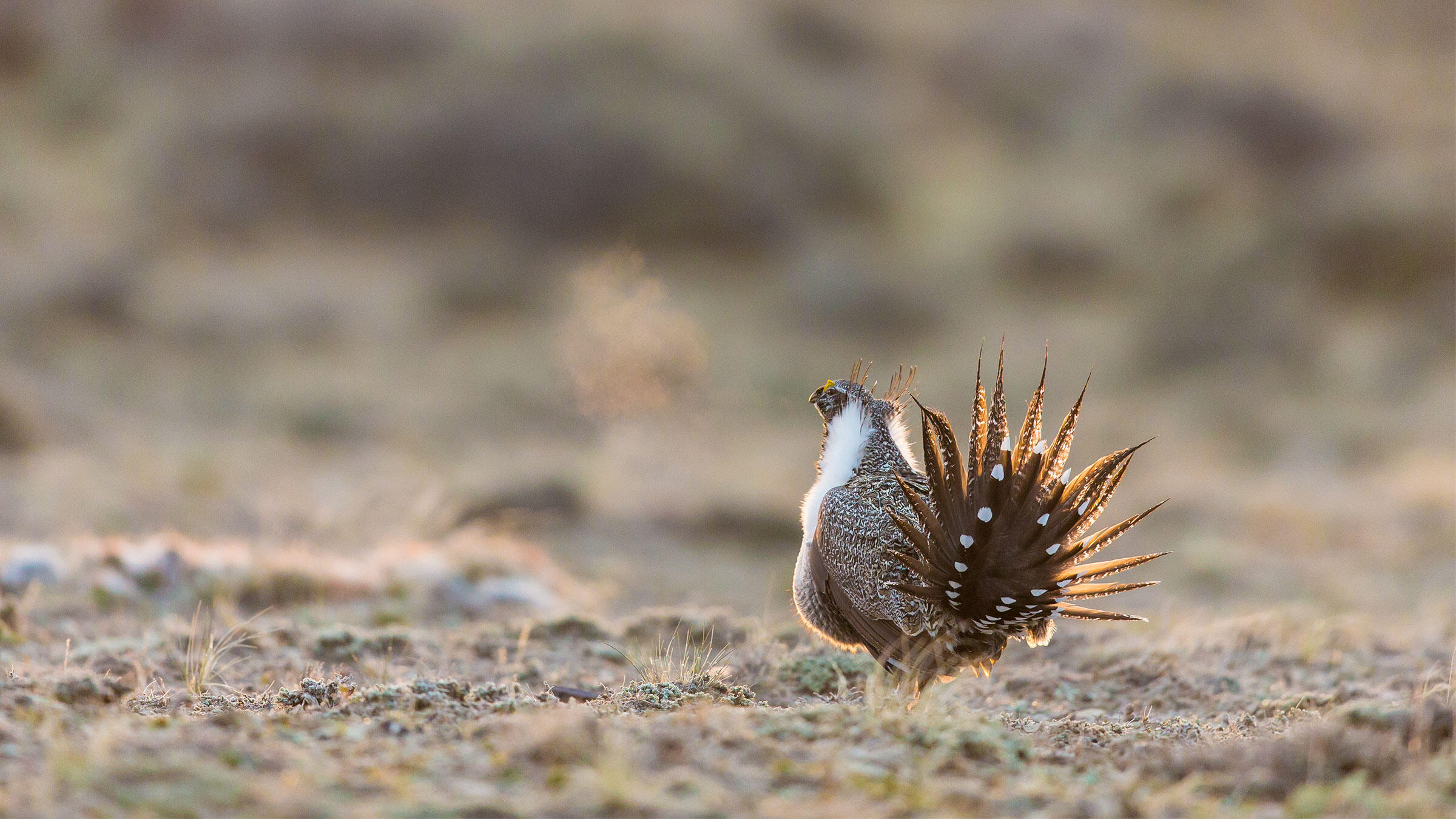 Sweeping land-use plans kept the Greater Sage-Grouse off the endangered species list. What happens if the Trump administration rolls them back?

Pat O’Toole first met the Greater Sage-Grouse in a surprise encounter 45 years ago. At dawn, the Wyoming rancher was moving some lambs when he came upon dozens of the flamboyant birds strutting and preening. He’d stumbled across a lek, the birds’ breeding grounds. “I didn’t know what it was,” he recalls. He watched the males’ whimsical attempts to woo mates—puffing out their chests, inflating the yellow air sacs, and deflating them with loud popping sounds.

“It was pretty magnificent,” O’Toole says. “Back then, I had no idea this bird was going to turn out to be such a big deal.”

O’Toole is one of more than 1,100 ranchers who stepped up to keep the chubby, chicken-size bird from being listed under the Endangered Species Act—a designation that would restrict everything from energy development to livestock grazing across its 173-million-acre range. He implemented grouse-friendly practices, such as creating mosaics of sagebrush, forbs, and grasses, in exchange for guarantees that he won’t have to jump through additional hoops should the bird ever be listed. Across the West, ranchers and industry representatives have teamed up with conservationists, politicians, and state and federal agencies to restore sagebrush habitat. So far, they’ve removed invasive conifers on more than 400,000 acres, replanted native flora on 48,000-plus acres, and adopted bird-friendly grazing practices on 2.5 million acres. The collaboration resulted in the development of new federal sage-grouse management plans in 2015—the largest conservation blueprint in history—and staved off a listing.

A year and change later, O’Toole says there are signs of “consternation” on the ground about some of the regulations and how they’ll be implemented; some in the livestock industry have bristled against specific grass height rules as unrealistic, for instance, and some energy developers contend that certain off-limits sites should remain accessible. But O’Toole thinks the landscape-scale approach—which protects 90 percent of the bird’s breeding habitat while leaving the majority of acres open to development—is still worth a shot.

The Trump administration, meanwhile, seems to be teeing up to roll back the plans before they’re fully implemented. The first attempted assault came last week, with the Bureau of Land Management's proposed 2018 fiscal budget calling for slashing $11.5 million from sage-grouse conservation funding. The cut represents a 17 percent decrease in federal dollars allotted to protect the iconic bird in the next fiscal year, which begins October 1; the omnibus spending package Congress approved earlier this month earmarked $68.9 million. (Last year sage-grouse funding received $89.7 million.) Fewer dollars means fewer efforts on the ground to safeguard sagebrush habitat, such as beating back invasive cheatgrass. So far, though, the Bureau of Land Management (BLM) hasn’t specified which aspects of grouse conservation it will cut.

“It’s a clear indication that the commitment made by all parties to invest in this long overlooked and underfunded place is in danger,” says Sarah Greenberger, Audubon’s vice president for conservation policy and a top advisor to former Interior Secretary Sally Jewell on developing the plans.

The proposed cut comes after months of hints that the plans to protect the iconic bird were in the crosshairs. Vice President Pence has reportedly been focusing on “stripping protections for the sage grouse to ease development of lands in the West,” according to The New York Times. Interior Secretary Ryan Zinke has been a vocal critic of the plans, calling instead for “state-driven solutions” that won’t hinder natural resource development. In late March he told members of the Public Lands Council: “You'll be happy with the changes that are going to come on sage grouse,” E&E News reports. “We need to manage on numbers, not on habitat.”

Exactly how the administration might go about changing the blueprints is unknown. “Nothing to announce at the moment,” Interior department press officer Heather Swift told Audubon.

Yet Zinke’s comments suggest a major shift. The current plans reduce or ban new disturbances such as mining or oil and gas development on 67 million acres that states and federal biologists identified as priority grouse habitat. (Sage-grouse evolved in the vast, low-vegetation sagebrush steppe; they’re spooked by anthropogenic noise and tall structures, and have a tendency to fly into fences.)

Managing by population counts is tricky and risky, conservationists say, because the species goes through natural boom and bust cycles. “If we go from a low of, say, 100,000, to a high of 650,000, so we manage for 350,000, you can never get to that population high again, and the numbers will just decline,” says Brian Rutledge, VP and Central Flyway policy advisor for Audubon. Rutledge and his team helped create the science-based approach that significantly reduces disturbance in core grouse habitat, which was incorporated into state and federal plans. “We’re not opposed to using numbers,” he says, “we’re opposed to using numbers as the deciding factors.”

Growing pains are to be expected as the plans are implemented, says Audubon’s Greenberger. “I’m sure the administration is hearing from states that are supportive of the plans, but want real engagement from the Interior Department to make sure they have the flexibility to make them work,” she says. “If there are changes, they need to be scientifically rigorous, and have the same goals of achieving sustainable economic development and conservation of sage-grouse.” Otherwise, she says, “we’re going to be right back where we started,” with the bird likely needing to be listed and endless litigation.

Trump can’t simply chuck the plans, which consolidated 98 distinct BLM and Forest Service land-use plans into 14. “If they want to disassemble them, they’re going to have to reverse engineer them,” says Pat Parenteau, senior counsel at the University of Vermont’s Environmental and Natural Resources Law Clinic, noting the extensive studies, analyses, and public input that went into crafting the blueprints. “It took years to develop those, and it would probably take years to undo them. That’s because if you’re going to do it right, do it lawfully, you have to step back through the entire planning process, and do it in a transparent way for the public to weigh in.”

Slashing grouse conservation funding is just one way to hamper implementation of the plans. The White House could also instruct the Department of Justice to stop defending existing lawsuits against the plans—though Parenteau notes that groups that joined the court cases to oppose the legal attacks could still argue the plans comply with the law. Audubon and the Wilderness Society, for instance, have intervened on the side of the federal government in a series of cases brought by individual states and private companies and associations that contend that the BLM and Forest Service violated a host of federal laws and regulations and exceeded their authority when they implemented the large landscape-scale blueprints. “Audubon is willing to defend the plans and the habitat approach,” Greenberger says.

The plans are also a Congressional target. In January Rep. Rob Bishop (R-UT), chairman of the House Committee on Natural Resources, introduced a bill, H.R. 527, that would essentially turn grouse management over to the states; it would allow governors to ignore anything in the federal plans that doesn’t conform to state-approved grouse management policies. Sen. Jim Risch (R-ID) filed a sister bill, S. 273, in the Senate in February. So far, neither bill has made it out of committee.

For his part, O’Toole, the rancher, isn’t focused on politics, but on “showing that production of protein can coexist with sage-grouse and other wildlife.” He continues to rise early to tend to chores, and this time of year he still gets a thrill from visiting the leks that are thriving on his land. In those early morning hours, he says, it’s not just the “popping of the grouse” that he appreciates, but also the dawn chorus of sagebrush-dependent songbirds and the tremendous numbers of mule deer moving across the landscape. “Biodiversity,” he says, “is the key.”

You can help! Audubon is a non-profit that uses science-based conservation strategies to help save birds and the places they need. Support our work by making a donation today.