Just west of the Hawaiian Islands sits one of the largest marine protected areas in the world. In August, President Obama tripled the size of Papahānaumokuākea Marine National Monument, which now stretches across 582,578 square miles of ocean, an area nearly four times the size of California. The monument is home to colorful coral reefs teeming with marine life and encompasses rocky outcrops where some 5.5 million birds, including the Laysan Duck and Short-tailed Albatross, breed every year.

More than 5,000 miles east of the warm Pacific waters of Hawaii, in the frigid northern Atlantic Ocean, sits the 4,913-square-mile Northeast Canyons and Seamounts Marine National Monument, which Obama designated in September. There, 130 miles off the coast of Massachusetts, underwater ravines deeper than the Grand Canyon contain cold-water coral reefs, among the world’s most delicate ecosystems, and the water’s surface serves as the winter home of Maine’s Atlantic Puffins.

The monuments are major victories for environmentalists—with a swipe of his pen, the President banned all commercial fishing within the monuments’ boundaries and outlawed all gas and oil exploration. Protecting marine life in both oceans will ultimately support fisheries and provide refuge for wildlife adapting to a changing climate.

But it’s one thing to designate a monument, and it's quite another to actually enforce the promised protections. The two new monuments are vast and remote, and authorities already struggle to detect illegal activity in marine protected areas that are smaller and closer to land. In 1997 and 2004, nets and other commercial fishing gear were uncovered in the Monitor National Marine Sanctuary off the coast of North Carolina. Even worse, evidence of fishing with explosives, bleach, and even cyanide has been found in the National Marine Sanctuary of American Samoa.

That the new monuments are so large and located in such distant waters presents an even bigger challenge for the federal agencies responsible for their monitoring. Ideally, crewed vessels would police the areas, says Lisa Symons, resource protection coordinator at the National Oceanic and Atmospheric Administration (NOAA) Office of National Marine Sanctuaries. A physical presence would deter illegal fishing or mining and allow authorities to arrest or capture violating vessels. But this is almost impossible considering the locations of the new monuments—offshore and hundreds of miles from cities, towns, or villages.

NOAA and the Coast Guard have turned to a bevy of remote-sensing technologies—some old, some new—to better serve marine protected areas. Their main tool is the Automatic Identification System (AIS), a transceiver required by the Coast Guard for all ships carrying large cargo (over 300 gross tons) and all passenger vessels. AIS consists of Very High Frequency (VHF) transmitters and receivers that link to a ship’s display and sensor systems, along with GPS transmitters that provide information such as ship location, course, and speed. The transceiver transmits data every couple of minutes while a ship is anchored, and every few seconds when it’s traveling. The data is then analyzed by computers and shared with other ships and shore stations to track boat activity and prevent collisions. 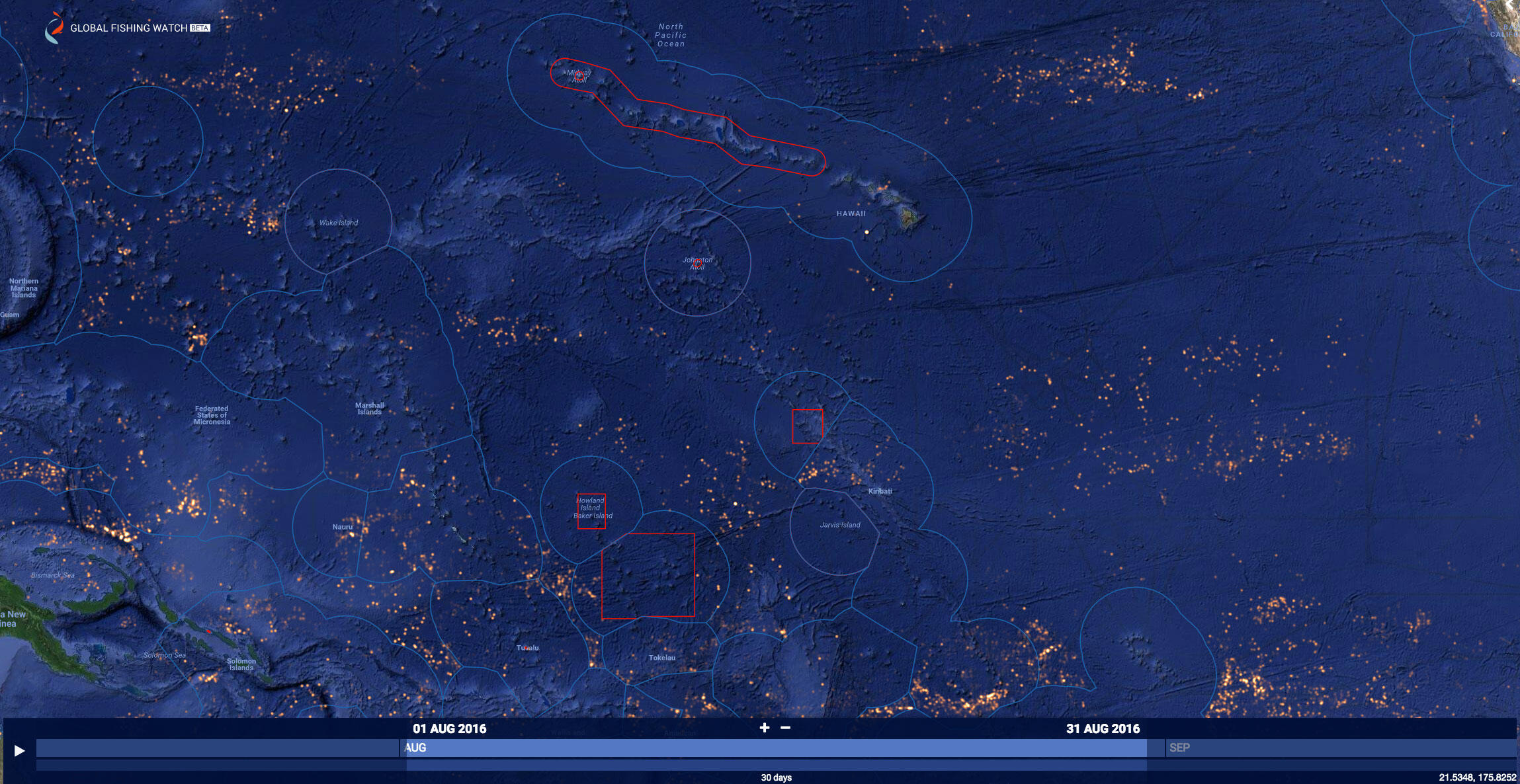 A free new tool provided by Global Fishing Watch allows anyone to check the location and paths of certain AIS-tracked vessels, represented by the bright dots. The red squares denote ocean areas protected by the Pacific Remote Island Marine National Monument, and the finger-like red region at the top of the map shows Hawaii's Papahānaumokuākea Marine National Monument before it was expanded. Map: Global Fishing Watch (Oceana, SkyTruth, Google).

About 10 years ago, authorities started using satellites to pick up VHF signals from space, and now a number of low-orbiting satellites are fitted with AIS receivers, allowing the Coast Guard to monitor fishing fleets in distant waters. More recently, anyone can track these same vessels from their computer using an online tool created by Oceana, SkyTruth, and Google called Global Fishing Watch, which creates real-time maps with AIS satellite data. “Citizens all over the world can use Global Fishing Watch to help monitor and identify suspicious fishing activity in marine protected areas and marine national monuments like Papahānaumokuākea,” says Jacqueline Savitz, a vice president at Oceana who heads up Global Fishing Watch.

Satellite AIS is a valuable tool, but it also has its drawbacks. Analyzing the onslaught of data points can be a daunting task. For example, during a single 24-hour window, Global Fishing Watch monitored 127,000 ships, with data refreshing every few seconds. The challenge for agencies is breaking down that constant stream of analytics into what Symons calls “actionable information” that points to illicit activity. For instance, a ship venturing into a protected area and dropping its anchor is probably fishing illegally. But AIS can also be completely turned off, which means that a ship can essentially go dark. When it comes back online the gap in data is obvious, but by then it might be too late.

Those aren't the only issues with AIS. Jam-packed ports or bustling fisheries can cause signals to cross and compete with one another. And seafarers can input another vessel’s identification numbers to mask their activities and trick fishery enforcement agencies.

With such simple ways to circumvent AIS monitoring systems, NOAA and other agencies are looking at more reliable methods to monitor the entire ocean beyond protected areas. These include a variety of unmanned air, surface, and underwater vehicles to better patrol the oceans and monitor illegal fishing. Perhaps showing the most promise have been autonomous sailboats, also known as Saildrones, which cruise ocean waters loaded with radar technology, hydrophones, cameras, and other equipment that can be controlled with a cellphone or tablet.

The main purpose of these devices is scientific data collection, and to that end they have already been deployed in marine protected areas. The vehicles have been used to track endangered shark populations in Palmyra Atoll off the Hawaiian coast and monitor fish stocks in the Bering Sea. The hope is that in the future they will be able to monitor and track fishing vessels, with their mere presence detering illegal activity.

Until then, our new monuments and their fragile ecosystems, so far away and so isolated, will largely rely on that most basic of human principles for protection—the honor system.

Located off the coast of Cape Cod, the area will be called the Northeast Canyons and Seamounts Marine National Monument and is home to a variety of oceanic wildlife, including overwintering Atlantic Puffins.

How to Protect Seabirds From Fishing Threats

A new study shows that seabird populations have crashed by 70 percent. Here are five innovations that might help slow the trend.