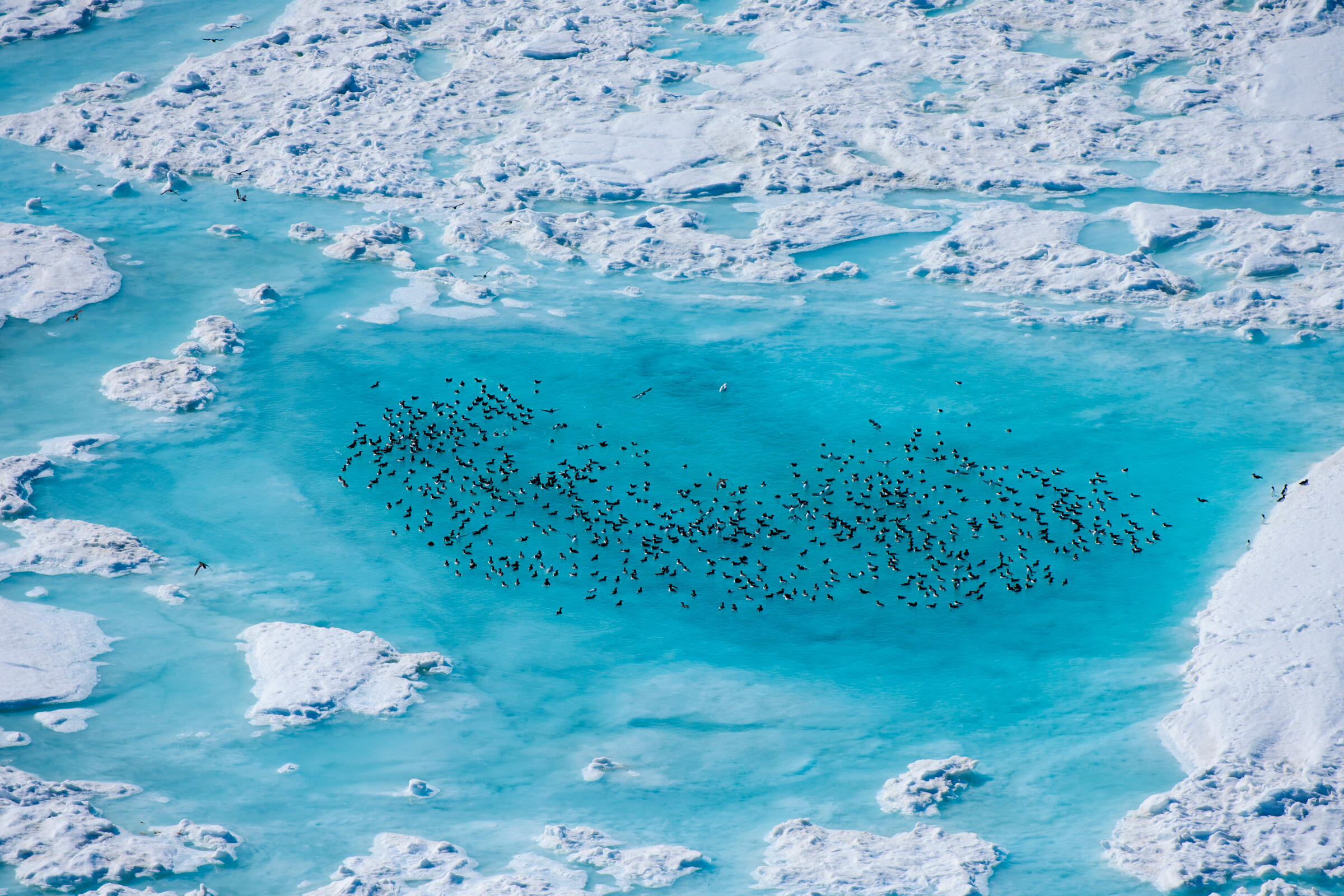 Murres swim in a pool of freshwater atop sea ice in the Chukchi. Photo: Florian Schulz/visionsofthewild.com

“Disappointing” results in the Chukchi Sea spur the oil and gas company to shelve exploration activity.

In its pursuit of drilling for oil in the Arctic, Royal Dutch Shell has endured numerous lawsuits, intense public backlash, dangerous equipment mishaps, and even protests to block its ships. But when Shell announced today that it would halt its Alaska offshore exploration campaign “for the foreseeable future,” it was for a different reason altogether: The company found too little oil and gas to make the enormously expensive endeavor worthwhile.

“This decision reflects both the Burger J well result, the high costs associated with the project, and the challenging and unpredictable federal regulatory environment in offshore Alaska,” a statement on the company’s website read.

Shell has invested more than $7 billion in seven years of exploring the area, which was thought to have more than 4 billion barrels of oil. The realization that the oil and gas reserves may be less extensive than previously thought, coupled with the low price of oil (less than $50 a barrel) and the high costs of extracting oil in the precarious conditions of the Chukchi Sea likely convinced the company that it was not a financially viable path forward, says Stan Senner, Audubon’s Vice President for Bird Conservation in the Pacific Flyway. Shell will cap the exploration well and leave the area, the company wrote in its statement.

“If oil were more than $100 a barrel, they might have reached a different answer,” Senner says.

While the decision was likely largely a financial calculation, the immense backlash—both from the public and environmental groups including Audubon—may have been a factor, says Nils Warnock, Executive Director of Audubon Alaska. “We make it harder for them—we demand that the regulations be super tight, and we force the issue that this is an unpredictable, unforgivable place,” he says.

The likelihood of a major oil spill over the lifespan of the lease track is 75 percent, according to an environmental impact statement compiled by the Bureau of Ocean Energy Management in February of 2015. Shell had already abandoned drilling in 2012 after two of its ships suffered crippling accidents trying to navigate the area. The move to drill in the risky area, where cleanup of such a spill would be complicated to say the least—and pose risks to numerous species of wildlife, including four species of eider, Common and Thick-Billed murres, Shearwaters, and Long-tailed Ducks, as well as polar bears, walruses, and other marine mammals—rallied protests in Alaska and farther south, in Seattle, where Shell’s ships were set to dock.

Furthermore, over the last seven years, Audubon and other groups brought a series of lawsuits against Shell in the leadup to the exploratory drilling—one challenging the sale of the lease itself, another challenging the exploration plan, and a third contesting the legality of the company’s oil spill response plan. While none of these suits has put a permanent stop to the drilling yet, the ongoing litigation had delayed Shell’s ability to explore the area until this summer, and could have delayed them again. In fact, Shell was so perturbed by the idea of litigation over its spill response plan impeding its ability to drill in 2011 that it turned around and sued Audubon and colleague groups to expedite matters (that ploy was shut down on appeal).

“I think Shell has been surprised by the level of opposition to what they’re doing,” Senner says. “I think they’re feeling like they’re getting something of a black eye over this.”

Both Warnock and Senner acknowledged that as a publicly traded corporation, Shell’s responsibility is to their shareholders. “They’re there to make a profit,” Warnock said.

In light of Shell’s decision, other smaller companies lining up to drill in the area are also likely to hold off on exploration, following the larger company’s lead, Senner said. Shell will retain the rights to drill through the lease’s expiration date (set for 2020), but in order to renew the lease, the company will have to show that they are still actively exploring drilling at that time.

Even as Shell pulls out, the Obama administration is considering the future of drilling in the area. Shell’s indefinite pause could affect the administration’s decision whether to hold additional oil and gas lease sales in the Arctic outer continental shelf. The company’s retreat could bolster the White House to yank the sales included in its draft 2017-2022 leasing plan for area, Senner says. “If Shell had come up with just dynamite results from their drilling—if it were going like gangbusters—that would make it tougher to pull back,” Senner says. As is, environmental organizations, including Audubon, can use Shell’s withdrawal as ammunition to protect this fragile ecosystem from further disruption.

“I don’t think this is the end of the war,” Senner says, “but this is a big battle that we won.”