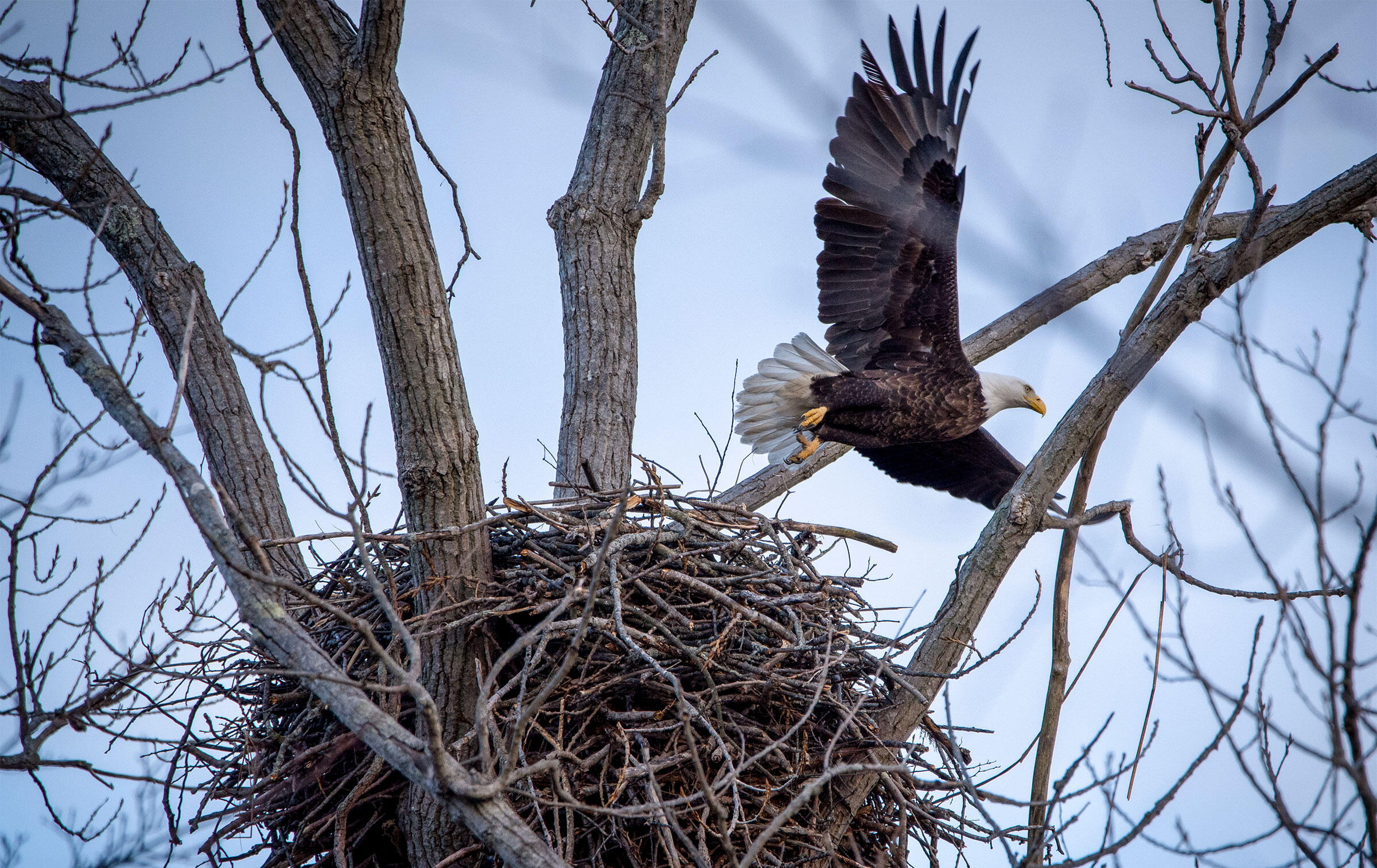 These Early Nesters Get a Head Start on Breeding Season

Not every bird species waits for spring to lay eggs and raise chicks.

There’s a good reason most North American birds nest in late spring or early summer: The weather and water are warmer, prey abounds, and insects and fruits are plentiful enough for rearing hungry chicks. But not all species adhere to this schedule. Some get a head start on parenthood by laying eggs before the arrival of spring—sometimes as early as fall.

These early nesters might be motivated by a variety of reasons. In some cases, they may be able to take advantage of food sources and environmental factors during colder months. And in other cases, as with some raptors, chicks often need more time to develop their hunting skills. Egg-laying times also tend to vary by location for most widespread North American bird species. Lower latitudes often have warmer winters, allowing southern populations to lay earlier than their northern counterparts.

Below are five bird species that have bucked the trend by rearing chicks in winter and late fall.

Each January, the forests outside Denver Holt’s house in Mission Valley, Montana, come alive with the mating calls of Great Horned Owls. Holt is the founder and lead researcher of the Owl Research Institute and has been studying owls for more than 30 years. For him, the duets of hoots arrive like clockwork as the birds of prey prepare to nest. “From mid-February to early March is when the Great Horned Owls really get started laying their eggs,” Holt says.

Great Horned Owls nest earlier than any other North American owl species, and they aren't exactly picky about where they raise their family. These big owls have been observed nesting in tree cavities, cliffs, abandoned buildings, old eagle nests, and even on the ground.

One of the largest owls in North America, Great Horned Owls breed early to give their chicks more time to develop, with the young sticking close to the nest until around seven weeks old. This timing ensures the owlets fledge in early spring, when an abundance of young rodents and other prey provide them with opportunities to hone their hunting skills. By the time they’re adults, they must have the skills to take down a variety of prey, from earthworms and insects to large waterfowl like herons and geese.

After fledging, immature owls remain with their parents through the summer as they continue to practice their hunting skills, with some still begging their parents for food into November. “It's a long, long breeding season,” Holt says.

Starting a family when snow is still on the ground is no easy task. Female Great Horned Owls stay with their brood until the young are able to regulate their own body temperatures. Her feathers provide cozy insulation while a bare patch of skin rich in blood vessels, called a “brood patch,” keeps the chicks warm. During this time, the male is the sole food provider for mom and the nestlings. He’ll mostly rely on rodents and small mammals, opportunistically feeding on any other prey that is readily available.

This flexible diet combined with their willingness to nest pretty much anywhere make the Great Horned Owl one of North America’s most widespread and resilient birds, ranging from the frigid Arctic down through South America. “Within that distribution, every habitat you can think of, they occupy,” Holt says. “Great Horned Owls are a pretty adaptable species.”

Like Great Horned Owls, Bald Eagles begin nesting during the colder, late winter months to provide enough time to rear their chicks. From January to March, a large portion of the North American breeding population heads north to Alaska and Canada in search of waterways with a regular supply of fish and other food to feed fledglings.

Not all eagles make the trip, though. Some remain year-round residents of the Lower 48, nesting early as long as they have access to food during the colder months, when waters often freeze and fish supplies can be limited. But Bald Eagles in Florida, which has one of the largest populations outside of Alaska, don’t have any of those concerns. Pairs in the Sunshine State have been observed laying eggs as early as October—a whole five months before populations in the northern U.S. and Canada.

This earlier nesting period occurs during Florida’s dry season, a factor that Shawnlei Breeding, program director for the Audubon EagleWatch, says makes foraging easier for parent eagles. “In the winter, the water levels dry down,” she says. “And for a species that eats a lot of fish, it's easier to catch fish in shallow water.”

Breeding also believes that the huge numbers of waterfowl that migrate to Florida each winter provides an additional source of food for young eaglets. “Waterfowl like coots are a big part of the Bald Eagle diet,” Breeding says. “So there's an abundant food source here in the winter for them to feed their young.”

After deciding on a territory, Bald Eagle parents share nest-building and chick-rearing responsibilities. The raptors typically incubate their eggs for about 35 days. Once the eggs hatch, the hatchlings will take 10 to 14 weeks to fledge.

Even after their first flights, fully fledged Bald Eagles stick around the nest as adults continue to provide food until the young eventually leave. Out on their own, immature eagles will live a nomadic life for several years before finding a mate, with some Florida birds flying as far north as Canada during their first summer.

Since bald eagles mate for life, picking the right partner is crucial. Whether building their massive five-foot nests or fending off intruders, a good mate can make a big difference. “It takes a lot of time and energy to raise Bald Eagle chicks,” Breeding says. “So if you can find a mate that can help you defend your territory and provide food, you want to hold on to them.”

Ranging from the Rocky Mountains and parts of the Pacific Northwest up throughout Canada’s Boreal Forest, Canada Jay nesting times vary—and in surprising ways. In the Boreal, they actually begin nesting as early as February, a cold and unforgiving time of year. Why they choose to breed and nest in such harsh conditions is still somewhat of a mystery to scientists, but researchers believe the birds’ reliance on caching, or the storing of food for later, could play a role.

While other corvids like Blue Jays and Common Ravens supplement their diet with short-term caches, Canada Jays can depend solely on their stashes for up to eight months, according to avian ecologist Emily Williams, a PhD student at Georgetown University who previously worked as an avian ecologist with the Denali Canada Jay Project, a multi-year species monitoring program in Alaska’s Denali National Park.

“What makes Canada Jays unique is that they make these really long term caches meant to last a really long time,” she says. “And they're primarily made up of foods that can perish.”

Berries, carrion, mushrooms, insects—they’re all foods Canada Jays start storing in late summer and fall, hiding items behind flakes of tree bark, foliage, or any suitable cranny. Special glands produce a saliva that allows the birds to preserve the food at first, but once winter arrives, temperatures as low as -40 degrees Fahrenheit keep the food from spoiling. With a steady supply of meals at the ready, the birds are able to lay their eggs in late winter and sustain themselves and their chicks until spring arrives.

As with owls and eagles, Canada Jay chicks also tend to linger after they’ve fledged. Williams believes that this might allow the young birds to learn caching and other behaviors, but more research is needed. Canada Jays are cooperative breeders, so eventually one nestling chases off its siblings and stays behind to help rear the next brood. The benefit? They get to keep bumming off of the family caches. “They're kind of like that 30 year old kid that keeps staying with the parents,” Williams jokes.

The Canada Jays’ caching strategy may be in trouble, however. A 2019 study in Ontario’s Algonquin Provincial Park found that climate change could lead to caches thawing earlier, with multiple freeze-thaw events potentially spoiling food and possibly even leading to smaller clutches. Meanwhile, the team from the Denali Canada Jay Project recently published its findings on how global warming is impacting cached food in the northern part of the bird’s range. The four year study found that Canada Jays relied less on their caches and more on foraging for fresh food when temperatures reached a record high in March of 2019.

“This species has evolved this strategy to rely on caches for a long period of time, under scenarios of long, deep cold,” Williams says. “And that's all changing because of climate change.”

Up until now, the birds on this list stuck to some sense of a schedule when it came to nesting. Red Crossbills and White-winged Crossbills, though, are purely opportunistic breeders. Found in conifer forests throughout northern North America and some parts of the western United States, both crossbills will migrate beyond their usual range to find ripening cone crops. These nomadic finches are so reliant on conifer seeds, in fact, that they’ve even evolved twisted beaks perfect for retrieving seeds from their cones.

Most North American crossbill species will breed when conifers disperse their seeds in late summer through early fall, according to Craig Benkman, a crossbill expert who’s been studying the birds for 40 years. But the relatively unpredictable timing of conifer crops means that these finches are capable of breeding year-round. “There are records almost basically every month of the year where they have bred,” Benkman says. “But that doesn't mean the whole population is going to be breeding.”

Weather and the previous year’s cone crop can influence whether a certain population of crossbills nests during colder months. A combination of a large, or “bumper,” crop the year before and cool, moist weather in the summer and fall can cause a large amount of seeds to remain sealed in their cones until late winter. If there is enough food for breeding, the crossbills will mate and lay eggs despite the chill. Once the eggs hatch, the parents will continue to rely on this crop for themselves and as they feed their nestlings regurgitated seeds. “The female will sit tight on the eggs and sit tight with the nestlings after they hatch until they can thermoregulate,” Benkman says. “The male will feed them.”

Because crossbills are so dependent on conifer seeds, they’ll readily move on to a new cone crop if the current one runs dry. This can force any nesting pairs to abandon their homes. Benkman observed this exact scenario play out while studying the foraging habits of White-winged Crossbills in Algonquin Provincial Park, Ontario. As the crossbills were feeding on the seeds of white spruce cones, “they were building nests and singing, just carrying on,” he says. “It was minus 20 degrees out there.”

But the festivities were short lived. A warm spell caused the white spruce cones to release their seeds early—a major problem for the crossbills, who prefer to forage their seeds from the cones and not off the ground, Benkman says. At the drop of a hat, the birds deserted the area and any nests in progress in search of a new cone crop.