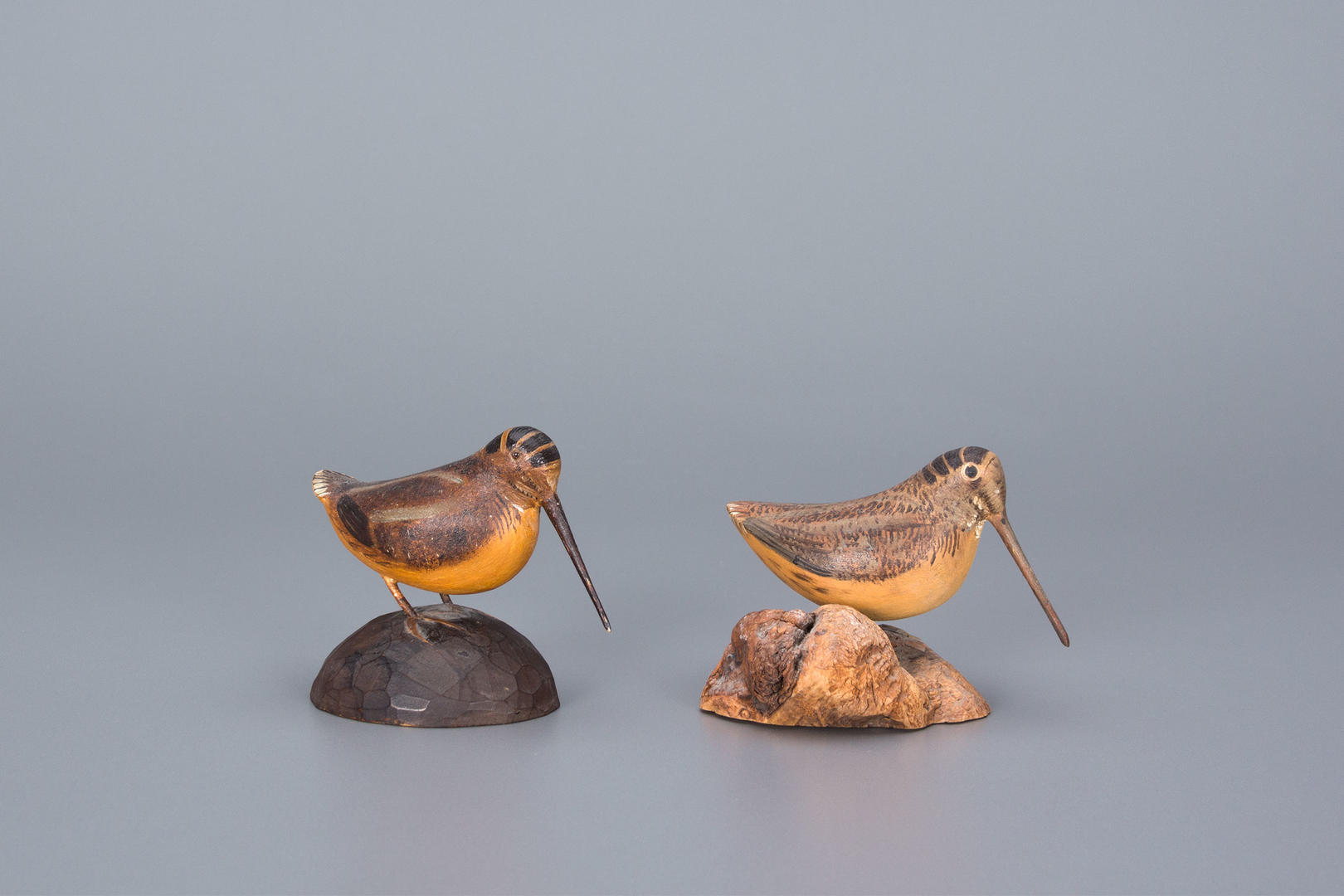 American Woodcocks are still hunted today across their range, but scientists think the pressure is sustainable. Their bigger concern for the species is loss of suitable habitat across the Eastern U.S. Photo: Copley Fine Art Auctions, LLC

Donal O’Brien was 10 years old when he collected his first decoy: a female broadbill pilfered from his grandfather’s hunting gear. As the decades passed, the Rockefeller lawyer accumulated an astonishing total of 2,000 wooden decoys, which he kept mostly in his Connecticut home, along with a curated collection of avian art. Later in life he taught himself to carve decoys by hand, joining the long-held American tradition that was commemorated through his collection.

But O’Brien’s legacy didn’t end with his stockpiles of artifacts and art: Before he died in 2013, the septuagenarian spent decades at the forefront of bird conservation. He steered the National Audubon Society as its chairman for 15 years, founded the international nonprofit BirdLife International, and raised millions of dollars for the Important Bird Areas program. But as much as he fought to keep birds safe in the wild, he also worked to bring their likenesses home. Now, others can share in that appreciation as well; at the end of next month, 150 carvings and paintings from O’Brien’s collection are being sold by Copley Fine Art Auctions.

Decoys date back centuries in America's hunting history, when it was discovered that manmade dummies could be used to coax birds into shooting range. The practice began with Native Americans, who wove reeds into the shapes of floating birds. By the 1800s, pioneers were setting out rafts of wooden replicas to attract entire flocks of ducks at once. But in the 1910s, a series of laws banned large, market-scale hunting and the interstate sales of birds it relied on, reducing the need for decoys. Nevertheless, they’re still used by sport hunters, but are typically made of plastic to be lightweight and more durable. 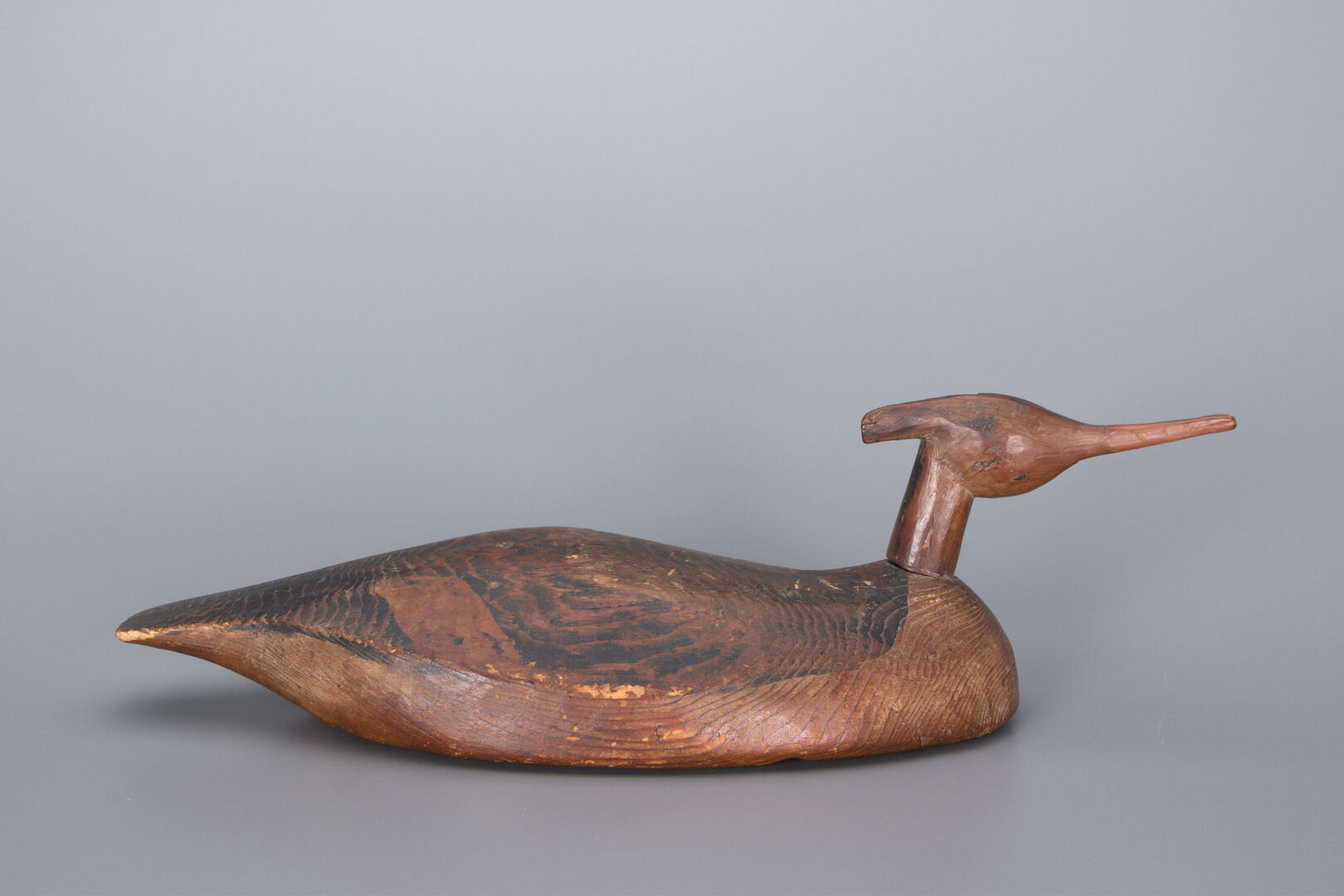 Typically, decoys are carved from just one block of wood. Not so with “root-head” decoys, like this merganser. This type of decoy is made by finding a root or stem that more or less matches the shape of the head of the bird being carved. Photo: Copley Fine Art Auctions, LLC 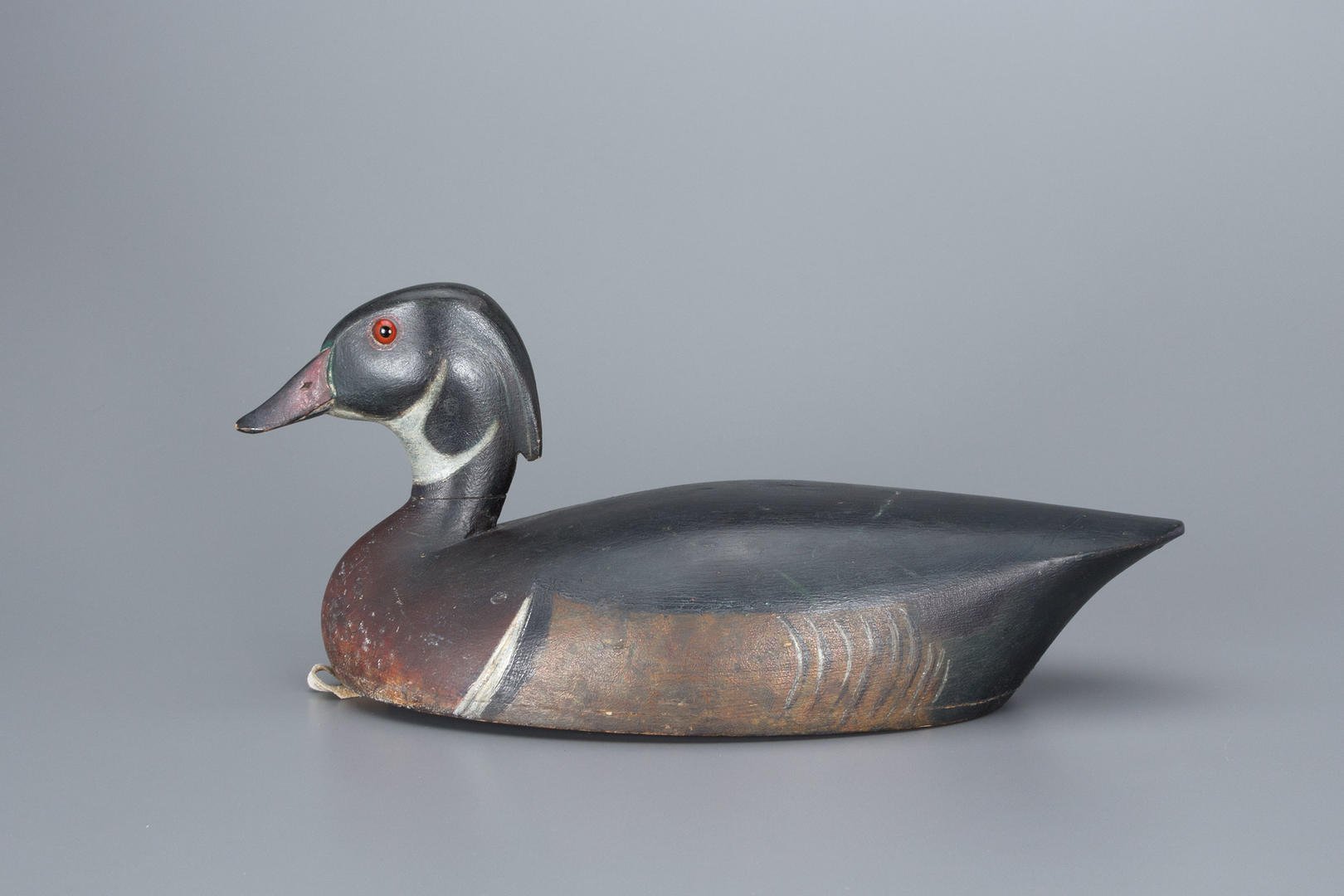 Wood Duck decoys are generally rare, Stephen says. “You don’t really need to make decoys to lure [them].” This is one of a pair of Wood Duck drakes made by Thomas Chambers, a well-known Canadian carver who died in 1948. Photo: Copley Fine Art Auctions, LLC 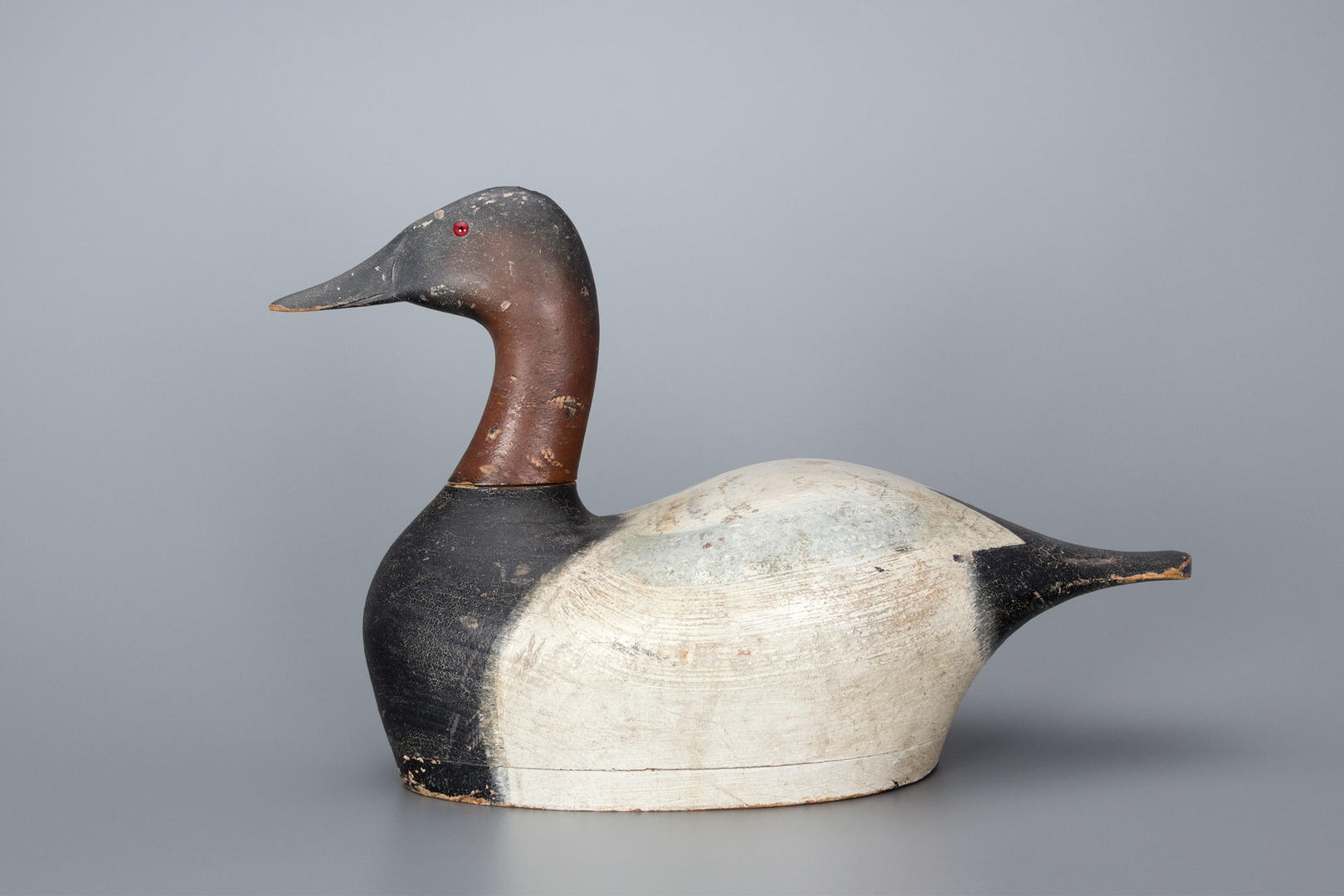 The Canvasback is the largest member of its genus, which also includes scaups, Ring-necked Ducks, and Tufted Ducks. It’s particularly fond of wild celery—and hunters are particularly fond of it thanks to the challenge it poses with its speed and cautious behavior. Photo: Copley Fine Art Auctions, LLC 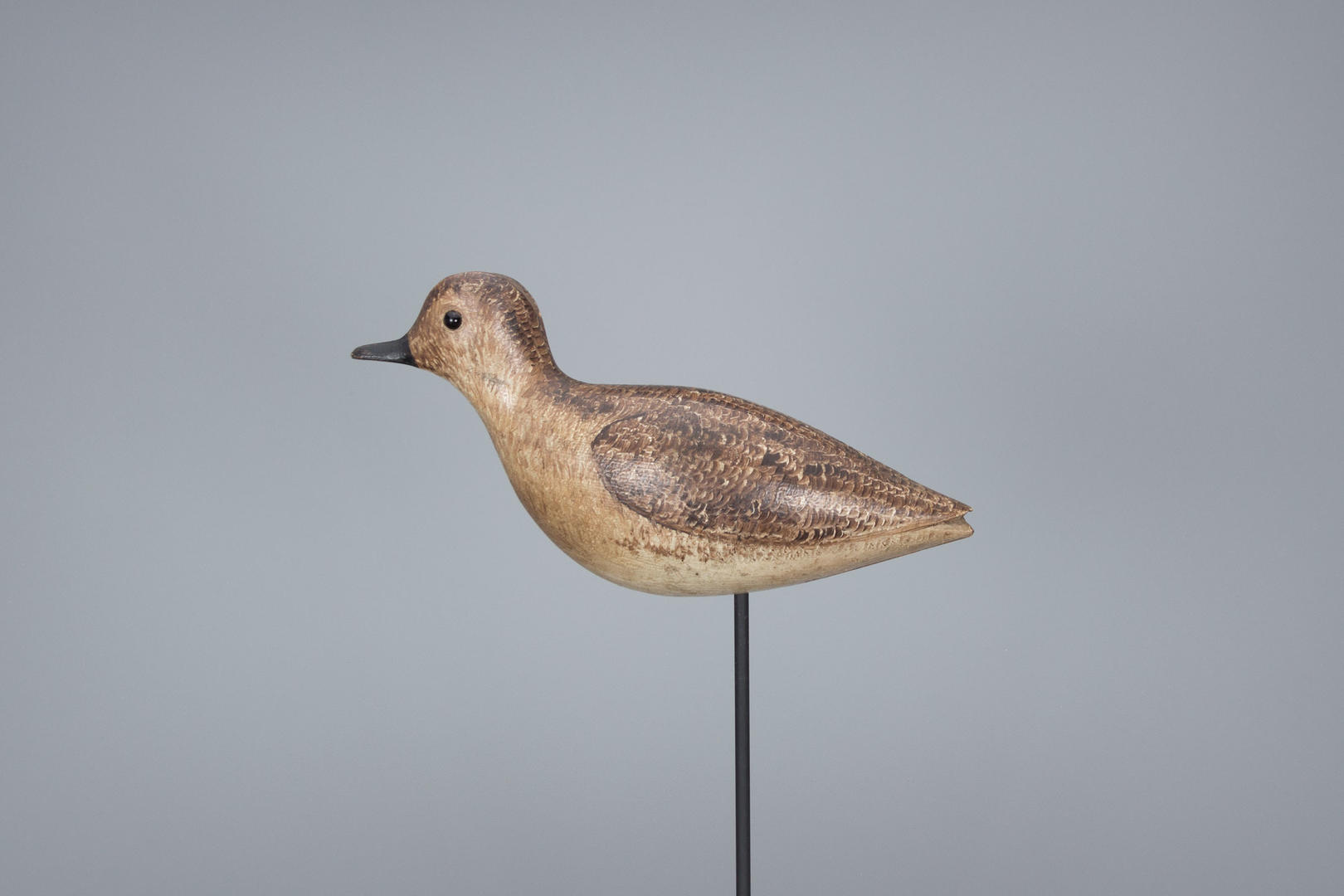 Small shorebirds such as this plover are often represented by generic decoys: The birds themselves aren’t very picky about what they come to investigate. Hunters would also play snipe whistles to help attract the birds. Photo: Copley Fine Art Auctions, LLC

Wooden birds haven’t completely disappeared, however: today, they’re considered works of art. Over time, they've become more lifelike, not only in how closely they resemble a bird, but also in how well they float. The best decoys are carved to sit head-up naturally, rather than relying on weights to stay upright in the water. Amateur decoy-carving contests have also become popular, sometimes attracting more than a thousand entries. Meanwhile, individual auctions for prized decoys have topped a million dollars.

O’Brien was amassing carvings in the 1950s and ’60s—the earliest days of the market. “Back when he started, it was really the formation of decoy collecting as we know it,” says Stephen O’Brien, Jr., the head of Copley Fine Art Auctions and Donal’s nephew. “He was buying rigs of decoys from the carvers themselves [and] from the families or heirs of carvers.”

But Stephen says his uncle was the last remaining collector from that generation. “It’s really the end of an era,” he says. (More information about the auction is available online.)

Nowadays, the craft has a different calling: conserving at-risk species around the world. Many seabirds, including puffins and albatross, don’t like nesting alone—so managers use decoys to seed new colonies, coaxing the birds into nesting around their statuesque neighbors. It’s just the sort of thing O’Brien would have appreciated: birds of wild feather and sculpted wood, flocking together.

Why Are Tropical Birds Popping Up All Over Brooklyn?

A Colombian artist brings her native species to the city to show how exotic climate change can get.