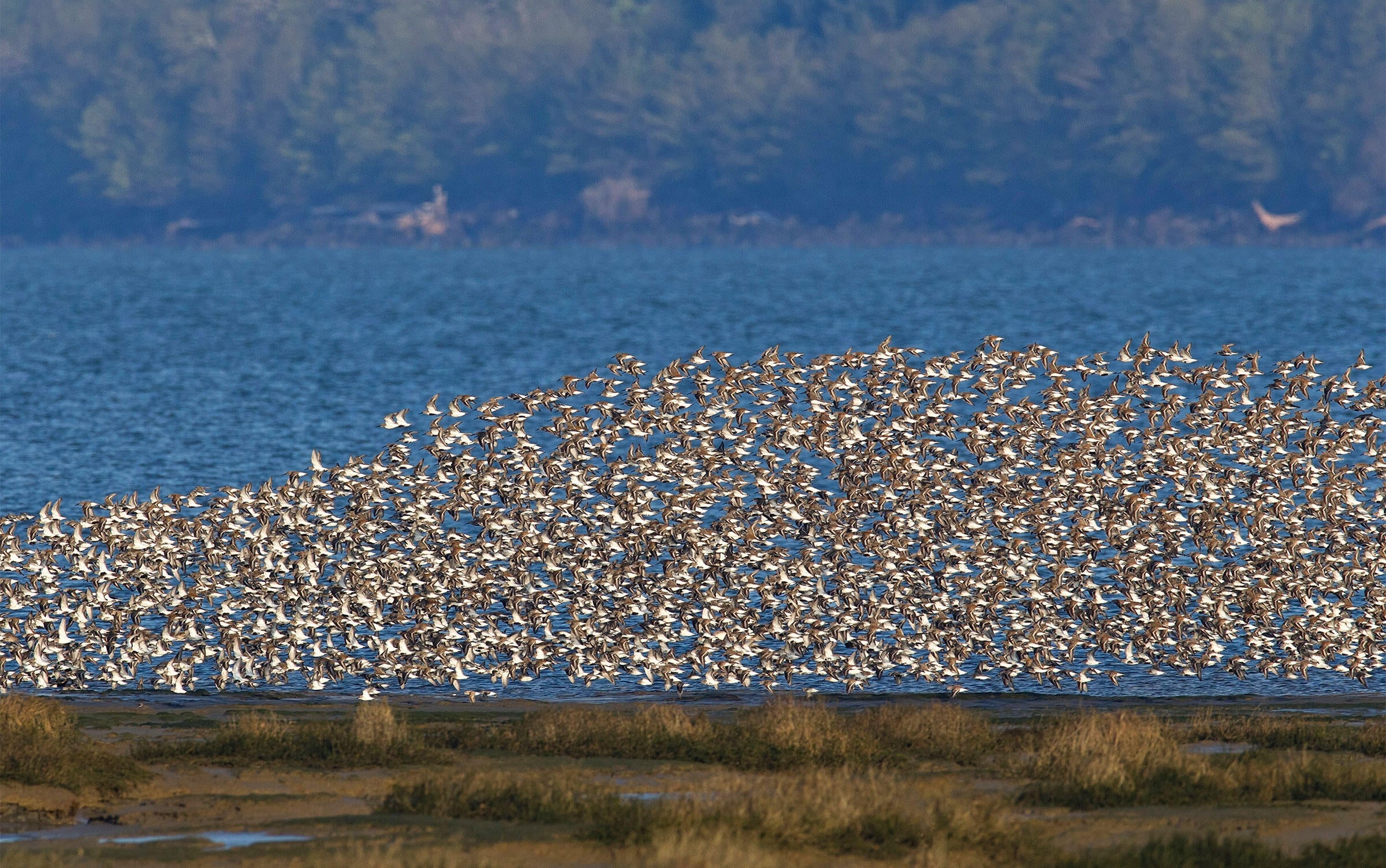 West Coast Marshes Are Drowning, But There’s Still Time to Save Their Birds

Karen Thorne has grown used to expressions of stunned shock whenever she gives a talk. It simply comes with the territory, the U.S. Geological Survey ecologist says, of informing hundreds of coastal wildlife managers that, in 100 years time, the places they care for will be underwater.

“They dedicate every day of their job out there conserving and managing these habitats,” Thorne says. “Then to be told that, well, in so many years, [those places are] probably not going to be there anymore because of a problem that’s out of their control? It’s very disconcerting for people.”

But when she shares the results of her new study, the most detailed sea level rise projections yet for Pacific coast marshes, that apprehension melts away. Published last week in Science Advances, the new work examines how rising waters will alter the ecology at 14 marshes, from Seattle in the north to Tijuana in the south, at 10-year intervals throughout the next century.

Like other reports on sea level rise, it predicts dire results by 2110, as rising waters inundate all coastal marshes in California and Oregon, and most of those in Washington. However, there’s a silver lining: It also finds that sea level rise will progress slowly until 2050. That gives today’s managers enough time to prepare marshes, and their birds, for the changes to come.

“It’s breaking down this monster problem into something that’s manageable,” she says. “You actually have 40 to 50 years to see what we can do. It gives people hope and motivates them to figure this out.”

One of these managers is Meg Marriott, a wildlife biologist at San Pablo Bay National Wildlife Refuge, located at the north end of San Francisco Bay. Marriott helps manage marsh habitat for Ridgway’s Rails, a federally listed endangered species that forages and nests among marsh grasses. All of its California habitat will likely be underwater by the end of the century, so managers like Marriott need to begin work now, long before the threats present themselves, to prevent its extinction.

In its specificity, Thorne’s study has been critical in informing their planning process, Marriott says. “There are lots of models out there for San Francisco Bay,” she adds, “but none were done by actually coming out onto the land and taking elevation measurements, except for Karen Thorne’s work.”

At all 14 marsh sites up and down the Pacific coast, Thorne led a group of researchers to measure land elevation, take soil cores, survey plants, and monitor water levels. Her team fed these various data into a sophisticated model to calculate how rising seas would affect ecological processes, such as vegetation patterns, sediment build-up, and erosion, at each individual marsh.

“She’s done such a service in providing this really detailed analysis of what’s going to happen to our marshes,” Marriott says. “We’re using that information to plan for climate change and sea level rise.” (Thorne made her results available to managers as they were available, years before the official publication of the work last week.)

According to Thorne’s research, the marshes of San Pablo Bay National Wildlife Refuge will drown eventually—but not all at once. First, the lowest-elevation marshes in the south end of San Francisco Bay will go under, and then the water line will creep northward into the higher-elevation marshes. Refuge managers identified one 400-acre marsh, called Sonoma Creek, that connects the southern marshes to the northern ones. “As the marsh migrates north, Sonoma Creek will be a corridor for animals migrating north,” Marriott says.

The refuge already had plans to restore Sonoma Creek in partnership with Audubon California to create vital habitat for Ridgway’s Rails. But after seeing Thorne’s projections, they incorporated new ideas to help rails survive rising seas, Marriott says. They built small islands (around 400 square feet in area) that sit above the water line, even during the year’s highest King Tides, for birds to run onto when water inundates the marsh. They also constructed a mud ramp over the levee, leading from the marsh to dry upland habitat, to provide an additional escape route. Without these dry areas, rails drown when tides or storm surges flood the marsh. Before fully submerging the area, sea level rise will send stronger tides and surges inland, and these occasional floods will threaten birds first.

Farther south, at Seal Beach National Wildlife Refuge near Los Angeles, managers have come up with a different solution to the problem. Like around San Francisco Bay, the land surrounding the refuge is urban and developed; not only does this prevent the marshes from moving inland as sea levels rise, but any rails that flee the floodwaters end up in the city, where they're readily caught by house cats and other predators. So, around 10 years ago, managers there built floating platforms and, during high tides, rails jump up onto them to stay dry. "It’s a short term-strategy, but it’s a great strategy," Thorne says, and one that could be easily replicated elsewhere.

These changes should help rail populations now, and over the next couple of decades. But additional restoration and management will be needed after that. “That’s the reason we’ve taken so much time and money and partnered with Audubon to enhance this particular marsh,” Marriott says. “We will have helped keep these guys alive in the initial stages of climate change and sea level rise.” In a few decades, she’ll pass off this work to the next cohort of refuge managers, who will use improved climate models to get the birds over the next hump of adaptation.

Even assuming that sea level rise is moderate, by 2110 most California marshes will have no dry areas, or will convert entirely to mudflats, according to the study.

This sort of work will be necessary to maintain marshes up and down California’s coast, according to the new study. Even assuming that sea level rise is moderate (around three feet), by 2110 most California marshes will have no dry areas, or will convert entirely to mudflats. Under high sea level rise (nearly four feet), all California marshes and some in southern Oregon will be replaced by mudflats, and some in southern California will become open water permanently, with no tidal activity to speak of.

Farther up the coast, in Washington, marshes are also predicted to grow wetter. But a few will persevere even as those in the south become mud. This is because these marshes don’t have cities and other development directly behind them, so they’ll be better able to adapt naturally and migrate inland.

“It looks like in the coming century, Willapa and Grays Harbor and other northwestern estuaries might be some of the last remaining salt marsh” on the Pacific coast, says Trina Bayard, director of bird conservation for Audubon Washington. They might become new hotspots for birds migrating up and down the Pacific Flyway. “We need to start thinking about planning ahead of that,” Bayard says, “thinking about land acquisition next to existing salt marsh, and looking for opportunities to provide for marsh migration. I think it really speaks to a need for more communication and coordination across the entire West Coast.”

Thorne hopes her new work will be a catalyst for these conversations, and guide managers throughout the Pacific seaboard toward a new model of conservation. It’s no longer enough to put a fence around important habitat to keep it safe for wildlife; managers need to take initiative to identify and protect areas that will become important habitat in 50 years, and actively alter habitats to make them resilient to coming change.

“That’s opportunity,” Thorne says. “If you know sea level rise is accelerating as the century moves on, which is what the projections are, then what can we do now so they don’t drown later? How can we identify these estuaries that are very resilient to sea level rise?”

For Pacific coast land managers, it’s the problem of the century. And now, thanks to this new research, they have the information they need to get to work solving it.