On the surface, birding might seem like neutral ground—an activity that any curious, nature-loving person can enjoy, regardless of age or gender. Go on a hike with your local ornithological club and at least half the attendees will be women. Circle the marsh with your binoculars and you’ll probably see a woman doing the same.

But female birders don’t always feel comfortable in the field, even with the rising awareness around #MeToo. Many of us keep on despite frequent put-downs and hostility, enduring dismissive comments about our knowledge and in the worst cases, sexual harassment. I’ve had men touch my hips to correct my perfectly fine birding stance. A ranger at a national wildlife refuge winked and told me about his “big, loaded gun.” My friends have been propositioned in parks and stalked by drivers along country roads. Not even a 16-year-old can bird in peace without commenters attacking her abilities and life list.

American Ornithological Society awards have gone to women in the past 10 years.

Like most matters of importance, women have been integral to birding from the get-go. Female ornithologists drew attention to avifauna in the late 1800s, and suffragists helped the movement take off in the early 1900s. Today, 42 percent of U.S. birders identify as women. Personally, female birders have run my world ever since I picked up a field guide in college. My ornithology professor was a woman. My boss at Audubon is a woman, as are most of my colleagues throughout the office. My birding circle is mainly members of the Feminist Bird Club.

And yet men have the loudest voices and the most power in the industry. The closer you get to the top of the birding, conservation, and academic ranks, the more the gender balance tips. At Audubon, for instance, the membership is 72 percent female, but the executive staff is 75 percent male—and the organization has never had a female president in its 114 years. This pattern persists industry wide. Men hold the highest positions at the American Birding Association, the Cornell Lab of Ornithology, and the American Bird Conservancy. They dominate bookshelves, festivals, competitions, and gear and travel ads. They build their reputations and livelihoods around the practice and reap the greatest profits.

For birding to be equal, we need more women in charge—and that's a change we're finally starting to see. Female leaders around the world are launching clubs and businesses that not only offer a safe space to bird, but also spread the wealth and agency to those who’ve long been discounted.

Judith Mirembe, Kimberly Kaufman, Molly Adams, and the founding members of The Phoebes are just a few examples of women trying to transform the community from its core. As most of them told us in interviews, the goal isn’t to split the birding world by gender; it’s 2019 and we’ve fought too hard against misogyny on all fronts to do that. The point is to gain parity, educate against prejudices, add new dimensions to the sport we love, and bring men along with us as we try to create a better, safer culture for everyone.

If men aren’t down with that, we ask them to please step aside so that we, the women, can get to work. —Purbita Saha, Associate Editor 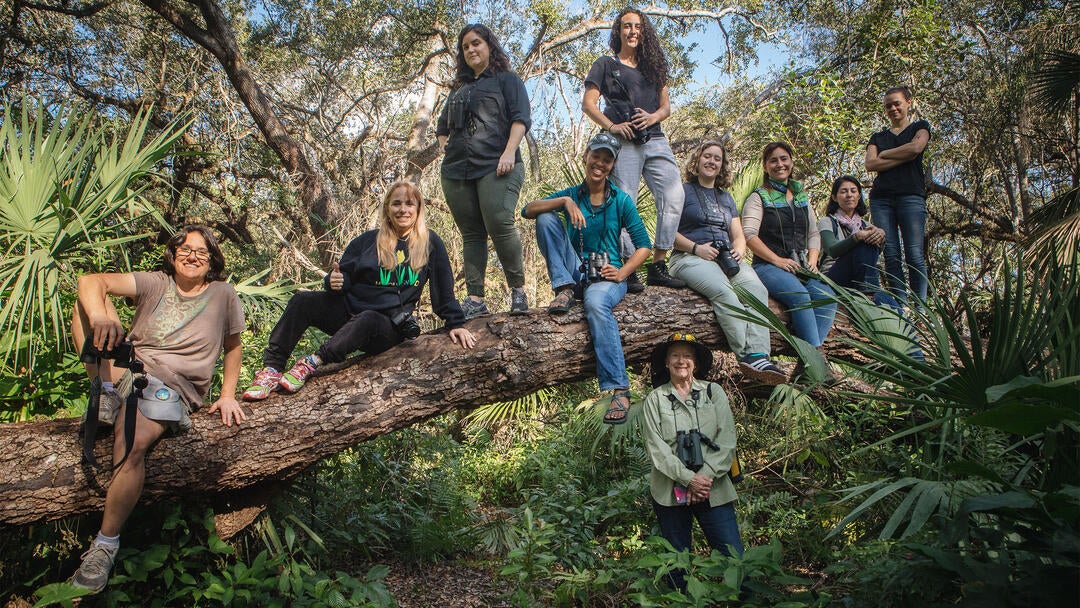 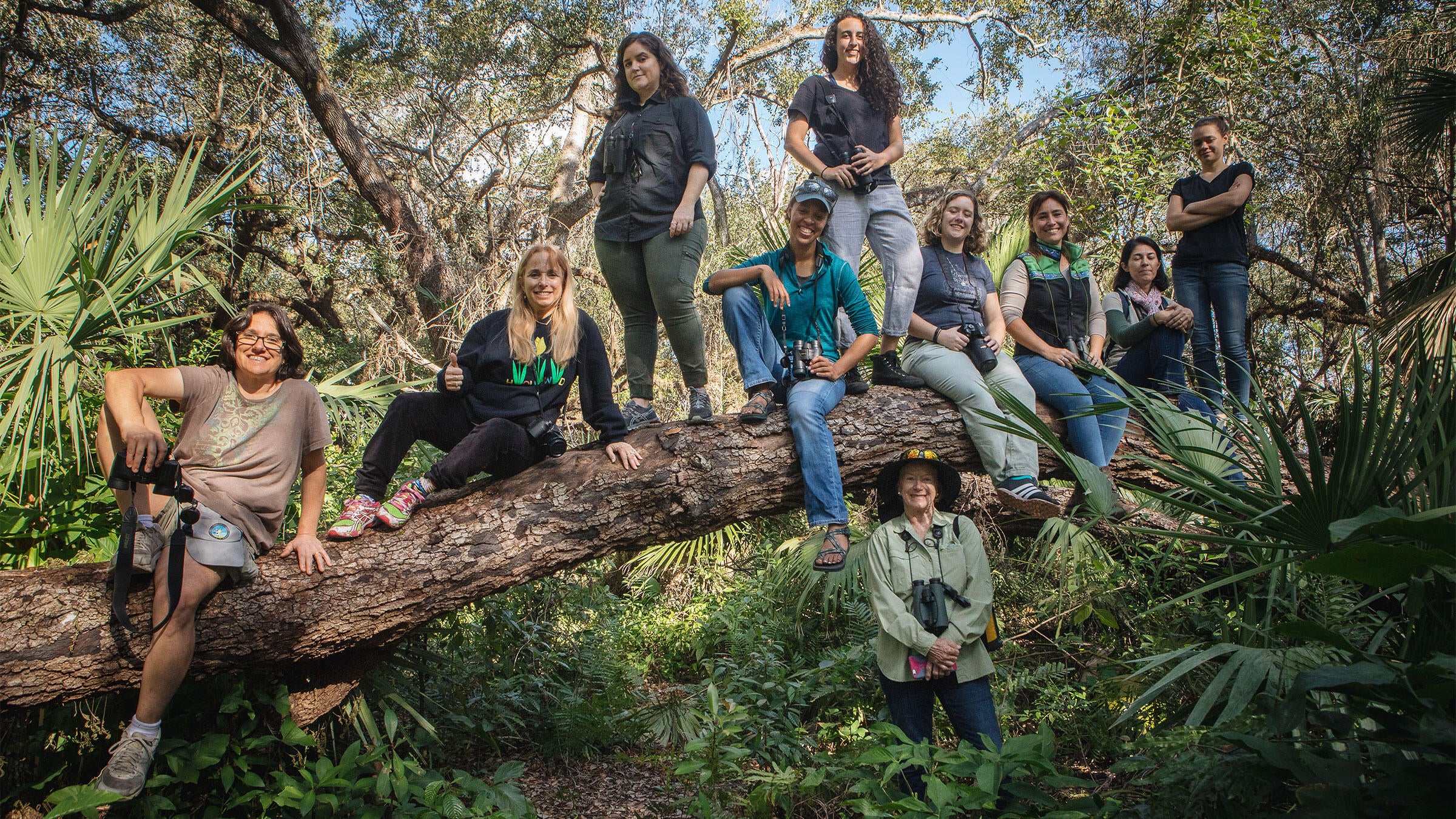 Birding for Solidarity: The Phoebes

Eight women decided they had enough of the sport's competitiveness, so they created a community to lift their sisters up.

If you’re in the presence of a male Eastern Phoebe, he’ll let you know. The small sooty-brown flycatcher cues his own arrival with a raspy, two-toned fee-bee that rings out from the woodlands. The female phoebe, meanwhile, keeps a low profile among the branches. Her nest, which she builds on her own, is an engineering marvel: a woven collage of mud, moss, grass, and fur.

But her subtle strength and fierce independence tend to go unappreciated—a feeling the Phoebes, a women’s birding group in South Florida, know all too well and are trying to amend, one mindful excursion at a time.

The founders of the Phoebes first met on a muggy October morning in 2017 during a fall-migration walk led by record-breaking birder Noah Strycker, the Tropical Audubon Society, and Leica Store Miami. The women hailed from a range of backgrounds—biology, education, culinary and visual arts—but they felt an instant connection through their shared love of nature and kindred perspectives. They spent much of the hike along the Biscayne Bay laughing, filling in the pauses between sightings with chatter and queries for Strycker, who responded deftly and supportively. By the end of the day, the women knew they’d experienced something different from the typical ID- and list-obsessed outing. They wanted to build on the collaborative spirit and decided to meet again.

Over dinner at wildlife photographer and writer Kirsten Hines’ house in Miami a few nights later, the ladies vented about their frustrations with “serious” birding: the competitiveness, the tendency to dismiss common species, the contempt toward newbies, the mansplaining. They decided to embrace their own style of birding—one that moved at its own pace, dwelled more on the animals and their environments, and above all, accepted any woman with an interest in Aves, no matter her skill or knowledge.

But what to call this sisterhood? The women settled on the Phoebes, in part because the drab songbird is often overshadowed by Florida’s tropical species. The name had feminist connotations as well: It paid homage to Phoebe Snetsinger, the driven, whip-smart birder who documented 8,300 avian species in her fifties and sixties, and Phoebe, a Titan from Greek mythology whose name signifies brightness.

“It was a powerful, feminine night,” says Leticia de Mello Bueno, one of the founding eight, who is now a communications manager at Audubon. “I felt queenly. There was the sense that something significant was happening through us.”

Fast forward a year and a half, and the Phoebes are on the ground doing exactly what they set out to accomplish. The club converges once a month at different locations in Miami-Dade County, including urban parks and beachside oases. Each walk draws an average of 20 participants, and the group’s mailing list includes 70 or so members.

The field trips offer a built-in space for empathizing and networking. Members are encouraged to take breaks to ask questions, work out basic IDs, and revel in the details of any species, avian or not. (A WhatsApp group allows them to keep up the conversation and share personal milestones in between meetups.) The women keep a list of all birds they see or hear to help track population trends for eBird, but otherwise they don’t tally species competitively.

It’s an approach that might generally appeal to more women than men. Both genders go birding with roughly the same levels of interest but with drastically different styles, according to a peer-reviewed study published in 2015. The researcher surveyed 954 members of the American Birding Association, 65 percent of whom were male. They found that men focused more on listing and traveled farther to see rare birds; women, on the other hand, birded closer to home and reported higher personal enrichment.

Hines stresses that everyone can channel the Phoebes’ mission and broaden their birding horizons, regardless of gender. “We are not anti-male,” she says. “We wanted to create a community for women that was pro-environment, and we see birds as a gateway drug for that.”

This perspective drives the group’s second calling: conservation. Miami, and Florida in general, is plagued by a slew of environmental issues, from pollution to invasive species to, of course, bird and habitat declines. The Phoebes have taken part in two Christmas Bird Counts, volunteered with the Cape Florida Banding Station, and hosted native-plant walks—activities that have piqued some younger recruits’ interest in conservation careers. Even the monthly birding outings can be a form of stewardship. “Listing [on eBird] is really helpful in understanding the impact of climate change and which species are going one way or another,” says Hines. The Phoebes help compile data on avian migration, breeding fluxes, and behaviors that might otherwise go unnoticed.

Which brings us back to the female bird that inspired Hines and her friends to transform their beloved pastime. History has it that it was the first species to be banded in North America; in 1804 John James Audubon tied silver threads onto five nestlings in Pennsylvania, then watched for them to return every spring.

The Phoebes also watch for the return of their namesake in Florida every winter. True to form, they celebrate each and every one they find.