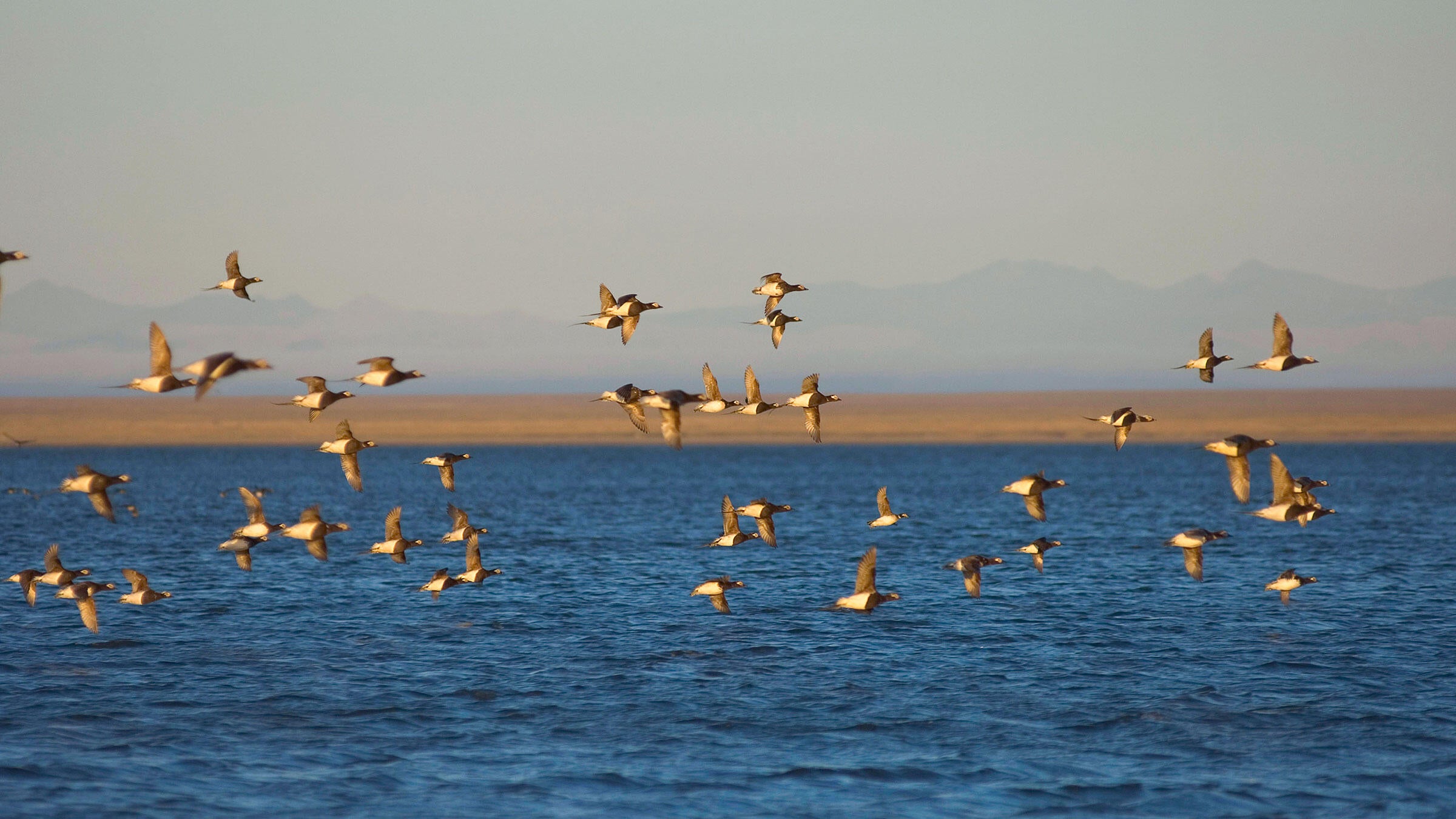 Long-tailed Ducks fly over the Beaufort Sea, where Hilcorp Energy Company received the first-ever approval from the Interior Department to extract oil and gas from beneath the seafloor in federal Arctic waters. Photo: Steven J. Kazlowski/Alamy

The Beaufort Sea along Alaska’s north coast is bitter cold, packed with marine life, and underlain with millions of gallons of oil. Since the 1980s, oil companies have targeted a shallow area five miles from shore—between Prudhoe Bay, once North America’s most productive oil field, and the coast of the Arctic National Wildlife Refuge, the largest wildlife refuge in the country—to build an oil and gas production facility, the first in Alaska’s federal waters. But they were stymied by technical problems, ever-expanding budget estimates, and regulatory concerns.

Now, as the Trump administration pursues oil and gas development with fervor, drilling there might finally happen. In October, after Houston-based Hilcorp Energy Company acquired a lease to the land, the Bureau of Ocean Energy Management, or BOEM, signed off on a plan to develop the site, known as the Liberty Energy Project. If Hilcorp decides to go forward with the project, the company will build a nine-acre gravel island six miles offshore to base their operations and bury a seven-mile pipeline under the seafloor to connect the extracted oil and natural gas to the Trans-Alaska Pipeline System.

To gain approval for major energy projects like this one, U.S. law requires that BOEM take stock of how the project would affect the environment. The resulting document, known as an environmental impact statement, details the risks that proposed infrastructure and a potential oil spill might pose to the region’s caribou herds, breeding shorebirds, polar bears, and passing bowhead whales, as well as the project’s impact on water and air quality, including climate change.

However, if you look carefully at the section on the environmental consequences of greenhouse gas emissions for the Liberty Project (on page 4-52), the agency draws a surprising conclusion: That extracting 120 million barrels of oil from beneath the Arctic Ocean over the project’s 15-to-20-year lifetime would reduce global carbon emissions, and by no small amount. According to the agency, developing Liberty would save more than 25 million metric tons of carbon dioxide—or the equivalent carbon pollution emitted by 5.3 million cars over a year. In other words, the report determines that transporting and dumping gravel in the ocean to construct an artificial island, drilling into the seafloor to capture buried oil, and extracting some 70,000 barrels of the stuff each day at peak production is better for Earth’s climate than doing nothing at all. 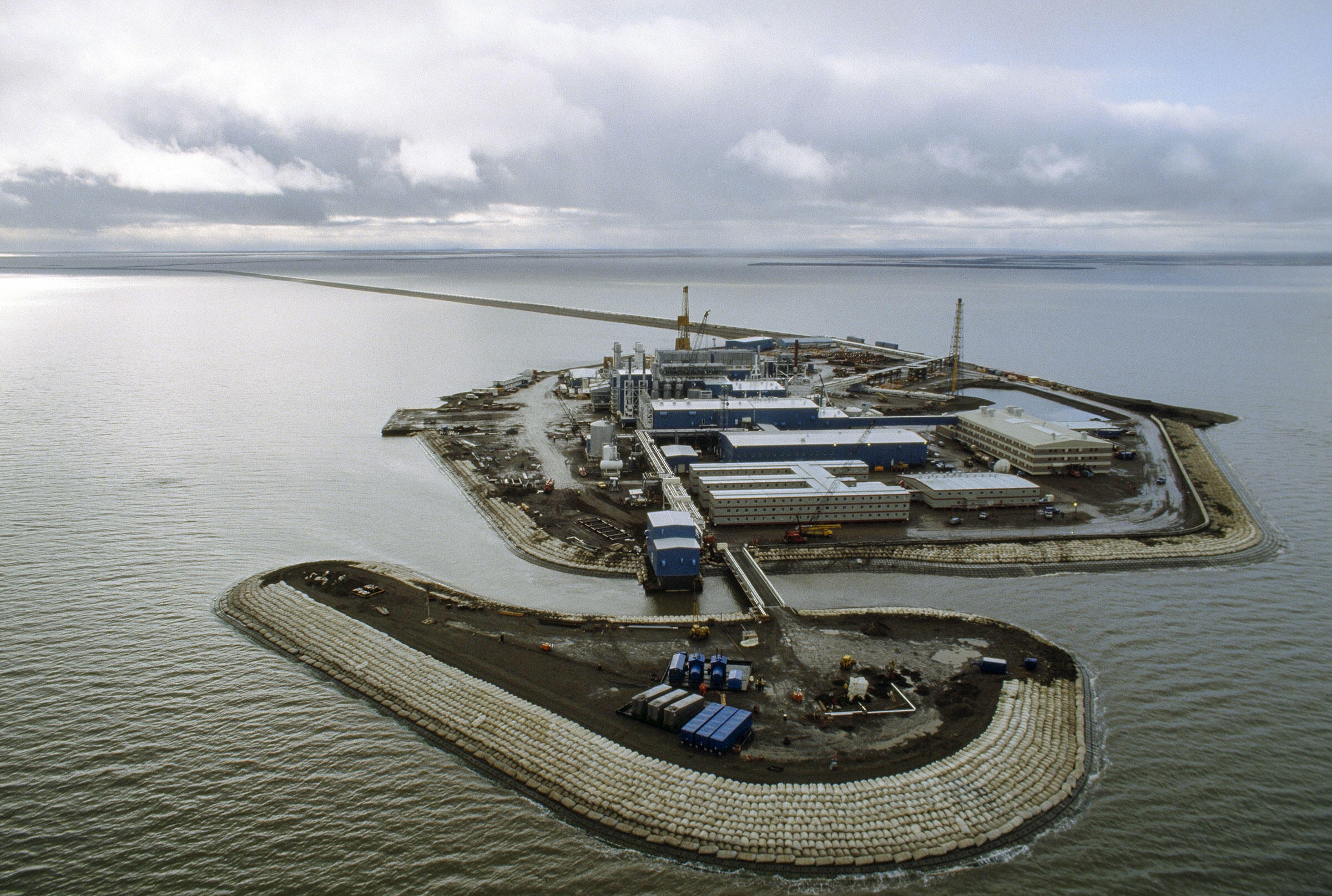 Endicott Island is a 45-acre manmade gravel island, constructed in 1987, used as an offshore drilling platform off Prudhoe Bay in state waters in the Beaufort Sea. If Hilcorp Energy goes forward with the Liberty Energy Project, the company would construct a similar, but smaller, nine-acre gravel island to drill for oil beneath the seafloor in federal waters. Photo: James P. Blair/National Geographic Image Collection

“That’s just a crazy, crazy analysis,” says Jeremy Lieb, an attorney at Earthjustice, a non-profit legal firm that focuses on environmental issues. Last month, the Center for Biological Diversity and a host of other conservation groups represented by Earthjustice filed a lawsuit against the Department of Interior, which oversees BOEM, on the grounds that the agency’s environmental analysis of the Liberty Project distorts the damages associated with drilling and ignores basic economic principles. “It appears to be a convenient way for agencies to rationalize that any individual project will have essentially no effect on global greenhouse gas emissions,” Lieb says.

The use of a model that undersells carbon emissions appears to be a directive coming from inside the Department of Interior. When Audubon asked Frances Mann, a BOEM biologist who worked on the environmental impact statement for the Liberty Project, about the climate analysis, she said, “we used the models that we were required to use.”

The BOEM report reasons that in place of oil coming out of the Arctic, nearly the same amount of oil would be produced elsewhere in the world from places with “comparatively weaker environmental protection standards” and “increased emissions from transportation,” according to the federal document. 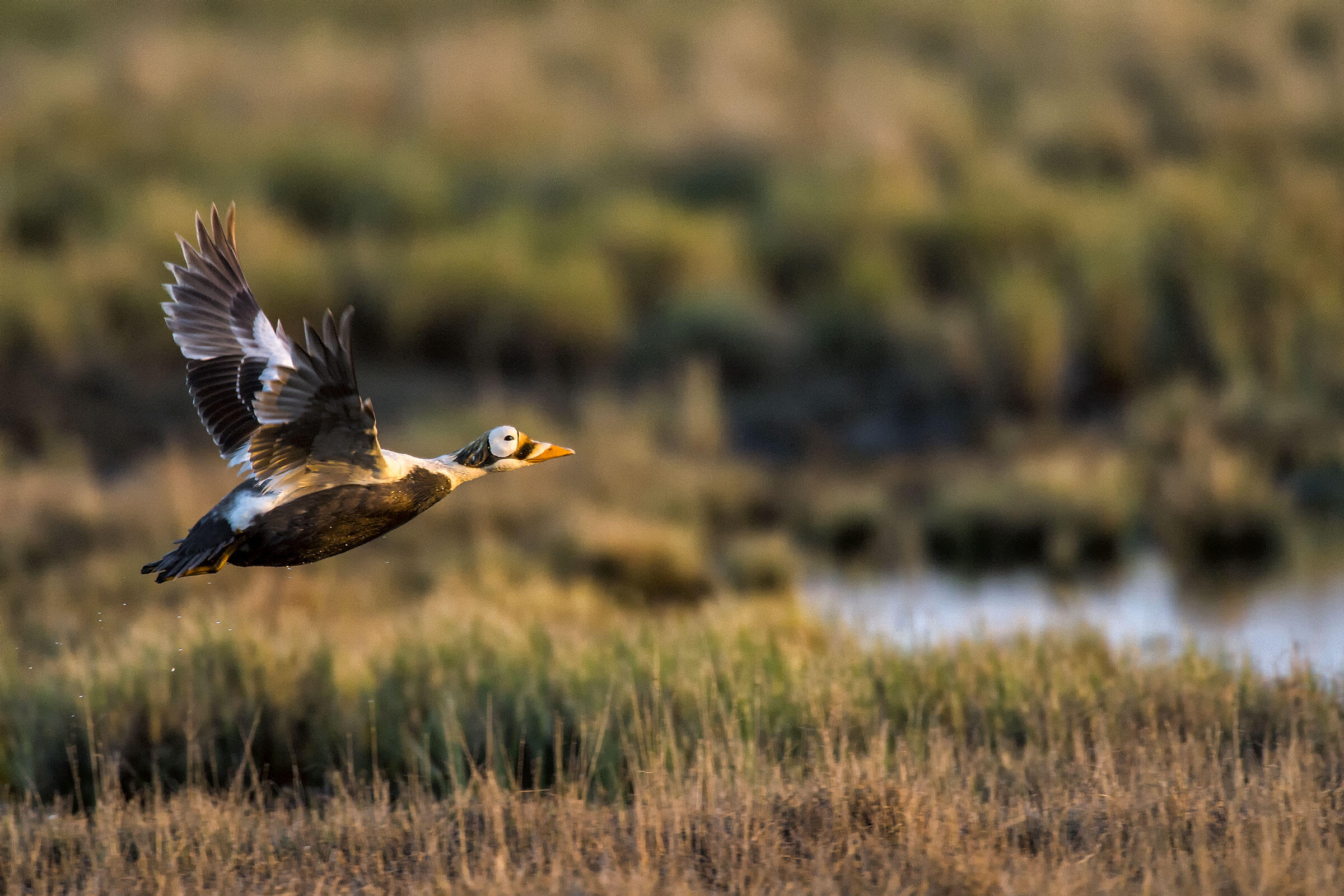 A Spectacled Eider lifts off from the Arctic National Wildlife Refuge, where the Trump administration is aggressively pushing plans to drill for oil and gas. In a recently released environmental impact statement for that project, the Interior Department used debunked models for calculating the climate impact of the project, an effort one economist described as an intentional obfuscation. Photo: Peter Mather/National Geographic Image Collection

This assumes that any oil not extracted in the Arctic would be replaced with foreign oil that uses dirtier methods and costs more to transport, ultimately emitting more carbon. That logic requires some economic gymnastics, says Gilbert Metcalf, an economist at Tufts University who specializes in energy and climate policy. “I just don’t find it credible,” he says. It’s more likely that Arctic oil would be replaced by oil from fracked wells in the United States, like those common in North Dakota and Texas, rather than overseas oil, Metcalf says. What’s more, producing oil in the Arctic is no pristine operation—it emits more carbon than oil produced in the Gulf of Mexico, according to a 2015 report released by the Carnegie Foundation, because of the difficulties of extracting oil in such harsh conditions.

The analysis makes another error, says Peter Erickson, a senior scientist at the Stockholm Environment Institute, an international research and policy non-profit organization. Basic economic models show that when more oil is produced in the United States, more oil is bought and combusted internationally. That’s because when there’s more oil on the market, prices drop—simple supply-and-demand economics. The Liberty Project analysis, and others, don’t fully take this effect into account, he says; they ignore the fact that the extraction of fossil fuels actually increases global carbon emissions.

“The underlying assumption is very common,” Erickson says. For years, including before Trump took office, government reports failed to account for the likely increase in consumption. Erickson first flagged the error in the analysis of the Keystone XL Pipeline, writing in a 2014 Nature Climate Change report that the State Department underestimated the project’s overall emissions—the difference between releasing up to 27 million tons of carbon dioxide annually and up to 110 million tons. “There was this sort of giant blind spot,” Erickson says.

BOEM also miscalculated carbon emissions in its draft analysis of Arctic and Atlantic offshore oil drilling in 2016, he says. After that, though, the agency seemed to learn from its mistakes. In November 2016, a BOEM report found that halting new drilling projects over five years would lower foreign oil consumption by billions of barrels. This could decrease global carbon emissions by up to 2.3 billion tons, Erickson estimates, more carbon than the entire U.S. transportation sector emits in a year. 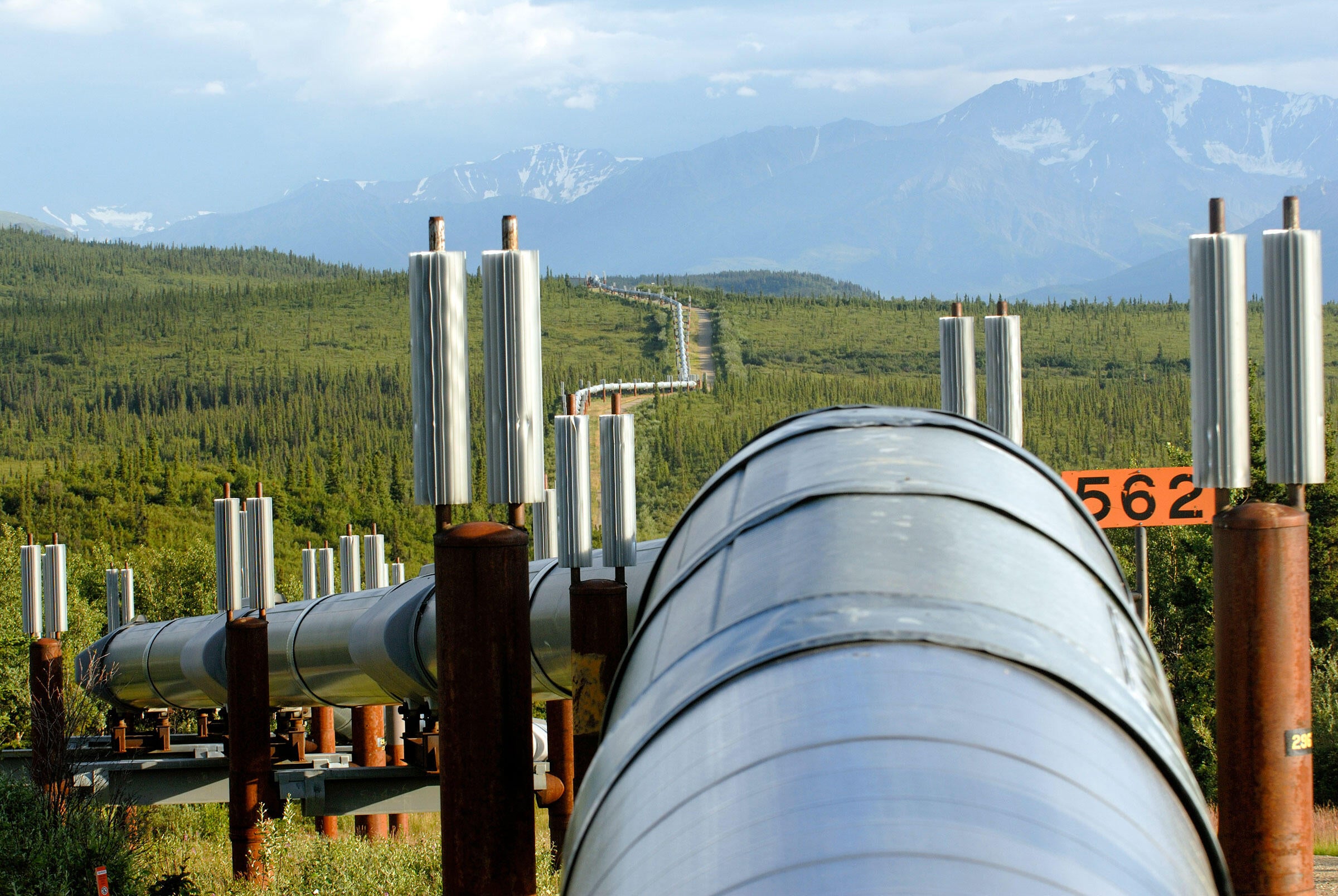 If Hilcorp goes forward with the Liberty Project, it will bury a seven-mile pipeline under the seafloor to carry extracted oil and gas to the Trans-Alaska Pipeline System, shown here. It takes around 12 days for oil and gas to move from Prudhoe Bay through more than 800 miles of above-ground pipe built in Alaska's wilderness to the endpoint at Valdez Marine Terminal. Photo: Dermot Tatlow/Panos Pictures/R​edux

This argument has held up in court. In 2017, a federal judge struck down another flawed emissions analysis conducted by the Bureau of Land Management on a coal project in Colorado. “She said very specifically [that] it’s irrational to say increase in supply is not going to increase consumption,” Erickson says.

Yet despite increased recognition of the problem, the Liberty Project environmental impact statement relies on debunked reasoning to conclude that developing the site would result in lower carbon emissions. This is an intentional move on the part of the Interior Department, Erickson says. “It’s not a misguided model; it’s a purposeful misuse of the model,” he says. “It’s enabling their decision and their allowance to expand the fossil fuel supply.”

Federal agencies continue to use the same flawed model in analyses of other new energy projects. A draft report detailing how drilling for oil in the Arctic National Wildlife Refuge would impact the environment, released December 20 by the Bureau of Land Management, also failed to account for the global increase in emissions from development. "It appears as if [the Bureau of Land Management] is purposefully obfuscating the question of the global oil market and CO2 emissions implications," Erickson told Audubon over email.

Audubon is a nonprofit, and our journalism depends on the generosity of our readers. You can support stories like this by making a donation today.

When it came time to prove it could safely handle an offshore spill in Alaska, the oil company flunked its own test.