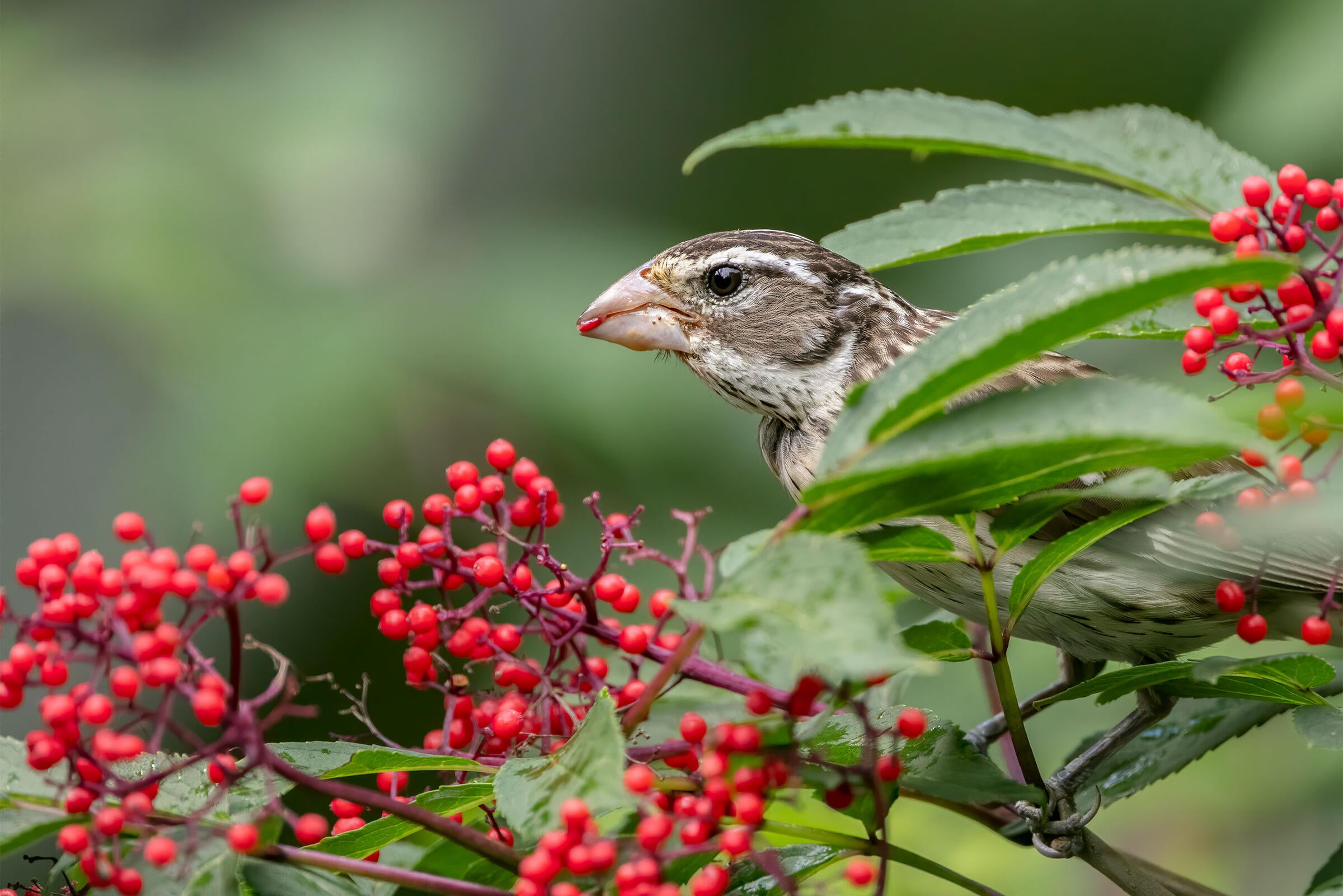 Enjoy some of our favorite submissions to the Plants for Birds category of the 2020 Audubon Photography Awards. 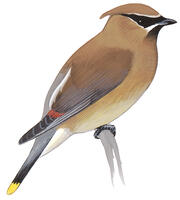 Of course, you wouldn't know it looking at the below submissions to the Plants for Birds category of the 2020 Audubon Photography Awards. As with last year's awards, when the new category debuted, we once again received so many stellar shots that, in addition to the official winners and those selected for the the Top 100, we've decided to share more of our favorites in a bonus gallery.

Whether they capture birds gorging on berries or belting their songs from a budding branch, each of the images below showcases the vital role native plants play in the everyday lives of birds. Not only does local flora provide more food and better shelter than non-native plants, but as threats like climate change and habitat loss continue to put pressure on birds, the availability of native trees, shrubs, and flowers grows even more imporant.

Check out the incredible gallery below to learn more about each bird species and the native plant featured. And if you’re feeling inspired afterward, you can help birds and the environment by growing native plants around your own home or community. Audubon’s Plants for Birds program has the resources to help you get started. Use our native plant finder tool to identify plants native to your region, and then learn how you can make your backyard or balcony more bird-friendly.

Rose-breasted Grosbeak on Red Elderberry (above)

To capture this Rose-breasted Grosbeak mid-fruit snack, the photographer allowed a native bush of red elderberry to flourish in the summer near their home in Quebec, and waited patiently until this female came along to feed her nearby young ones. While they’re currently found in stable numbers, research from avian ecologists suggests that grosbeaks are unable to keep up with seasonal temperature increases and early blooms as a result of climate change. 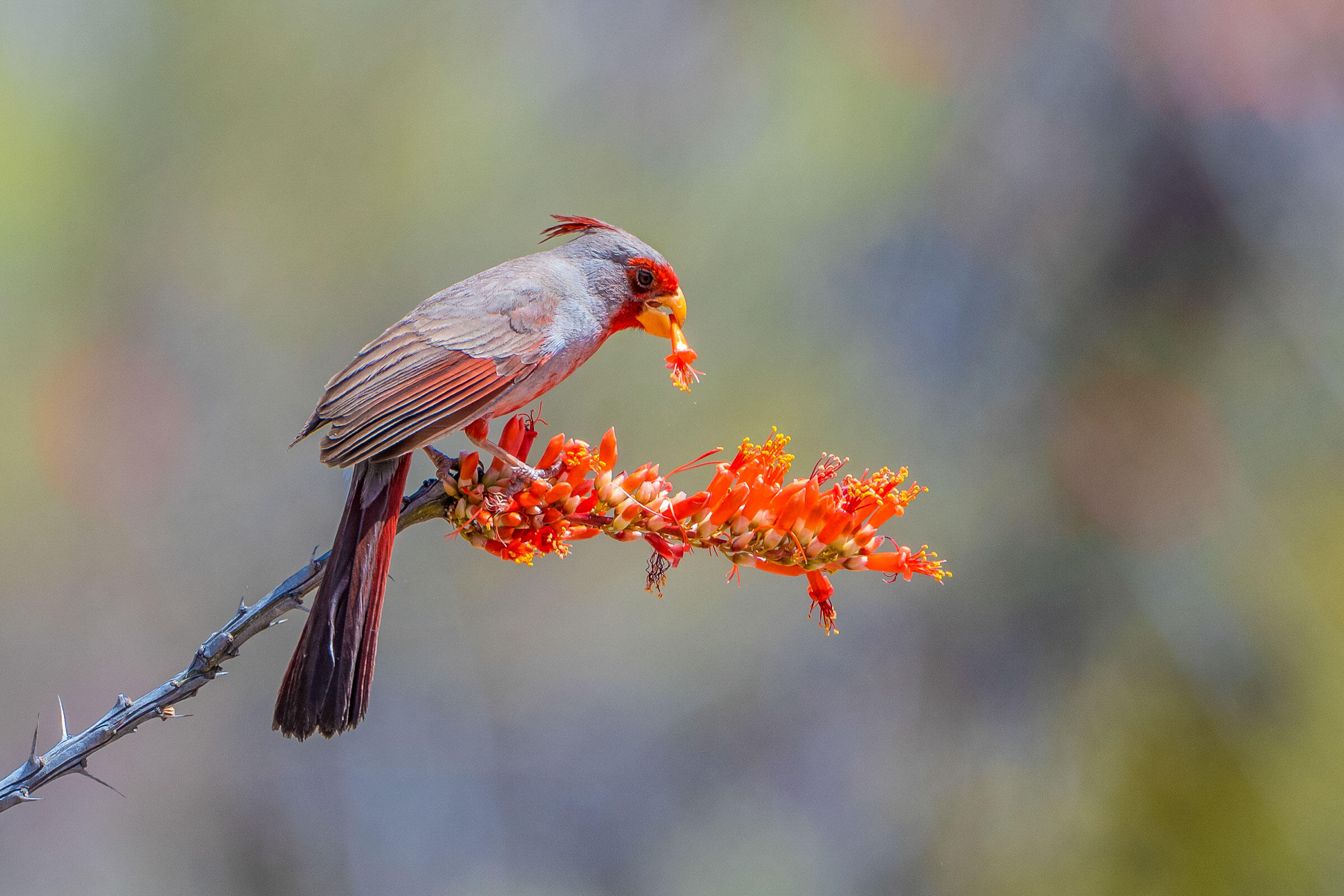 Among the saguaro cactus blooms and wildflowers, desert environments in Arizona’s spring months host a dramatic color pairing worth looking for: The burnt red and gray feathering on the Pyrrhuloxia, known as the “desert cardinal,” against the red-orange blooms on an ocotillo. Pyrrhuloxias are primarily ground foragers, usually hopping among shrubs on the desert floor, but as this cactus-like plant blossoms, these birds are found feasting from the top sometimes as high as 15 feet.

This Song Sparrow perches on a cattail in Washington state while it gathers nesting materials on a sunny morning. Cattails and their cottony fluff make for ideal nest lining for native birds that build nests in the springtime. When her mouth wasn’t full of cattail fluff, this female sparrow sang while working—a rare treat, considering it’s the male Song Sparrows that more typically live up to the species’ name. 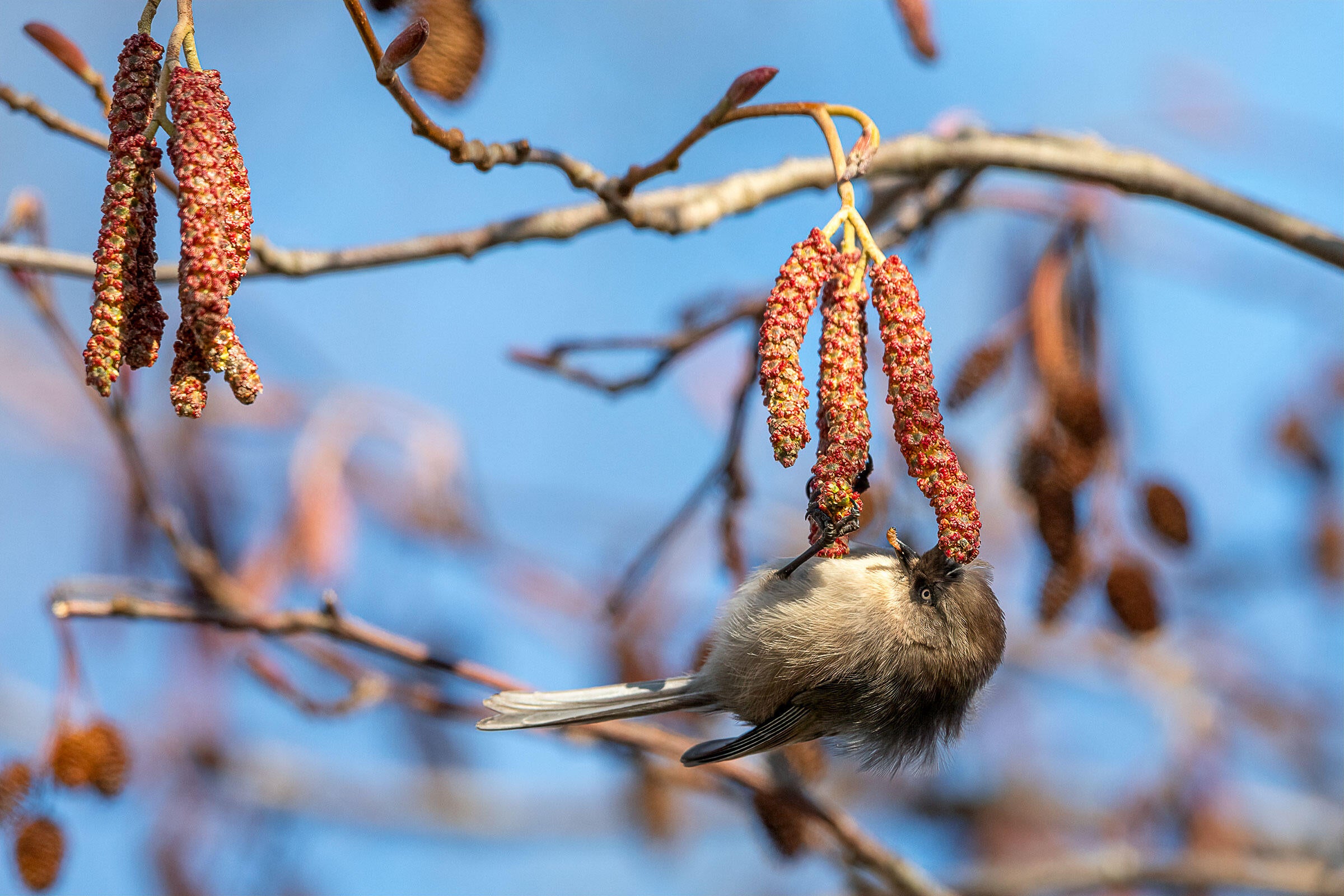 Don’t let this slick Bushtit deceive you. Though the red alder’s catkins—the long, cylindrical flowers that mark the first blooms of spring for this tree—may seem like the main course, the bird is actually feasting on larvae buried in the flower. This photo displays the advantage of the Bushtit’s diminutive size: Larger birds tend to forage from the top of plants, but Bushtits can bank on their light weight (less than one-fifth of an ounce) to hang upside down. 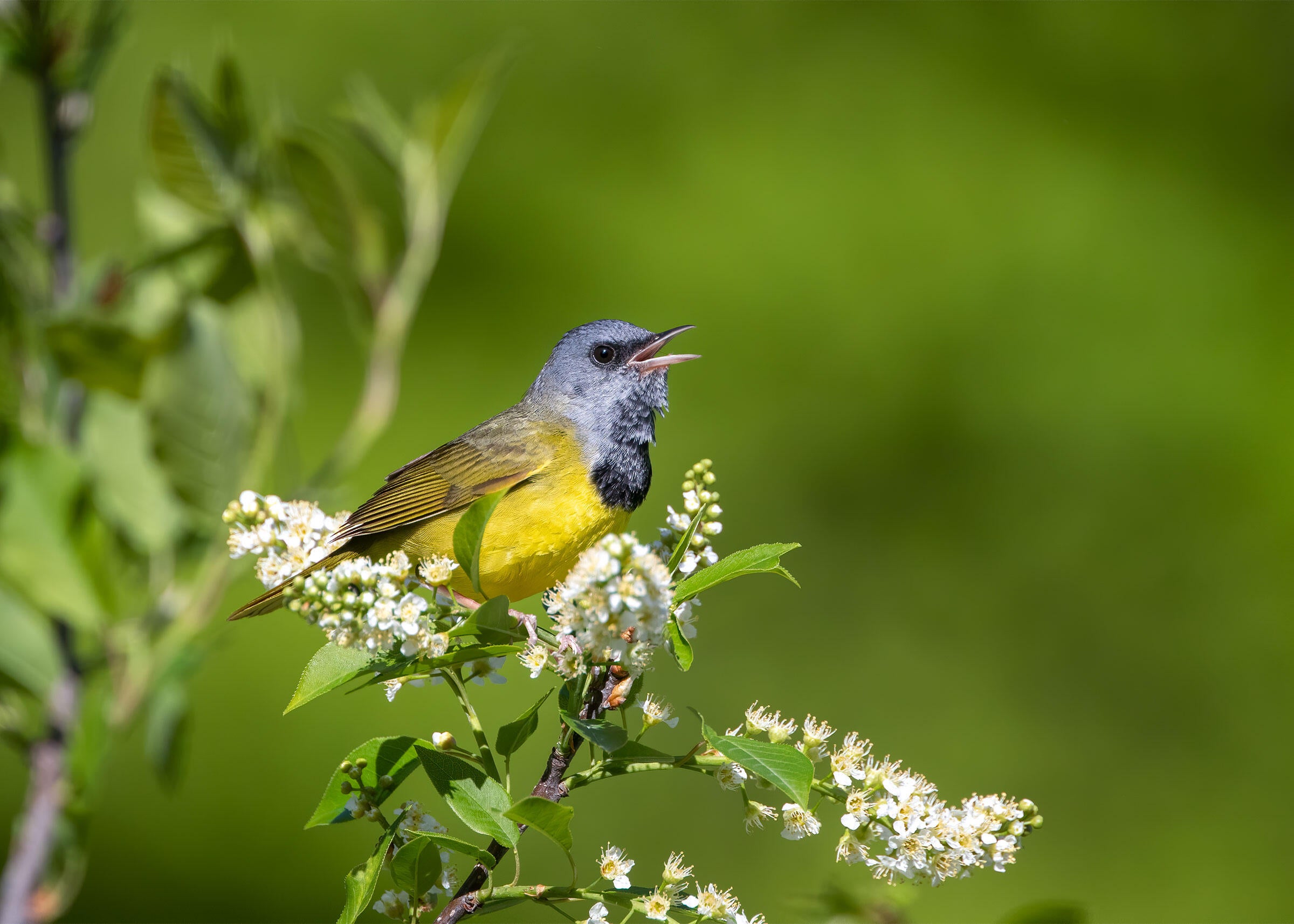 A typically elusive Mourning Warbler sings in plain view atop a black cherry branch. The black cherry shrub crawls with a variety of insects during the warbler’s breeding season in the northern U.S. and Canada. Mourning Warblers share these shrubs with other small birds who find the plant's low perches ideal for foraging and, in this image, singing. 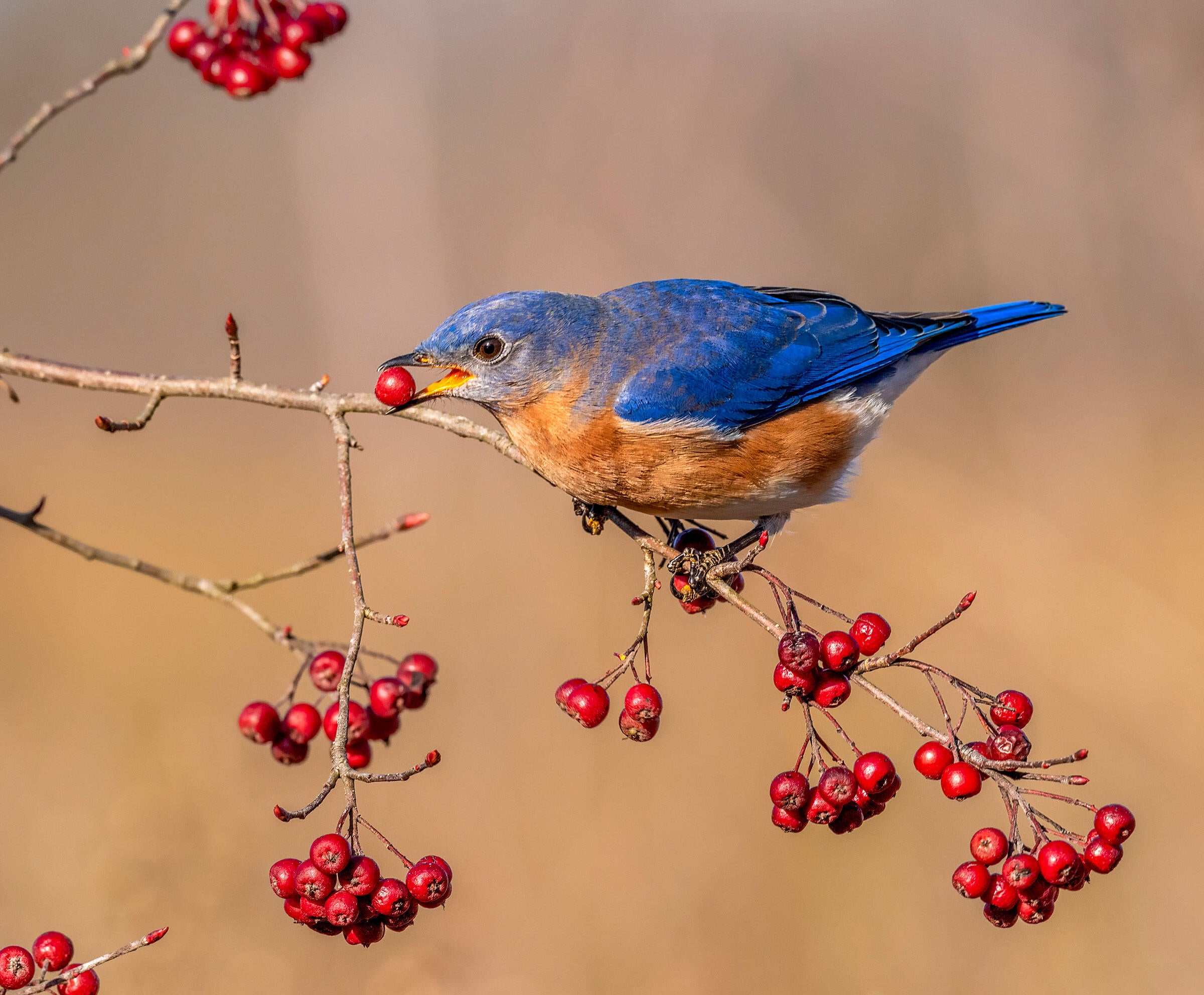 On a cold January morning, an Eastern Bluebird feasts on a bounty of winterberries. While the lean winter months can pose a risk for the species, native plants like the winterberry holly are major food providers. This shot, taken at a suburban park in Virginia, demonstrates the benefits of replanting native plant species in semi-urban areas to attract and aid birds in the region.

Striking a postcard-quality pose, this Canada Jay perches from the peak of a ponderosa pine near Aspen, Colorado. These birds know how to make their cold northern habitat work for them: The native ponderosa pines and boreal trees basically act as their refrigerators, where Canada Jays store food from the fall in the tree’s bark flakes and branches, to be eaten throughout the winter months. 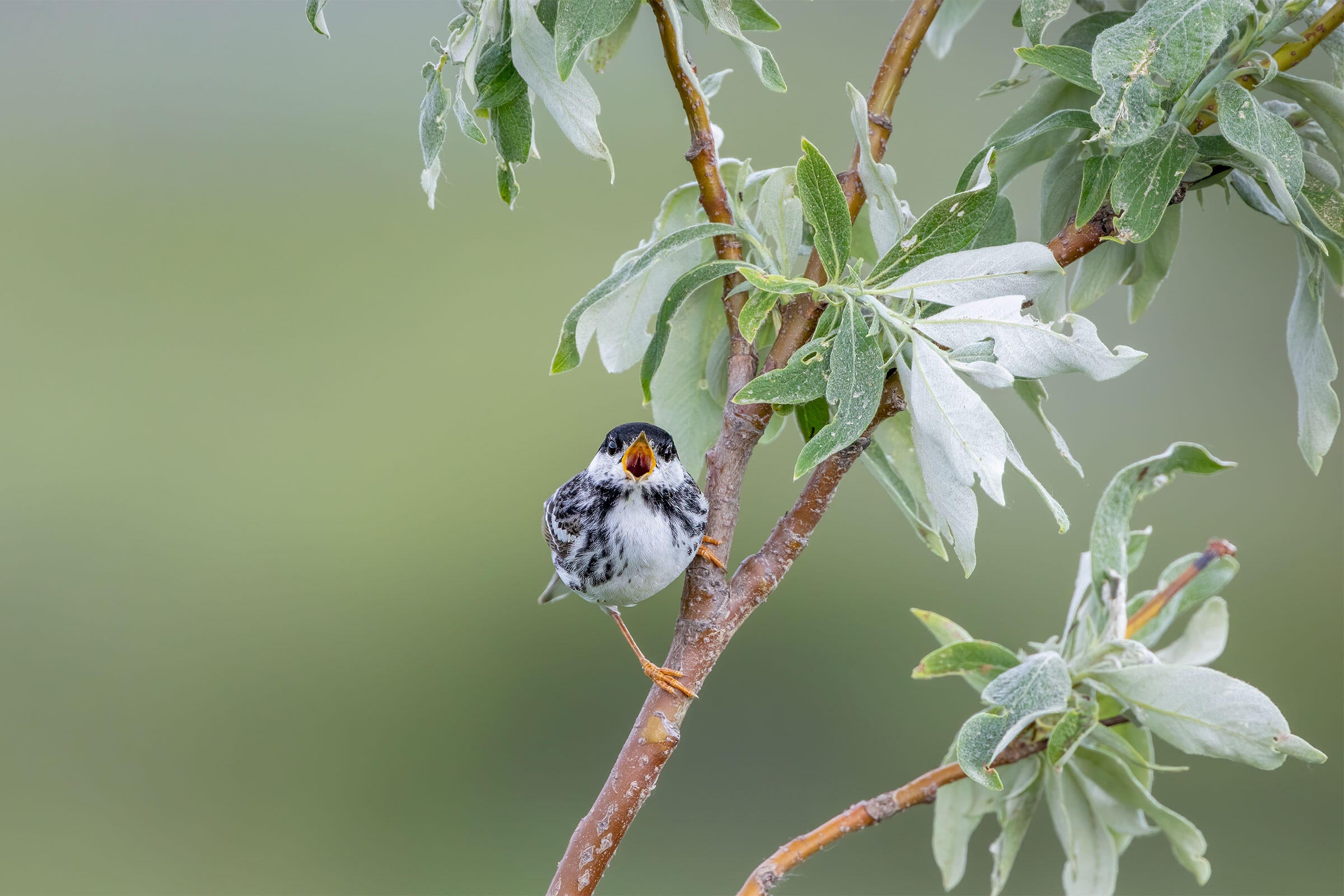 A tiny Blackpoll Warbler strikes a fierce stance while singing from a thicket of willow shrubs in Nome, Alaska. These birds have many reasons to be drawn to willow shrubs, which provide perches, protection, nesting sites, and a buffet of insects. The Blackpoll Warbler doesn’t just look tough—he made an immensely long journey during migration to reach Alaska from his wintering habitat in northern South America. 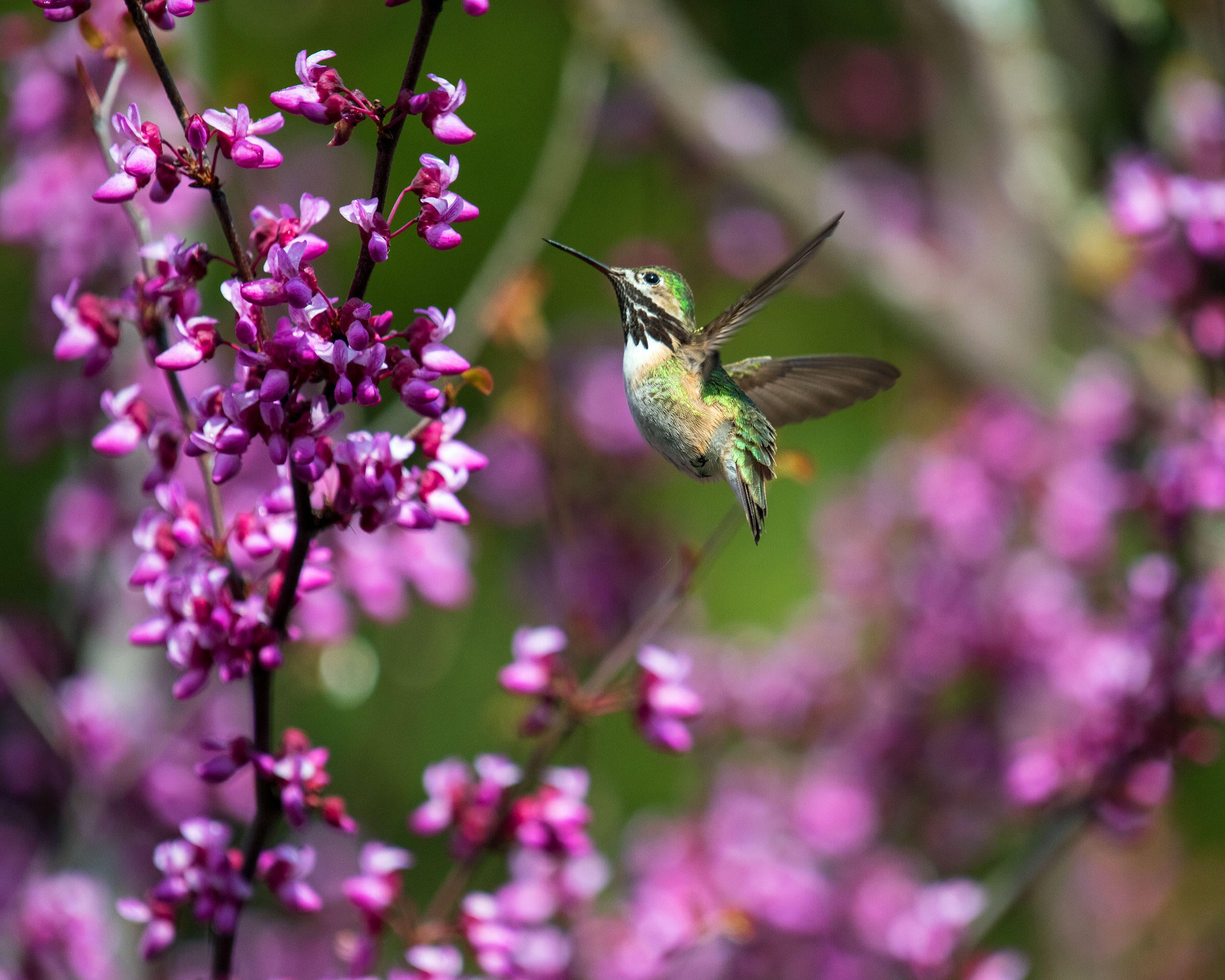 It’s impressive enough that a Bay Area photographer managed to snap such a clear shot of a Calliope Hummingbird, but to capture it with the first blooms of a native California redbud is a feat worth celebrating. Calliope Hummingbirds share these vibrant, sweet flowers with local Anna’s Hummingbirds while migrating north to their summer breeding range. 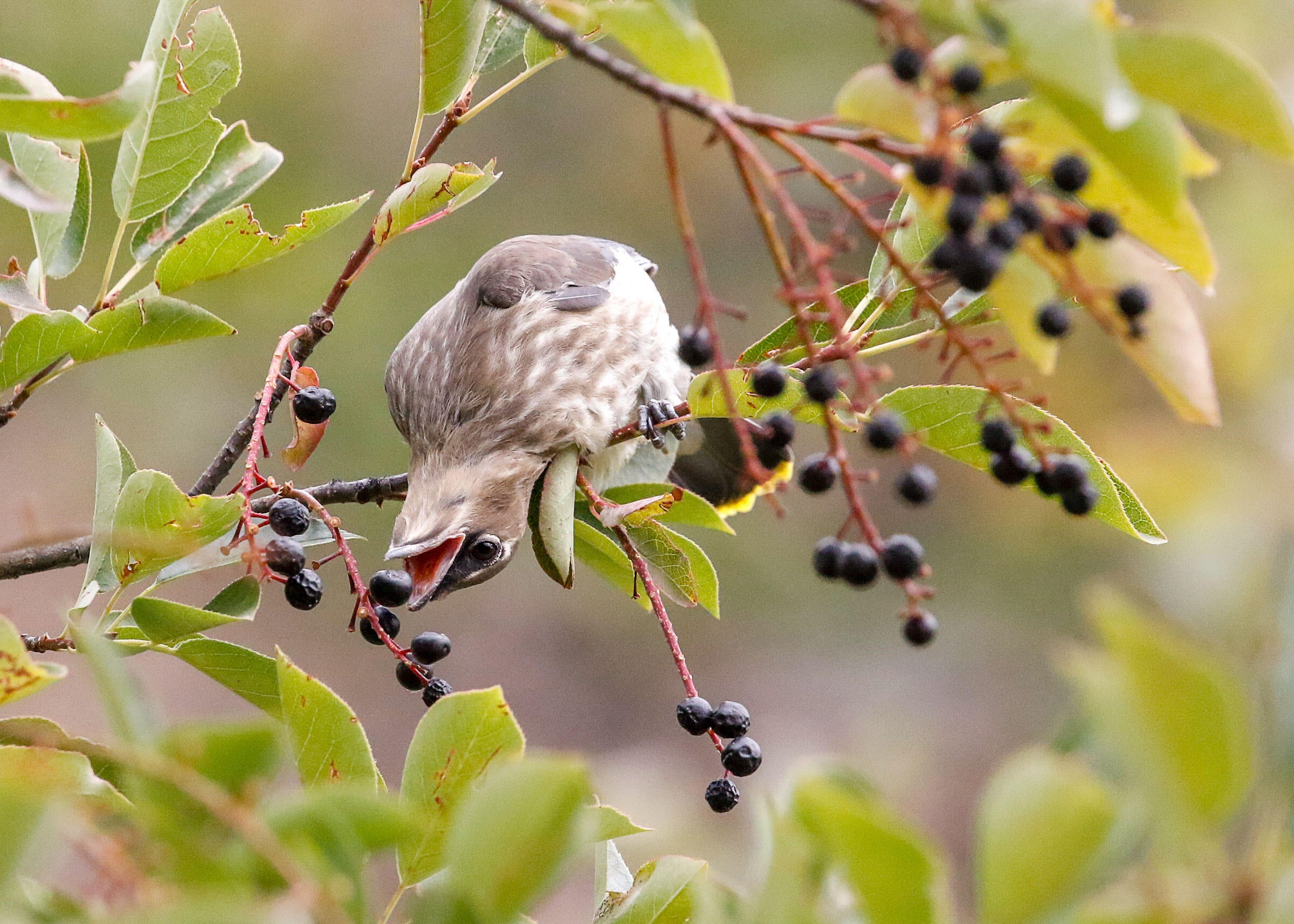 This young Cedar Waxwing relies on its acrobatic reach to feed from a chokecherry shrub in autumn. As the chokecherries ripen in the summer and fall months, Cedar Waxwings incorporate them into their already fruit-heavy diets. Such a diet has led to a phenomenon where, after gorging on berries in the winter and spring that have been over-ripened, thawed and fermented, waxwings have been known to get tipsy. 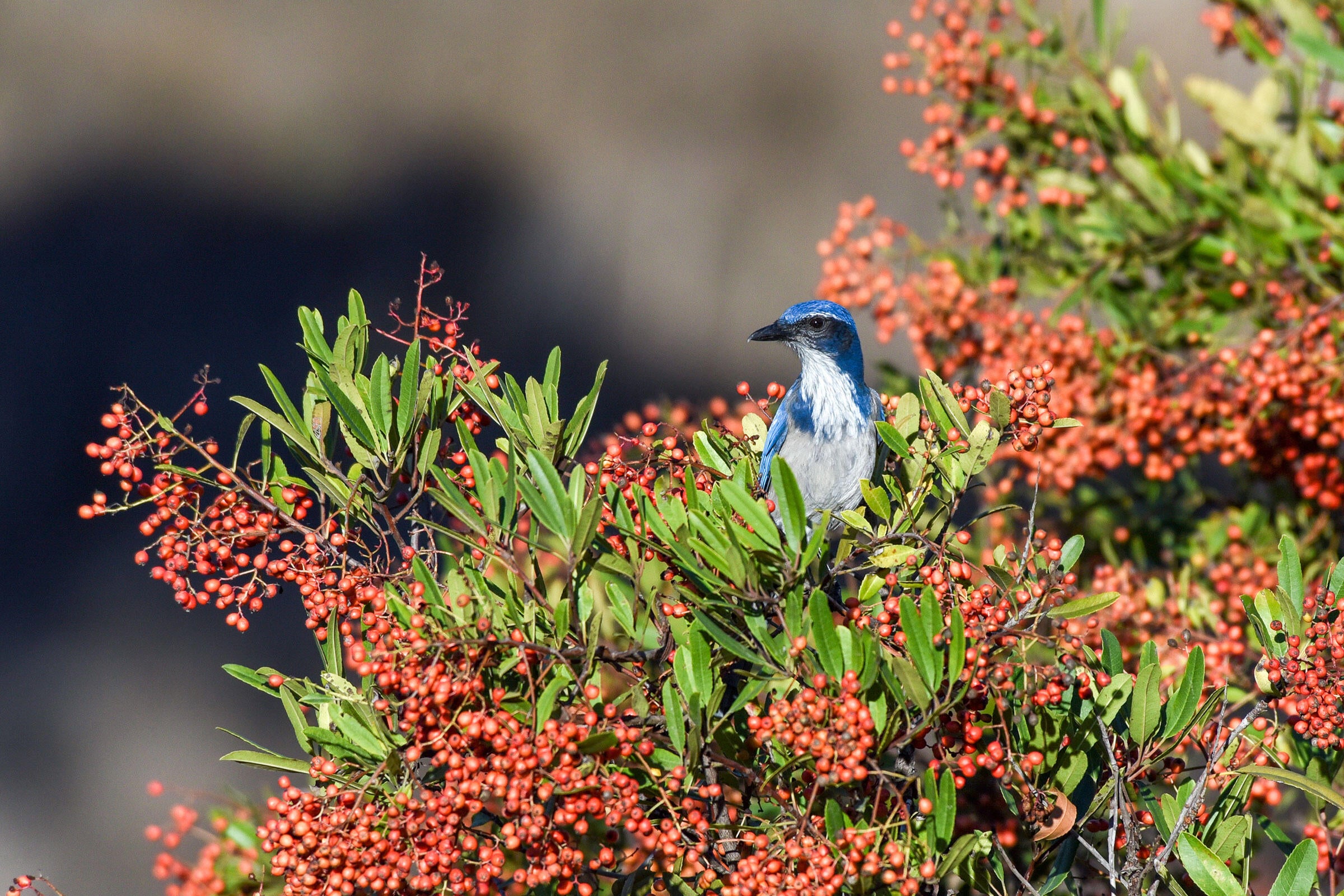 The Toyon Shrub, known as the California holly, fruits in full in the winter, providing a plentiful food source to a number of the region’s bird species, including the California Scrub-Jay. This photo, taken in the urban oasis of Los Angeles’ Kenneth Hahn State Recreation Area, shows California Scrub-Jays in their most accessible habitat: well-wooded suburbs and city parks.

This inverted Carolina Chickadee is picking seeds out of a sweetgum tree's seed balls. Foraging insects and seeds from plants is crucial for chickadees, because they don’t typically use bird feeders during nesting season. This also makes them vulnerable as landscapers replace native plants. Researchers found, for example, that the birds are being driven out of the suburbs of Washington, D.C., where native trees are being replaced by non-native ones that supply fewer food sources. 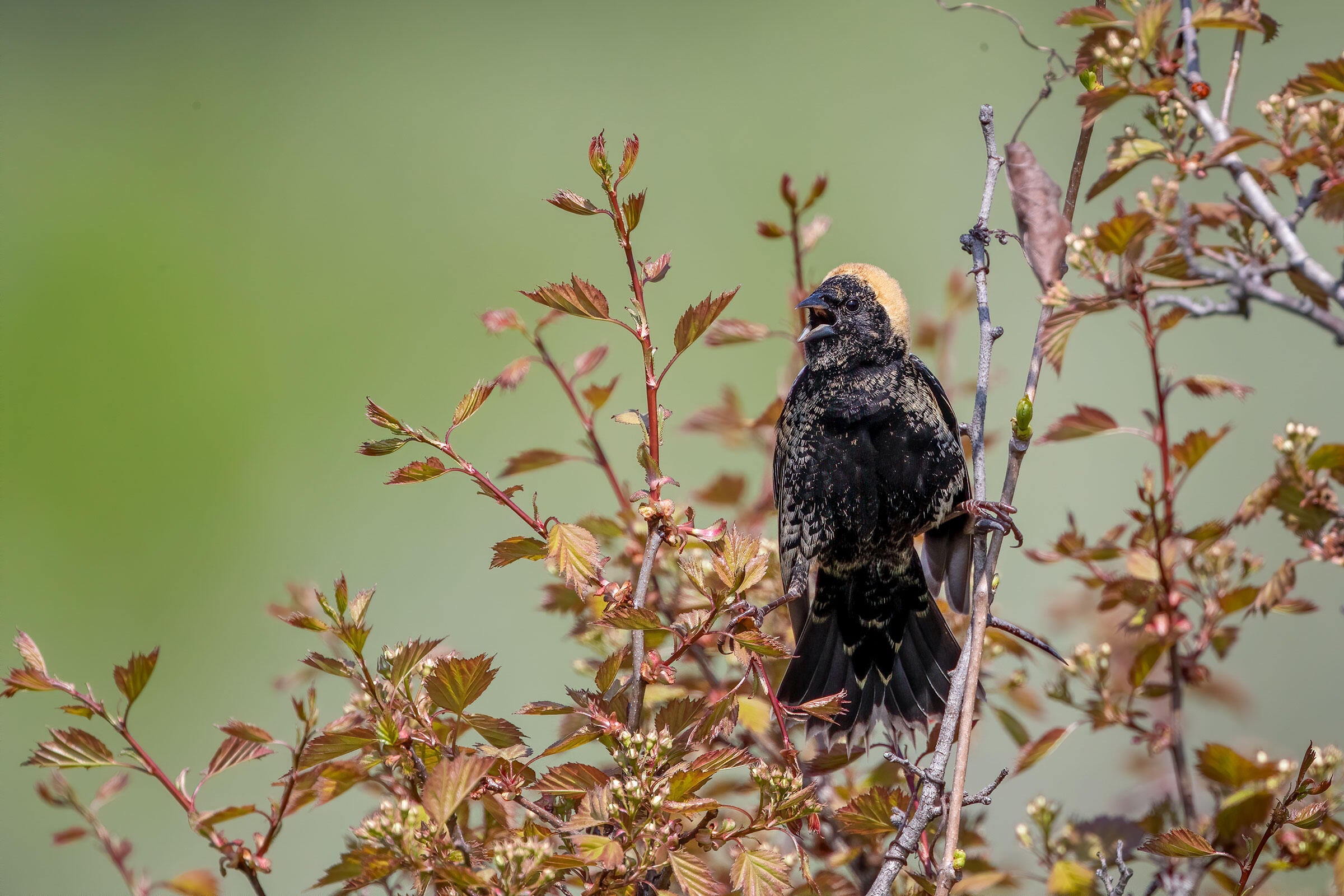 The molting stage for this male Bobolink has left him without his typical jet-black chest just before the fall migration, as he sings from a native hawthorn adorned with red-and-gold leaves. Bobolinks are well-known for their distinctive, twinkling song that gives them their name. They are in fast decline in the eastern U.S. as they lose grassland habitat and invasive plants replace beneficial ones, like hawthorn. The crimson feathers of Hawaii’s ‘I’iwi make it an eye-catching favorite of birders hiking in the higher elevations of Hawaii’s forests. This threatened honeycreeper’s distinct curved beak is buried in a native māmane flower as the bird laps up nectar between rainstorms. Despite its popularity, the ‘I’iwi is a threatened species due to the spread of malaria from lowland mosquitos, which are now moving to higher elevations thanks to climate change.