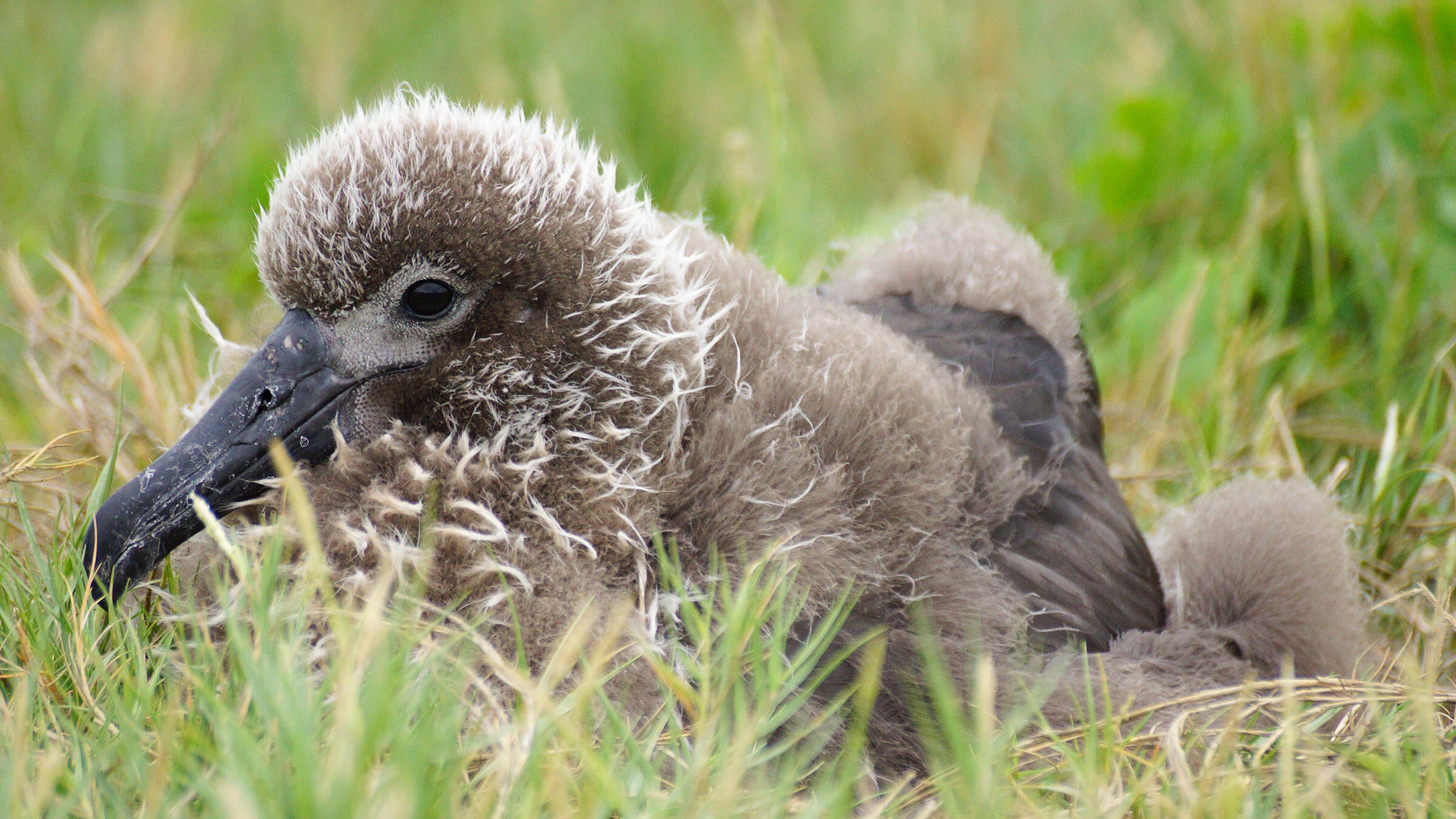 Nine, one of the founding members of a new Laysan Albatross colony on the main Hawaiian Islands, roosts in the grass, decked out in intermediate plumage—half adult flight feathers, half gray down. Photo: Rachel Fisher

Meet Nine, a Fledgling Albatross That Could One Day Help Save Her Species

The teenage years aren't easy for young Laysan Albatross as they awkwardly grow into flight feathers. This is the third story in our series about efforts to create a new albatross colony in Hawaii, one egg at a time.

Editors' Note: This is the third story in a three-part series by Kim Steutermann Rogers about the creation of a new Laysan Albatross colony at James Campbell NWR. Catch up with the first and second stories.

As Laysan Albatross breeding season wound down in June, Megan Dalton wished for good weather. A sunny day would be nice for fledging. But more importantly, she hoped the northeast trade winds blowing through Hawaii’s James Campbell National Wildlife Refuge would be just right—strong enough to help a chick aloft, yet not too strong to blow it back onshore.

Dalton, an avian biologist with Pacific Rim Conservation, was particularly concerned about a chick that had become a favorite—a chick known as “Nine.”

“But you can never rush an albatross,” she told me. “They’re always going to [fledge] on their time.”

On Oahu’s north shore, an hour drive from Waikiki, Dalton is part of a three-year project to create a new colony of Laysan Albatross in the main Hawaiian Islands. A predator-proof fence encloses the 16-acre area at James Campbell NWR and 20 chicks—relocated from another active colony—were hand-raised by Dalton and other biologists over four months. Every day their growth and activity was monitored, with each chick fed and weighed according to its individual needs.

The effort might seem excessive for a species with a healthy population of 750,000 breeding pairs. But 99 percent of the birds nest on the low-lying islands, islets, and atolls of the uninhabited Northwestern Hawaiian Islands, which are threatened by sea level rise. Scientists project that rising seas will create bigger storm waves that wash away nests during breeding season. After losing enough eggs and chicks, many seabird species would choose to nest somewhere safer, but not Laysan Albatross. They're philopatric, which means they return to nest at the same spot every year no matter how many previous nests fail. Without human assistance, the long-lived species will not be able to adapt quickly enough to keep up with the changes.

The stakes for the new colony—and for the species—are high, and so the survival of each and every chick matters. That’s why Dalton worried so much about Nine. Nine’s troubles started late last year when her mother laid an egg near a runway at the U.S. Navy’s Pacific Missile Range Facility on the neighboring island of Kauai. To protect the eggs from planes, and the planes’ engines from birds, a batch of the fertile eggs were collected and flown to Oahu where they were fostered by parents whose eggs had failed. Then, a few weeks after hatching, 20 chicks were moved again, this time to James Campbell NWR, where researchers hope to establish a new colony unthreatened by rising seas or planes.

“Nine arrived from the wild, and right away something appeared to be wrong,” Dalton said. Nine had stinky breath and a tight stomach. An endoscopy confirmed the problem: intestinal blockage. A camera slid down Nine’s throat spotted grains of sand that had compacted with a piece of white plastic and several bits of a red balloon, likely fed to her during the few weeks she’d spent with her adoptive parents. A wash of water flushed the sand and tiny forceps removed the plastic. Nine was lucky: Eating plastic is sometimes deadly for seabird chicks, including Laysan Albatross.

But the blockage’s damage had been done; at that point, Nine had grown just half as big as the next biggest bird. “We weren’t sure she was out of the woods,” Dalton said. “She couldn’t walk for the longest time. She just shuffled along.”

Nine wasn’t the only bird with problems. Two died soon after they were translocated to James Campbell NWR—one of an unknown kidney issue, the other due to complications after a piece of plastic punctured its stomach lining. Then, some chicks developed lesions associated with avian pox virus, a mosquito-borne disease that occurs in a variety of bird species worldwide, and that only rarely affects fledging success of Laysan Albatross chicks.

Eventually Nine got her legs under her, the chicks’ pox cleared up, and the season progressed. Her wings grew to their sleek six-and-a-half-foot length, and chocolate-brown flight feathers and white contour feathers replaced thick gray down. Days, weeks, months passed. People across the country celebrated Memorial Day and the start of summer while the chicks grew healthy from Dalton’s regular supply of seafood slurry. They also started displaying behaviors more common in adults—courtship dancing and grass baths.

To prepare for fledging, Laysan Albatross chicks exercise their wings, often achieving lift-off, if only for a few seconds. Dalton can recognize the change in behavior when fledging is imminent: Chicks will take a couple steps backward, bend over, and leave one last streak of scat on land before emitting an emphatic peep and setting off, running and flapping until they elevate into the air on their maiden voyage out to sea.

That’s exactly what started happening in mid-June, and one by one, chicks began fledging. But the challenges of this albatross-breeding season for Dalton weren’t over. There was the problem of wind. Ironically, albatross are known as masters of lift, gliding for days and hundreds of miles at a time. But this summer the first chicks to fledge from James Campbell NWR met some unusually strong winds that blew them back to land. Dalton and her team collected them, and on their second attempts these chicks were all successful.

But Nine, a week or so behind developmentally, remained on the ground. This turned out to be advantageous because by the time Nine pooped, peeped, and run-flapped her way into the air, it was a good day to fledge. The winds were just right, and she flew over Dalton who was watching from the ground below.

Including Nine, 17 Laysan Albatross fledged from James Campbell NWR this summer. The project’s goal is to match the fledging success of wild birds, which ranges from 60 to 80 percent. The first two years saw 29 chicks fledge with relatively few issues apart from the ever-present stench of fish slurry and the nights of worry that go with raising seabird chicks from hatching to fledging. When Nine lifted off on July 7, the project had met its benchmark: After three years, 46 chicks had fledged out of 50 relocations, putting the fledging rate at 92 percent—far above the fledging success of wild birds. After spending three to five years at sea, these chicks will hopefully return to the place they were raised—James Campbell NWR, not their birthplace—and start the process of selecting a mate for breeding. If they do, the project will be deemed a success, and at least this Laysan Albatross colony will be protected from predators and storm waves alike.

“Now, they’re on their own,” Dalton said. “We’ve done as much as we can to guarantee their survival. The rest is up to them.”