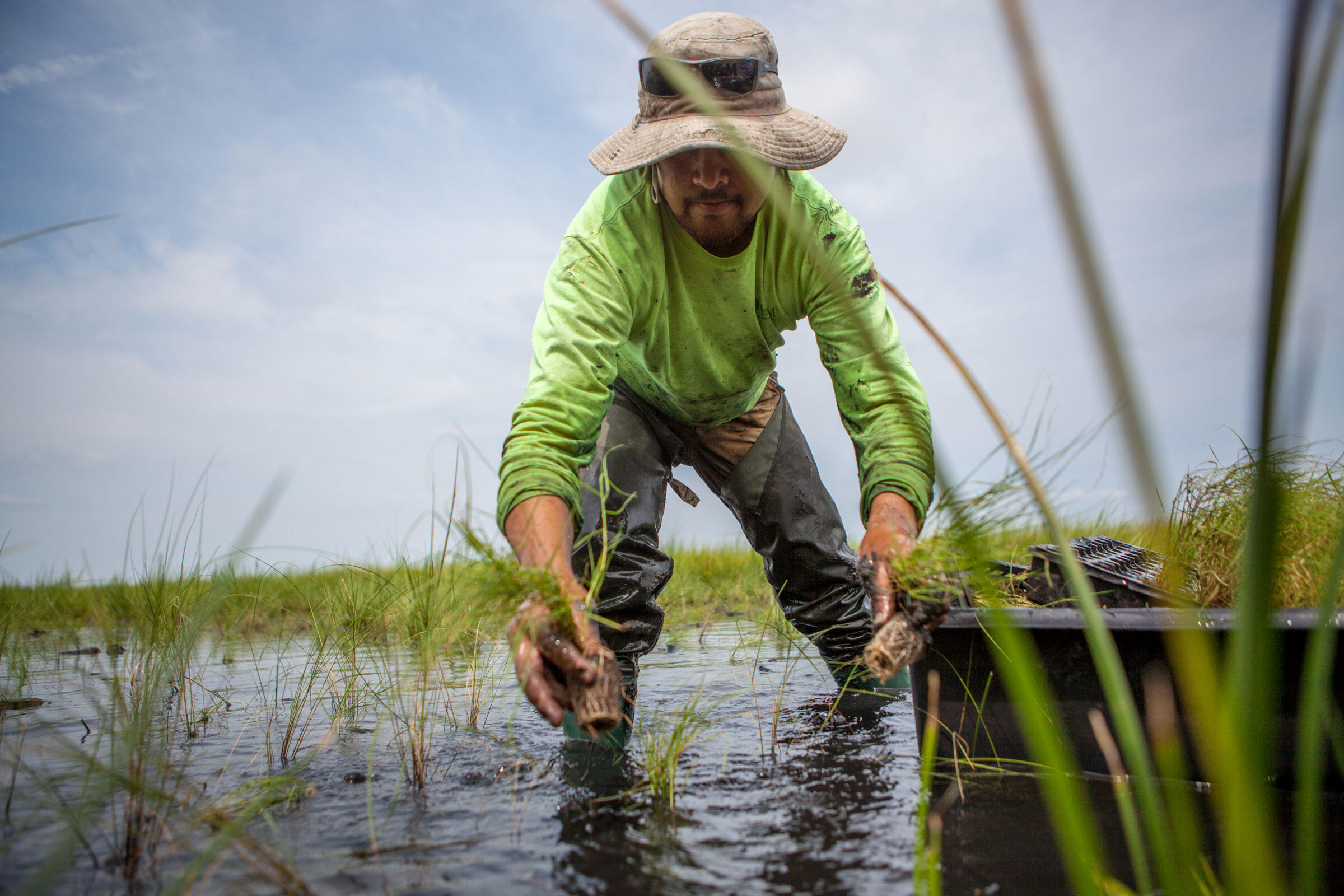 From restoring bird habitats across the country to preventing unnecessary bird deaths, Audubon's had a big year.

This year, U.S. environmental policy on a national scale cannot be described as progress. But don't despair: In states and towns across the country, Audubon has continued to do pivotal work at a local level to protect habitats and implement policies to help birds. Taken together, they show how many small actions can add up into significant progress.

Here, in no particular order, are nine of Audubon's biggest conservation successes this year—but a small slice of the impactful work being done by the network across the country.

On July 27, at Blackwater National Wildlife Refuge in Cambridge, Maryland, landscapers planted 213,000 clumps of marsh grass, marking the completion of the first in a series of experiments to save the Chesapeake Bay’s salt marshes. The $1.1-million project, funded by a Hurricane Sandy Coastal Resilience Grant from the National Fish and Wildlife Foundation, will restore marsh that’s flooding as sea level rises. It’s the effort of a coalition of governmental and non-profit scientific groups, led by Audubon Maryland-DC, and its measure of success will be the presence of marsh-breeding birds, like Black Rails and Saltmarsh Sparrows, in the restored area.

In October, the United States and Mexico updated a treaty on how water is managed across their shared border—and it designated 210,000 acre-feet (over 68 billion gallons) of Colorado River water for environmental purposes. Audubon was actively involved in the negotiations, and the output will be released over the course of nine years to restore parched riparian habitat for the Yellow-billed Cuckoo, Bell’s Vireo, Yellow-breasted Chat, and other birds.

Even as national climate policy was overturned and undermined, this year Audubon North Carolina saw a chance to effect change at a local level by supporting a solar-energy bill that would double the state’s large-scale solar and make rooftop solar more affordable. Audubon members called and emailed officials in support, and in July it was made law. Elsewhere in the country, Audubon advocates in California helped ensure the reauthorization of the state’s cap-and-trade program until 2030, which will cut California’s carbon pollution by 40 percent. Also this year, a solar-boosting order from the Arkansas Public Service Commission made over 100 references to Audubon Arkansas’s arguments in favor of expanding renewable energy access in the state.

Piping Plovers Nest in Pennsylvania for the First Time in Decades

This summer, for the first time since the 1950s, Piping Plovers nested in Pennsylvania, at Presque Isle State Park, an Important Bird Area on the shore of Lake Erie. And not just one pair, but two! The nesting was celebrated by Audubon Pennsylvania, which has worked with partners for years to monitor the beach and remove invasive plants. The eggs did not hatch on the beach, however; a storm flooded the nests in June. Luckily, the eggs were rescued and hatched in captivity, and the fledglings were released along Lake Michigan in August. In November, one of the chicks was spotted in Florida, having successfully completed its first southward migration.

Lights Out for a Building in Texas

In May, tragedy struck the 32-story American National Insurance skyscraper in Galveston, Texas: In one night, nearly 400 warblers, grosbeaks, and other songbirds (25 species total) were lured in by its dazzling spotlights and killed. The following week, after meeting with representatives from Houston Audubon and the Galveston County Audubon Group, the senior vice president of American National Insurance announced that the building would turn off its floodlights for the rest of the season, preventing the deaths of birds migrating through the city after long flights across the Gulf of Mexico.

California’s Salton Sea is an Important Bird Area that provides essential habitat for 400 bird species along the Pacific Flyway. But it’s shrinking rapidly due to human water use, which both eliminates tens of thousands of acres of bird habitat and degrades air quality as dust is blown from the exposed seabed. This September, Audubon helped pass a bill in the California legislature to commit $200 million to restoration projects at the Salton Sea. And in November, the state’s Water Resources Control Board committed to restoring 29,000 acres, half of which will be bird habitat, over the next 10 years.

The wreckage left behind when Hurricane Katrina struck Louisiana in 2005 added urgency to the long-time problem of the state’s deteriorating coastline. Since then, hundreds of scientists have contributed to the Louisiana Coastal Master Plan, and Audubon Louisiana has been there every step of the way to advise on large-scale restoration projects and advocate for the work. This June, an update to the 50-year $50-billion plan—which would add or maintain 802 square miles of coastal land and wetlands—was passed by the state legislature unanimously. The work will better protect the state from hurricanes, boost fisheries, and provide important habitat for birds and other wildlife.

Over 250,000 Acres Certified as Bird-Friendly Ranchland

Native grasslands are perhaps the most imperiled habitat in the U.S., between paving and agriculture and loss of bisons’ tramping hooves, which once shaped a diversity of native grasses ideal for nesting birds. Cattle are no bison, but ranchers can adopt healthy grazing practices that imitate bison—and, if they do, they can get their land certified by Audubon. In 2017, 13 ranches totaling 261,215 acres were certified, allowing ranchers to use Audubon’s “Grazed on Bird-Friendly Land” label on any meat produced and sell it on a premium market for an extra 50 cents to $2 per pound.

Since early 2015, Audubon California has fought to prevent the expansion of an oyster farm in Humboldt Bay, a global and state Important Bird Area that hosts 50 bird species migrating along the west coast. The oyster farm, as proposed, would have damaged eelgrass beds, which nurture young fish and are critical for Pacific Black Brant. This year, after Audubon California sent in thousands of comment letters and even filed a lawsuit against the Humboldt Harbor District, the fight was finally won: In June, the California Coastal Commission denied a permit for the oyster farm expansion, and in September the commission approved a plan to reduce the current farm from 300 to 279 acres to protect valuable habitat.