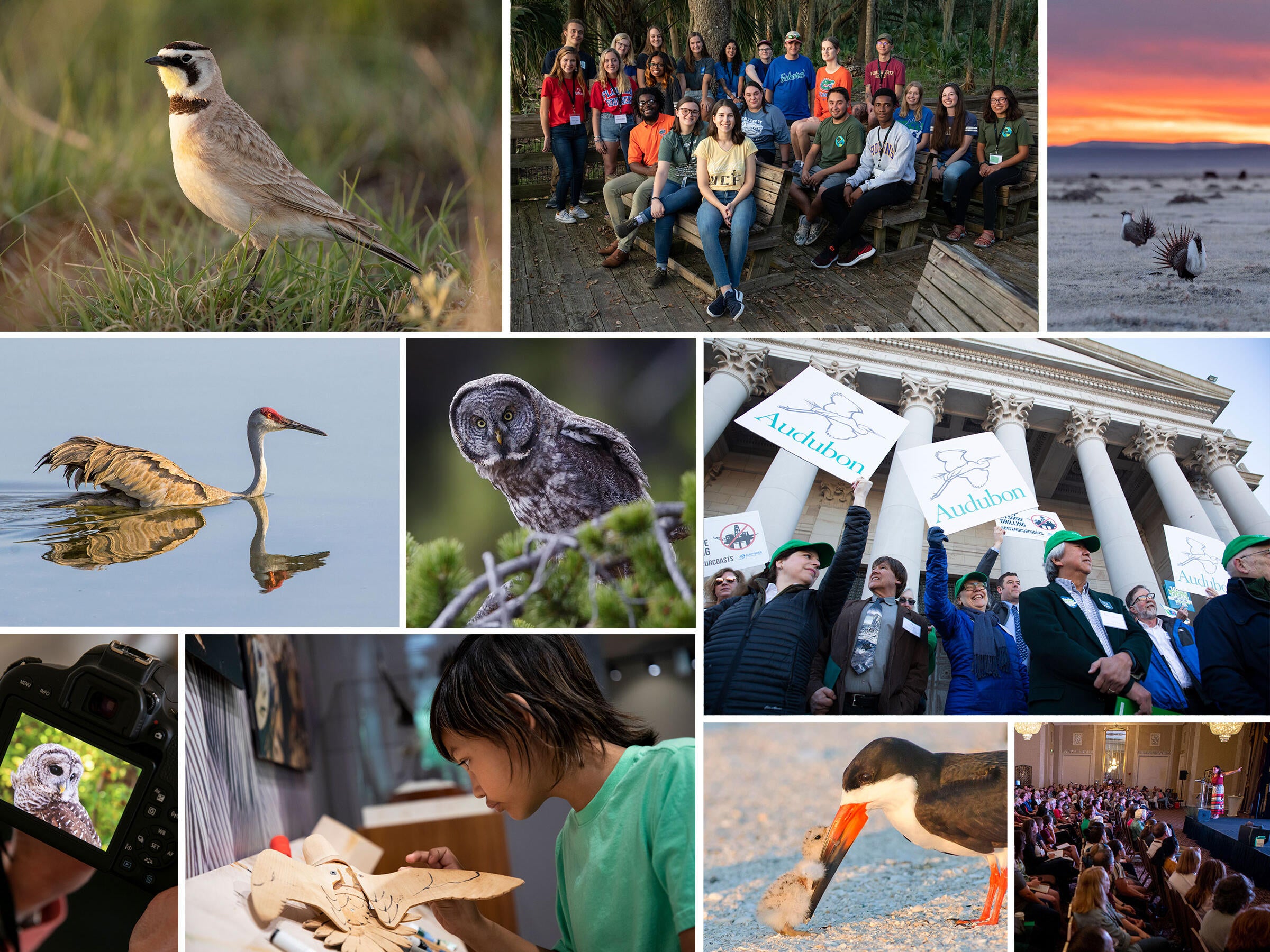 Top Audubon Wins for Birds in 2019

Audubon members took more than half a million actions to promote vital climate policies and protect birds and the places they need. 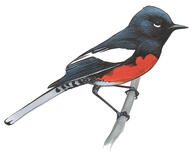 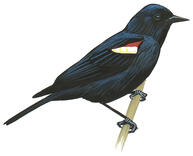 This year our conservation leaders, bird advocates, college students, ambassadors, volunteers, and scientists accomplished amazing things. Collectively, almost 150,000 of us took more than 600,000 online actions on behalf of birds. All of the accomplishments listed below come from the hard work and dedication of our members, chapters, volunteers and staff.  We're very proud of what we have been able to accomplish together over the past 12 months.

Keep reading to see the most important ways that our flock worked together this year.

Chapter members, college students, volunteers, and Audubon Ambassadors across our network were vitally important in securing four clean energy wins in six months. In Washington, Arkansas, South Carolina, and New York, elected representatives and state senators listened to constituents and ensured a healthier future for their states and birds.

Arkansas and South Carolina have become clean energy leaders in the South. The passage of the Solar Access Act in Arkansas and the Energy Freedom Act in South Carolina will expand access to solar energy and create more green jobs in these two states. And In Washington and New York, constituents celebrated the passage of two of the strongest pieces of climate legislation in the country: the 100 Percent Clean Energy Standard and the New York Climate Leadership and Community Protection Act. These laws say that the states must create a 100 percent clean energy economy by 2045 (Washington) and by 2050 (New York).

2. We Released a New Study on How Climate Change Will Affect Birds: Survival by Degrees: 389 Bird Species on the Brink

Audubon scientists studied 604 North American bird species using 140 million bird records, including observational data from birders across the country. Audubon’s new science shows that two-thirds of North American bird species are at risk of extinction from climate change. The report also features new online tools, like the first-of-its kind “Birds and Climate Visualizer.” By using this tool, people can find threatened birds in their zip codes, which personalizes and localizes the issue of climate change. The good news, according to Survival by Degrees, is that if we take action, we can help improve the future for 76 percent of the species at risk. In conjunction with the report, we published a special issue dedicated to climate solutions, including a climate action guide that anyone can implement.

3. We Acted Locally to Save Birds

Piping Plovers Breed in Chicago for the First Time in 70 Years
For the first time since the mid 1950s, Piping Plovers successfully nested and fledged their young in Chicago. Local birders monitored the nest 24/7 and made sure the pair was safe on Montrose Beach. Although the first clutch of eggs had to be relocated due to high lake levels and ultimately failed in incubation, the story didn’t end there. Thanks to the efforts of more than 70 volunteers and quick mobilization of the birding community in Chicago, two chicks from the second clutch fledged and both parents and chicks flew south for the winter in August. The success of the Piping Plover pair was due, in part, to the beach restoration activities of the Chicago Park District and dedicated volunteers, as well as partner organizations in the city and region, and a series of successful advocacy campaigns.

4. We Partnered With Big Brands Like Canon and Allbirds

The theme for Earth Day 2019 was “Protect Our Species.” To that end, we partnered with Allbirds, a sustainable shoe brand, to create a limited-edition collection of sneakers inspired by five climate affected birds: Painted Redstart, Pygmy Nuthatch, Scarlet Tanager, Mountain Bluebird, and Allen’s Hummingbird. These species were featured in Audubon’s 2014 Birds and Climate Report. Each shoe design sold out quickly, indicating that there’s appetite for bird-related eco-conscious fashion among people who may never consider themselves birders.

Audubon has also teamed up with Canon U.S.A. to co-host “Birds in Focus” events. Across the country, from events like the Hummingbird Migration and Nature Celebration in Mississippi to the Fall Festival and Hawk Watch in Connecticut, thousands of bird enthusiasts, photographers, and community members flocked to “Birds in Focus” to see examples from the Audubon Photography Awards, test industry-leading photographry equipment, and see birdlife at its most elegant. Our partnerships with Canon U.S.A. and Allbirds represent our efforts to align with like-minded partners as a way to engage new audiences and get more people invested in protecting birds.

Finally, we partnered with augmented-reality innovators Krikey to launch the Wingspan app game.

Drought Contingency Plan Will Help Protect 36 Million People and 400 Species of Birds
In April, Congress passed the Drought Contingency Plan, landmark legislation that addresses impending water shortages on the Colorado River. As temperatures continue to rise and the West becomes increasingly arid, the Colorado River Basin will become an even more important resource for economies and cities in the basin, as well as the millions of acres of farmland and birds like the Southwestern Willow Flycatcher and Yellow Warbler. Audubon worked strategically throughout the basin to build coalitions, engage bird-friendly businesses, create beer collaborations, and forge relationships with local, state and federal leaders. As the new plan is implemented, Audubon will continue to work with the Bureau of Reclamation, the basin states, and our partners in Mexico.

Utah Legislature Unanimously Passes Resolution to Ensure Adequate Water Flow to Great Salt Lake and Wetlands
A resolution adopted unanimously by the Utah Legislature and signed by Utah Governor Gary Herbert recognizes the critical importance of ensuring adequate water flows to Great Salt Lake and its wetlands. The resolution sets the stage for a collaborative process among a wide range of stakeholders to develop policy recommendations and other solutions for maintaining a healthy and sustainable lake system.

Drying lake systems in the West and around the globe have produced devastating effects, leaving many communities with limited and costly options for mitigating the negative impacts from dust, harm to birds and other wildlife habitats, and loss of livelihoods. The resolution acknowledges that the best way Utahns can prepare to avoid such serious challenges is by taking steps now. Audubon was actively engaged in supporting this resolution, along with a wide range of third-party interests, including the brine shrimp industry, mineral industry, publicly owned wastewater treatment operations, the hunting and recreation community, and conservation groups.

This legislative session, Audubon Arizona advocated for (or in some cases, against) several bills directly by testifying in committees, talking directly with lawmakers, and engaging partner organizations. Audubon’s multi-state grassroots effort to protect rivers like the Colorado River and its tributaries, the Western Rivers Action Network, sent more than 3,000 letters and e-mails to state and federal lawmakers to let them know we support actions that protect precious water resources and the habitat birds need.

Migratory Birds Gained Vital Protections in California
Amidst rollbacks and a new governmental interpretation of the Migratory Bird Treaty Act, the state of California has been a champion in demonstrating that it can protect vulnerable bird species while enjoying a thriving economy. In September, California Governor Gavin Newsom signed AB 454, an Audubon-sponsored bill protecting California’s migratory birds. The bill, authored by Assembly Member Ash Kalra (D-San Jose), strengthens the state’s protections for migratory birds and closes loopholes by where California law defers to federal law.

We Continued to Defend the Migratory Bird Treaty Act in Court
In 2018, we filed a federal lawsuit along with the American Bird Conservancy, National Resources Defense Council, Defenders of Wildlife, and the Center for Biological Diversity. In addition, eight state Attorney Generals also filed suit to defend the MBTA. After we filed the lawsuit, the government tried to get the case dismissed. This past summer the U.S. District Court in New York ruled that the cases should proceed and be consolidated. The next few months will be crucial as the coalition files a motion for summary judgment, which means we’re asking the court to find in our favor and reinstate the prior interpretation of the MBTA.

Audubon Scientists Identify Priority Conservation Areas for Disappearing North American Grasslands Birds
The North American Grasslands & Birds Report is a comprehensive analysis of climate change vulnerabilities and land-use threats facing grassland bird species. According to the report, 42 percent of grassland bird species that depend on tallgrass, mixed grass, and shortgrass prairies in the United States, Canada, and Mexico are highly vulnerable to climate change under current carbon emissions rates. The report also identifies “climate strongholds” in North America. These areas that will provide the best habitat for declining grassland birds and provide Audubon a conservation strategy to protect these species and the places they need in a fragmented and climate-vulnerable landscape.

Conservation Groups Oppose Arctic Drilling and Seek Permanent Protections for the Arctic National Wildlife Refuge
For years, Audubon has fought to safeguard the Arctic Refuge, a vital nursery to millions of birds from all 50 states, from destructive oil and gas development. In March, 312 scientists sent a letter to the U.S. Department of the Interior opposing oil and gas leasing in the Refuge. Additionally, members from conservation groups like Audubon Alaska, Alaska Wilderness League, and the Association of Retired U.S. Fish and Wildlife Service Employees worked together to pen a 431 page critique of the Bureau of Land Management’s Environmental Impact Statement, and more than 41,000 Audubon members sent in comments opposing lease sales in the Refuge.

On September 11, the members of the U.S. Senate introduced the Arctic Refuge Protection Act that, if passed, would designate the Arctic National Wildlife Refuge Coastal Plain a wilderness area, preventing any oil or gas drilling in the area. The U.S. House of Representatives followed suit the following day with the Arctic Cultural and Coastal Protection Act, which would repeal the leasing program and prohibit the Bureau of Ocean Energy Management from allowing drilling along the Coastal Plain of the Arctic National Wildlife Refuge. Both bills are major steps toward protecting the Refuge.

Audubon and Coalition Partners Fight to Protect Greater Sage-Grouse and a Threatened Western Landscape
In March, the Department of the Interior and Bureau of Land Management chose to make dramatic changes to the 2015 sagebrush management plans agreed upon by more than 10 states in the Interior West, making it even easier for oil and gas companies to lease and drill in sage-grouse habitat. While a court has put these new plans on hold, Audubon is continuing to fight back against the ongoing threats to Greater Sage-Grouse and their habitat. Upon closer inspection, Audubon, along with the National Wildlife Federation and the Wilderness Society, found that the Department of the Interior failed to prioritize oil and gas leasing and drilling outside sage-grouse habitat, as the 2015 and 2019 sagebrush management plans mandate. Between January 2017 and March 2019, the Bureau of Land Management issued leases comprising almost 1.6 million acres and 2,553 drilling permits in sage-grouse habitat.

Despite these challenges, the state of Wyoming, <a href="ht